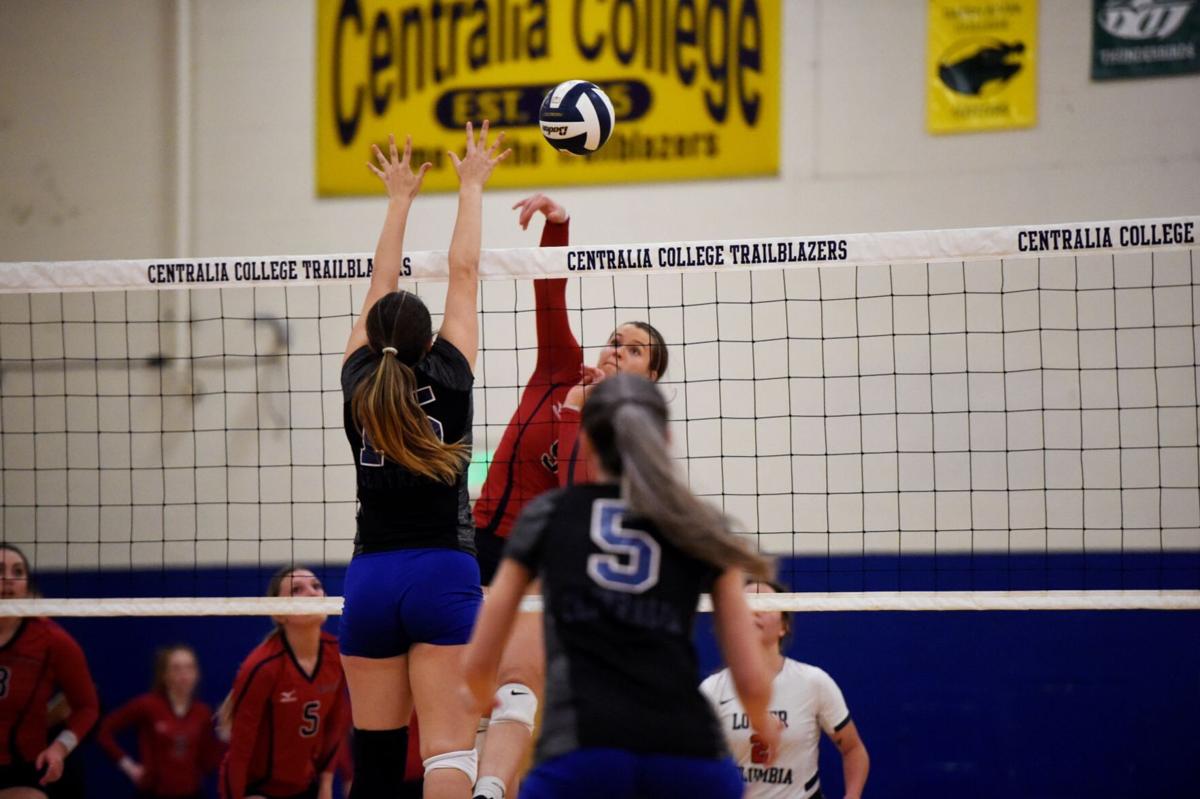 LCC's Zoe Naugle hits into the Centralia College defense during an NWAC volleyball game at Centralia on Thursday, May 6. Naugle finished with 12 kills and six blocks in a four set win. 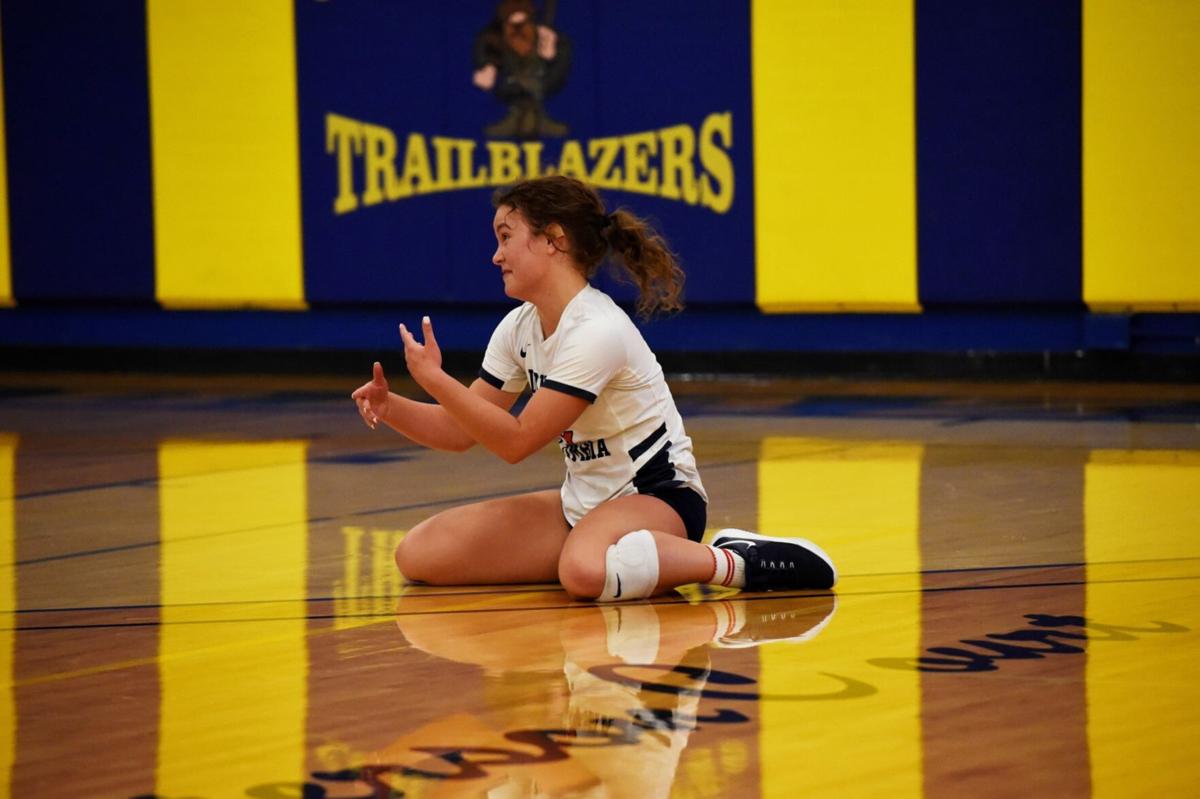 Emma Nelson looks toward her teammates on the LCC bench after coming up short on a diving dig attempt during an NWAC volleyball match at Centralia on Thursday, May 6. The Red Devils were able to earn the road win in four sets. 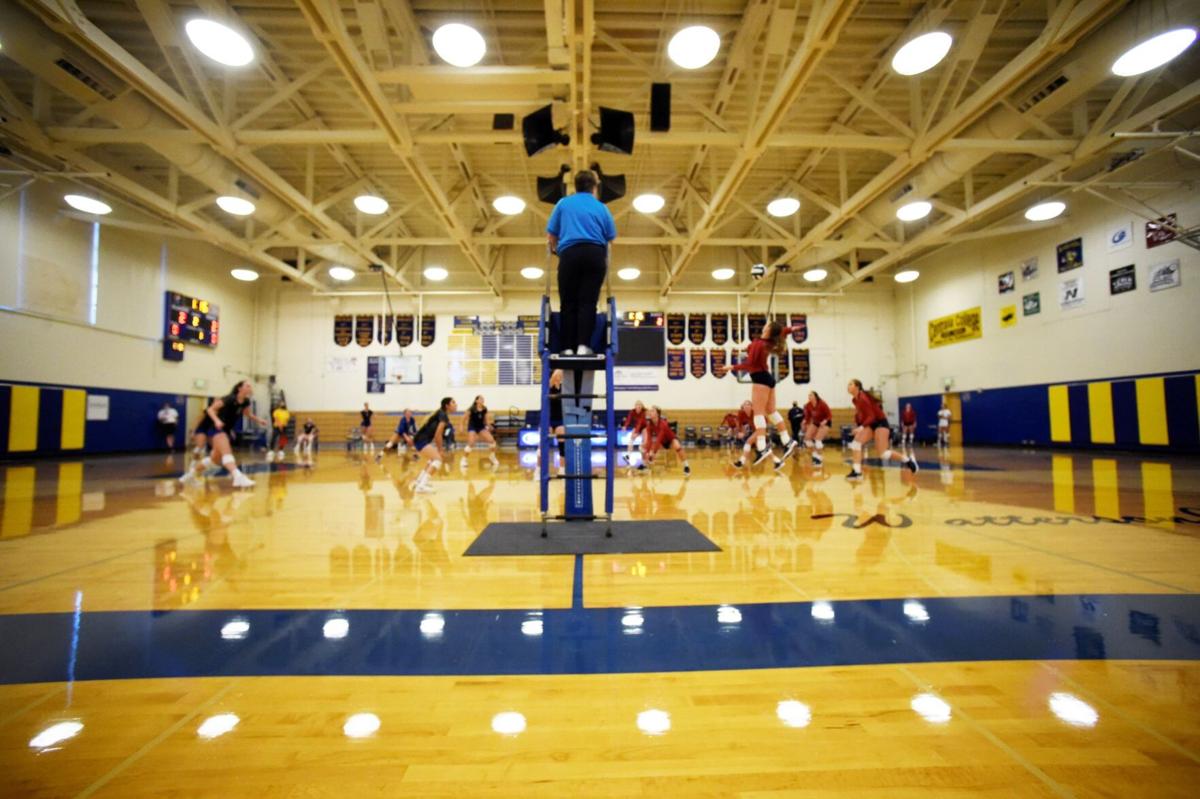 A Lower Columbia Red Devil goes up to hit during an NWAC volleyball match at Centralia College on May 6. LCC won in four sets.

CENTRALIA — In a season where most coaches and players have complained about the emptiness and relative silence of gymnasiums due to COVID-19 safety protocols and limitations on attendance Thursday was an outlier. With LCC in town for some NWAC volleyball action, the Trailblazers faithful did their best to bring the ruckus.

Sure, the stands were still sparsely populated, and most cheers were muffled behind masks, but the fans that did make it inside made sure they were heard one way or the other. That rabble rousing and interactive fanaticism reached a fever pitch in the fourth set when the home crowd tried to induce a comeback from their favorite netters by launching into a lively rendition of Queen’s “We Will Rock You” — complete with foot stomping percussion and lead vocals that echoed off of empty bleachers.

The first two sets were a demonstration in two steps forward, one step backward, offensive strategy. For instance, after falling behind early in the first set Lower Columbia battled back to tie the game up at 15 before surrendering another point. They followed that pattern to tie the score up again at 16, and then 17, and then 18 and 19 before finally taking the lead at 20-19.

That’s the sort of night it was for the Red Devils, who had already defeated the Blazers twice in the year prior to their most recent trip to the Hub City.

“They just had a lot of energy tonight with their crowd and everything,” LCC middle hitter Zoe Naugle. “Their hitters were hitting around our block and we weren’t on our A-game consistently.”

Naugle, a Castle Rock alum, finished the game with a dozen kills and a half dozen blocks, but there were plenty of other faces from around the area putting in work for the Trailblazers, too.

Eryn Duryea, of Onalaska, put up 15 assists and served 17 of 19 while landing 10 kills and playing solid defense in the middle for Centralia. Fellow former Logger, Olivia Mitten, added seven kills and hit .238 at the net. Meanwhile, Mossyrock fans had Andee Nelson (17 assists, 15 kills, 13 of 14 serving), and Faith Mulligan (five assist, 21 digs, 14 of 14 serving) to cheer for.

“Faith Mulligan, our libero, she’s just awesome. She saves our ass all day long, I mean, I can’t even count. She’s just all over the place,” Centralia coach Susan Gordon said.

After dropping to close sets to start the day, the Blazers got one back in the third set with Nelson setting the ball up high and soft and Duryea following up with power shots on the downward slice.

“They’re just now getting comfortable with their positions and they’re just buying into the fact that we’ve got to work to prove to people this season,” Gordon said. “We’re just getting better every time out. We just look a lot better.”

But Lower Columbia didn’t let that setback spring them out entirely. The Red Devils jumped out to a 16-11 lead before the crowd started chanting rock ballads inside Michael Smith Gymnasium, and the serenading didn’t work out as planned for the home team when LCC immediately put up seven consecutive points on the way to the match clinching win.

Kaylee Barnum led LCC with 13 kills in the match.

“Kaylee Barnum, she was having a great time so we just fed her the whole time,” Naugle said.

Karsyn Zaragoza added 27 assists for LCC and Amanda Holm dished 20 more. But it was defense that allowed the Devils to get into position to let their hitters swing big.

“Our goal was not to let them get two or three points in a row with their serve and we did pretty well with that,” Naugle explained. “We really rely on Camryn (Wilson) and Emma (Nelson) for our serve receive passes to control the back row and the tempo.”

LCC coach Carri Smith noted that the Blazers have improved mightily as the season has progressed, and the karaoke style heckling from the stands certainly didn’t hurt.

“This is the best they’ve played in the three times we’ve faced them,” Smith said. “Props to that team with their short roster to bring the fire.”

Next week LCC (8-1) is set to host Highline on Wednesday before heading up to Pierce College the following day.

After a draw against Centralia on Wednesday, the LCC soccer team finished the week on a high note with a win over Tacoma thanks to a strong of…

The LCC volleyball team took advantage of their only match this week with a strong showing against Green River. The Red Devils controlled thin…

LCC's Zoe Naugle hits into the Centralia College defense during an NWAC volleyball game at Centralia on Thursday, May 6. Naugle finished with 12 kills and six blocks in a four set win.

Emma Nelson looks toward her teammates on the LCC bench after coming up short on a diving dig attempt during an NWAC volleyball match at Centralia on Thursday, May 6. The Red Devils were able to earn the road win in four sets.

A Lower Columbia Red Devil goes up to hit during an NWAC volleyball match at Centralia College on May 6. LCC won in four sets.