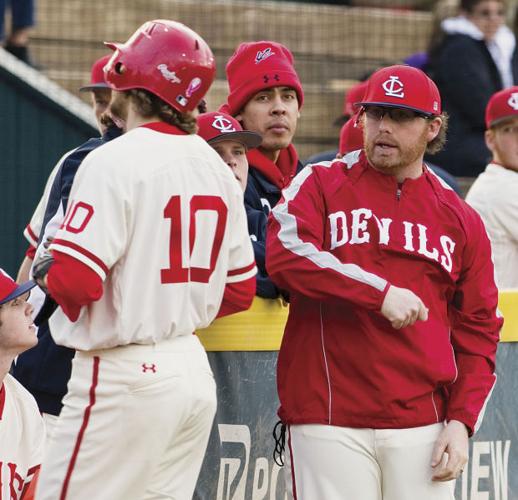 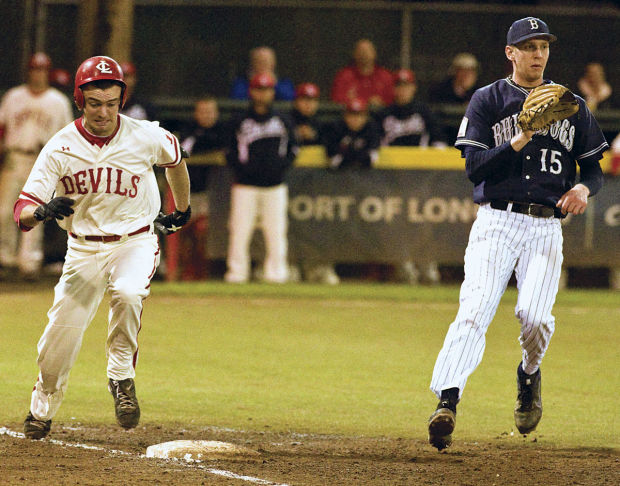 LCC's Connor Huesers beats out an infield hit in the sixth inning of Game 1, reaching the bag before Bellevue's Jake Reppert. 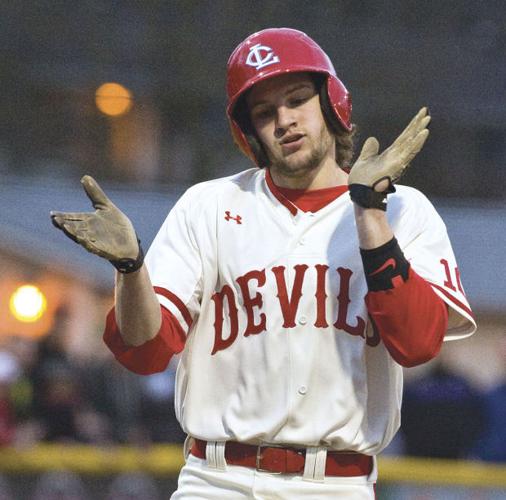 LCC's Derrick Salberg applauds as he scores the Red Devils' first run of the 2013 season in the third inning of Game 1 vs. Bellevue Friday night. 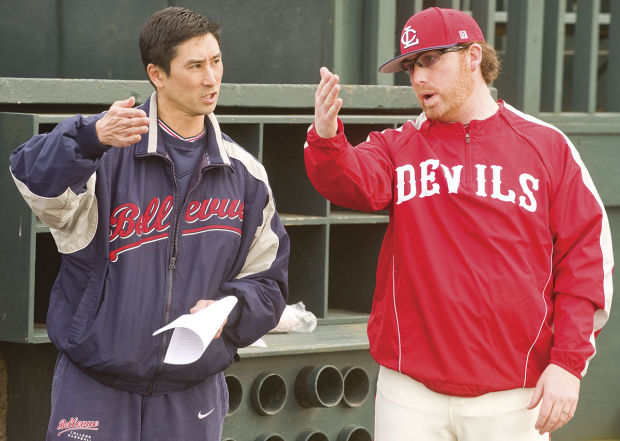 By Rick McCorkle / The Daily News

He knew it wouldn’t be easy following a legend when he was hired as baseball coach at Lower Columbia College. What made it tougher was knowing the legend was his uncle, Kelly Smith.

Tougher yet was facing a nationally ranked powerhouse, the Bellevue Bulldogs.

Fergus’ Red Devils took an early lead in their season-opener with Bellevue, but watched the Bulldogs score go-ahead runs in the sixth inning of a 4-2 setback in the opener. In the nightcap, the Bulldogs scored twice in the eighth and the game-winner in the 10th for a 3-2 triumph on Friday at David Story Field.

“In some ways it’s a little odd being back here,” Fergus said before the game. “I’m not nervous as much as uncertain. We have some guys who are holdovers from last season under Coach Smith, along with a bunch of guys I’ve brought in. Some of the newcomers are learning to play college baseball for the first time, and they’re wide-eyed and dribbling down their legs.”

Fergus is no newcomer to Longview. He served as an assistant under Smith at LCC from 2000-05 before leaving to become the head coach at Tacoma College. During his five years with the Titans, he had a 125-100 record and made four postseason appearances.

For the last two years, Fergus served as a volunteer assistant coach at Seattle University, where he also was the Redhawks’ offensive coordinator, third base coach and Director of Camps.

“I’ve been asked by the players how important this game is to me,” Fergus said. “They’re nervous and excited, and playing in front of a home crowd is great. They are also watching this game as a battle of the conference heavyweights.”

Bellevue is ranked regionally and nationally. The Bulldogs are third in the American Baseball Coaches Association — Junior College Pacific Association Pre-Season Poll, and ranked 45th on the Perfect Game.org website in its preseason top 50 Junior College teams in the US. LCC is ranked 19th in the ABCA Pacific coast poll.

“It’s another game and we’re not nervous,” LCC center fielder Derrick Salberg said. “We’re excited to have the chance to play someone other than ourselves. This is a challenge for us early to see how good we are. We have the offense and pitching to be pretty good.”

Fergus’ debut is similar to Smith’s when he took over for Steve Farrington in 1995. The Red Devils opened their season in Phoenix, Ariz. against Butler County, Kansas and dropped their first game under the new skipper 9-8 in eight innings. LCC avenged the loss with a 5-2 triumph in game two.

Smith was in attendance for Friday’s doubleheader in his new role as a Pacific Northwest scout for the San Diego Padres. The presence of the former coach added to the pressure for Fergus and the Devils to win in his LCC coaching debut.

“I knew the old red-head (Smith) would be here and wouldn’t miss this for anything,” Fergus said. “I want to beat Bellevue, but I want to do it more in May than in March. I’m very competitive, but I’m also looking at this in the big picture.

The Red Devils entertain Chemeketa in a doubleheader Saturday.

The LCC women's basketball team hung it's 2021-22 NWAC Championship banner Thursday night and then celebrated with a 91-55 win over Clark College.

NWAC Men's Basketball: Lower Columbia runs out of its shoes in win over Clark

A quick perusal of the Lower Columbia College roster for the men’s basketball team reveals lots of S’s and O’s and periods in that order. They…

Lower Columbia outscored Everett 14-4 over the final five minutes Sunday to win the Red Devil Classic for the first time in eight seasons with a 72-62 victory. Emanuel Steward led the Red Devils with 17 points in his return from an ankle injury.

The Lower Columbia women's basketball team has plans to bring another NWAC title home this season. First, they'll unfurl their 2021-22 championship banner at Myklebust Gymnasium before their home game Thursday.

LCC wins ugly on the road, gets ready to unfurl NWAC Championship banner at home on Thursday.

Lower Columbia used a 20-5 run to open the second half to key a comeback to beat Mt. Hood 81-65 on Friday night in the Red Devils Classic at Myklebust Gym.

LCC's Connor Huesers beats out an infield hit in the sixth inning of Game 1, reaching the bag before Bellevue's Jake Reppert.

LCC's Derrick Salberg applauds as he scores the Red Devils' first run of the 2013 season in the third inning of Game 1 vs. Bellevue Friday night.