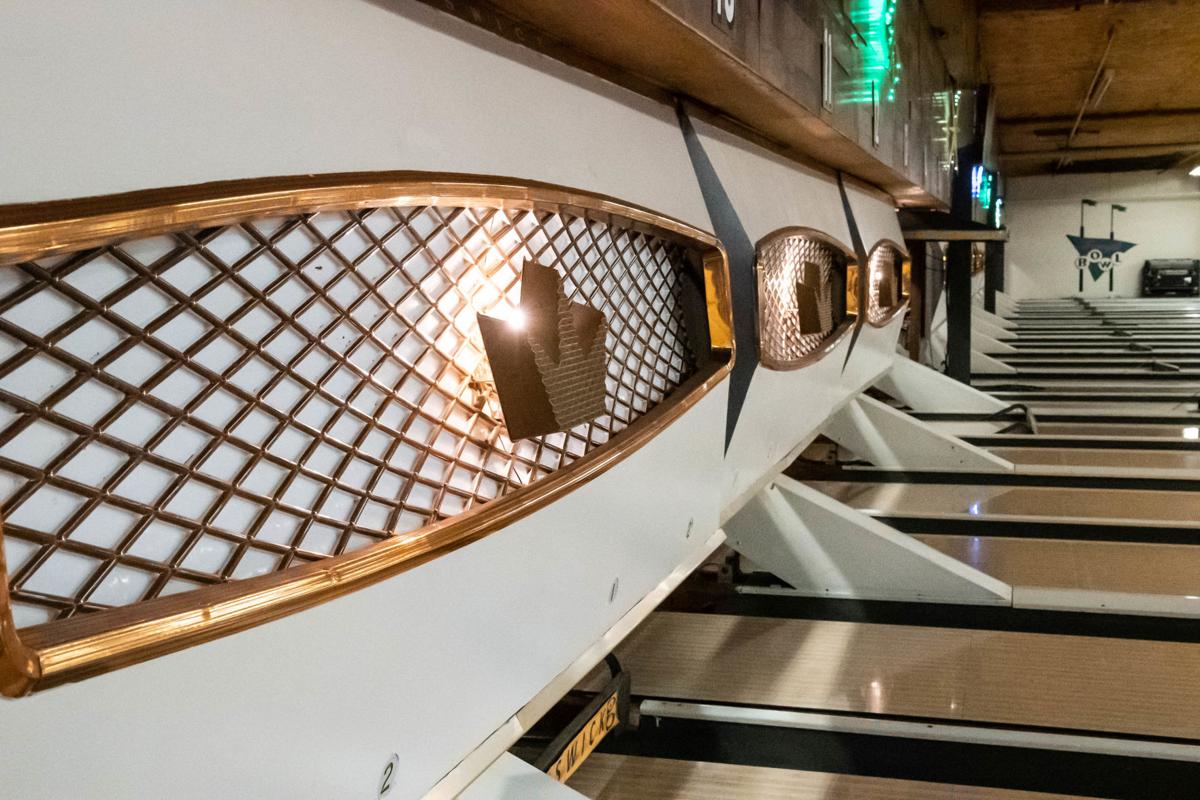 The original gold and white crown backboards have been revealed at Triangle Bowl after the previous backboards were removed, to bring back a "retro modern" feel. 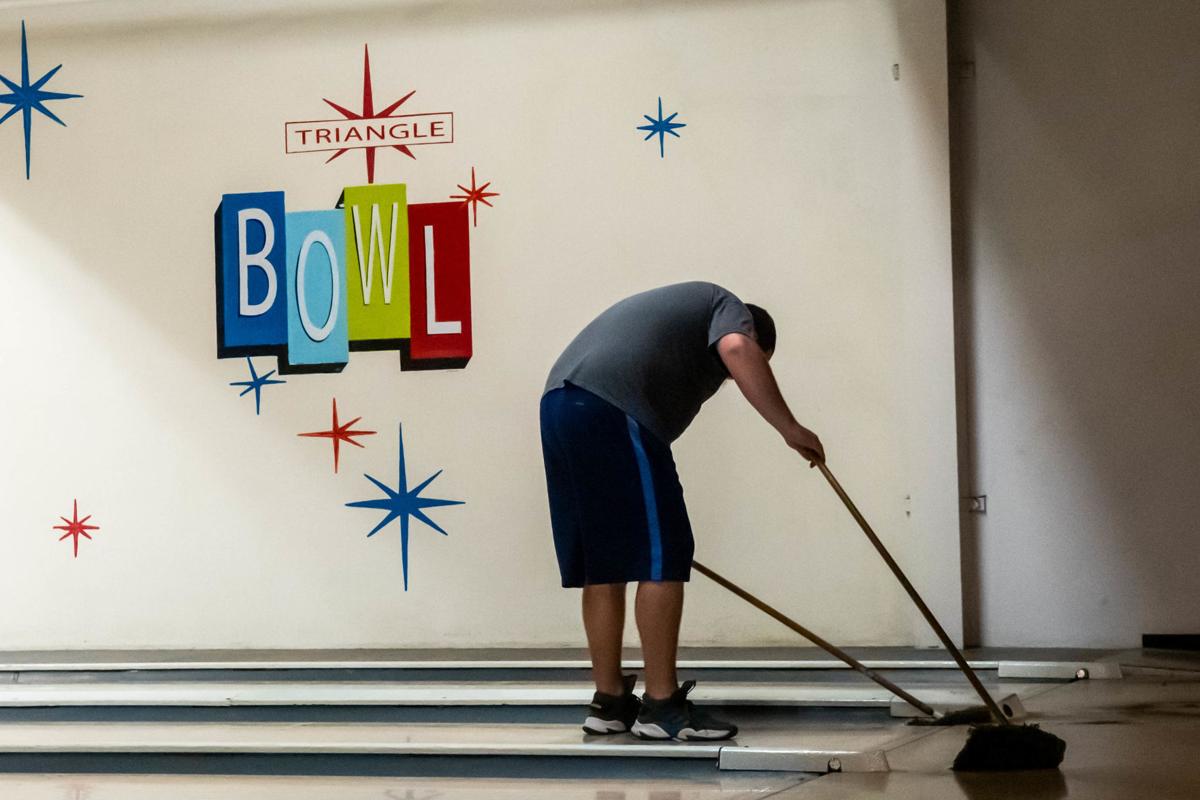 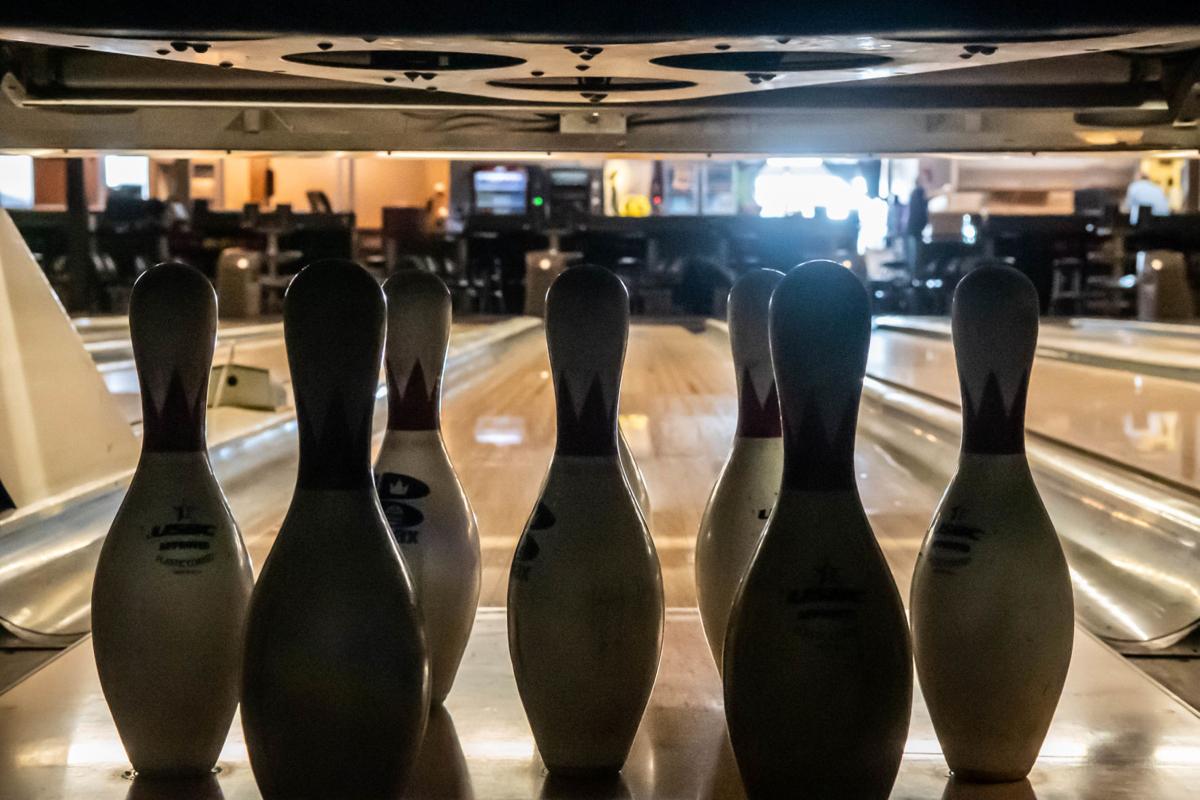 Bowling pins sit lined up and ready for bowlers to return to Triangle Bowl. The alley opens for league action Tuesday. 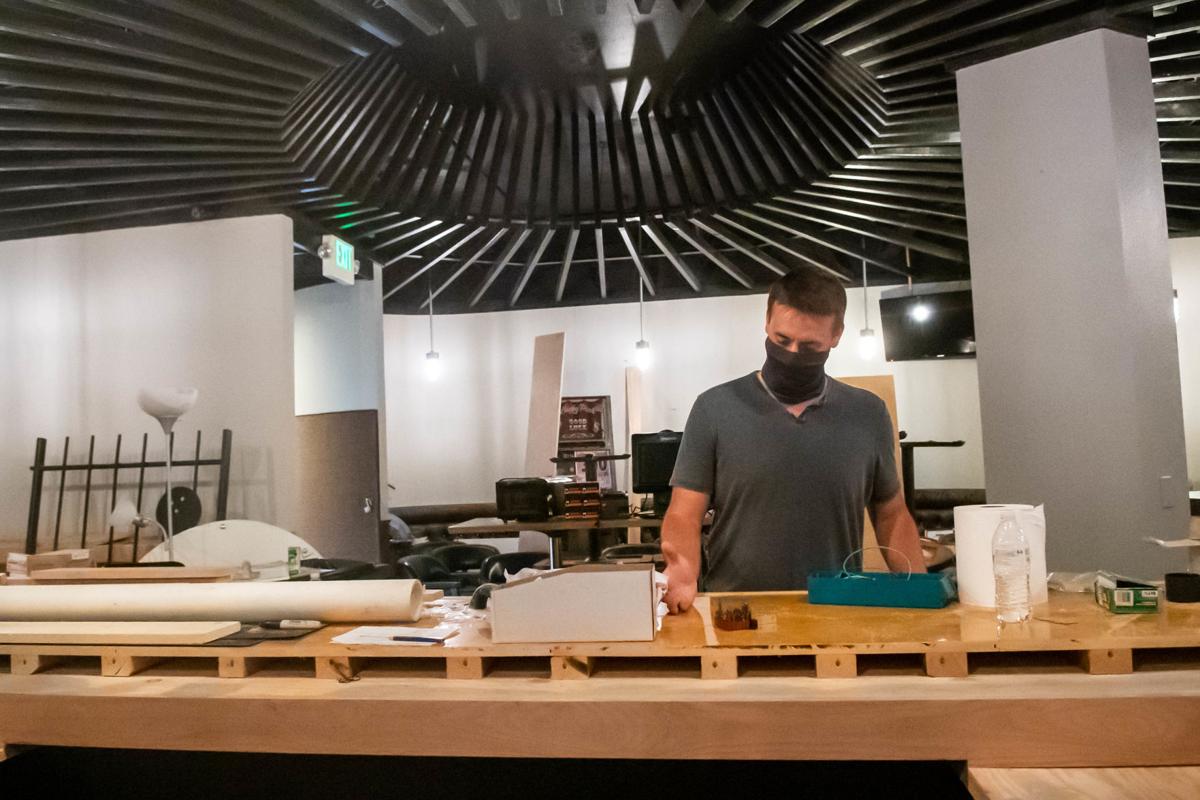 Travis Malakowsky stands in front of the bar in the Triangle Bowl lounge while showin goff the renovations in progress. The bar top is refurbished from the old Kelso High School gym floor.

When the Triangle Bowl doors slide open for the first time since March, bowlers will not be greeted with the familiar smell of lane oil, greasy food and years of mysterious stains woven into the carpet.

Instead, bowlers can expect the scent of refurbished wood, fresh carpet and barely dried paint. While many bowling alleys are polishing off the old balls now that Governor Jay Inslee has moved to allow the sport to resume, Triangle Bowl is putting a fresh spin on everything.

The long anticipated reopening of the lanes, for league play and practice only, will take place on Tuesday.

“It’s completely different. We’re kind of going for a retro modern look. The owners are all in on being here for another 50 years,” said Triangle Bowl manager and Pro Shop operator, Travis Malakowsky. “We’re ready to get the word out and say, ‘Hey, we’re ready to come back.”

Those crisp white and regal gold backboards will welcome bowlers back as they return to the alley for the first time in six months. Originally installed for the alley’s grand-opening in 1957, the backboards were covered up during a previous remodel.

“We repainted them to get them a little more retro modern. What you see above them is actually wood flooring that one of the owners put up and added the starburst there. They are cut out of the flooring and put LED lights behind them,” Malakowsky explained.

Along with a facelift in the alley, the lounge is completely redone. Familiar touches can still be found throughout the building, but Triangle also brought in something old to help make it new. Anyone from Kelso High School will recognize the new bar top, since it is a section of the Hilanders’ old gym floor.

All the renovations started quickly after the alley was first shutdown back in early March.

“The first week was culture shock and sorry nights. It felt very doomsday. But after that (the owners) just said, ‘Hey we can’t stay here and do nothing. Let’s do something.’ If you don’t evolve you perish,” Malakowsky said.

A handful of league bowlers heard about the evolving overhaul and came out to lend a hand. Tod Berridge and his wife, Doris Berridge, are two patrons with idle hands who helped with the renovations.

“I came in one day and looked around and said, ‘Holy crap they have a lot to do.’ So I asked my wife Doris, ‘Hey, you want to go down and help them?’ and she said sure,” Tod Berridge said. “It’s just who we are. The bowling alley is a big part of our life.”

The remodel slowed down when bowlers were told that alleys wouldn’t be opening until 2021. When the Governor changed course in August, the Triangle had some catching up to do for opening day.

Malakowsky said the day they heard the news about the impending reopening was filled with jubilation and lots of stress. Things were nowhere near ready to roll but with the help of loyal bowlers they were able to commit to the early September opening.

While the renovations were kept hush-hush while they were underway, Malakowsky says the Triangle crew is now ready to serve their community again.

“We’re ready, we’re chomping at the bit. We have been so honored by the community. Nothing we do will ever show the appreciation. All of that is so big and we are just floored,” Malakowsky said. “They don’t want any money, they just want to give us their time.”

As the Triangle staff prepares to reopen the doors while fulfilling the state mandates to keep bowling alleys open they are once again going to have to rely on their community of bowlers to toe the line. According to Malakowsky, Triangle Bowl plans to uphold the rules “as strict or stricter,” than needed to keep the new lights humming and the pins cracking.

Berridge acknowledged he is in the ‘at-risk’ category. He said he and his wife have been taking precautions but when it comes to bowling, they will be there on opening day, balls in hand, masks on faces.

“I don’t like wearing this (mask) but if this is the worst thing we’ve got to put up with, it ain’t too bad,” Berridge said. “Things could be a whole lot worse. It might be a couple of months, it might be a year. Nobody knows for sure. The mask ain’t so bad. You better get used to wearing a mask, it might be a while, it could be a long while. It’s the right thing to do to get this thing over.”

Malakowsky said so far people have been supportive or understanding of the new mandates. If they want to bowl, they have to follows the rules, he said. With the support shown to just help the alley reopen, Malakowsky doesn’t expect any issues.

“The bowling community is very tight. Everybody know everybody, and maybe everybody doesn’t always get along with everybody but that’s OK,” Malakowsky said. “Everybody’s willing to get through this together.”

People keep talking about the Seattle Mariners like a feel-good thing, smiling while patting the Mariners on the collective head condescending…

It seemed an impossibility, a reach, an unlikely event of the highest order.

AP Top 25 Reality Check: Big Ten back in poll, not on field

There was no way this was going to turn out anything but odd, and it's not going to get easier going forward.

Dodgers starter May hit on foot by grounder, exits early

PHOENIX (AP) — Los Angeles Dodgers starting pitcher Dustin May left Thursday night's game against the Arizona Diamondbacks after just one inning after he was hit on the left foot by a sharp grounder.

CLEVELAND (AP) — Brady Singer's bid at history turned to heartbreak in one pitch.

The original gold and white crown backboards have been revealed at Triangle Bowl after the previous backboards were removed, to bring back a "retro modern" feel.

Bowling pins sit lined up and ready for bowlers to return to Triangle Bowl. The alley opens for league action Tuesday.

Travis Malakowsky stands in front of the bar in the Triangle Bowl lounge while showin goff the renovations in progress. The bar top is refurbished from the old Kelso High School gym floor.