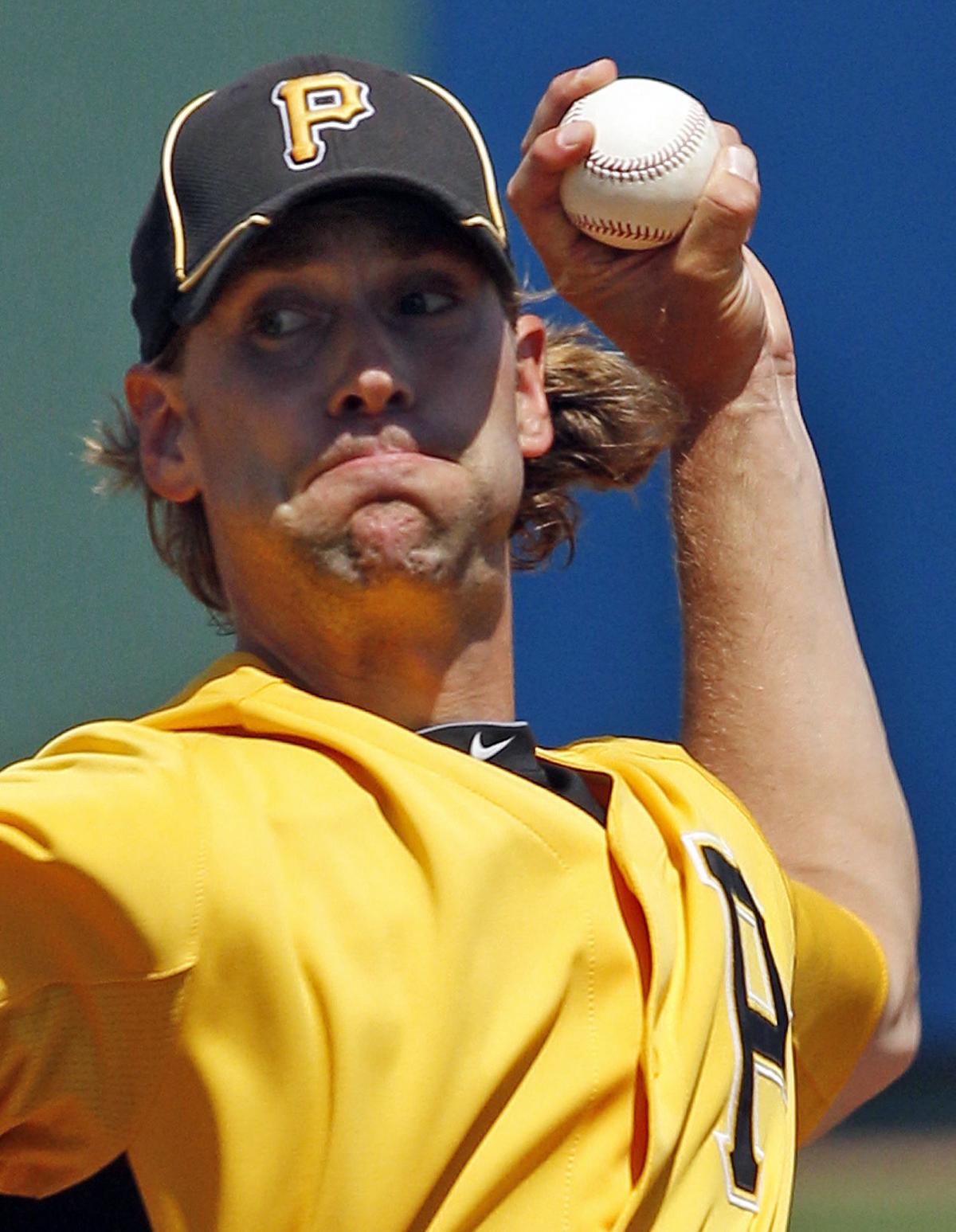 Pittsburgh Pirates pitcher Brian Burres throws during a spring training game against the Houston Astros in Bradenton, Fla., Wednesday, March 23, 2011. Burres was announced as the new manager of the Cowlitz Black Bears on Tuesday, Feb. 9. 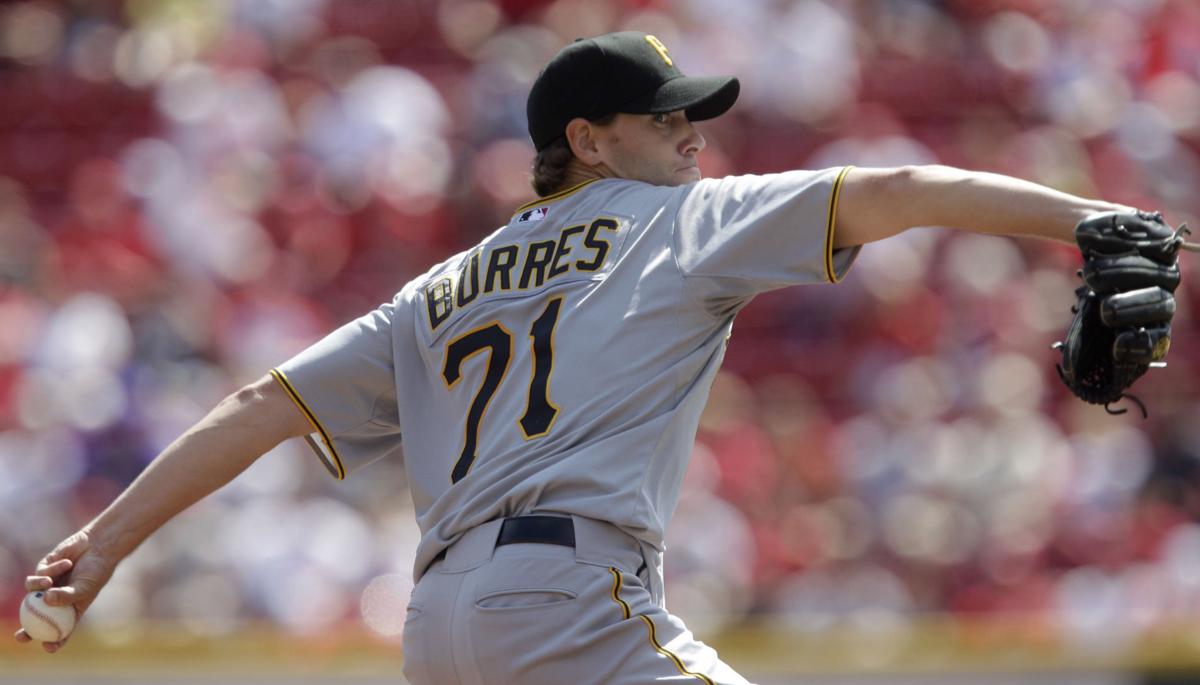 Pittsburgh Pirates starting pitcher Brian Burres throws against the Cincinnati Reds in a game, Sunday, Sept. 12, 2010, in Cincinnati. Burres, who won a NWAAC title with Mt. Hood CC in 2000, was announced as the new skipper of the Cowlitz Black Bears on Tuesday Feb. 9. 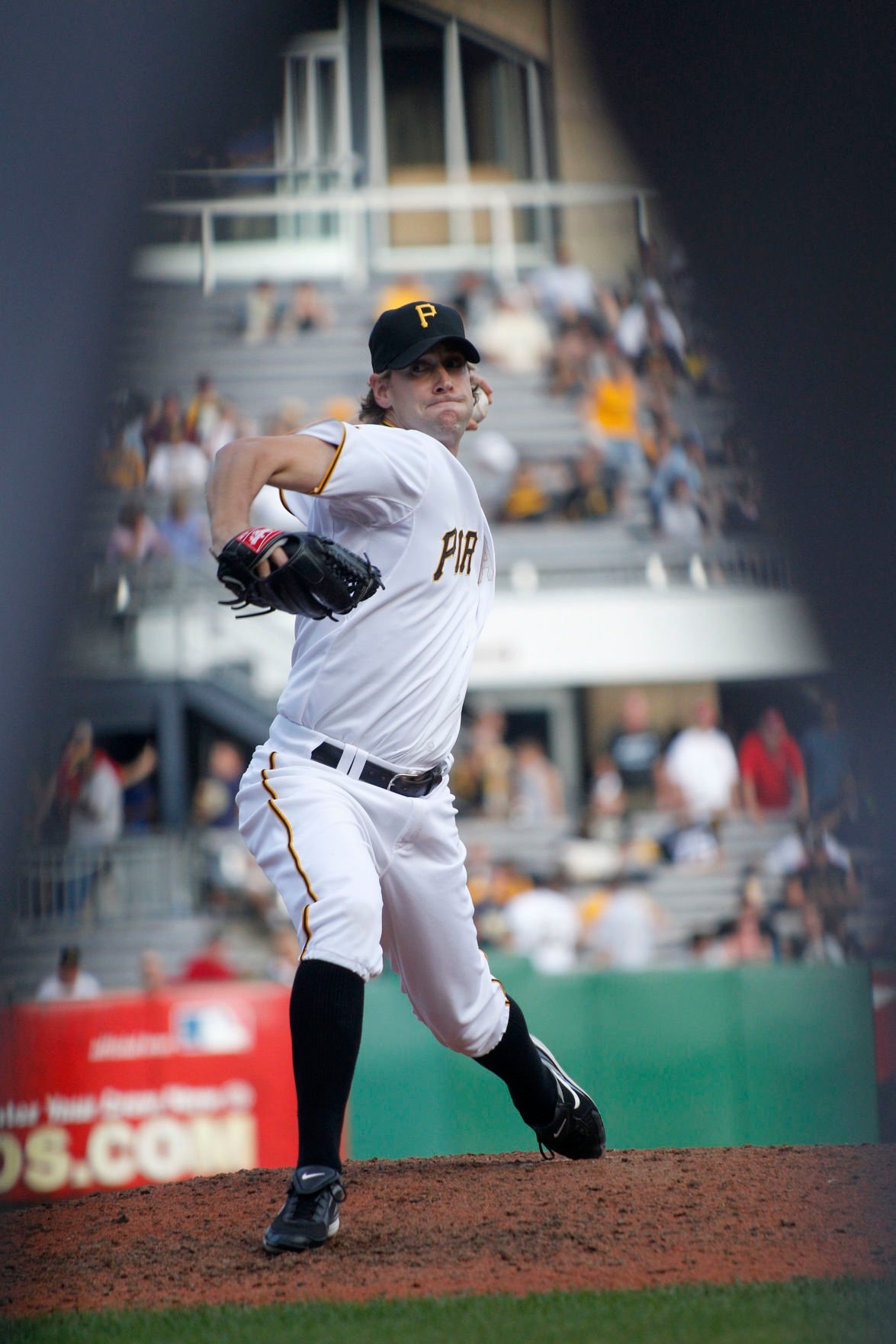 Pittsburgh Pirates relief pitcher Brian Burres pitches in a game against the Cincinnati Reds on Sunday, Sept. 25, 2011, in Pittsburgh. Burres spent six seasons in the major leagues and will now return to the dugout as manager of the Cowlitz Black Bears.

The next time Brian Burres steps on turf at David Story Field it will be as the brand new manager of the Cowlitz Black Bears. But it won’t be his first time his turf shoes have touched the playing surface tucked between Lower Columbia College and the big wooden squirrel outside the Longview Public Library.

Burress, a six-year MLB veteran, was hired by the Black Bears last week but back in 2000 he was just a southpaw trying to find his way with the Saints. That year Mt. Hood Community College found their way all the way to the NWAAC championships before becoming the darlings of the tournament by toppling the Red Devil dynasty for the title.

“We actually beat them that year. We beat them for the championship at LCC,” Burres recalled, a full score after that fateful final out had been recorded. “We got in some altercations. I’m not going to lie. We both thought our stuff didn’t stink.”

After some fact checking, at least part of that is right. The Saints did beat Lower Columbia for the championship that year, but the game was played at Wenatchee Valley.

That doesn’t mean that the memories of bad blood and trash talk echoing across David Story Field were made up. It’s just that they happened a little earlier in the season than the fog of time would lead an old ballplayer to believe.

In any case, with twenty years of separation, and a full professional baseball career, between him and that win the Black Bears new manager doesn’t think it will be weird to take over the top step in the home team dugout. In fact, after learning firsthand just how full local baseball fans can pack the stands at David Story Field, he’s got nothing but good things to say about his new home away from home.

Burres’ professional career took him away from Gresham after that title run with the Saints when the San Francisco Giants selected him with the 931 pick in the MLB Draft. From there Burres’ path meandered a bit with stops in Mexico, Venezuela and Taiwan, along with stints in the show with the Baltimore Orioles, the Toronto Blue Jays, and Pittsburgh Pirates between 2006-11.

In his new role as a skipper with the Black Bears in the West Coast League, Burres is hoping to transfer some of the knowledge he learned on the pro circuit to younger players who have hopes of finding similar success.

“I toiled away a little bit. I was the 931st pick in the 2000 draft. Probably just a roster filler kind of pick when they selected me,” Burres said. “I think that the way I had to do it is going to be very similar to the players that I’m going to have on my team. I mean, what 18, 19, 20 year old player doesn’t want to play professionally.”

That’s precisely the type of experience and influence that Black Bears general manager, Gus Farah, was hoping to find when he began his coaching search last month. That short notice search was brought on by necessity after Gary VanTol vacated the position in order to take a job managing the Boise Hawks, an independent professional team. VanTol had been hired in October, 2020 to replace longtime Cowlitz manager Grady Tweit who resigned amicably last summer due to facilitate a family move.

“We had a short list that we went through after Gary’s decision and he was on that list,” Farah said. “He’s local. He’s been through a lot of levels of minor league baseball so he understands what these kids are going through, and he’s an accomplished player to have been able to have a six year career.”

Farah readily admits that Burres’ coaching resume is as short as it is thin. With only short stints as a pitching coach with Mt. Hood CC and the Gresham GreyWolves on the back of his coaching card, Burres will likely need to do some learning of his own in the upcoming summer season.

Not that the Black Bears’ brass is worried about his ability to master the learning curve.

“Do you know the road that these kids are on? He spent years honing his craft and he didn’t give up. He’s one of those classic minor league guys who had to stick with it and it paid off. He made it,” Farah explained. “Our expectation is that we will continue to develop players when they come to Cowlitz.”

As for Burres? He’s known for a while that he’d like to try his hand at writing out the lineups. But before jumping in with both feet he went back to school to get a college degree. Then, with the COVID-19 pandemic putting most sports program’s in hibernation mode, the farthest thing from his mind last month was the possibility of life as a Black Bear.

“It wasn’t that I wasn’t searching because I didn’t want to. It was just that I didn’t think there were that many open jobs to look for,” Burres said. “But it’s something that I’ve wanted to get back into, so when this opportunity came it was something that I thought would be fun to be a part of.”

With his combined big time and bush league pedigree, there is little doubt that Burres will arrive in the city famous for squirrel bridges with a cache of next level baseball knowledge to impart on his burgeoning Black Bears roster. Still, he knows that the most important lessons will take time to impart.

“I don’t think I’m going to want to just hammer them with all the things you have to go through to learn,” Burres explained. “There’s just some things that no matter what I say to them it’s not going to mean anything until it happens to them.”

That sort of approach seems to be precisely what made Burres such an appealing choice to the Black Bears. As a summer night staple of family friendly entertainment that’s also committed to helping college players advance their long-term chances in the game, Cowlitz must straddle both sides of the chalk line as they prepare their final product for the bright lights of David Story Field, and beyond.

“He said something to me at the beginning a couple of times; ‘I want these guys to have fun this summer,’” Farah noted. “There’s going to be boundaries, but he wants them to have fun. They are going to be getting grinded in spring baseball and they are going to need to be reenergized for another 65 game season.”

The Cowlitz Black Bears are set to open their season on June 2 in Ridgefield against the Raptors.

Pittsburgh Pirates pitcher Brian Burres throws during a spring training game against the Houston Astros in Bradenton, Fla., Wednesday, March 23, 2011. Burres was announced as the new manager of the Cowlitz Black Bears on Tuesday, Feb. 9.

Pittsburgh Pirates starting pitcher Brian Burres throws against the Cincinnati Reds in a game, Sunday, Sept. 12, 2010, in Cincinnati. Burres, who won a NWAAC title with Mt. Hood CC in 2000, was announced as the new skipper of the Cowlitz Black Bears on Tuesday Feb. 9.

Pittsburgh Pirates relief pitcher Brian Burres pitches in a game against the Cincinnati Reds on Sunday, Sept. 25, 2011, in Pittsburgh. Burres spent six seasons in the major leagues and will now return to the dugout as manager of the Cowlitz Black Bears.