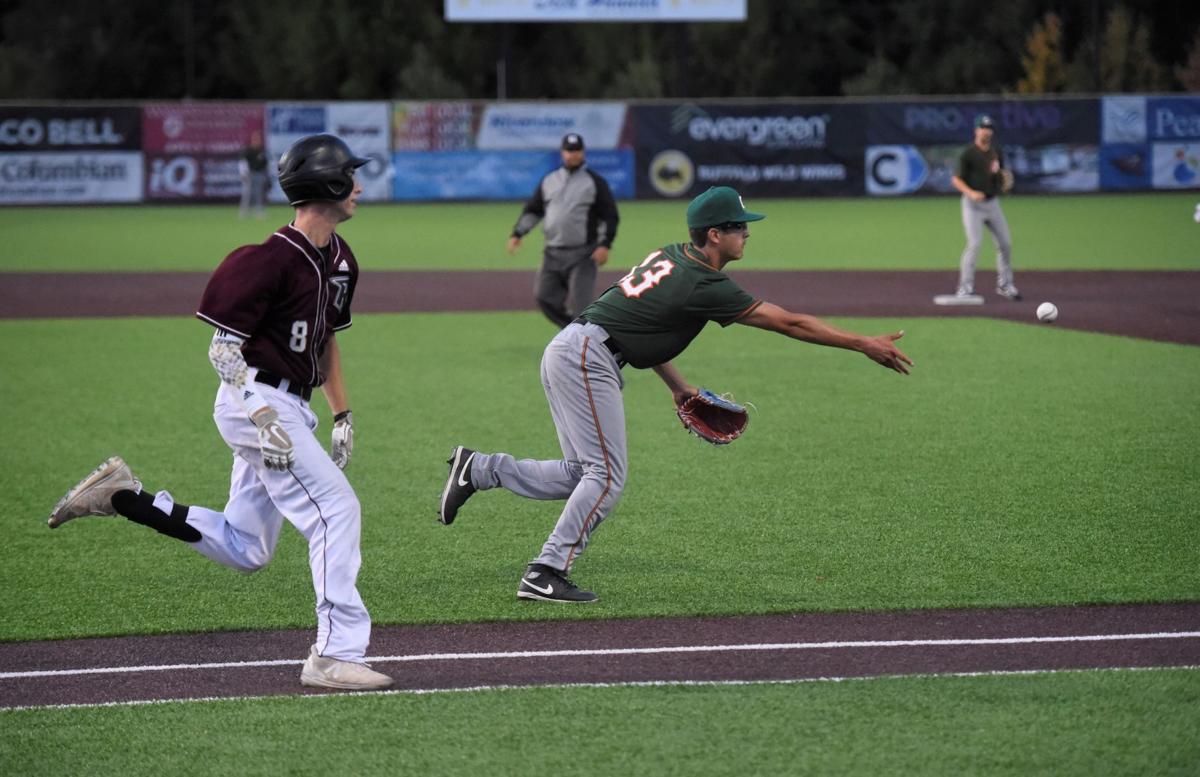 Cowlitz pitcher Sawyer Parkin flips the ball to first after fielding a bunt by Ridgefield's Brooks Dyer on Thursday, August 5, in Ridgefield. 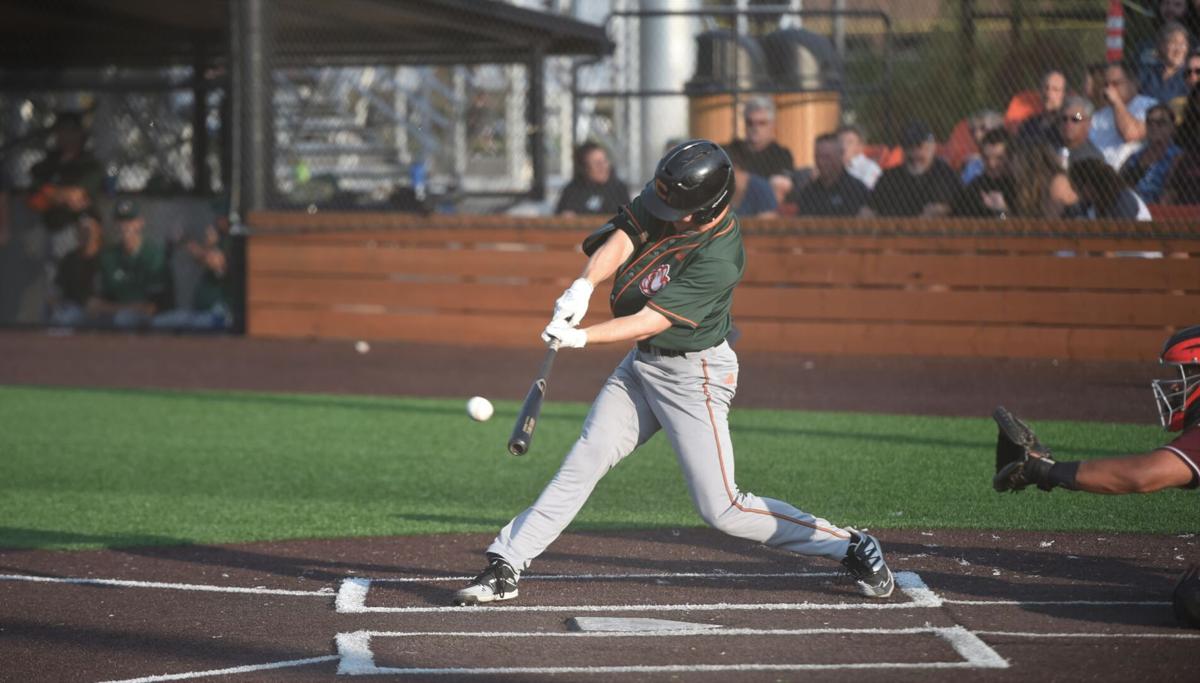 Cowlitz' Jacob Stinson laces an RBI triple to the gap in right center field against the Ridgefield Raptors on Thursday, August 5, in Ridgefield. 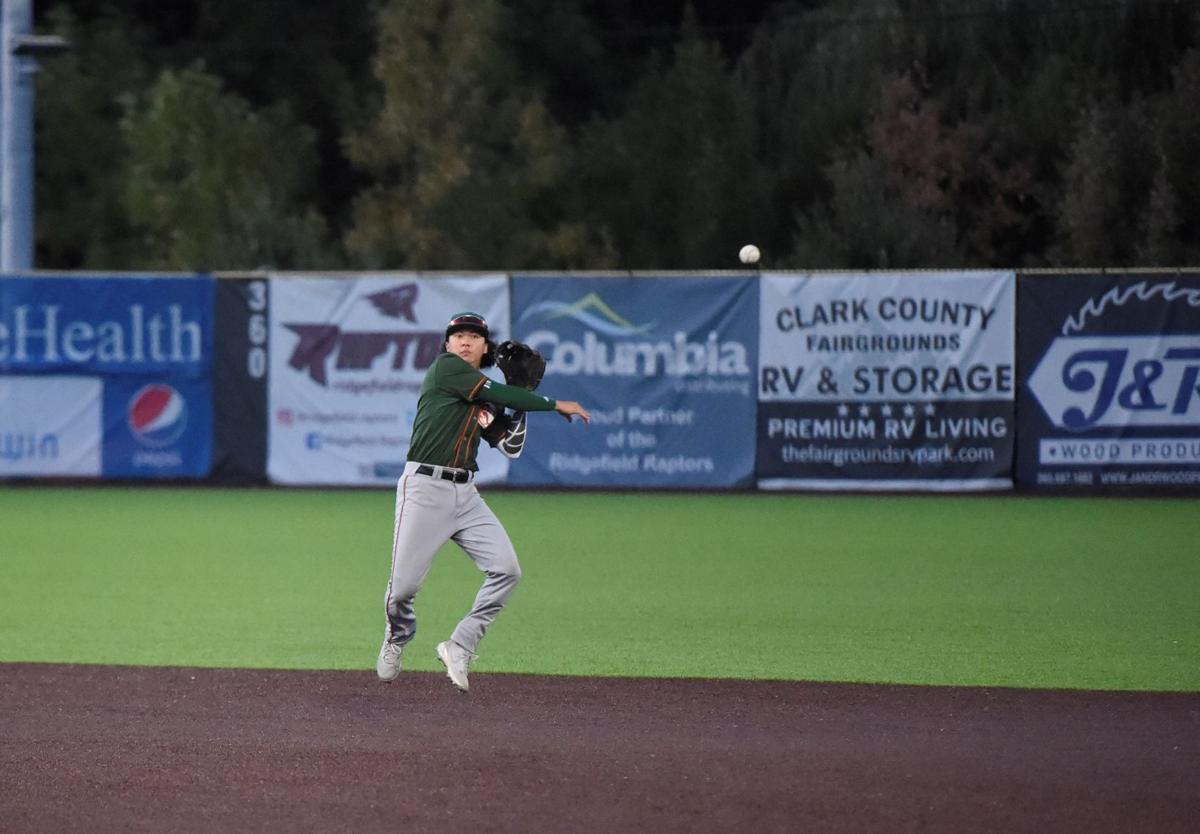 Cowlitz' Matty Fung throws across his body to beat a Ridgefield runner on Thursday, August 5, in Ridgefield.

RIDGEFIELD — Timely hitting cost Cowlitz a chance at a sweep over the Ridgefield Raptors at the RORC on Thursday night. That’s because the Raptors had good timing and the Black Bears didn’t.

Despite outhitting the Raptors 9-6, the Black Bears fell 5-2 on the scoreboard in the final game of the three-game series.

“We played well, we gave ourselves some opportunities, as they did,” Cowlitz coach Brian Burres said. “They just got the hits when they needed to and we couldn’t quite do that.”

At the beginning, it looked like Cowlitz might have had that timing on their side as they were first to mark the scoreboard in the top of the third.

Brock Bozett found himself in scoring position after a Raptor throwing error moved him to second after he reached on a slow roller for an infield single. Then Jacob Stinson stepped into the box a roped a triple into the right center gap to score Bozett and get the Black Bears offense moving. Stinson had the hot bat for the Black Bears all night as he finished 2-for-3 with the RBI triple and a walk to lead Cowlitz.

The early Cowlitz lead would be short lived as the Raptors answered right back on a two-run double off the bat of Caden Connor in the bottom of the third. From there, the Raptors didn’t look back.

Ridgefield doubled down on another big swing of the bat in the fourth. After Brady Kasper reached on an error, Isaac Lovings lined a shot over the left field wall to extend the Ridgfield lead to 4-1.

Right hander Kelly Austin got the start on the bump for the Black Bears and weathered the storm through six innings. Austin gave four runs, three earned and allowed five hits. Despite picking up the loss, Austin forced plenty of empty swings on his way to striking out 11 Raptors on the evening.

Burres said it was just that one pitch that Lovings drove out of the yard that cost Austin, noting that the 50-50 ball by Connor that snuck inside the foul line didn’t bother him. Burres also said he liked the way Austin handled the pressure that Ridgefield put on him by playing small ball early.

Cowlitz managed to get a run back in the eighth as Matty Fung picked up a pinch-hit RBI when he legged out at infield single to score Jacob Burley. However, once again, timing wasn’t on the side of the Black Bears as they loaded the bases but couldn’t find the hit they needed to open the flood gates for the comeback.

The Raptors answered that run in the bottom of the inning to push the lead out to the final tally.

After Austin, the Black Bears turned to the bullpen often across the final four innings as they used a total of four relievers to finish things against the Raptors. Sawyer Parkin was first up, but he only saw two batters — he hit a batter and recorded an out on a sacrifice bunt. Parkin was replaced by Liam Hatakenaka who finished the seventh, allowing a hit that scored the batter Parkin plunked. Phillip Roe picked up in the eighth and recorded an out for the Black Bears.

Burres said the quick stints were a result of trying to keep the game tight in the late innings.

Then things got tricky. Cowlitz tried to bring Eli Takalo into the game, but the move caused confusion among the umpires regarding his eligibility. The confusion caused a lengthy delay that spanned more than 15 minutes before Takalo was ruled ineligible because he was not on the original lineup card despite being on the active roster. In Takalo’s place, Keegan Wright entered the game and finished things out for the Black Bears. Burres took the blame for the miscue and the subsequent delay.

“Just an omission,” Burres said. “I screwed up, that’s what it was.”

The unearned run on Stinson’s triple was the lone blemish for Ridgefield starter Jaren Hunter. He went six full innings and allowed six hits while striking out five for the Raptors. Nick Nygard took over for Hunter and allowed one run on two hits as he finished the night on the mound for the Raptors.

Even after the loss, the Black Bears still made some time for celebration after the game. Both teams gathered near the mound and the Black Bears were presented with the first ever Columbia River Cup trophy after having beaten the Raptors four games to three to take the season series.

Cowlitz was back on the diamond in Wenatchee for another WCL matchup on Friday night. Burres stressed the importance of the final games as Cowlitz is currently three games out of the final playoff spot with just six games left on the season.

“Every game’s a big one right now for us,” he said. “We’re fighting, we’re on the outside looking in and we need to force our way into it.”

A look at what’s happening around the majors today:

In perhaps his final game with the Mariners, Seattle gave Kyle Seager a moment he will 'never forget'

SAN FRANCISCO (AP) — Julio Urías won't start after all for the Dodgers in the deciding Game 5 of their NL Division Series on Thursday night against the Giants, giving Los Angeles a left-hander out of the bullpen who has been tough on lefty hitters.

After another early exit, White Sox shift focus to future

CHICAGO (AP) — White Sox star José Abreu would have loved nothing more than to be gearing up for another game and a chance to keep Chicago's playoff hopes alive.

CHICAGO (AP) — The Houston Astros found themselves in familiar territory Monday, brushing aside comments by Chicago White Sox reliever Ryan Tepera after he implied they stole signs while winning the first two games of the AL Division Series in their ballpark.

OAKLAND, Calif. (AP) — Ray Fosse, the strong-armed catcher whose career was upended when he was bowled over by Pete Rose at the 1970 All-Star Game, has died. He was 74.

A look at what's happening around the majors today:

Cowlitz pitcher Sawyer Parkin flips the ball to first after fielding a bunt by Ridgefield's Brooks Dyer on Thursday, August 5, in Ridgefield.

Cowlitz' Jacob Stinson laces an RBI triple to the gap in right center field against the Ridgefield Raptors on Thursday, August 5, in Ridgefield.

Cowlitz' Matty Fung throws across his body to beat a Ridgefield runner on Thursday, August 5, in Ridgefield.