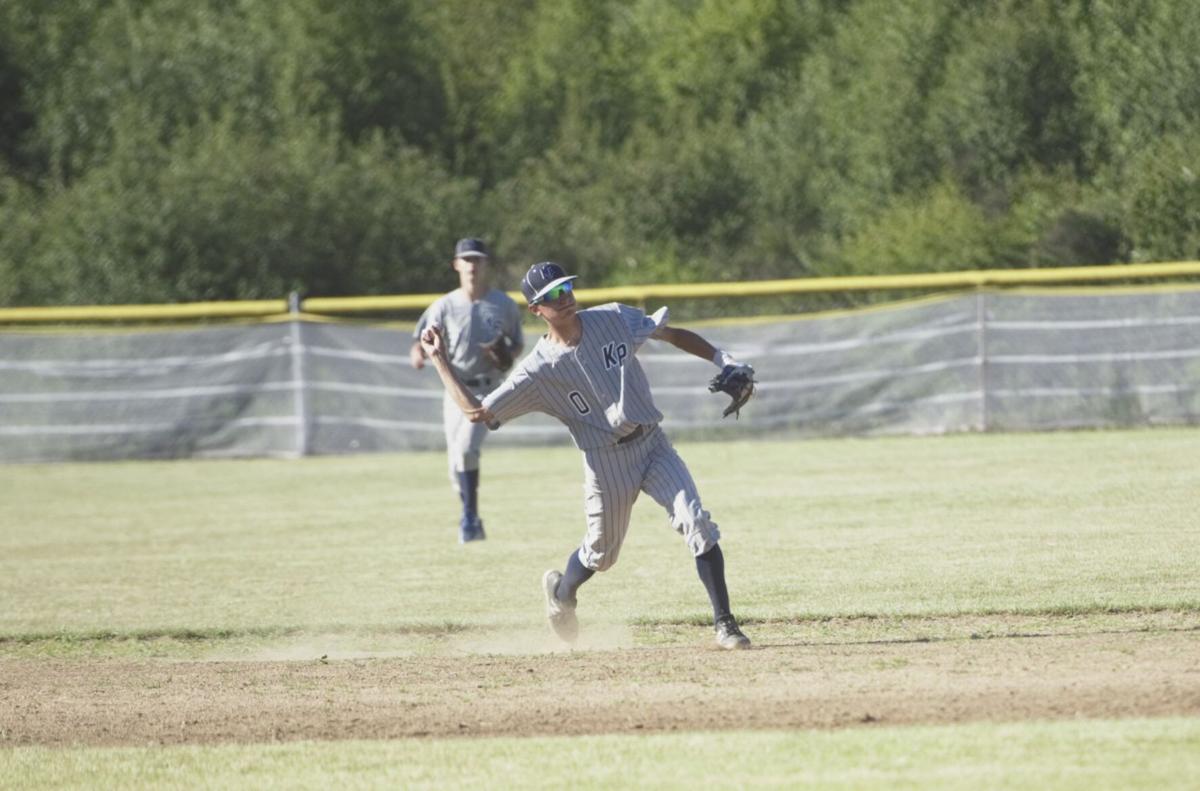 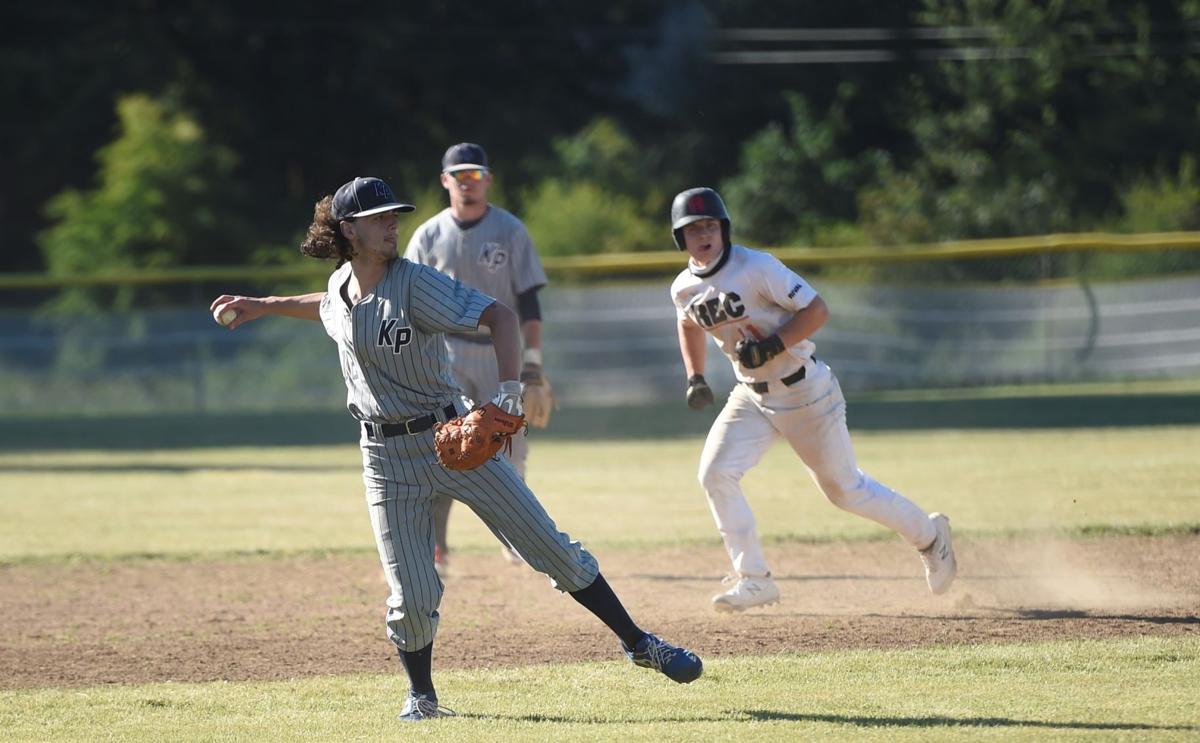 Kelso Premier's Kyle Spain makes a throw to first after fielding a ground ball at third base during the Championship of the Dave Orzel Haymaker Memorial Tournament on Sunday, June 20, at Winlock High School. 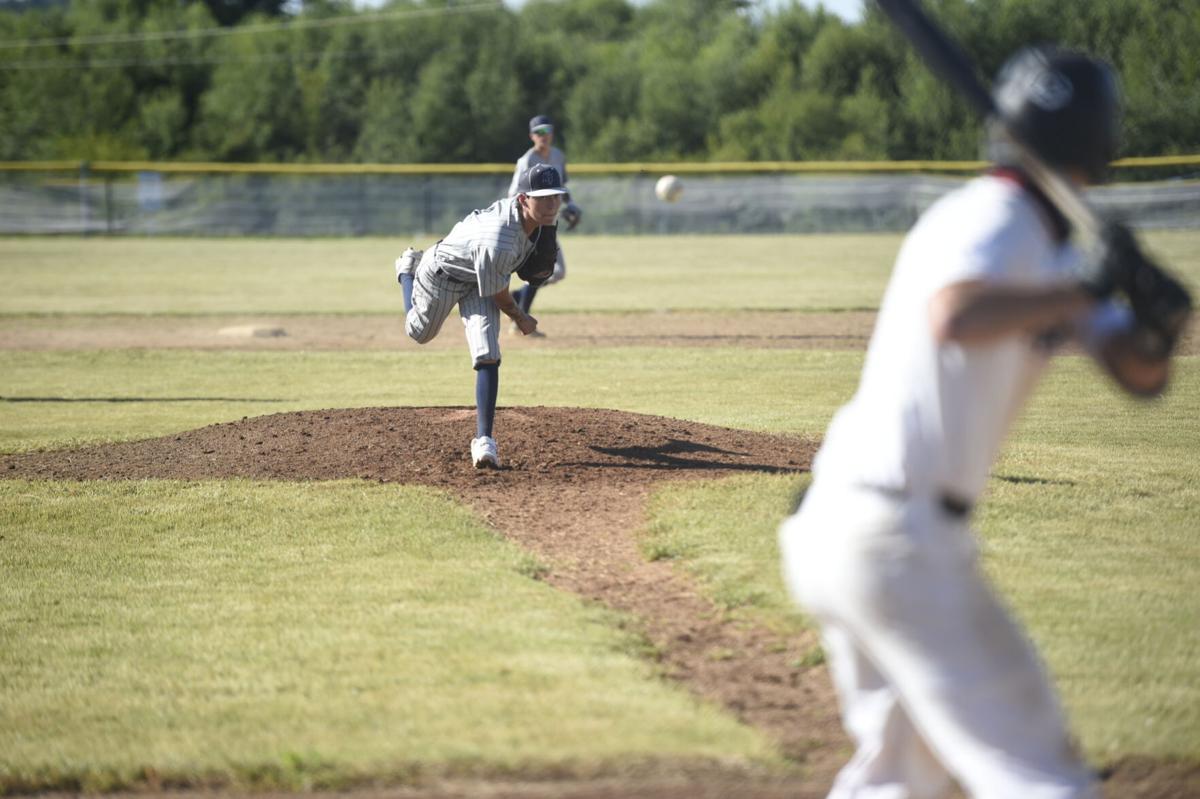 WINLOCK — Kelso Premier put together a strong run at the Dave Orzel Haymaker Memorial Tournament over the weekend, but they ran out of gas in the championship game against Everett’s Rival Baseball Club, losing 10-0 in five innings to finish as runners up on Sunday at Winlock High School.

RBC jumped on top early due to some struggles on the mound for Kelso. The Rival club took advantage of walks and plated seven runs in the bottom half of the opening frame to take a commanding lead at the start.

“We just didn’t throw strikes when it came down to it,” Kelso coach Emilio Foden said. “We gave up 12 free passes in the five innings and you can’t win a championship when you’re doing that.”

RBC added three more runs in the bottom of the third to take a 10-0 lead, which they were able to carry the distance as they continued to shut down Kelso’s offense.

Kelso also struggled at the plate as they were shut out and tallied just three hits. Chico Huntington, Masyn Allison and Austin McQuilliams each notched a base knock for Premier.

Despite the sour finish, Kelso had plenty to be happy about on their run to second place. Kelso opened the tournament with an 8-6 win over Lower Columbia Baseball Club’s Rohl Roofing.

Allison was reliable at the plate in the opener and finished a perfect 3-for-3 with three RBIs to help lead Kelso to an early win to kick off the tournament.

Kelso followed that up with a 10-0 win in five innings over the Aberdeen Apes in the quarterfinals thanks to a six-run second inning. Zeke Smith led Kelso at the plate and finished 2-for-3 with two RBIs and three runs scored to lead Premier.

Alex Buchanan tossed a two-hit gem and struck out seven batters while only allowing one walk in the shutout performance on the bump.

Matt Kinswa got the win on the mound as he allowed two hits across four innings and walked two batters while striking out five.

Foden said offense was what drove Kelso during the tournament.

“I was proud of our offense and the offensive adjustments we made from game one to game four,” he said.

The big loss in the title game stung, but Kelso has plenty to keep playing for.

“Guys will regroup, we’ve got the State championship next weekend and I know that they’re going to come out ready to go,” Foden said.

Kelso (16-4-1) hosts the State Championship this weekend. They get started against Twin Cities at 7 p.m., Friday, at Rister Stadium.

Kelso enters the tournament with its eyes on the top prize. Foden said he’s excited to see what his team can accomplish if they play to their ability.

“We got to play our game, plain and simple,” Foden said. “We’ve got to execute the plays that we have, we have to buy in. That’s going to be the biggest part, we just need everyone to buy in. If we all buy in and play how we can, good things will happen and we’ll find ourselves in another championship.”

Before they look too far ahead, Foden made sure to recognize the importance of the Orzel Tournament.

“I really appreciate this tournament,” he said. “I never got the chance to meet Dave Orzel, but I’ve heard really good things throughout the community about him. Even some of my coworkers at work have been telling stories about when he coached at Kalama. So to get to play a tournament in his honor was a great time and a great experience. I saw a lot of passion out of the different clubs that were here that knew him.”

Jim Souhan: How about a robot arbitrator to settle MLB’s dispute?

While the NFL dominated the sports landscape the past two weekends, Major League Baseball and the MLB Players Association continued to dawdle and damage their own popularity.

NEW YORK — One of many problems for the Mets last year was the inability of several key players to match the production of their breakout seasons.

Mariners position overview: Waiting on the catcher of the future? Seattle needs catching production in the present

With MLB shut down because of the lockout, The Seattle Times is doing a position-by-position assessment of the Mariners organization entering …

Locked out baseball players plan to make a counteroffer to management on Monday.

Kyle Seager announces retirement from baseball after 11 seasons with Mariners

SAN DIEGO — Garth Brooks is heading to Petco Park on March 5 for a concert at the downtown ballpark, where several more hits are expected in t…

Even though Major League Baseball is mired in a lockout, team-organized workouts for minor league players not on the 40-man roster or part of …

Larry Stone: No, Kyle Seager never made a postseason. But the Mariners' star went out on his own terms.

Maybe we all should have known something was up when, early in the 2021 season, Kyle Seager changed his walk-up song to Eric Church’s “Carolin…

In today’s Major League Baseball labor negotiation news: there is no deal, but there is another meeting.

Kelso Premier's Kyle Spain makes a throw to first after fielding a ground ball at third base during the Championship of the Dave Orzel Haymaker Memorial Tournament on Sunday, June 20, at Winlock High School.