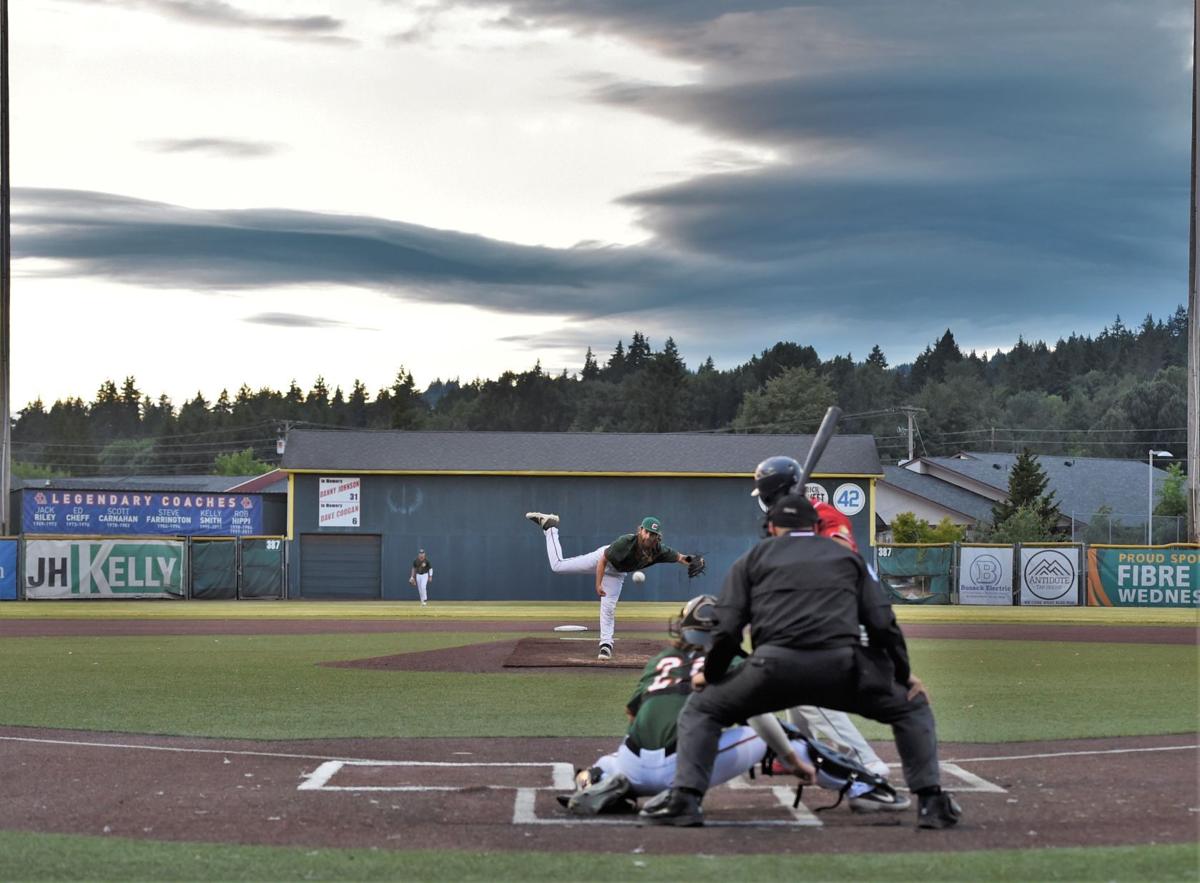 Michael Benz of the Cowlitz Black Bears fires a pitch toward home plate during the team's home opener against Walla Walla on Friday, June 4. Benz did not allow a hit in one inning of work but Cowlitz lost 1-0 to the Sweets. 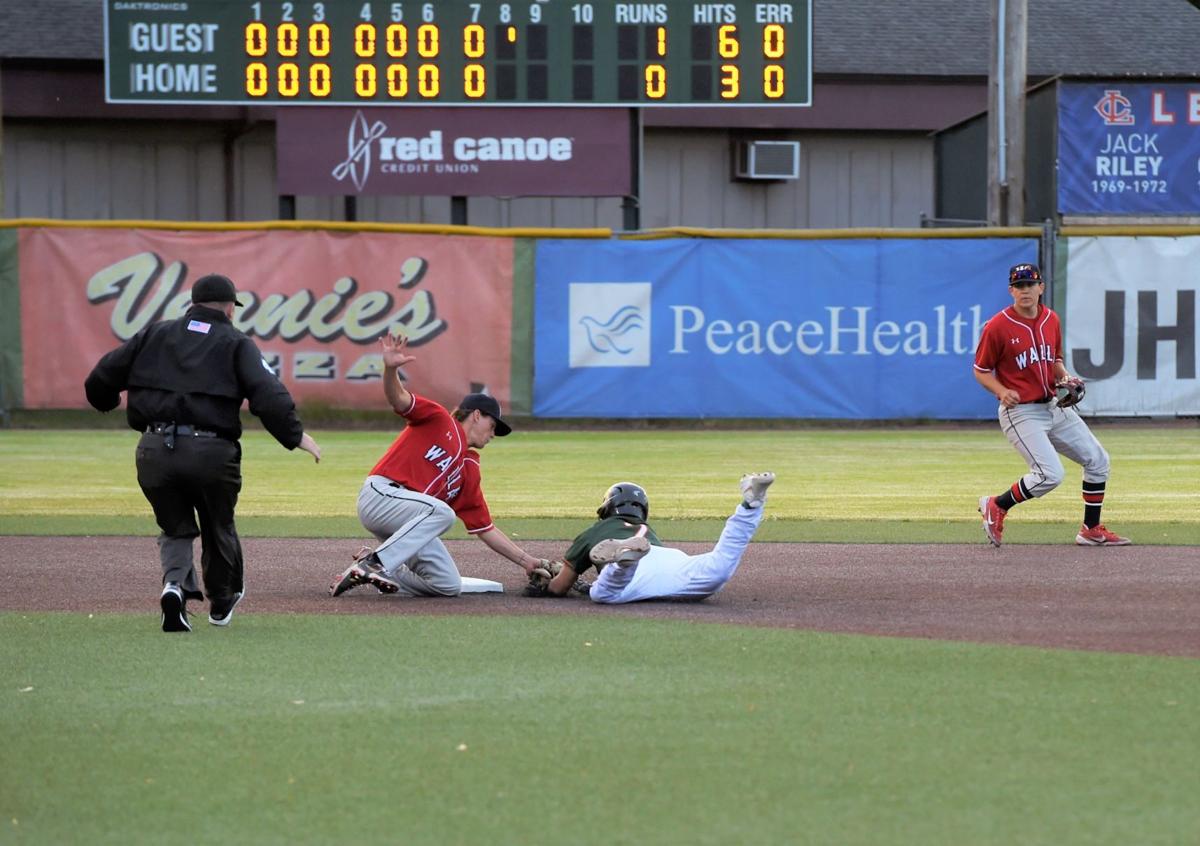 Sean Mulcare of Cowlitz Black Bears is tagged out while attempting to steal second base on a ball in the dirt in the eighth inning of a WCL baseball game against Walla Walla on Friday. The Black Bears dropped their home opener 1-0 to the Sweets. 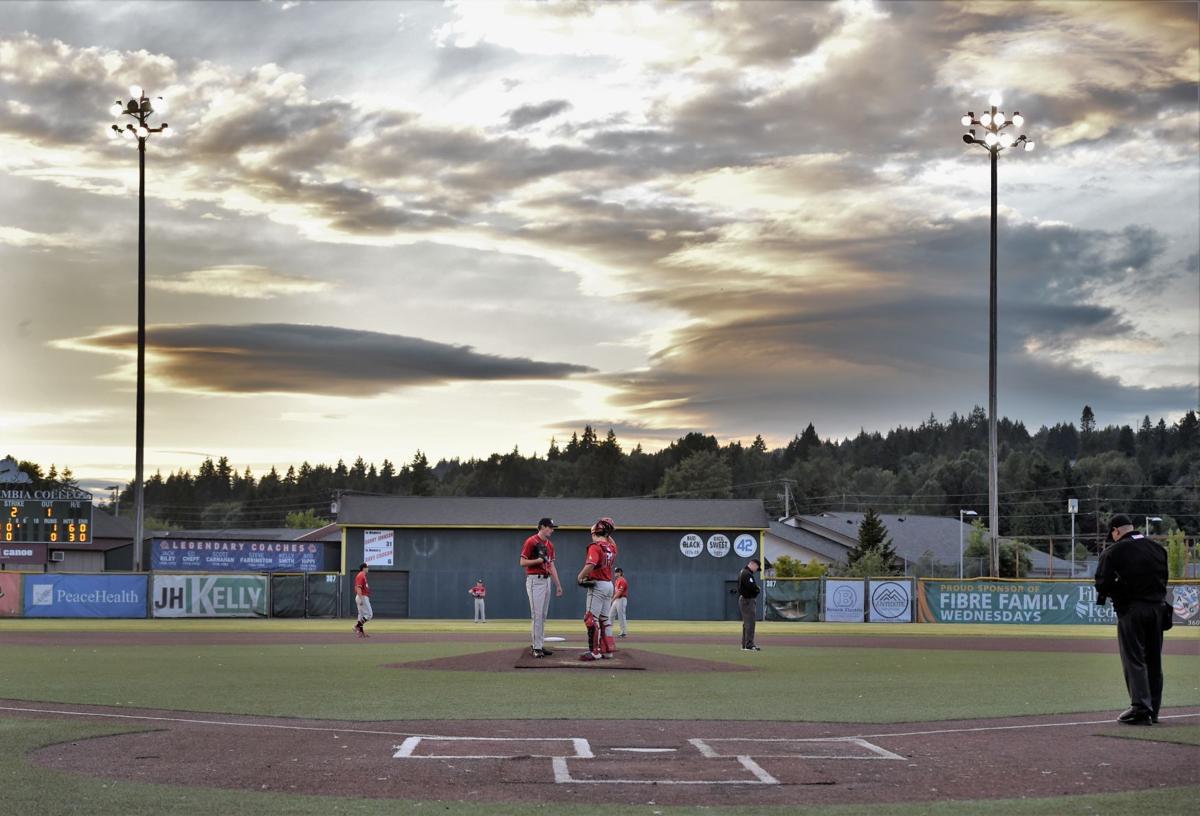 Walla Walla Sweet players talk things over on the mound during a WCL baseball game against the Cowlitz Black Bears at David Story Field on Friday, June 4. The Sweets won 1-0.

Before 6:35 p.m. on Friday it had been nearly two years since the Cowlitz Black Bears had hosted a home baseball game. It had been 667 days between pitches to be exact.

As with so many things, the 2020 West Coast League summer campaign was shut down before it ever got going due to COVID-19 and the layoff left a little rust around the edges of the collegiate wood bat league operation. During Friday’s home opener against the Walla Walla Sweets there were numerous moments that proved the boys of summer, their fans, and the staff members pulling all the levers behind the curtains had forgotten some of the long standing traditions of the grand old game.

Take for instance the playing of the national anthem, a pregame ritual as ingrained in the sport as early batting practice and outfield stretching sessions. Except on Friday, when the Star Spangled Banner wasn’t belted out until after the Black Bears defense had already recorded three outs to get their home docket officially underway.

But once former Cowlitz County Sheriff Mark Nelson found his mark and belted out every last note of the patriotic tune in the middle of the first inning, things began to feel surprisingly normal around the ballpark. There were many fans, few masks, and plenty of great pitching. That sort of familiarity is something that has been in dangerously short supply over the last 16 months.

Count first-year Cowlitz skipper Brian Burres among Sheriff Nelson’s fans. In fact, Burres went so far as to call for an encore presentation.

But the pregame anthem wasn’t the only thing that was forgotten Friday. There were times when it seemed like the fans forgot that they are supposed to fanatical during their time away from the ballpark as great plays and extraordinary efforts went unrecognized by an out of practice crowd. Moreover, the Black Bears forgot that you’ve got to score one to win one as they fell 1-0 to Walla Walla in a classic pitchers duel.

Cowlitz managed just three hits in the contest and rarely put a runner as far as second base. Matty Fung of UC Davis led the Black Bears at the plate with a double and a walk. Sean Mulcare of the University of Portland added a base knock and a walk, while Wilson Weber turned in one hit in four plate appearances.

Weber, a product of Oregon State, is a highly touted catcher with a big stick and perhaps an even bigger arm. Friday night Weber held down first base but he was slotted to get behind the dish for Saturday’s contest.

“He’s got some juice and wait until you see him throw the ball. He’s got a great arm, too,” Burres said.

Jake Dahle started the game on the mound for Walla Walla and tossed four shutout innings with four strikeouts. Logan Hurd earned the win for the Sweets by spinning a scoreless seventh and eighth frames while Eric Romo locked down the save with a two strikeouts that helped strand a runner that reached on an error.

On the hill for the home team Myles Davis took care of the first six innings of work. The righty scattered three hits over the first two innings and didn’t allow another, striking out six batters along the way. Max Petty spun a scoreless seventh inning before handing the ball off to Jake Dent in the eighth inning. Dent wound up taking the tough luck loss as the Sweets cobbled together three hits in the inning, including an RBI single by Justin Folz that brought Seth Ryberg around to score what wound up being the winning run.

Michael Benz notched the final three outs for the Black Bears with a pair of strikeouts to offset one hit.

Burres came away impressed with the Sweets’ roster following his first opportunity to put eyes on their guys.

“You could see as soon as we brought our lefty in they brought our righties in so it seems like they have a pretty deep bench,” Burres noted.

Early in the contest the Black Bears suffered a serious scare when Fung, playing second base, collided full speed with right fielder Jayce Bailey while both players tried to track down a Texas League blooper.

“It was quite windy so I’m guessing that as that ball was coming back they both lost track of where they were on the field, and I bet you both of them were yelling ‘I got it!’” Burres said.

The dangerous snag was good for the final out of the second inning and helped Davis escape a bit of a jam with a pair of runners on base. After laying sprawled on the ground for several minutes in order to catch his breath Fung finally gathered himself and trotted off the field as the half-capacity crowd sat stunned in silence.

Going forward, that’s the sort of opportunity that Black Bears fans should be sure to rain down applause for a pair of players who are obviously willing to put their bodies on the line.

“Matty said he was alright. He took a knee to his chest and it knocked the wind out of him, but obviously he was fine. He hit a double in his next at bat,” Burres said. “I think that’s something we might do a little bit more work on; some more tweener communication. The last thing we need is somebody getting hurt.”

Fung wasn’t the only Black Bear to reveal that he’s into leather during the game. Over at third base Brock Bozett tipped over like a teapot to snare a looping line drive early in the contest and later on Bailey went horizontal to rob a Sweets batsman of an extra base hit. With limited opportunities for players to have made an impression thus far, those types of plays are the ones that stand out to a skipper who made a Major League career out of collecting outs.

“It’s hard to single guys out but we saw Bozett’s diving play today. Bailey in the outfield made a very similar play to that,” said Burres, a former MLB pitcher. “We’ve got guys just making plays all over the place and I love defense. It’s like my favorite thing to watch so that’s what I get all excited about.”

Cowlitz (1-1) was set to host Walla Walla again Saturday night before ending their three game home set against the Sweets at 1:05 p.m. on Sunday. The Black Bears will head to Bend next week for a three game series against the Elks that’s set to begin Tuesday.

Michael Benz of the Cowlitz Black Bears fires a pitch toward home plate during the team's home opener against Walla Walla on Friday, June 4. Benz did not allow a hit in one inning of work but Cowlitz lost 1-0 to the Sweets.

Sean Mulcare of Cowlitz Black Bears is tagged out while attempting to steal second base on a ball in the dirt in the eighth inning of a WCL baseball game against Walla Walla on Friday. The Black Bears dropped their home opener 1-0 to the Sweets.

Walla Walla Sweet players talk things over on the mound during a WCL baseball game against the Cowlitz Black Bears at David Story Field on Friday, June 4. The Sweets won 1-0.