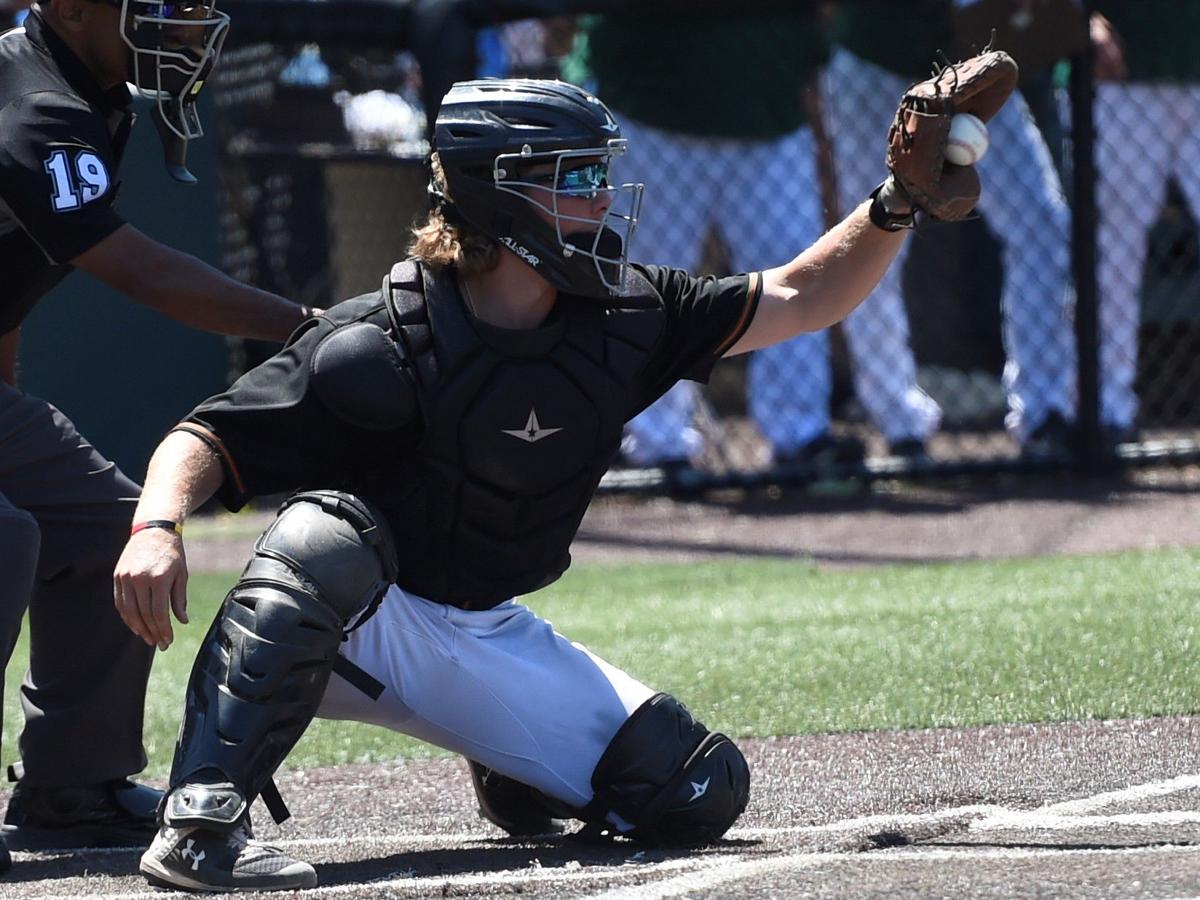 Wilson Weber sees the ball into his mitt in the Cowlitz Black Bears' 3-2 win over Ridgefield on July 10. Weber, who graduated from high school at the end of this past spring, is using the WCL season as a way to get up to college speed before starting at Oregon State in the fall. 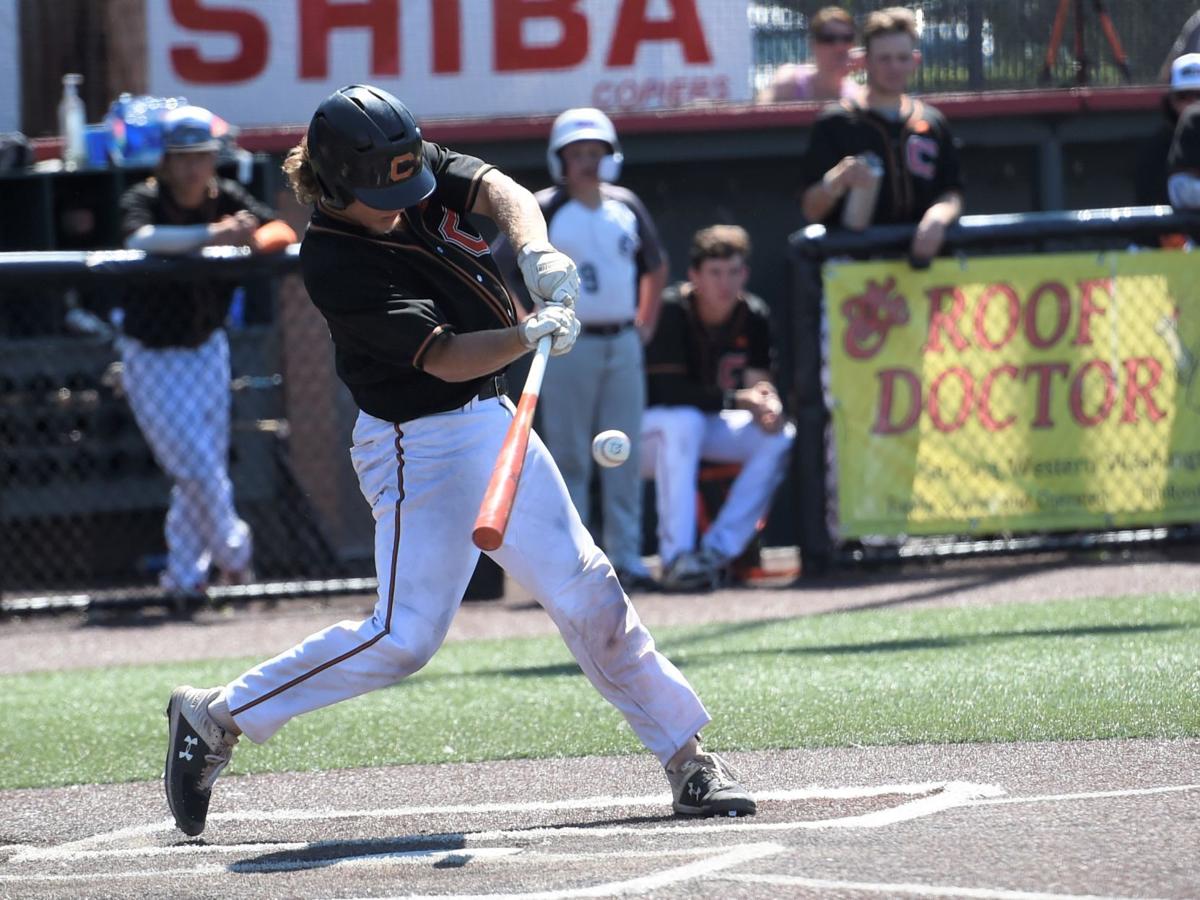 Wilson Weber drives an RBI single into right field in the bottom of the eighth inning of Cowlitz's loss to Ridgefield on July 11 at Story Field.

Wilson Weber doesn’t need the added bulk of the tools of ignorance strapped on him to form an imposing figure. But when the public address announcer at Story Field calls out the Black Bears’ starting lineup, he stretches the truth a little bit on behalf of the backstop out of Gresham, Ore.

When the fans hear, ‘A freshman at Oregon State,’ that’s technically correct, but it’s not the whole truth.

Weber, who just turned 19, has yet to take a class in Corvallis, or attend a practice for Mitch Canham’s Beavers — those won’t come until after he wraps up his season with the Black Bears.

After graduating from high school last month, and before getting a taste of Pac-12 baseball beginning in the fall, he’s getting three months of prep time as one of the youngest faces both in his own dugout and in the whole West Coast League.

Not that Weber minds, or is even new to the situation.

The switch was drastic for Weber, going from being one of the most dominant prep hitters in the state of Oregon to just a piece in a deep collegiate level catching corps in Longview.

In just 19 games of the COVID-19-altered season, Weber logged 33 hits at 6A Barlow to lead the state classification. He finished the 2021 season top-10 in pretty much every statistical offensive category, including first in runs scored (29), second in home runs (nine), third in RBIs (30), and fifth in batting average (.532).

That wrapped up a dominant career just a few miles south of the Columbia River for Weber, who drew the attention of the staff in Corvallis pretty much as soon as he stepped onto the diamond as a freshman and committed to the Beavers the fall of his sophomore year.

“I have a couple friends who went there, and I just wanted to stay close to home, and obviously play at a good college,” Weber said. “I talked to them for awhile, and I’ve always liked the Beavers to the point where it was like ‘This is the perfect fit for me.’”

Now for the first time since his freshman season at Barlow, Weber isn’t the one and only option behind the plate, splitting time with Jacob Burley and Dawson Martin — both of whom have at least two seasons of college experience under their belts.

“I’ve never really had a bunch of other catchers on the team; I’ve always been the top kind of guy to where I was helping the other guy,” Weber said. “Now it’s totally flip-flopped; I’m the young guy who hasn’t played as much and hasn’t had as much experience as them. I’m definitely not too far behind, but I’m learning little things here and there.”

That depth allows Weber to start a game behind the plate, then get two days to either play as a designated hitter, work with the pitching staff in the bullpen, or give his legs a day of rest.

And with all of those jobs, Weber is taking the chance to learn as much as possible from a full team’s worth of more experienced players, and coaches.

“It definitely takes more of a focus,” he said. “High school, coming from there, you can kind of take days off. But here, you definitely can’t, and it comes back to bite you if you do. I’m definitely staying more focused, getting a lot better, and working a lot harder and not being able to take days off.”

He said he had plenty of chances to catch high velocity in travel ball throughout high school, but that some of the Black Bears’ older and more wily southpaws gave him some fits behind the plate with their movement before he got used to them.

It’s been a bit more of a journey with the bat in his hands, facing off against pitching at least two or three steps above what he was just facing in high school season. He’s hitting .206 this season with 26 strikeouts in 19 games, but he’s also shown that when he gets ahold of the ball he can put a charge into it, with five doubles, two triples, a home run, and 12 RBIs.

“At the plate he’s recognizing pitches early, he doesn’t swing at the same breaking ball in the dirt twice,” said Black Bears manager Brian Burres. “He’s doing a good job of taking his at-bats pitch-to-pitch, not letting one pitch dictate the rest of his at-bat, those types of things, which are a good sign of maturity.”

Weber is also getting to use the WCL season as a get-to-know-you campaign for a good deal of his future teammates at Oregon State. Port Angeles, Walla Walla, and Portland all have one or two current or future Beavers among their ranks. Ridgefield brought Jaren Hunter, whom Weber caught for two years at Barlow in high school, and will play with again this coming season. And when the Corvallis Knights come to Story Field on Wednesday, they’ll bring eight Beavers.

“That’ll be fun,” Weber said. “This is definitely getting me better and ready for that.”

Wilson Weber sees the ball into his mitt in the Cowlitz Black Bears' 3-2 win over Ridgefield on July 10. Weber, who graduated from high school at the end of this past spring, is using the WCL season as a way to get up to college speed before starting at Oregon State in the fall.

Wilson Weber drives an RBI single into right field in the bottom of the eighth inning of Cowlitz's loss to Ridgefield on July 11 at Story Field.