WCL: Black Bears playoff hopes come to an end in extra-inning loss to Bellingham
0 comments
Share this
{{featured_button_text}}
1 of 2 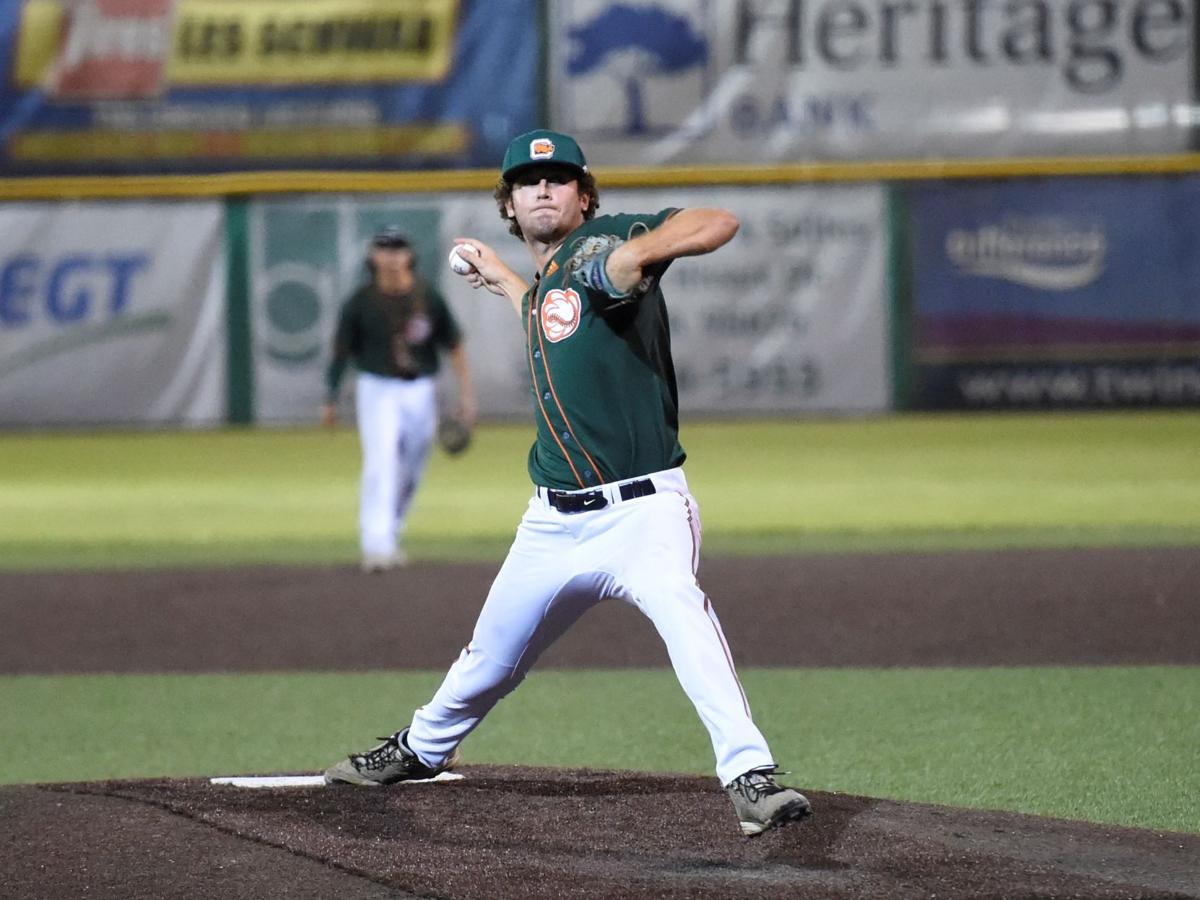 Phillip Roe throws a pitch in the top of the 10th inning of Cowlitz's 11-8 loss to Bellingham on Aug. 11 at Story Field. Roe took the loss, allowing two runs on one hit and a walk in 1/3 of an inning. 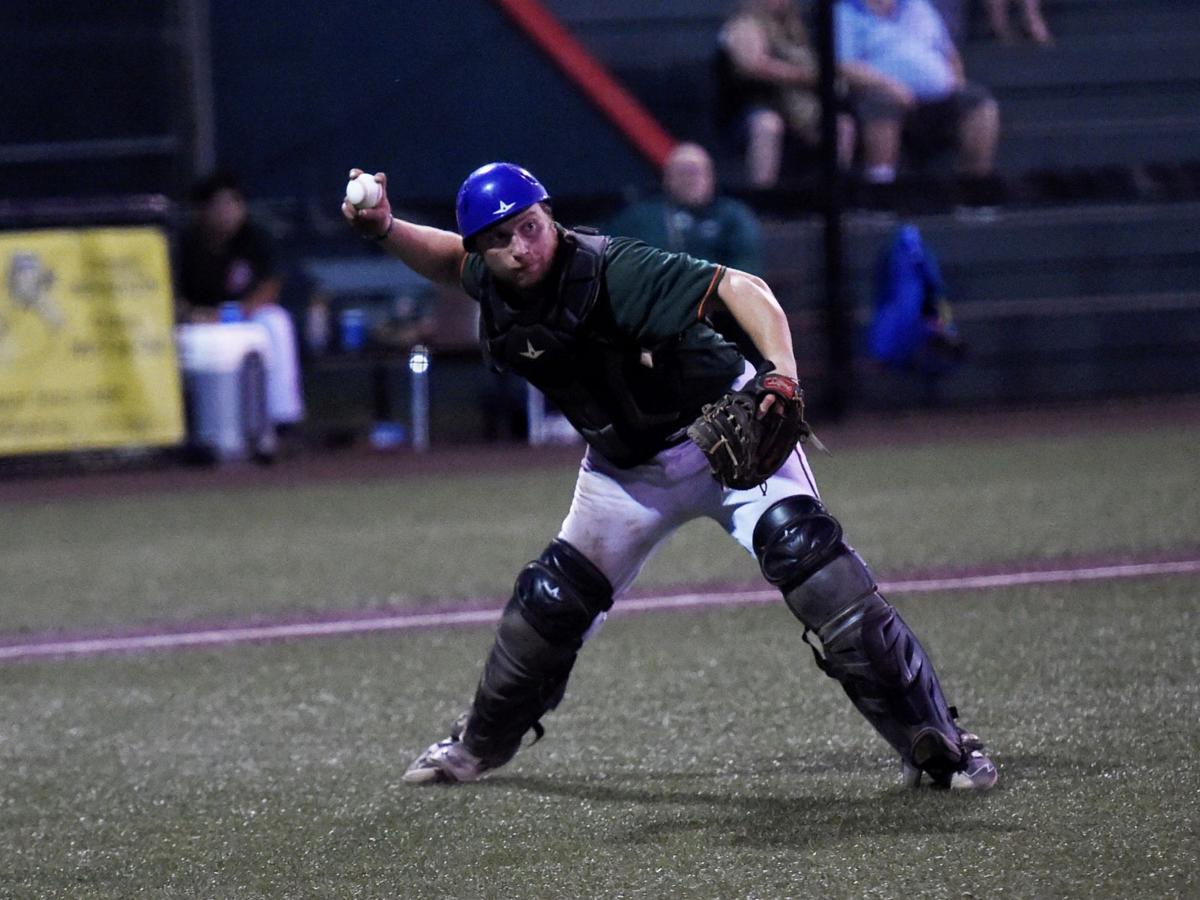 Dawson Martin pounces on a bunt in Cowlitz's 11-8 loss to Bellingham in 10 innings on Aug. 11 at Story Field. At the plate, Martin went 2-for-5 with a walk and a run scored.

Cowlitz’s magic officially ran out at Story Field long after dark Wednesday, in an 11-8 loss to Bellingham in 10 innings that — combined with results out of their control — ended the Black Bears’ shot for a playoff spot.

For a moment, everything was breaking the Black Bears’ way. After an extra-innings victory Tuesday over the Bells, Cowlitz needed another win and a Bend loss to stay alive, as well as losses by Ridgefield and Portland to have a good shot to sneak in on the final day of the regular season.

Sure enough, just around 7:15 p.m., Cowlitz held a 5-0 lead in Longview. In Corvallis, the Knights had a 2-1 lead over the Elks. In Walla Walla, the Sweets were well into a dominant shutout of the Raptors. And in Port Angeles, the last-place Lefties held a narrow edge over the Pickles. If all four results held, the Black Bears would not only be alive in the playoff race, but control their own destiny on the final day of the season.

But going into the fifth inning, Brian Burres took Carter Sutton out and went to the bullpen, and everything went sideways in a perfect storm.

Well, actually, it started with the opposite of a storm.

When Liam Hatakenaka came in for the top of the fifth inning, the flag out in left field at Story Field, which at night games all season long has spent its games blowing in hard enough to nearly rip off its pole, lay quiet and unmoving in the still warm air. So when Alex Lambeau pounced on a hanging mistake, the ball didn’t die on the track as fly balls have all summer, but sailed well over the Black Bears’ bullpen for a two-run bomb to cut the lead to 5-3.

Two batters later, LCC’s Daniel Gernon found the same spot to tie it at 5-5, and after Dale Takalo came into the game with one out, Emilio Corona did it again, clearing the back wall to leave Story Field entirely and give the Bells a 6-5 lead, just like that.

The weather — more specifically the heat — may well have played a factor throughout the night keeping the defenses less than their sharpest. Cowlitz and Bellingham combined for seven errors on the evening, and had plenty more misplays.

“I think the heat does mess with you,” Burres said. “It gives you some lapses. It’s hard to focus when your body is already a bit on the hot side. I think that did play a part in today’s game.”

Bellingham had multiple short balls to the right side where nobody covered first base, and Rikuu Nishida followed the first of those instances with a sacrifice bunt that ended up driving two runs home when the throw to first went wild into right field. On the Black Bears’ unfortunate side of things, Bellingham brought the go-ahead run in in the top of the eighth inning on an error on a pickoff attempt at third base, and pushed its lead in the top of the 10th on a suicide squeeze that added another run on the back side after a throwing error.

And with things getting and staying weird, the final rough piece fell into place for the Black Bears: their dwindling roster. On his third pitcher just 13 innings into the game when Takalo came in, Burres was already working on a short staff. The pitching staff that for so long had led the WCL in ERA had already started to return to their college teams in dribs and drabs over the past days and weeks, and Wednesday, it came to the fore.

The departures of starters like Myles Davis, Carson Angeroth, Max Pettey, and Izaak Martinez meant that Sutton needed to shift to his starting role at the end of the season. Mark Woinarowicz was gone, as was James Bradwell, who’s already across the continent playing for Equipe Quebec in the Frontier League.

"That’s this league,” Burres said. “You sign on knowing how it’s going to be. It’s just the timing of the league.”

With the limited options, Burres had already stretched out Jake Dent and Keegan Wright on Tuesday to the point that they weren’t available.

He went for the same strategy with Michael Benz, who came into a 6-5 game in the seventh and extended to three innings, but in the 10th he gave the ball to Phillip Roe, who allowed a double and a walk to set things up, and the Bells cashed in against Eli Takalo after another pitching change to take the lead for good.

After Story Field cleared out, the final shoe dropped; Bend had reeled off eight unanswered runs to come back and beat Corvallis 9-2, ending Cowlitz’s playoff aspirations for good.  Long after that, Portland threw one last uppercut for good measure, finally beating Port Angeles 5-3 in 15 innings.

Cowlitz started the evening off well, bringing three runs home on a bases-clearing Broc Mortensen double in the bottom of the first, then two more in the second on Nishida’s bunt. Immediately after Bellingham dropped it six-spot in the top of the fifth, the Black Bears came right back to retake the lead, with Henry Muench singling home Dawson Martin and Brock Bozett bringing Muench in to make it 7-6.

When Bellingham retook the lead off of Benz in the top of the eighth, the Black Bears came back yet again. Jacob Stinson drew a walk and took off for second on a ball that bounced away from Charlie Saum behind the plate. Saum pounced on the ball and his throw down beat Stinson by 5 feet, but Ty Saunders couldn’t hold onto it. Stinson then went to third on an easier wild pitch, and scored to tie the game on a Mortensen RBI single.

Mortensen finished 2-for-6 with four RBIs. Bozett, Martin, Muench, and Matthew Schwarz both also had two-hit games; Cowlitz pounded out 12 hits and drew 10 free passes, but finished with 13 runners left on base and ultimately couldn’t get the last rally it needed.

“It would have been nice to punch again. It was just back-and-forth,” Burres said. “They have a good team over there. They’re already in the playoffs, and there’s a reason for that.”

The Black Bears are set to wrap up their regular season at Story Field against the Bells on Thursday evening.

Phillip Roe throws a pitch in the top of the 10th inning of Cowlitz's 11-8 loss to Bellingham on Aug. 11 at Story Field. Roe took the loss, allowing two runs on one hit and a walk in 1/3 of an inning.

Dawson Martin pounces on a bunt in Cowlitz's 11-8 loss to Bellingham in 10 innings on Aug. 11 at Story Field. At the plate, Martin went 2-for-5 with a walk and a run scored.