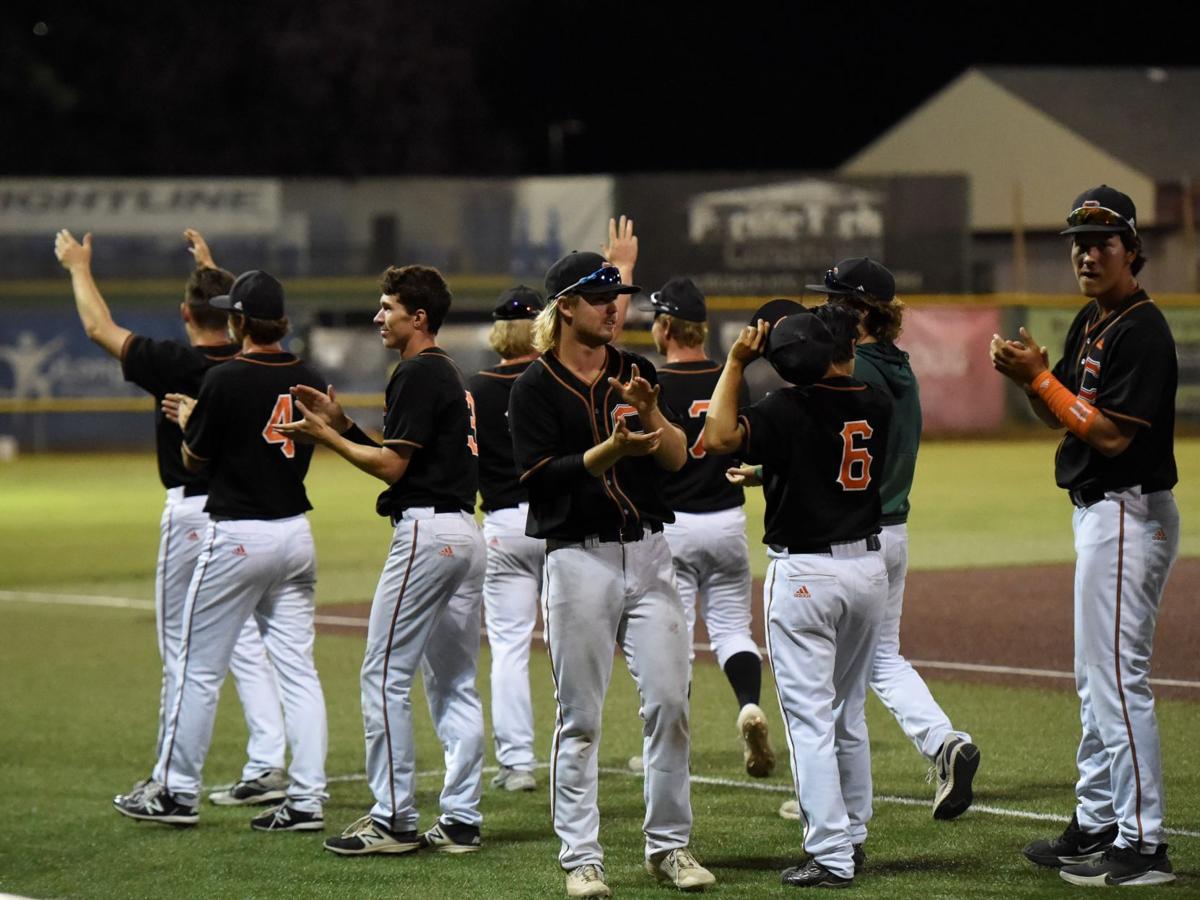 The Cowlitz Black Bears salute and applaud the fans at Story Field following their 3-2 loss to Bellingham to end the 2021 season on Aug. 12. 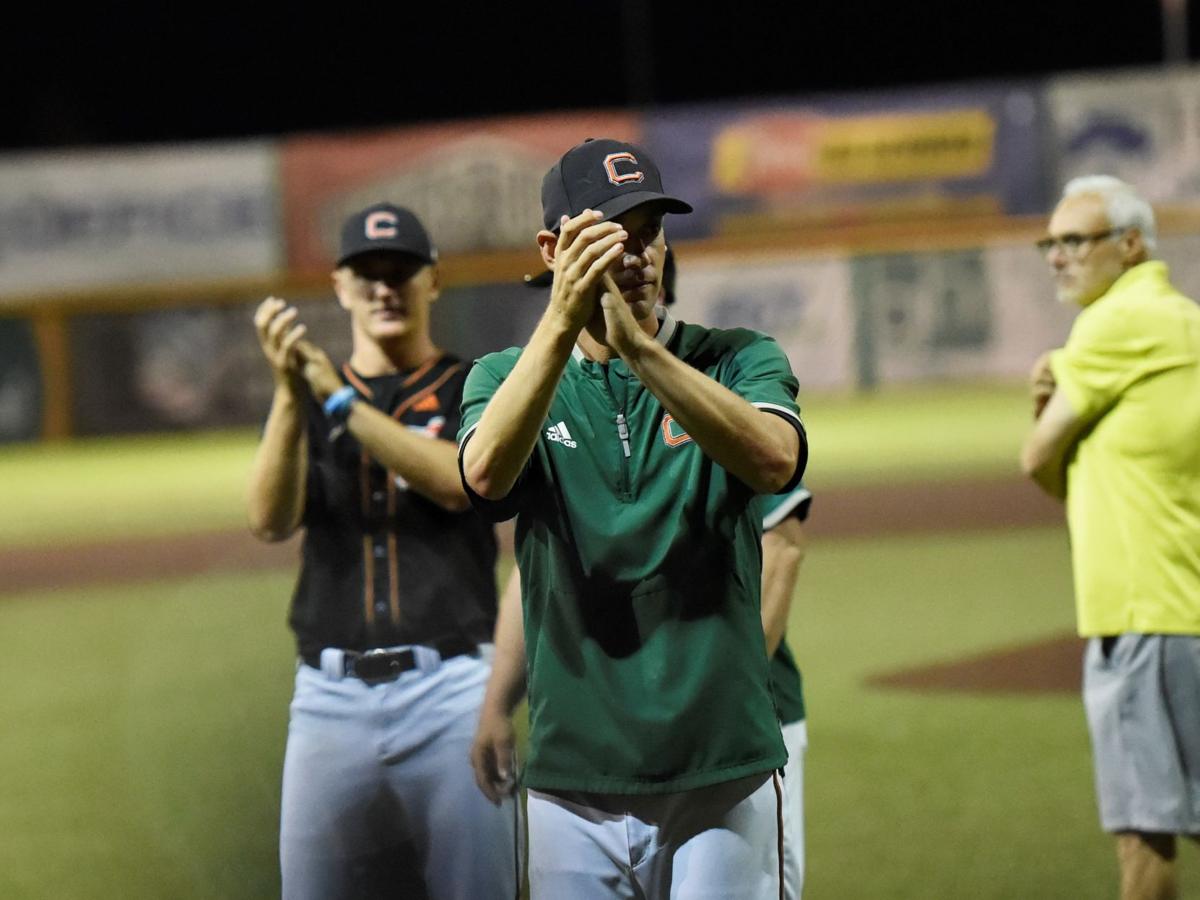 Cowlitz manager Brian Burres returns the crowd's applause after the Black Bears' season-ending 3-2 loss to Bellingham on Aug. 12 at Story Field. Burres led the Black Bears to a 32-26 record across WCL and non-league play in the 2021 season. 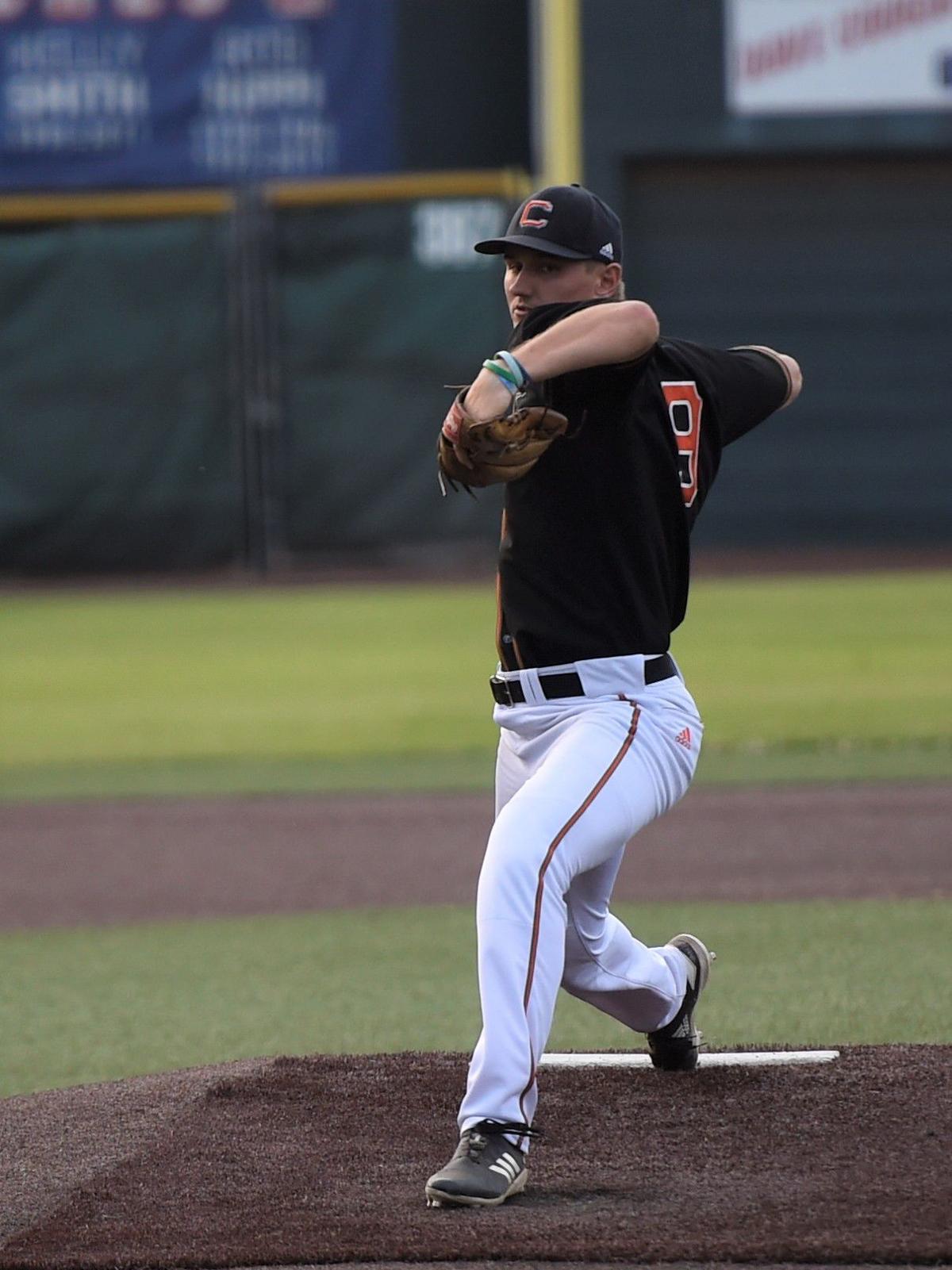 Kelly Austin throws a pitch in the top of the second inning of Cowlitz's 3-2 loss to Bellingham on Aug. 12 at Story Field. Austin added three strikeouts to his league-leading total Thursday, ending his season with 83 between WCL and non-league play.

Jacob Stinson’s comebacker bounced off Trevor Barth’s glove, but the Bellingham pitcher recovered, picked the ball up, and flipped it over to first base. And so the Cowlitz Black Bears’ 2021 season came to a close, with a 3-2 loss to the Bells after one rough, two-error inning.

Any other night, and it would have been an absolute gut-punch of a loss, one that would have been tough to forget about before the next game as a packed schedule rolled along. But as the Bells finished their handshake line on the mound at Story Field on Thursday, the mood was different.

Instead of shuffling down the left-field line as they had night after night the past two months, the Black Bears stopped. They turned around, they faced a cheering crowd that had largely stuck around for the whole game, and then they tipped their caps and applauded the fans.

The 2021 Cowlitz Black Bears ended their season with a loss. But after COVID-19 shut the West Coast League down entirely in 2020, and drastically altered the way the league operated in 2021, the season was most definitely a win.

The Black Bears came into the final day of the regular season already out of playoff contention; their loss to Bellingham Wednesday, coupled with wins by Bend and Portland saw to that. So instead of sticking to his starters, manager Brian Burres turned out his bench, getting 13 position players and five pitchers into the game.

“In this league, guys start leaving, so we’re pretty thin,” he said. “I just wanted to make sure everybody got some time. Especially, if you’re able to stay from Day 1 to the last day, it’s pretty special. We had a lot of guys do it, and I wanted to make sure they got their ABs and some playing time.”

Fittingly, the night started with the Black Bears’ season-long ace, Kelly Austin. The UCLA-bound hurler had his shortest outing of the season – due entirely to Burres trying to get as many arms in as he could – but shined nonetheless, striking out three and walking none in three no-hit innings.

Austin, who came into his final start already holding the Black Bears’ franchise record for strikeouts in a season, pushed his league-leading total to 76 in WCL play. In 10 starts over the summer, he compiled a 4-1 record, a 2.43 ERA, and a 0.73 WHIP.

“He’s the hardest worker you’re ever going to find,” Burres said. “Honestly, no one’s going to outwork him, either physically or with the brain. I think that really sets him apart from a lot of guys.”

Austin handed the ball off to Toma Murase, who put together one of his better outings of the season, pitching two clean innings before running into a bit of trouble in the sixth. He finished with one earned run allowed in 2 1/3 innings of work.

“Hopefully he’ll take that into the next season for him in college,” Burres said.

Cowlitz took a 1-0 lead in the bottom of the third inning on a Rikuu Nishida RBI single, scoring Jayce Bailey. Then, when the Bells tied it up in the top of the sixth, the Black Bears came right back in the bottom half of the inning, with Dawson Martin driving Brock Bozett home to make it 2-1.

The trouble inning for the Black Bears came in the top of the eighth. Philip Roe took over on the hill, walked Luis Aviles, and ended up letting him get to third on a wild pickoff attempt. Aviles came home on a sacrifice fly to tie the game, and then Roe went through the whole pattern again. A.J. Austin walked, Roe’s pickoff attempt sailed into right field and let Austin get around to third, and a sac fly made it 3-2 Bellingham.

Bozett went 2-for-5, while Bailey went 2-for-4 to lead the Cowlitz offense in hits. Nishida went 1-for-3 with a walk, ending the season with a .370 batting average that’s second-best in the WCL.

The loss drops the Black Bears to an even 24-24 record in WCL play to end the year. Factoring in eight non-league games, Cowlitz went 32-26.

Now, the Black Bears players will spread back out across the country, as college ball starts back up with the school year. But both Burres and Bonacci remarked that they hoped down the road, this summer season would mean more than just two normal months of baseball for each player that put on the black, green, and orange.

“I think all of them did get better in certain facets of their game, and that’s why they come here,” Burres said. “But I hope they left with friendships, memories. I know it sounds cliché, but it’s the truth. These things, not a whole lot of guys get to do it, and we had a special group of guys. They gelled really well, they all did a great job together, and I hope they just take this experience with them, and solidify their love for baseball.”

The Cowlitz Black Bears salute and applaud the fans at Story Field following their 3-2 loss to Bellingham to end the 2021 season on Aug. 12.

Cowlitz manager Brian Burres returns the crowd's applause after the Black Bears' season-ending 3-2 loss to Bellingham on Aug. 12 at Story Field. Burres led the Black Bears to a 32-26 record across WCL and non-league play in the 2021 season.

Kelly Austin throws a pitch in the top of the second inning of Cowlitz's 3-2 loss to Bellingham on Aug. 12 at Story Field. Austin added three strikeouts to his league-leading total Thursday, ending his season with 83 between WCL and non-league play.