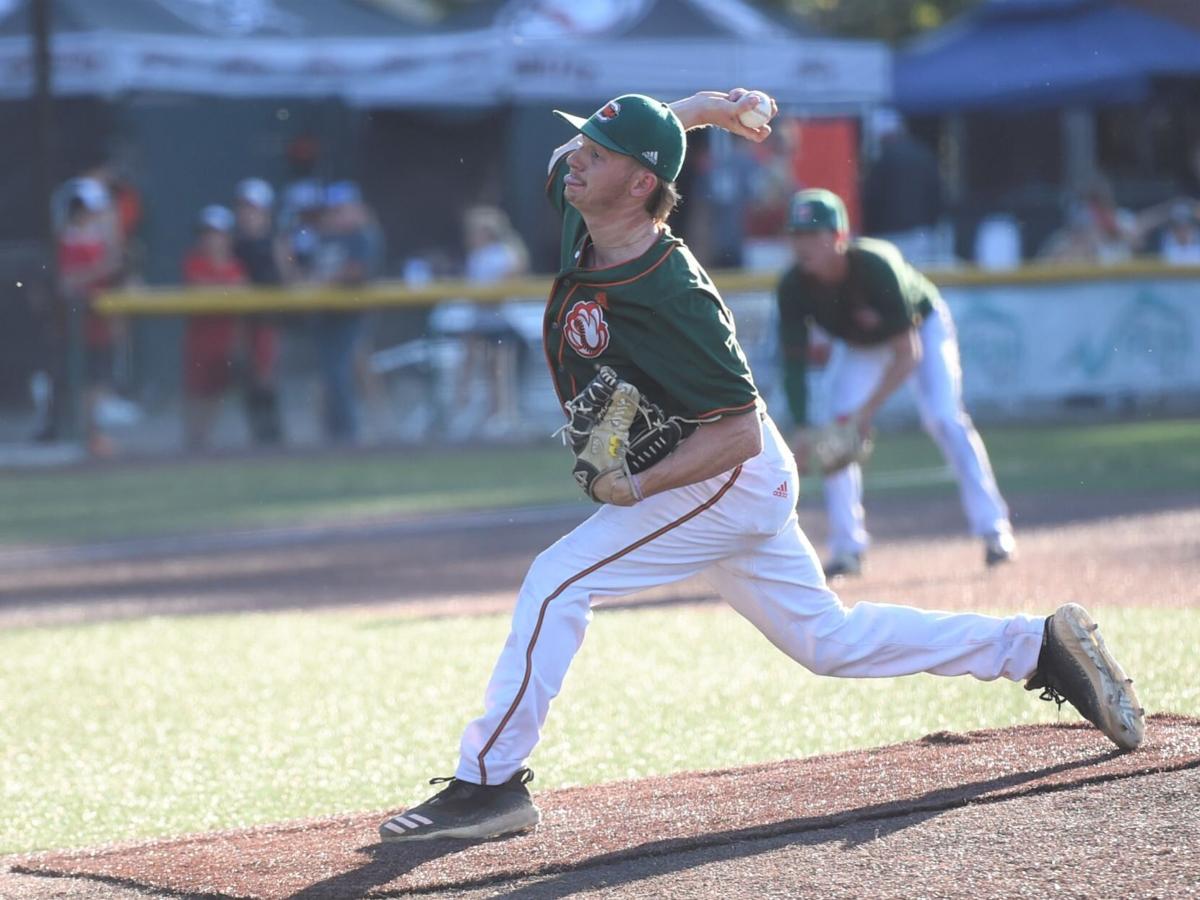 Myles Davis throws a pitch in the top of the third inning of Cowlitz's 3-1 loss to Ridgefield on July 9 at Story Field. Davis allowed three runs on six hits in 5 1/3 innings. 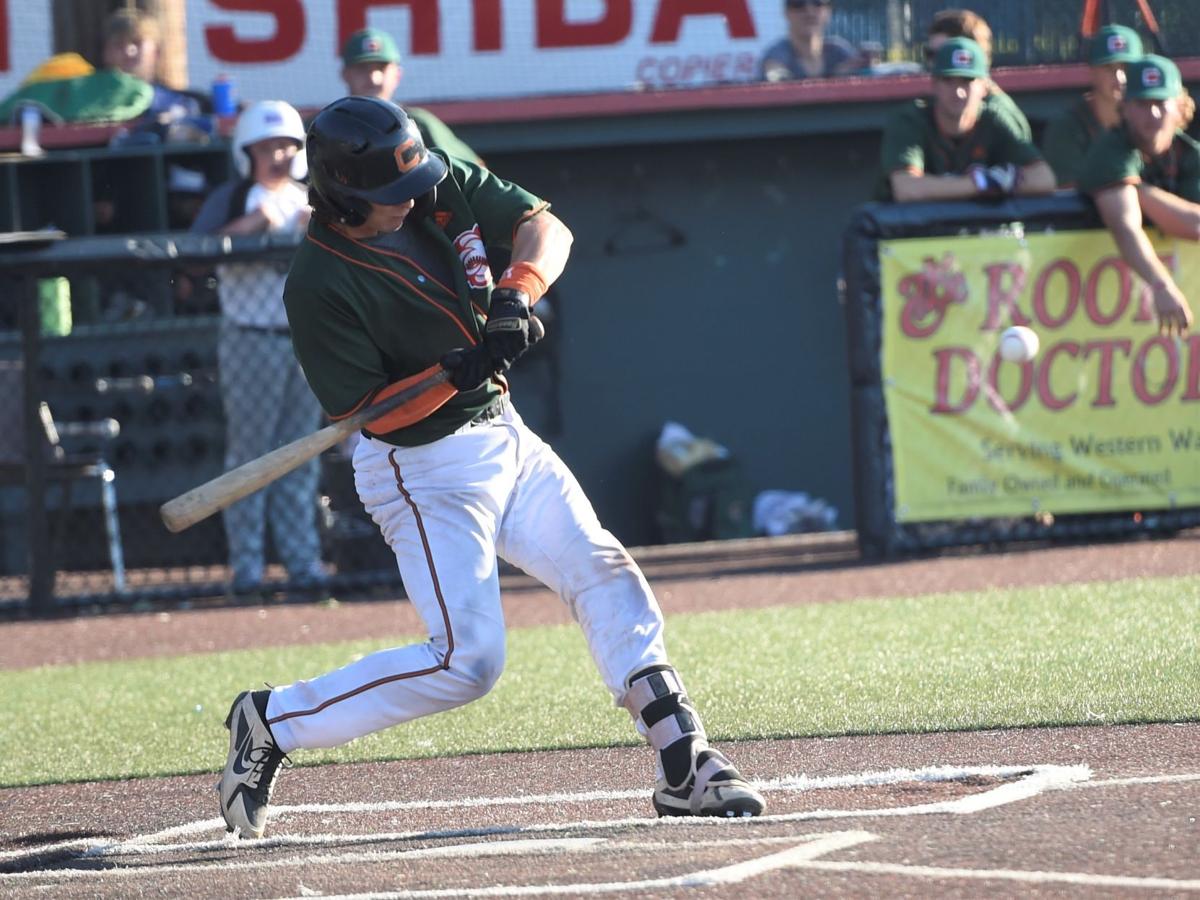 Cowlitz catcher Jacob Burley takes a swing in the bottom of the second inning of the Black Bears' 3-1 loss to Ridgefield on July 9 at Story Field. Burley chopped an infield single, one of just four hits for Cowlitz all night.

Good pitching did enough to beat good hitting on one side for Cowlitz on Friday at Story Field, but the Black Bears’ arms didn’t get the run support they needed on the other in a 3-1 loss to Ridgefield.

“We threw it well, we played defensively really well, and the barrels that we had just didn’t fall,” Black Bears manager Brian Burres said.

Ridgefield came into the game boasting the WCL’s best team batting average and second-to-worst team ERA, while Cowlitz entered with the league’s best ERA and worst average. But while the Black Bears neutralized the Raptors’ hitters, they couldn’t get much traffic on the bases themselves, and when they did, they couldn’t cash in.

After putting just two runners on base in the first five innings, Cowlitz finally started to put something together in the sixth. Matthew Schwarz led off with a single and went to second on a sacrifice bunt. Broc Mortensen singled to left, but it wasn’t deep enough to score Schwarz, putting runners on the corners with one out and the heart of the order coming up. Wilson Weber jammed a grounder to first that wasn’t able to score Schwarz, but Cary Arbolida walked to load the bases for Brock Bozett, who blasted a fly ball out to dead center that carried and carried, but ultimately died on the warning track as Caden Connor tracked it down.

“Sometimes guys make great plays,” Burres said. “That’s literally the game-winning play, because that’s rounding the bases, scoring three, we win 4-3 if that ball drops. That’s just what it is.”

In the eighth, the Black Bears got a rally started for free on a walk and a hit batter, putting two on with one out again, but Weber struck out swinging. Arbolida was finally able to bring a run home with a single up the middle, but Bozett grounded out on the first pitch he saw to end the inning along with Cowlitz’s last real chance.

The Black Bears finished with four hits as a team, and drew four walks. The loss is their third in four games this week — all three came by a combined four runs.

“Our bats, for the most part, put together good at-bats,” Burres said. “It wasn’t like we were getting shoved; we put bat on ball, and sometimes they just don’t fall.”

Myles Davis gave up a bit of hard contact from the get-go for Cowlitz, but was able to work around it until the fourth inning. That’s when the Raptors put up a pair of runs on three hits, a walk, and an error. He settled back down for the fifth, but another run in the sixth on a walk, a balk, a wild pitch, and a single ended his night.

Dale Takalo, Jake Dent, and Keegan Wright combined to see out the final 3 ⅔ innings without letting the deficit grow, holding the top offensive team in the WCL to one hit as a bullpen. The Raptors came into the Columbia River Cup series averaging over seven runs per game, but the Black Bears kept them to less than half of that.

“Our team has done that well all year,” Burres said. “We’ve thrown a lot of strikes, we’ve attacked a lot of hitters. I think we’re going to get better at that, truthfully.”

Cowlitz and Ridgefield were scheduled to play again Saturday at Story Field, then wrap up their rivalry series Sunday.

Myles Davis throws a pitch in the top of the third inning of Cowlitz's 3-1 loss to Ridgefield on July 9 at Story Field. Davis allowed three runs on six hits in 5 1/3 innings.

Cowlitz catcher Jacob Burley takes a swing in the bottom of the second inning of the Black Bears' 3-1 loss to Ridgefield on July 9 at Story Field. Burley chopped an infield single, one of just four hits for Cowlitz all night.