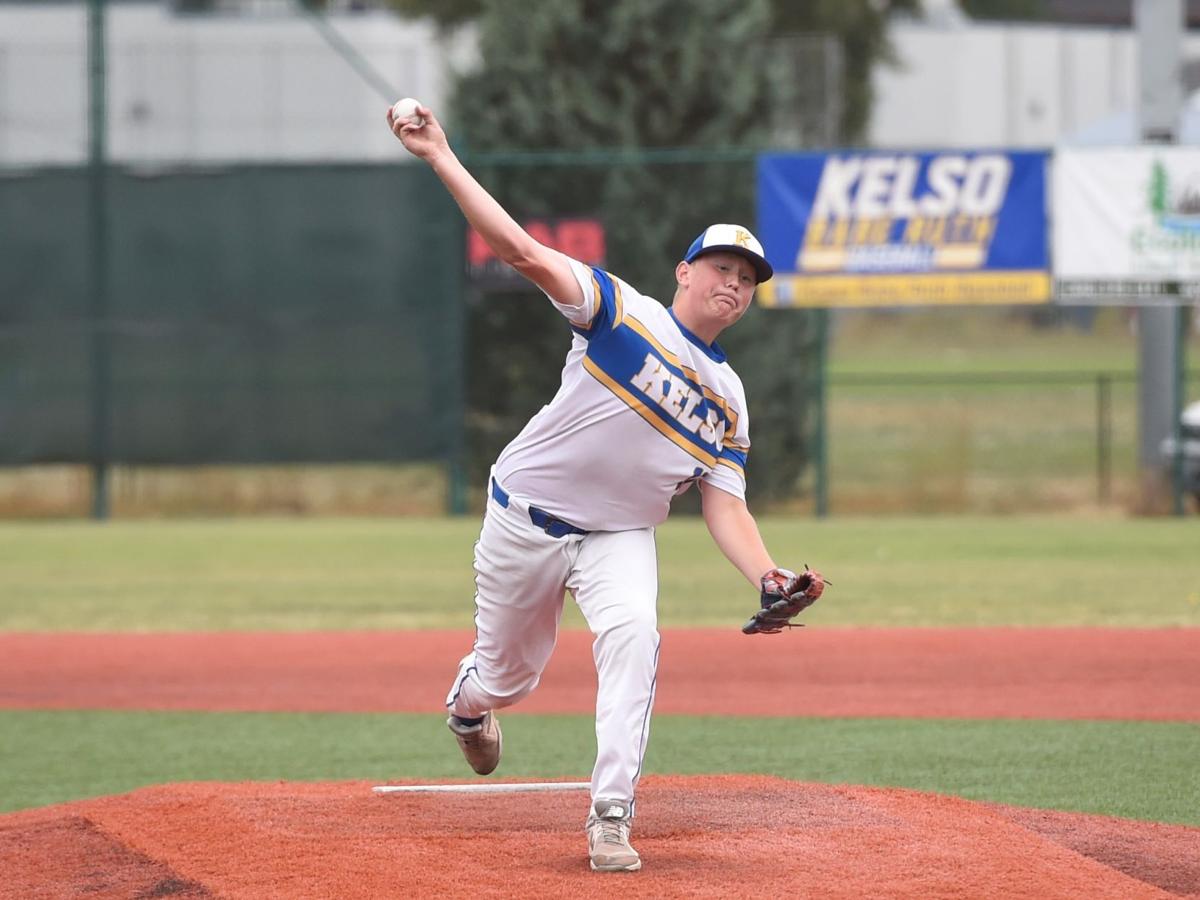 Logan Barker throws a pitch in the top of the seventh inning of Kelso's 4-0 win over Ilwaco on July 31 at Rister Stadium. Barker tossed a complete-game shutout, finishing with five strikeouts and allowing just three hits. 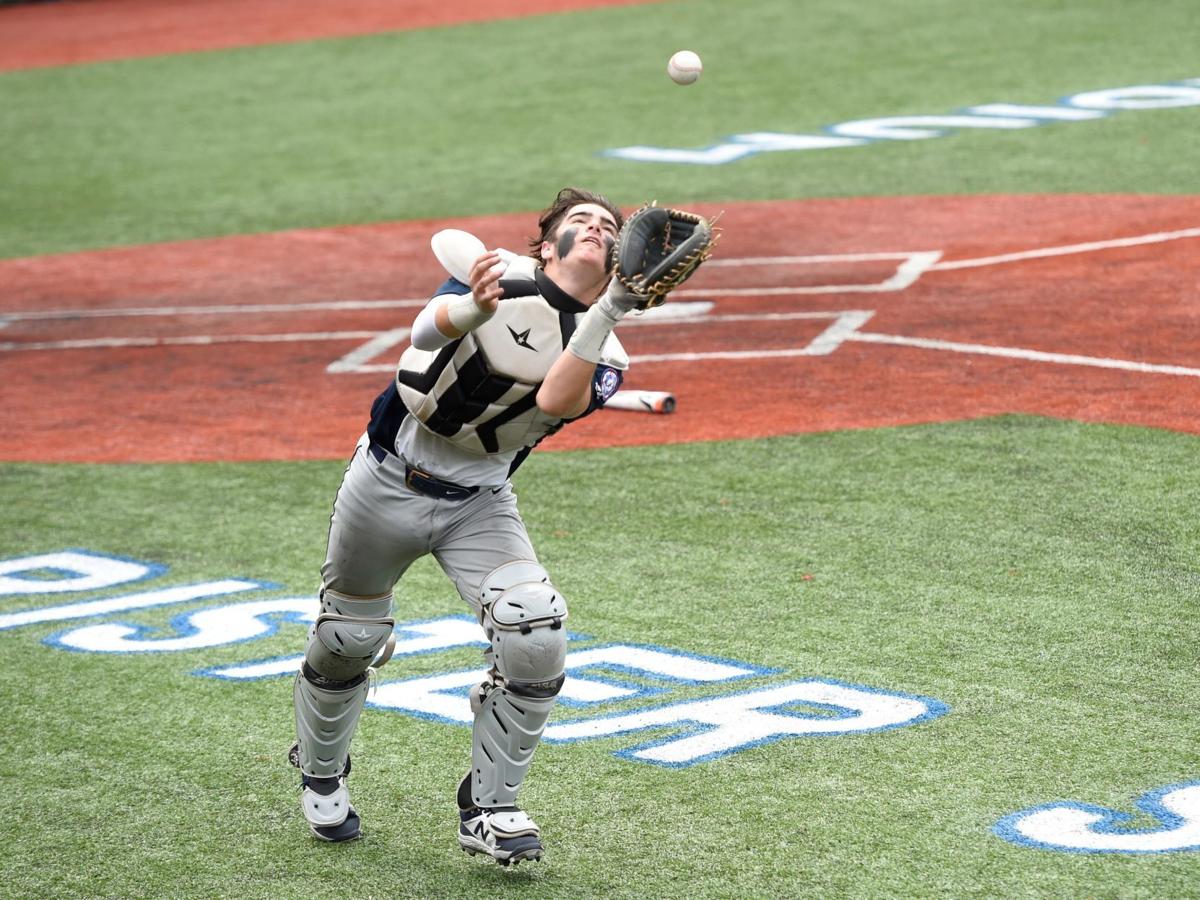 [Note: With its win, Kelso advanced to the regional final against Camas-Washougal, which did not end before press deadline. You can find the recap for that game online at tdn.com, and it will run in next Tuesday’s edition of The Daily News]

KELSO — The hosts got the better of the state champs Saturday afternoon, as Kelso rode the right arm of Logan Barker to a 4-0 win at Rister Stadium in the semifinals of the Babe Ruth Regional tournament.

Barker gave up just three hits and a walk, and didn’t allow a runner to reach third until the top of the sixth inning. He finished with five strikeouts, and did it all in few enough pitches that skipper Jim Hewey had the option to go back to him for an inning or two out of the bullpen in the tournament final against Camas/Washougal Saturday evening.

“He just battles, keeps everybody guessing, and he knows he has a defense behind him that’s going to make plays, and we did,” Hewey said,

The Kelso defense made quick work of nearly everything the Ilwaco bats could put out into the field, particularly the infielders, who got nine of the final 10 outs to keep Barker’s pitch count down.

And in the end, the clean defense was the ultimate difference, because for four innings, Ilwaco’s Kaeden Lyster was just as good — if not better.

“Kaeden Lyster came out there and just was lights-out today, as we’ve seen all year,” Ilwaco skipper Bret Hopkins said.

Lyster gave up just two hits in his first four frames — both to Easton Marshall, both of the infield variety. Aside from that, it was a flurry of grounders, three strikeouts, and a pair of pop-ups; come the fifth inning, Ilwaco’s outfielders had nothing to do but admire the masterpiece from the grass.

That changed in a hurry in the fifth, though. Connor Weseman got it started in a big way, launching a ball the other way that sailed over everybody’s heads and bounced to the wall for a triple. Barker then rolled a grounder that found its way past a glove, bringing Weseman home as an unearned run to break the deadlock.

Then, it started to unravel for Lyster. Carter LaBerge singled, and Parker Hewey drew a walk to load the bases for Isaac Lemmons. Before the first pitch of the at-bat, Lyster tried to catch Lemmons off of first base, but is pick-off attempt short-hopped the bag and bounced away, letting Barker come home.

Trystin Marin added an RBI single to make it 3-0, and Weseman brought another run home in the sixth on a sacrifice fly, but with the way Barker was throwing, the insurance ended up being unnecessary.

The loss ends the tournament run for an Ilwaco side, playing as Longview Babe Ruth, which had a much different makeup and path than the teams it was playing at Rister this past week.

Instead of being a regional side, composed of players from around an area, Hopkins made his team out of the age-eligible players from his squad at Ilwaco High School — and the Fishermen had 12 underclassmen on varsity this past season. Nine of those came together to form the core of the 12-player team.

The squad went from being the youngest side in the Pacfic 2B League in the spring, to playing against 18u teams in the summer, taking a quick break to with the Southern Washington state championship earlier in July and then take part in regionals.

“The dance has to end eventually, I guess,” Hopkins said. “I told the kids we couldn’t have represented a little 2B school any better than we did today. There are more kids in one grade here (at Kelso) than we have in our high school, middle school, and probably both elementary schools. To have a group of kids like this is like winning the lottery three times in a row.”

Now Ilwaco’s players will go back to be Fishermen proper, first for the football team — for which Hopkins is an assistant.

Kelso, meanwhile, got itself a chance to punch a ticket to the Babe Ruth World Series in Eagle Pass, Texas.

CFB Playoffs: What is the new timeline for the extended playoffs?

Mariners notebook: A season full of swing changes starting to pay off for Dylan Moore

OAKLAND, Calif. — Dylan Moore smirked for a moment when he was asked about some recent swing changes.

If this is Kyle Seager's last season in a Mariners uniform, he's going to make it count

HOUSTON — Kyle Seager spotted the young fan in the stands of Minute Maid Park, holding a sign with his name on it about 20 rows from the dugout.

ARLINGTON, Texas (AP) — Right-hander Kohei Arihara was designated for assignment Sunday by the Texas Rangers, who signed the Japanese pitcher to a two-year contract last winter.

Barria scheduled to start for Los Angeles against Houston

OAKLAND, Calif. (AP) — Oakland's starting pitchers had been so dominant during this recent stretch until Kyle Seager and Seattle swung away and took it to Sean Manaea.

A look at what's happening around the majors on Tuesday:

Logan Barker throws a pitch in the top of the seventh inning of Kelso's 4-0 win over Ilwaco on July 31 at Rister Stadium. Barker tossed a complete-game shutout, finishing with five strikeouts and allowing just three hits.