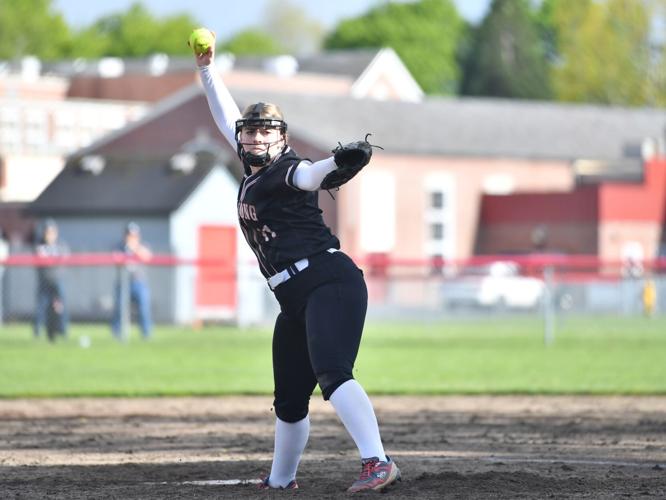 R.A. Long senior Miranda Bergquist throws a pitch in the top of the fourth inning of the Lumberjills' 14-0 win over Washougal at home on May 9. 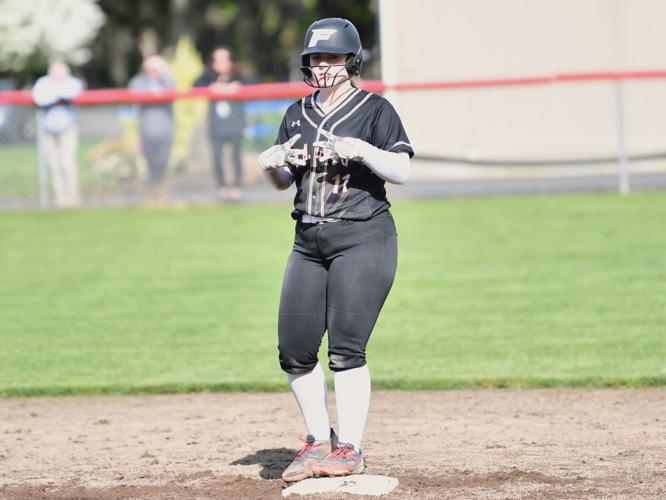 Miranda Bergquist throws her dubs up in support of UW after smacking a 2-RBI double in the bottom of the third inning of R.A. Long's 14-0 win over Washougal on May 9.

With a whole up for grabs in the 2A GSHL softball world going into the final week of the regular season, the R.A. Long softball team got into the homestretch fast Monday, run-ruling Washougal 14-0 in five innings.

The Lumberjills started the day in fourth place in the league, a half game behind Hockinson and Columbia River, who were tied for second. With the Hawks losing to top-of-the-league Ridgefield and the Rapids idle until Tuesday, the result over the Panthers jumps the Jills into their own tie for second with River.

With so much going on around it in the league, all R.A. Long can do is take care of its own business, and that’s what the Lumberjills did Monday. Things started with Miranda Bergquist in the circle, and the senior delivered another solid outing with four strikeouts in five shutout frames, allowing two hits and one walk.

It’s the second time this season Bergquist has shut out Washougal, after no-hitting the Panthers back on April 21.

The senior also led the Lumberjills at the plate, going 2-for-3 with two RBIs on a double in the third innings. She also reached on an error and came around to score three runs.

Lower in the order, fellow senior Mylee Grimm brought the power with a solo home run in the bottom of the second, and added an RBI single to her line.

The Lumberjills started getting Bergquist run support early, plating two runs for free in the first on an error and a host walks. Four more runs came home in the second, before Washougal’s wheels fell off in the third. As R.A. Long emptied the bench of swing plays to take a crack at the plate, most simply stood up there and took four balls to go to first, before Bergquist sent one to the wall to blow it open.

Leaving the run-rule runner on third base, the Lumberjills had to go back out to the field for the fourth and fifth innings, and while three Panthers reached base on fielding errors, Bergquist didn’t allow a run to come home.

R.A. Long (10-6, 9-4 league) won’t wait around for their next matchup, facing Hudson’s Bay on Tuesday before going to Hockinson for a pivotal matchup on Wednesday..

Going into the final week occupying the fifth and final postseason spot in the 2A GSHL, the Mark Morris softball team held serve at home Monday, run-ruling Fort Vancouver 18-3 in four innings on senior day.

The Monarchs blasted out nine runs in the bottom of the first inning to make things easy on Elise Aguirre in the circle, and kept adding to the lead as the day went on.

“The girls really showed out for senior day today,” MM coach Chris Mejia said. “The bats got started early and often today to make today special for the six seniors we had.”

The Monarchs combined for 17 hits, with every starter reaching base at least once, and the five seniors in the lineup — Aguirre didn’t hit — totaled six knocks. Three of those came off the bat of Ashley Provolt, who went 3-for-4 with two runs scored and an RBI.

Behind Provolt, Emily Foytack went 2-for-2 with two RBIs, before Brooklyn Hoffman subbed in for her and went 2-for-2 herself in the No. 3 spot in the order. Down the No. 5 slot, junior Megan Jenkins led the way with a 4-for-4 outing, driving in four runs and finishing a home run shy of the cycle.

In the circle, Aguirre gave up four hits and struck out six in the shortened complete game.

Mark Morris (9-7. 8-5 league), which has arguably the hardest final stretch of anyone in the 2A GSHL, now enters a gauntlet of three games against teams above it in the league standings in four days. First up is a Tuesday date at Columbia River, followed by a Wednesday matchup at Ridgefield.

VANCOUVER — On the outside of postseason position looking in sits the Woodland softball team, which has a chance to make the top five in the 2A GSHL but will need some help. None of that will matter if the Beavers don’t keep winning, and they did just that Monday on the road in convincing fashion, 21-2 over Hudson’s Bay in four innings.

Woodland did the bulk of its damage in eight-run frames in the first and the fourth, leading 21-0 before the Eagles scraped two consolation runs in the bottom of the fourth on their lone hit of the day — a home run.

Aside from that, Bay could manage little against Woodland’s Gabi Silveria, save for a handful of walks; she finished her outing with nine strikeouts, and just four balls in play.

Silveria topped Bay’s offense by herself, going 4-for-4 at the plate with a double , a triple, three runs scored, and three more driven in. Coco MacDonald also went 4-for-4, hitting a double and logging two RBIs.

Emily Hughes added a 3-for-4 outing, including one of two home runs for Woodland on the day; Jayden Roth had the other. Behind Silveria, Alyson Russell was 3-for-3 with a walk, scoring two runs and driving two more in.

Woodland (9-9, 7-7 league) gets another game against a team near the bottom of the standings next, facing Washougal on Wednesday.

The War of the Border basketball tournament returned in exciting fashion over the weekend, with 46 teams from Washington and Oregon duking it …

US coach makes dramatic rescue of artistic swimmer at worlds

Andrea Fuentes prevented a tragedy at the swimming world championships with her quick reaction.

Battle is joined at the War of the Border

War was resumed in full on the hardwood Saturday, with the 28th holding of the War of the Border taking place all over Longview and Kelso.

In a season defined by the rainout it would have been easy to fold up the tent and pack it in. Without a doubt some did just that, but not eve…

The Daily News’ 2022 All-Area team features players from the heart of the coverage area and a few State champions from the fringes. In the lis…

That Jadon Williamson took to the hill at David B. Story Field on June 8 was far from a new occurrence.

U.S. swimmer rescued by coach after fainting at world championships

R.A. Long senior Miranda Bergquist throws a pitch in the top of the fourth inning of the Lumberjills' 14-0 win over Washougal at home on May 9.

Miranda Bergquist throws her dubs up in support of UW after smacking a 2-RBI double in the bottom of the third inning of R.A. Long's 14-0 win over Washougal on May 9.