RENTON — Less than 24-hours after their only loss of the season to a fellow 2B foe the Chinooks were back on the nightmare turf of Memorial Stadium trying to salvage what was left of the season. Over 40 minutes and some stoppage time Kalama proved that they still belong in the conversation for best team in the state after defeating Highland 3-2 to secure a third place finish in the 1B/2B girls soccer state tournament.

“It was more just our will to want to win because all of us were pretty banged up, just because of the field and just how aggressive these games are.,” Kalama’s Josie Brandenburg said. “In the regular season we were playing aggressive teams but it was nothing like this because everybody wants to get as far as they can.”

To be sure, there was a certain energy missing from the Kalama sideline in the bronze trophy game. After all, the Chinooks set out to defend their 2021 State championship by doubling down on their station at the top of the heap. And while a third place finish is better than most can ever dream of, it was a full two steps down from where Kalama believes it belongs.

Still, the win was as close to a storybook ending as the ‘Nooks could manage after suffering a 5-1 loss to Highland in the semifinals on Friday night. With a repeat out the window like an apple core on the freeway, Kalama made sure to salvage what they could for their seniors before it was too late.

“It is what it is. You can’t win every game,” Kalama coach John Bates said. “We can’t all be champions.”

It didn’t take long for Kalama to stake out their lead. Eighth grader Sienna DiCristina put the Chinooks up 1-0 in the ninth minute when she gathered a free ball on the wing, took it in close and slotted home an angled shot past the Scots’ keeper.

In the 27th minute Kalama went up 2-0 when Josie Brandenburg took control of the ball on the wing from about 18 yards out and calmly lofted a rainbow up and over the outstretched arms of the scrambling Highland goalie. Eight minutes later Brandenburg delivered what would be the difference maker on a corner kick from the grandstand side that arched high over the scrum and untouched into the back corner of the net.

“That was a beautiful kill,” Bates said. “It’s what we work on at practice. We take out time on set pieces.”

Down by three goals the Scots weren’t going to head for home without a fight. A handball in the box in the 35th minute set up Anahi Garcia for a free kick that she put in the net to put Highland on the board before the intermission.

That 3-1 score lasted through the orange slices at intermission until the 61st minute when a corner kick from Highland bounced around in front of the goal and Maricza Mendoza used the scrum to her advantage to slot it home into a relatively open goal.

With their lead trimmed to just one score the Chinooks steeled themselves, rubbed figurative dirt from the cut rate artificial turf on their boo-boos and got to work holding on for the win. Defenders Elyse DiCristina, Marin Ripp, Ava Ripp and Delaney Rinard were instrumental in holding off the Scots down the stretch.

“It got a little bit shaky but we’ve got a better defense than them, it’s just (about) getting it out),” Bates said. “We knew they were going to make a push. They don’t want to lose and we always have good games against them, but our girls pulled it out.”

For what it’s worth, the Final Four of the state tournament is the only time all season that the Chinooks have been asked to play matches on back-to-back days. With frigid temperatures, underperforming artificial turf, and a couple of physical contests on the docket it was a big lift for the Chinooks.

“It was good. We had to dig deep there in the second half,” Bates said. “I knew they’d push us. We were gassed, man. Just heavy legs right there.”

Brandenburg agreed with her coach’s assessment.

“When I fell everything just started swelling up. It was not fun,” the junior midfielder said.

The win sends Kalama’s three seniors — Sophie Given, Elyse DiCristina and Jasmine Dunlap — out with one more win and one more trophy to their name. It caps a run of success that has put the Chinooks squarely on the map of teams to watch out for at the state tournament year in and year out.

“I’m proud of them. From what they’ve become over the last five years is just phenomenal. The win-loss ratio, the trophies and stuff like that,” Bates said. “I can’t say enough about them. They are tough. They work out in practice. They are an influence on the team… I’m so happy for all of them.”

An in depth preview of the R.A. Long, Mark Morris, and Kelso high school bowling teams for the 2022-23 winter season.

Official Viewpoint: Young zebra says fans could benefit from some time on the whistle

In the midst of his first season working as a freelance sports reporter Dacota Haynes made the time to become a football official. Now he says fans, coaches, and media could benefit from a change in perspective.

Arizona Cardinals offensive line coach Sean Kugler was dismissed by the organization due to an alleged groping incident on Sunday night in Mexico City after the team's arrival for Monday's game against the San Francisco 49ers.

The 1A TriCo All-League volleyball lists including Castle Rock's Paige Kessler as Defensive Player of the Year.

Michael Penix Jr. threw for 485 yards and had five total touchdowns, and No. 12 Washington reclaimed the Apple Cup with a wild 51-33 win over Washington State. A year after the Huskies watched the Cougars celebrate snapping a seven-game losing streak on the turf of Husky Stadium, Washington kept alive its hopes for a New Year’s Six bowl game thanks to its standout quarterback and a handful of defensive stops in the second half. Washington outscored the Cougars 23-6 in the second half. Washington’s victory also sent Utah to the Pac-12 championship game as the opponent for Southern California next week in Las Vegas. Cameron Ward threw for 322 yards and two touchdowns for Washington State.

RENTON — The Chinooks knew they were going to be in for a challenge Friday. Facing off with Saint George’s in the semifinal of the 1B/2B girls…

The 1A TriCo All-League football team including League MVP Stephen Ibsen from Castle Rock, along with fellow Rockets Lane Partridge, David Garcia and Owen Langdon on the first team.

Qatar's last-minute decision to ban alcohol at World Cup stadiums has left Budweiser with loads of beer on its hands. The company has an innovative solution to offload it. 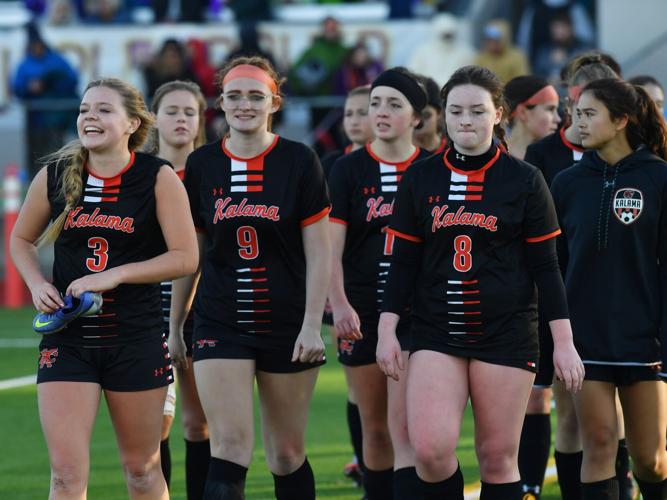 The Kalama soccer team soaks up the scenery after capturing the third place trophy at the 1B/2B girls soccer state tournament with a 3-2 win over Highland on Saturday at Renton Memorial Stadium. 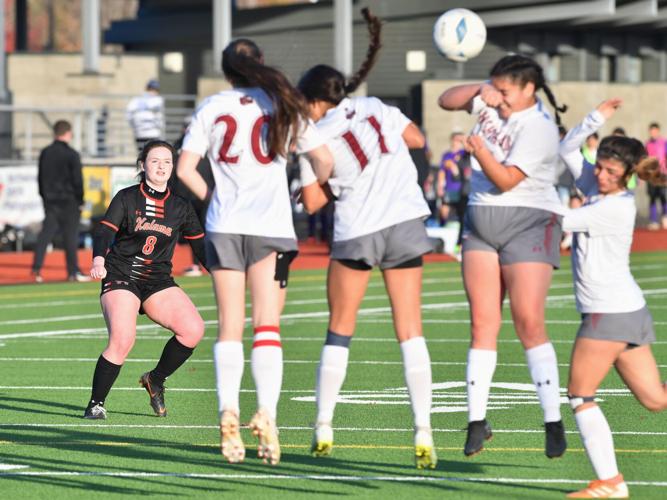 Kalama’s Sophie Given puts up a shot on a free kick as a wall of Highland defenders try to body the ball during the third place game of the 1B/2B girls soccer state tournament Saturday at Renton Memorial Stadium. The Chinooks won 3-2. 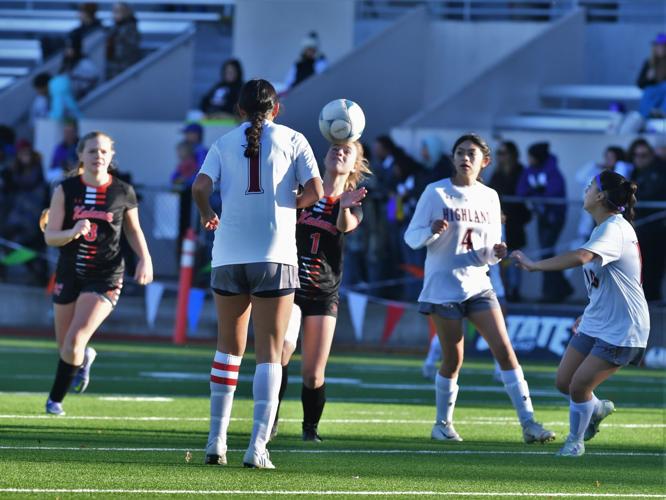 Kalama’s Bridgette Hollifield uses her head to her advantage during the third place game of the 1B/2B girls soccer state tournament on Saturday at Renton Memorial Stadium. 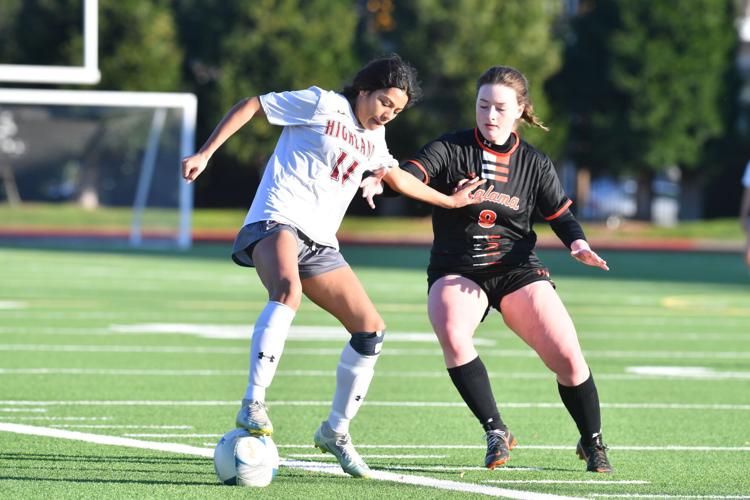 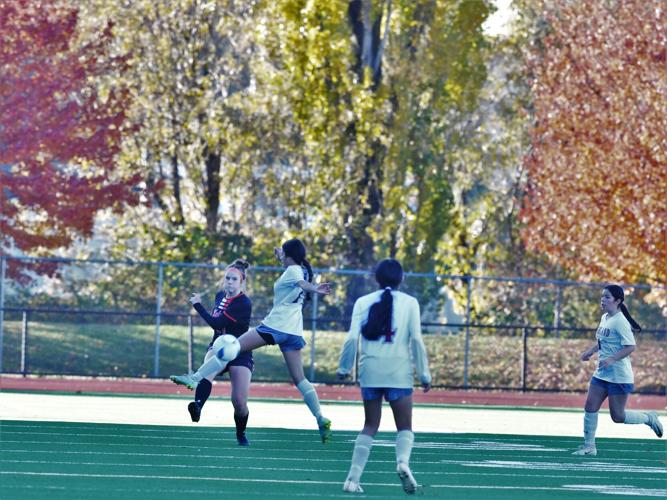 Kalama’s Aubrey Doerty clears the ball from the backline during the third place match of the 1B/2B girls soccer state tournament, Saturday at Renton Memorial Stadium. 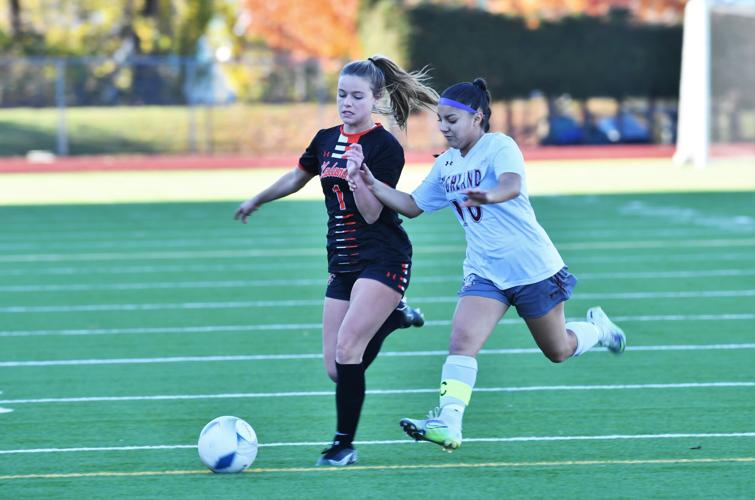 Kalama’s Bridgette Hollifield battle for possession of the ball against Highland’s Anahi Garcia during the third place match of the 1B/2B girls soccer state tournament, Saturday at Renton Memorial Stadium. 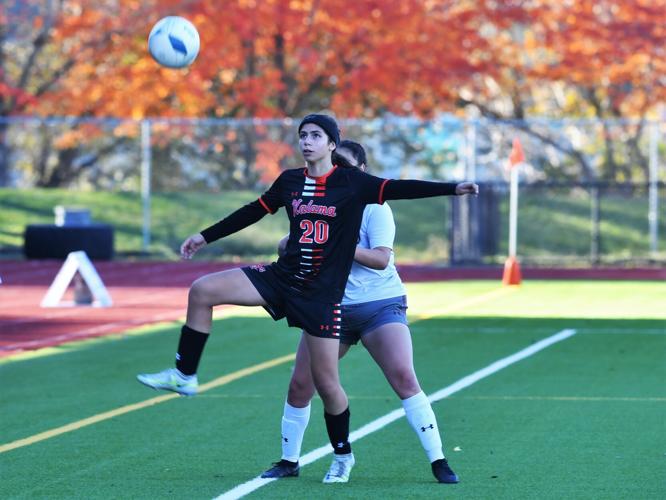 Kalama’s Sienna DiCristina makes a move to control a free ball as she boxes out a Highland defender in the third place match of the 1B/2B girls soccer state tournament, Saturday at Renton Memorial Stadium. 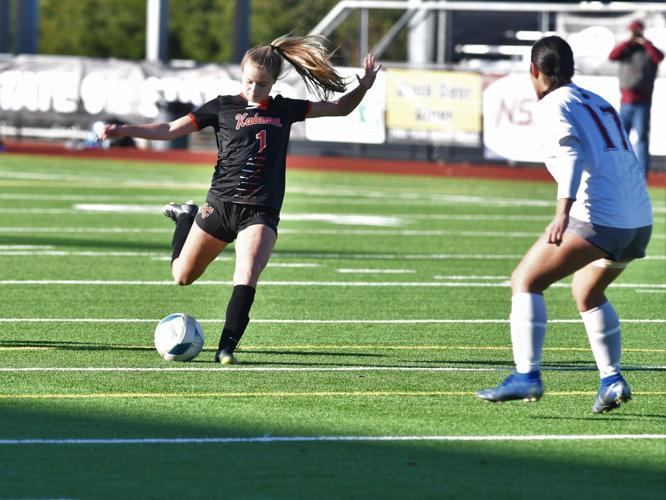 Kalama’s Bridgette Hollifield rears back for a shot on goal against Highland in the third place match of the 1B/2B girls soccer match, Saturday at Renton Memorial Stadium.