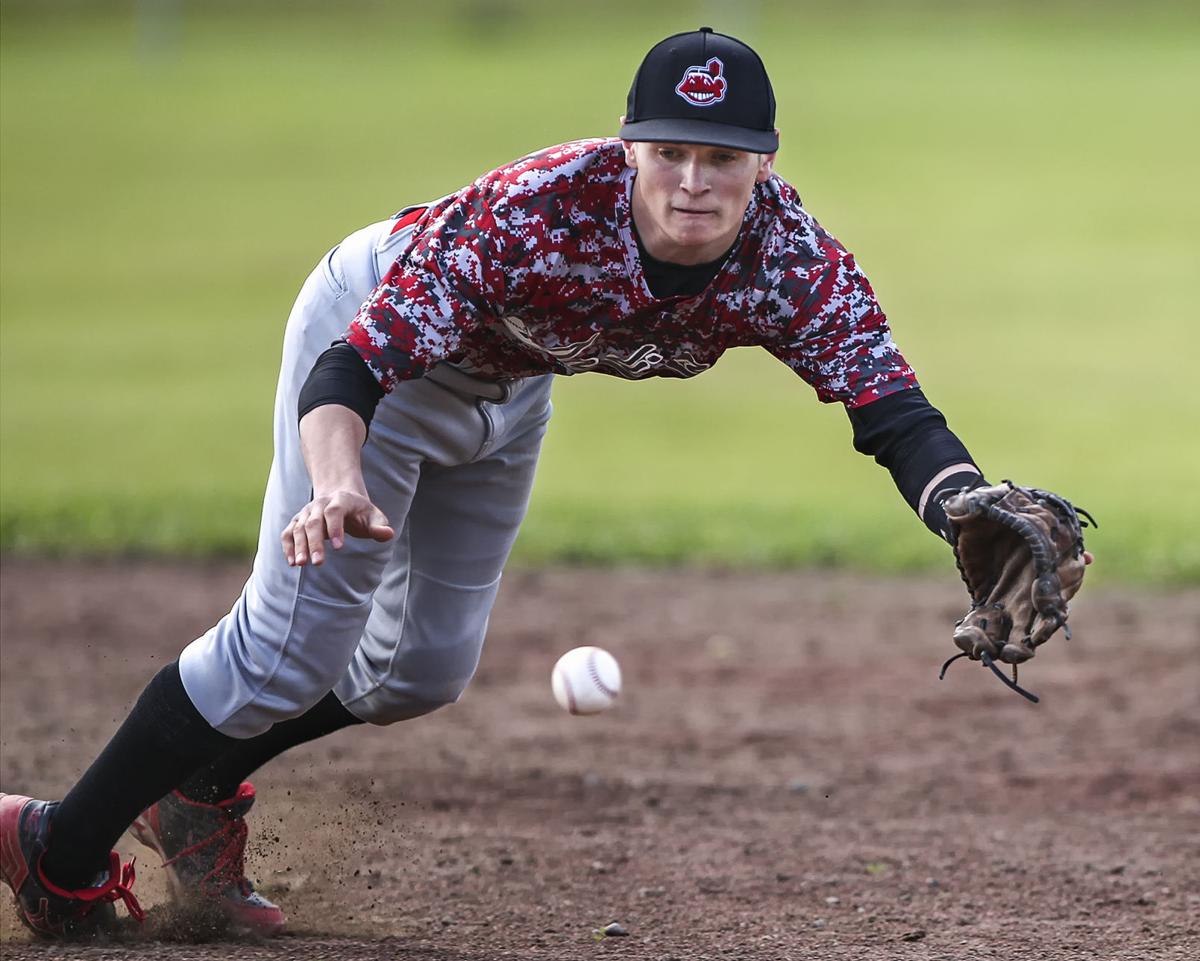 Toldeo second baseman Kolt Korpi dives to knock down a ground ball against Pe Ell/Willapa Valley in a 2015 game. 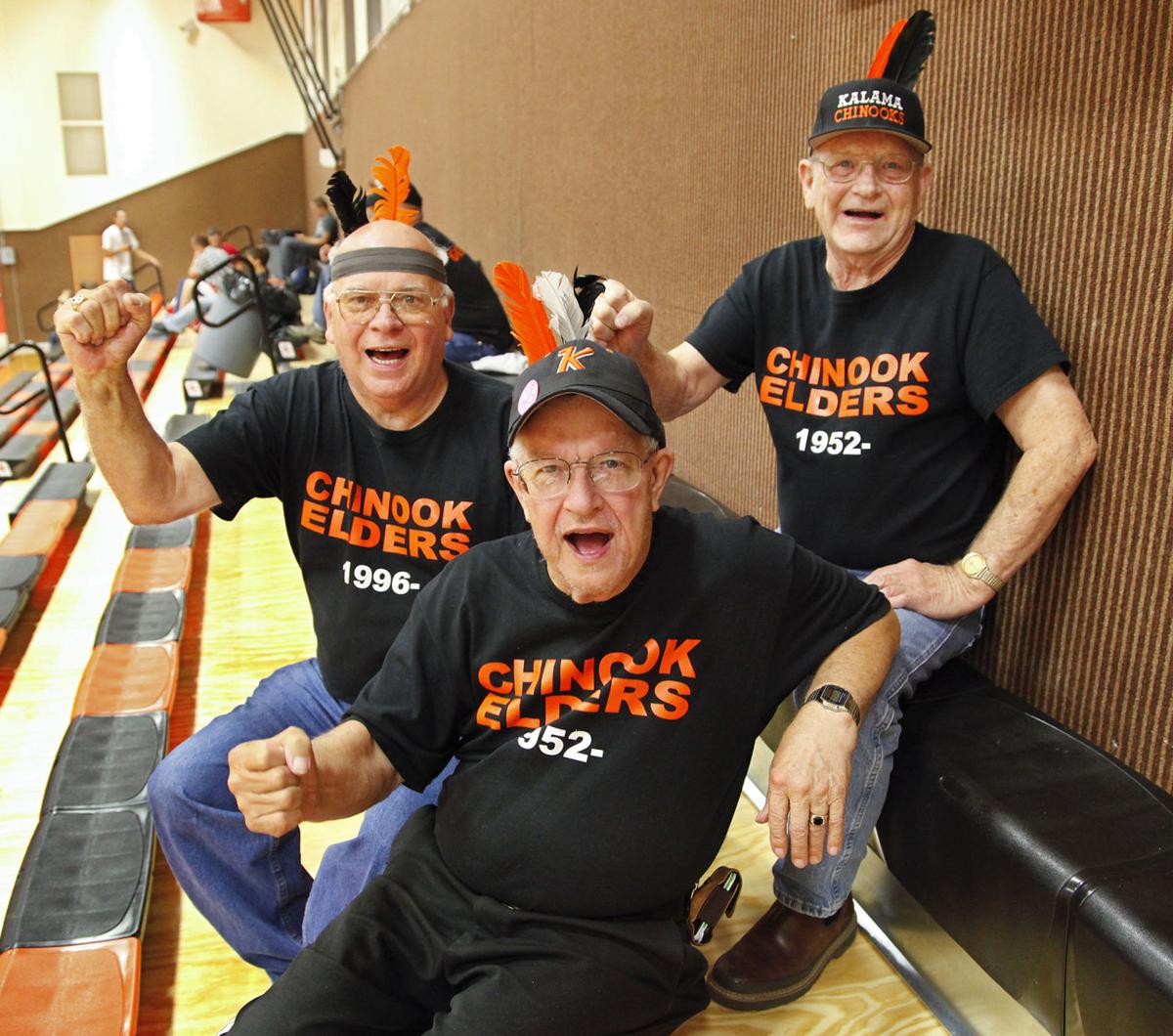 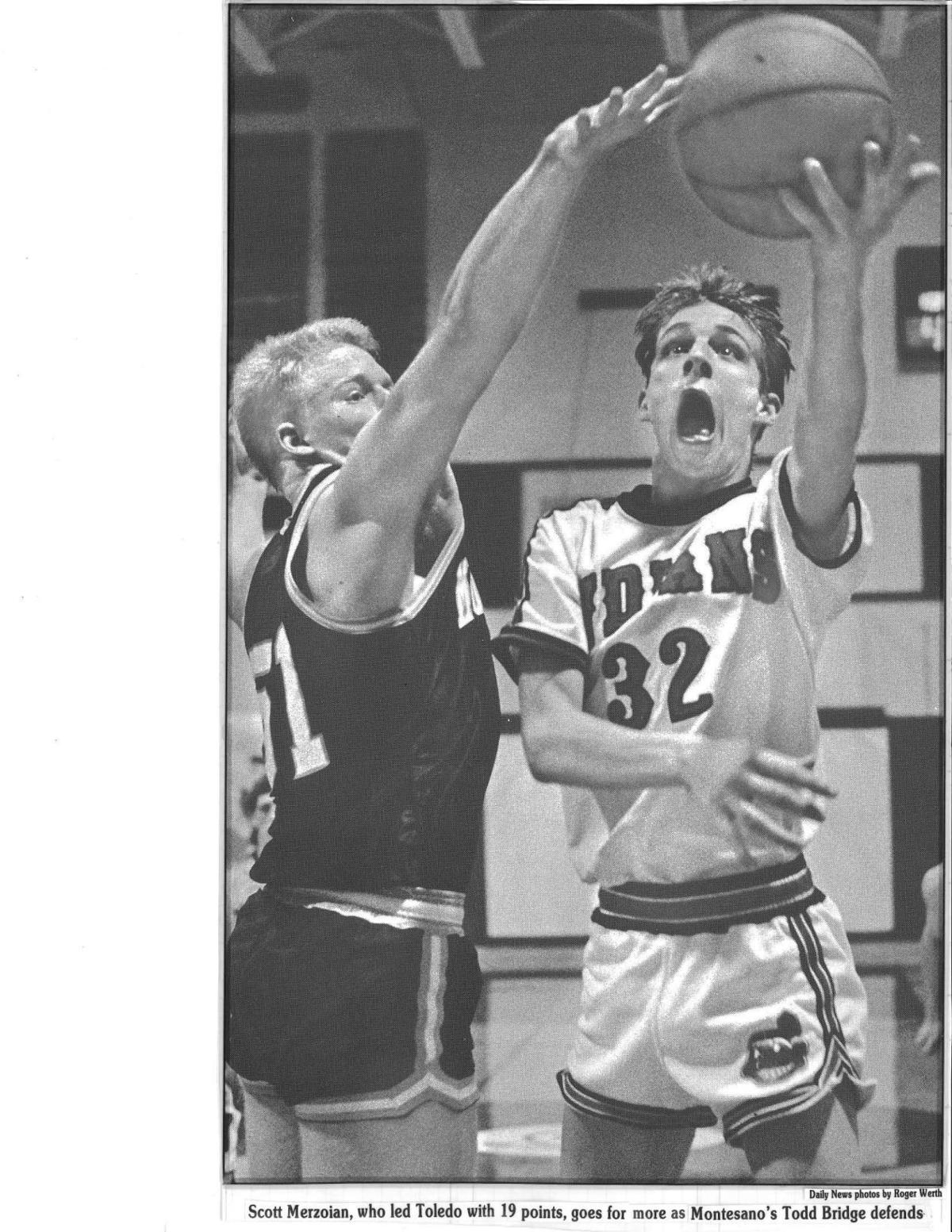 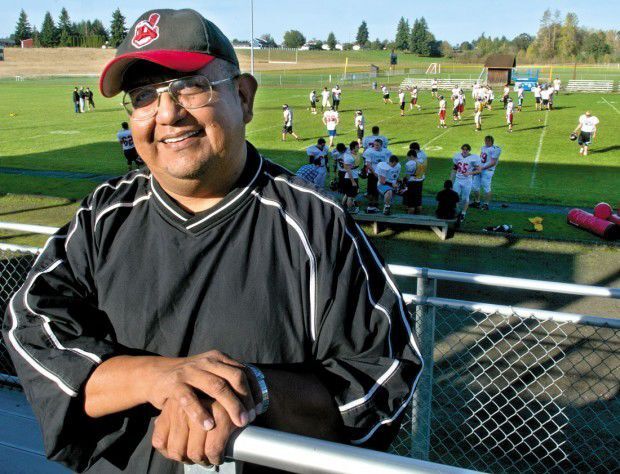 Longtime Toledo athletics volunteer Gary Ike poses for a photo wearing his "Chief Wahoo" Indians hat during football practice in this photo from 2010. Ike died in 2011. 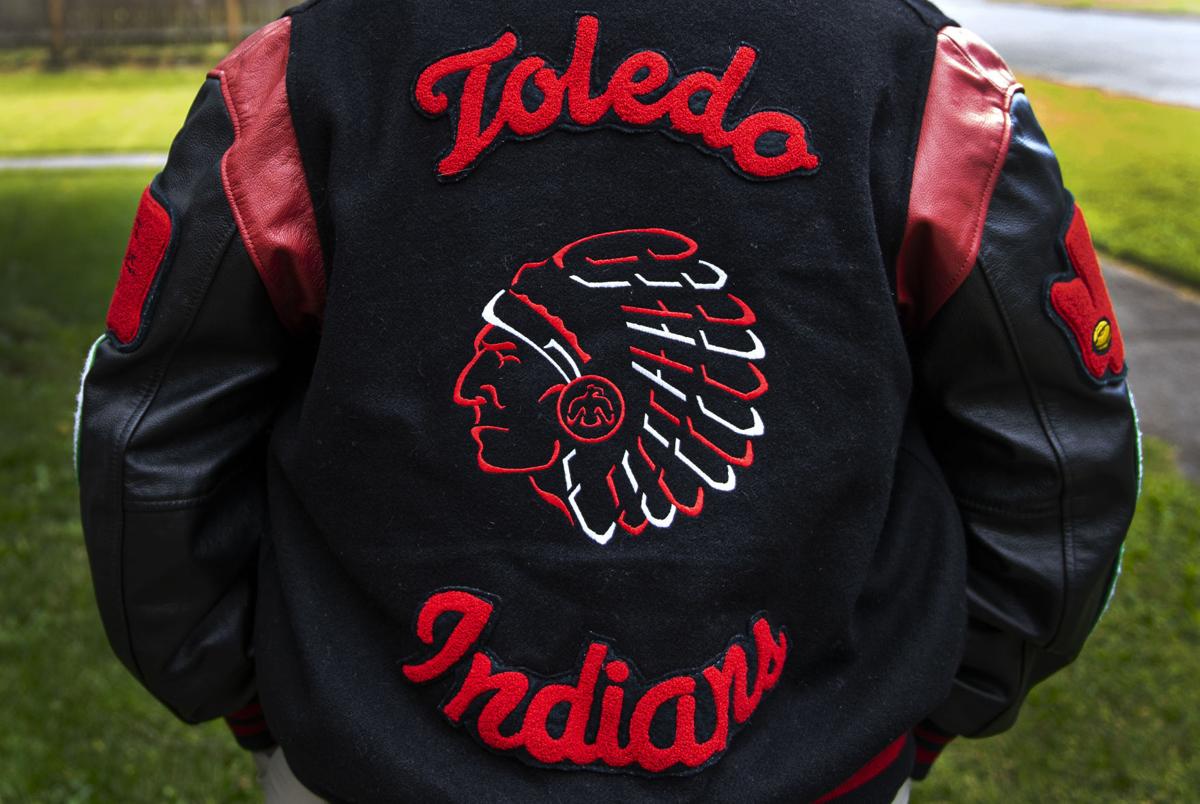 In the 1960s, Chief Don Lelooska carved a 140-foot totem pole from a single red cedar tree. That ornate timber was placed with reverence at the Kalama marina in 1974, where it stood until 2018 when weather and commerce conspired to bring it down.

Clearly, Lelooska saw enough of a connection between Kalama and local Native American culture to take the time to create such a visible monument and over time it became a beloved landmark.

But where is the line between honor and ridicule, between celebration and mocking, between appreciation and appropriation and between actual history versus whitewashing?

That’s a line the world of sports has walked for decades, every so often veering off course before glancing up to find its way again. All across the country tough questions are again being asked about Native American imagery as it relates to mascots and sports teams.

“It’s foreign, and unfortunately it’s like a lot of Jim Crow,” Cowlitz Indian Tribal Council Member Mike Iyall said. “If you’re not the butt of it, it doesn’t seem so deeply harmful. But if you are the butt of it, you feel it.”

In short, Iyall believes that the days of ethnic caricature mascots are coming to an end.

These questions haven’t materialized out of thin air. They’ve always been there. But in 2020 in the Lower Columbia, more people are listening.

At high schools in Toledo, Kalama, and Vancouver, mascot questions are front and center.

Columbia River High School currently has no mascot at all after the Vancouver Public Schools Board of Directors voted last week to retire Columbia River’s Chieftains logo and nickname.

As Iyall pointed out, the headdress iconography of that mascot was more reminiscent of Great Plains tribes than any Native Americans from the Pacific Northwest. Iyall said the tribe expressed support for the decision while it was under consideration.

“Chieftains, they’re not in Vancouver,” Iyall said. “That’s not what we called our leaders. There’s a lot that was just foreign about it.”

In no uncertain terms, the study found the mascots harmful.

“Although most people in the U.S. do not perceive Native American mascots as problematic, all of the academic studies undertaken to study the psychosocial effects of these mascots demonstrate either direct negative effects on Native Americans or that these mascots activate, reflect, and/or reinforce stereotyping and prejudice among non-Native persons,” said the authors.

Kalama and Toledo have their own problems with out-of-culture imagery.

The Kalama mascot, “Charlie Chinook,” used to be adorned with a hatchet in one hand and a scalp in the other along with numerous stereotypical accoutrements that do not match the culture of the Chinook tribe.

Likewise, Toledo has a history of using headdress imagery, the tomahawk chop and a caricature mascot costume. For many years Toledo High School even displayed a totem pole in front of the school until the Cowlitz Tribe informed the school that the totem was not an authentic piece of art.

“We had a totem pole in front of the high school, but the Cowlitz Tribe is not a tribe that used totem poles. It was made by a chainsaw carver at the county fair back in the ‘80s and we decided we should retire that,” Toledo Superintendent Chris Rust said.

Those types of changes are far from exclusive to the regional prep scene, though. This year has seen a new wave of mascot changes in venerable pro sports franchises.

Washington D.C’s National Football League team dropped its Redskins name in favor of “The Washington Football Team” this year after decades of hand-wringing, turning something offensive into something awkward but innocuous. .

The Kansas City Chiefs have backed away from headdresses and the tomahawk chop, even though the team still allowed a fan interactive chant at Arrowhead Stadium during the season opener Thursday.

The Cleveland Indians of Major League Baseball have said that their organization is open to considering a name change. They’ve also made moves to reduce the size of their Chief Wahoo mascot while simultaneously reducing the frequency of use of that caricature image entirely. Changes aren’t sweeping across MLB uniformly, as the Atlanta Braves have so far resisted any similar changes.

More than five years ago the Oregon School Activities Association asked all of its member schools to drop Native American mascots unless they were able to gain direct permission from area tribes. The NCAA made schools drop such mascots nearly 50 years ago, with exceptions like the University of Florida Seminoles, the Utah Utes and the University of Illinois Fightin’ Illini where tribes and schools have agreements in place.

Toledo High School and the Cowlitz Tribe have a similar, if informal, working relationship that has resulted in some minor changes over the years. Most recently the tribe asked that students not wear headdresses at games, as they aren’t part of the local culture. Toledo agreed.

The school also agreed to phase out its Indian mascot costume, along with the three Chief Wahoo logos that adorned the baseball field.

But then there’s Gary Ike, who still has a place reserved for him at George Murdock Gymnasium despite having passed away nearly a decade ago. Ike, a Cowlitz Tribal member who volunteered for decades with Toledo athletics, famously wore a hat emblazoned with Chief Wahoo, never once thinking it was an insult.

“It never crossed my mind that it might be offensive,” Toledo Athletic Director Grady Fallon said. “To me it’s more of a respect thing. You’re not downgrading the Indians, you’re saying this is cool. It’s the same thing with the Highlanders. It’s a group of people that you are uplifting.”

Toledo Superintendent Rust said the Cowlitz tribe has OK’d the school’s use of the dreamcatcher logo — a stylized T inside a circle with feathers draped to one side — but as recently as 2019 Toledo’s football helmets sported the same spear as Florida State’s. They’re the Seminoles, a collection of tribes that lived in current day Florida, Alabama and Georgia.

Still, as Toledo renovates its high school, administrators are working to remove any remaining problematic imagery.

He noted Toledo’s willingness to retire the totem pole and the mascot costume, which featured all of the same racially charged tropes as Chief Wahoo, as a step in the right direction.

“How we retired those things, in the tradition of indigenous cultures, things get imbued with spirit, so even though the totem pole was a misappropriation of cultural symbols, it did have spirit and so you can’t just throw it on the trash heap,” Rust explained.

“Same with the costume,” he said. “So in collaboration with some members of the tribe we removed the totem pole, we cut it up, and we burned it in a fire and we retired the costume in the same way — on a fire.”

Meanwhile, Kalama has also made significant strides with its mascot, the Chinooks.

For decades, Kalama’s chosen mascot was “Charlie Chinook,” an unflattering caricature that featured a wide, smiling face with oversized teeth, a tomahawk in one hand and a scalp in the other.

Over the last 20 years Kalama redesigned Charlie, most notably by removing the scalp and replacing it with a diploma. It also did away with tomahawk-chop-style chants at games after a request from the Cowlitz Tribe, and has essentially abandoned the Charlie Chinook logo on its uniforms.

In 2016, a member of the Chinook tribe named Charlie Funk drew a new Chinook logo, one that better reflected the culture of the Chinook people, including a red cedar hat and a canoe paddle. At that point requests to change the logo had already dated back decades.

“What we’re hoping to do is make this a joint effort between the Indian Nation and the school district,” then-Kalama Principal Guy Strout told The Daily News in 2016. “It’s very important to us to have it designed and approved by the Chinook Indians.”

But after going public with the impending change, the school district quietly scrapped the idea, and today the altered image lives only on the internet.

Some Kalama insiders blame the lack of follow through on consistent turnover in the Kalama administration, particularly at the athletic director position.

Over the last several decades Kalama has seen one athletic director after another leave after only a couple years and then another new person comes in and the process resets. But new bosses can’t make sweeping changes immediately, so the issue inevitably gets shelved.

That historic inertia doesn’t mean that the story is over.

Kalama’s school board has committed to discussing the issue of Native American mascots on Monday. That first step is similar to how Columbia River approached renewed complaints about its mascot this summer.

For his part, Iyall is encouraged by the direction the conversation has taken in recent years, months and weeks.

“I think it’s encouraging for everybody,” Iyall said. “NASCAR’s done away with the Confederate flag. Washington is no longer the Redskins. There’s a lot of change right now.”

Marissa Heffernan contributed to this report.

CASTLE ROCK — The Rocket cheerleaders were probably happy Castle Rock tradition doesn’t require them to do push-ups after every touchdown. Tha…

Highway 30 Hootenanny: Columbians win big in the trenches, big on the scoreboard

RAINIER — Apparently in 2021, the Diesel comes in mini, too.

WOODLAND — When J.J. Fuerst took the opening kickoff and returned it 80 yards for a touchdown Friday night it served as a sort of warning for …

CASTLE ROCK — At first glance, a casual observer would have had a hard time telling the difference between opponents Tuesday night on Lebaron …

Hilanders beat Storm in five on Senior Night to remember

Kelso beat Skyview in five sets in a match that saw momentum shift back and forth all night long.

Toldeo second baseman Kolt Korpi dives to knock down a ground ball against Pe Ell/Willapa Valley in a 2015 game.

Longtime Toledo athletics volunteer Gary Ike poses for a photo wearing his "Chief Wahoo" Indians hat during football practice in this photo from 2010. Ike died in 2011.