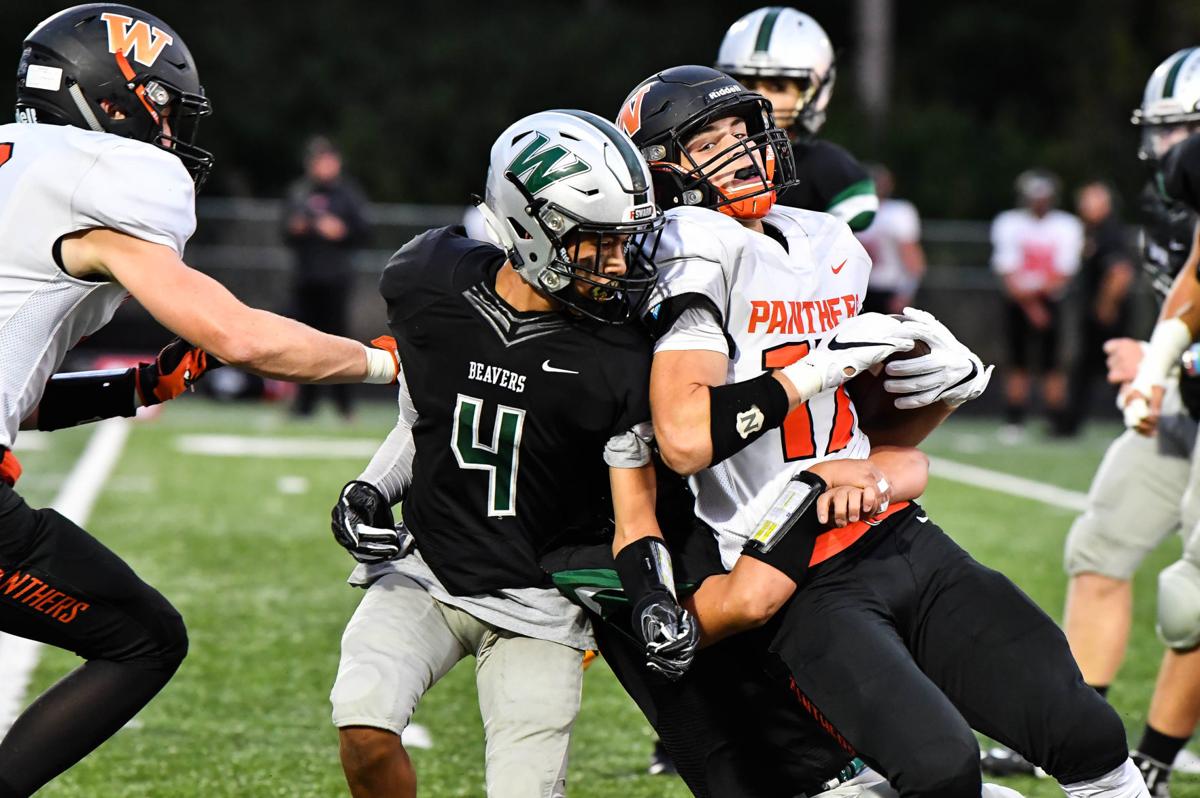 Woodland's Cisco Yager, 4, blocks Washougal's Brevan Bea, 17, while another Beaver takes Bea down from behind. 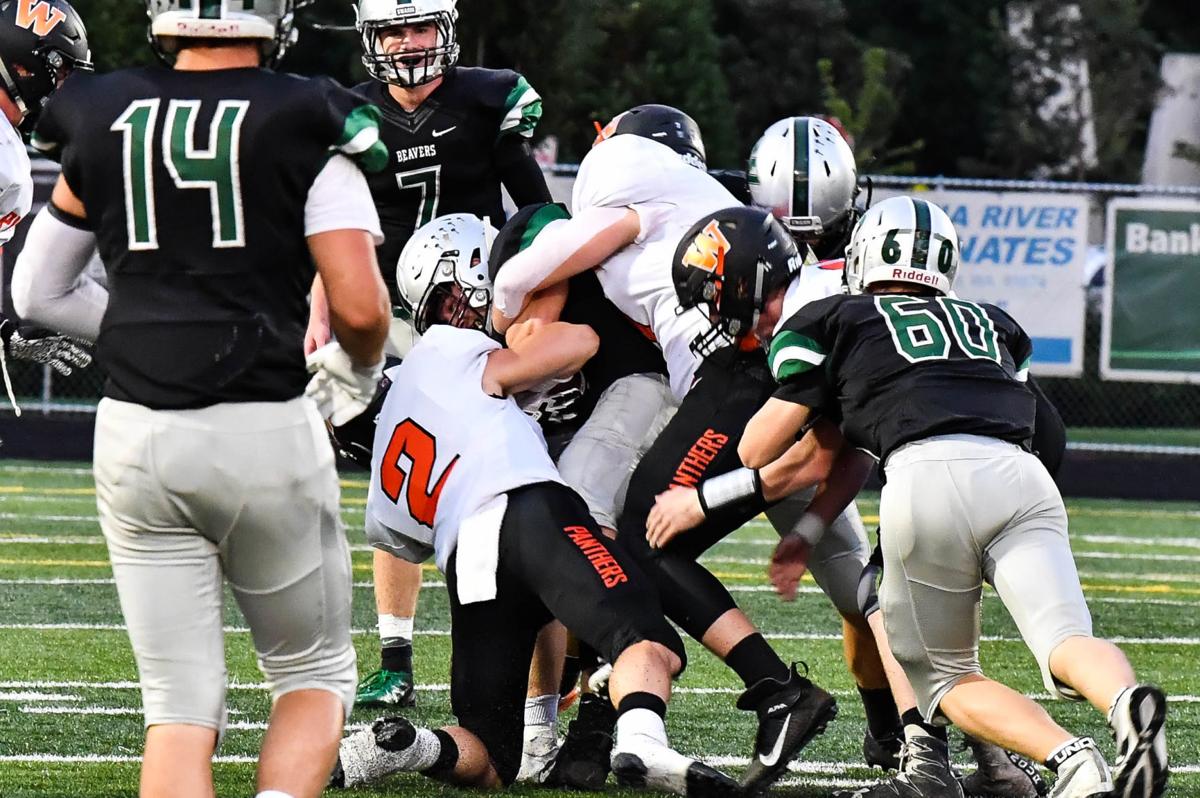 A pack of Panthers take down a lone Beaver. Woodland's Cody Matthews, 60, and Erik Christman, 14, try to help out, but come in a little too late. 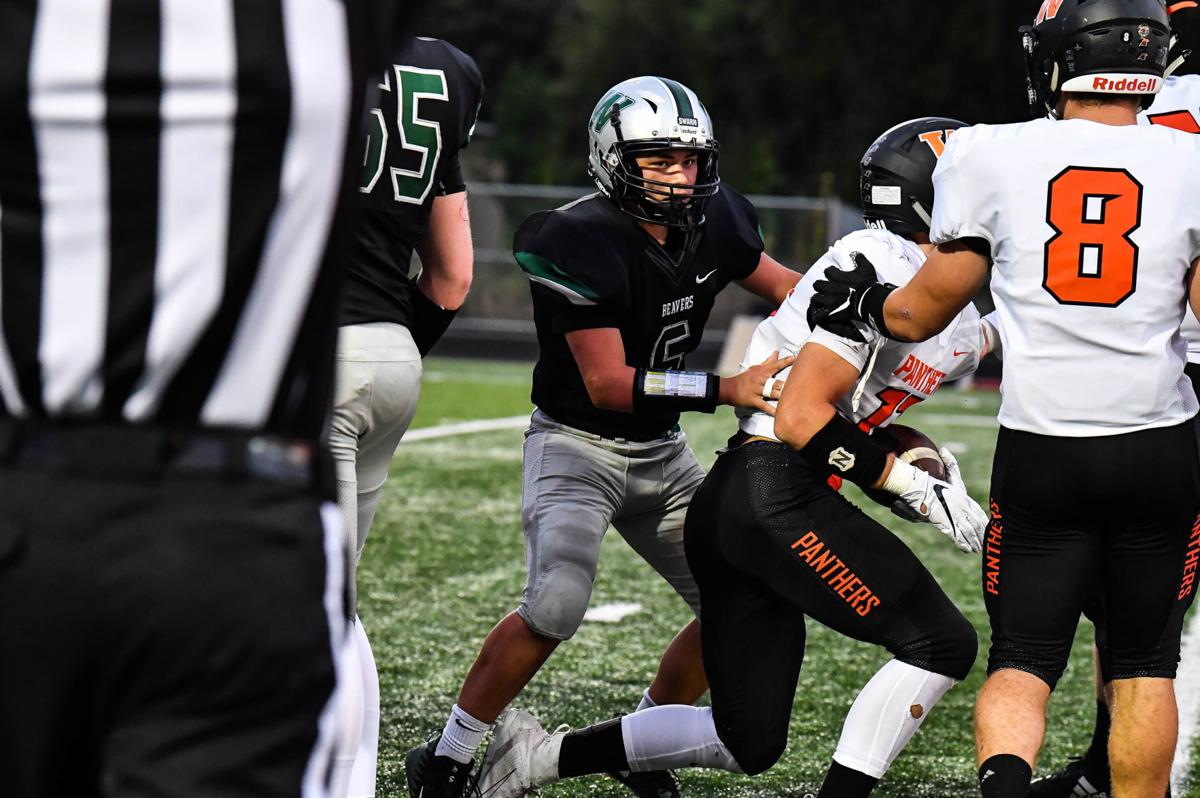 Woodland's Julien Jones, 6, tries to hold on to Washougal as they make a break for it during the second quarter.

The Woodland Beavers crumbled to the Washougal Panthers 21-47 on their home turf Friday night.

While Washougal (2-1) put up points quickly in the first quarter, Woodland (0-3) didn’t let up on their attack. With an interception from Brooks Massey in the first 10 minutes and a huge sack from Mark Morales shortly after, the Beavers put on a fierce fight.

“We’ve got a lot of work to do. It’s very humbling. That’s kind of where I am at with it,” Woodland coach Garrett Lutgen said.

Even though they may have been the smallest guys on the field, Cisco Yager and JJ Fuerst had the some of the biggest impacts.

Fuerst consistently caught passes from Isaiah Flanagan that ended in first downs and long runs. He could usually be found dodging around and slithering out of a forest of Panther players.

Yager made big moves when he picked up a Washougal fumble and recovered it for a Woodland touchdown. And all of this was just in the first half.

“These two guys are really trying to help carry us. I was proud of both of them. They both did really good jobs,” Lutgen said.

Woodland’s Matt Yager grabbed an interception in the first five minutes of the second half, giving the Beavers hope. Then Fuerst blasted through a huge Panther hole and made a run for it before being taken out at the 50 yard line.

“It was a tough game. I think we played our hearts out. I know personally I was in every play, I saw everyone working hard, doing the best they could,” Fuerst said.

Fuerst also helped Morales take down a Panther in the end zone, resulting in a 2 point safety.

Cisco Yager grabbed another pass from Flanagan and ran it in for the Beavers last touchdown of the game.

“I didn’t come out and perform to the ability that I would have liked to perform. I think we all just need to get stronger and find something inside of us that makes us go at it nonstop, 100%,” Cisco Yager said.

While the Panthers made big plays, such as Judson Mansfield running 60 yards for a touchdown, the Beavers kept their heads high.

One of their goals this week was to score more than one time, according to Fuerst. They did that in the first half.

However, Cisco Yager said the loss had a lot to do with the team’s mentality.

“A lot of us saw how big these guys were and just kind of stood back and let them just come and hit us. I feel like we need to work on our manliness,” Cisco Yager said.

Both Lutgen and Fuerst said they know the team has potential; it’s about getting to the point where the potential comes out on the field.

“All I really want is for teams to feel us and if we can get into our circuit work we’ll regain that edge that we need,” Lutgen said. “We’ve seen flashes of it, but flashes aren’t good enough for me. I want a complete game and this team has yet to play a complete game in my eyes.”

Woodland's Cisco Yager, 4, blocks Washougal's Brevan Bea, 17, while another Beaver takes Bea down from behind.

A pack of Panthers take down a lone Beaver. Woodland's Cody Matthews, 60, and Erik Christman, 14, try to help out, but come in a little too late.

Woodland's Julien Jones, 6, tries to hold on to Washougal as they make a break for it during the second quarter.