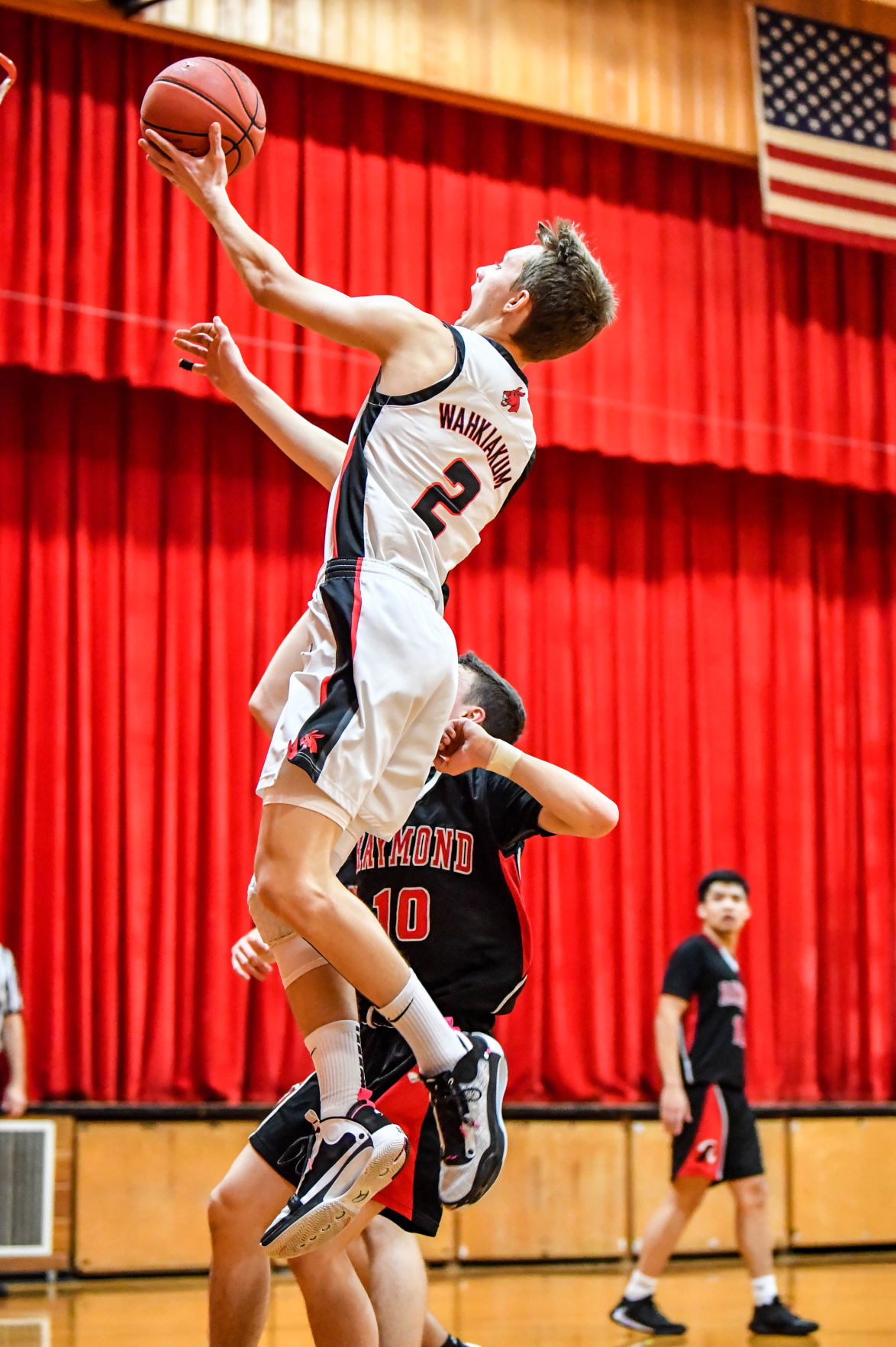 Logan LaBerge (2) goes in for a layup as McCartney Maden tries to block. 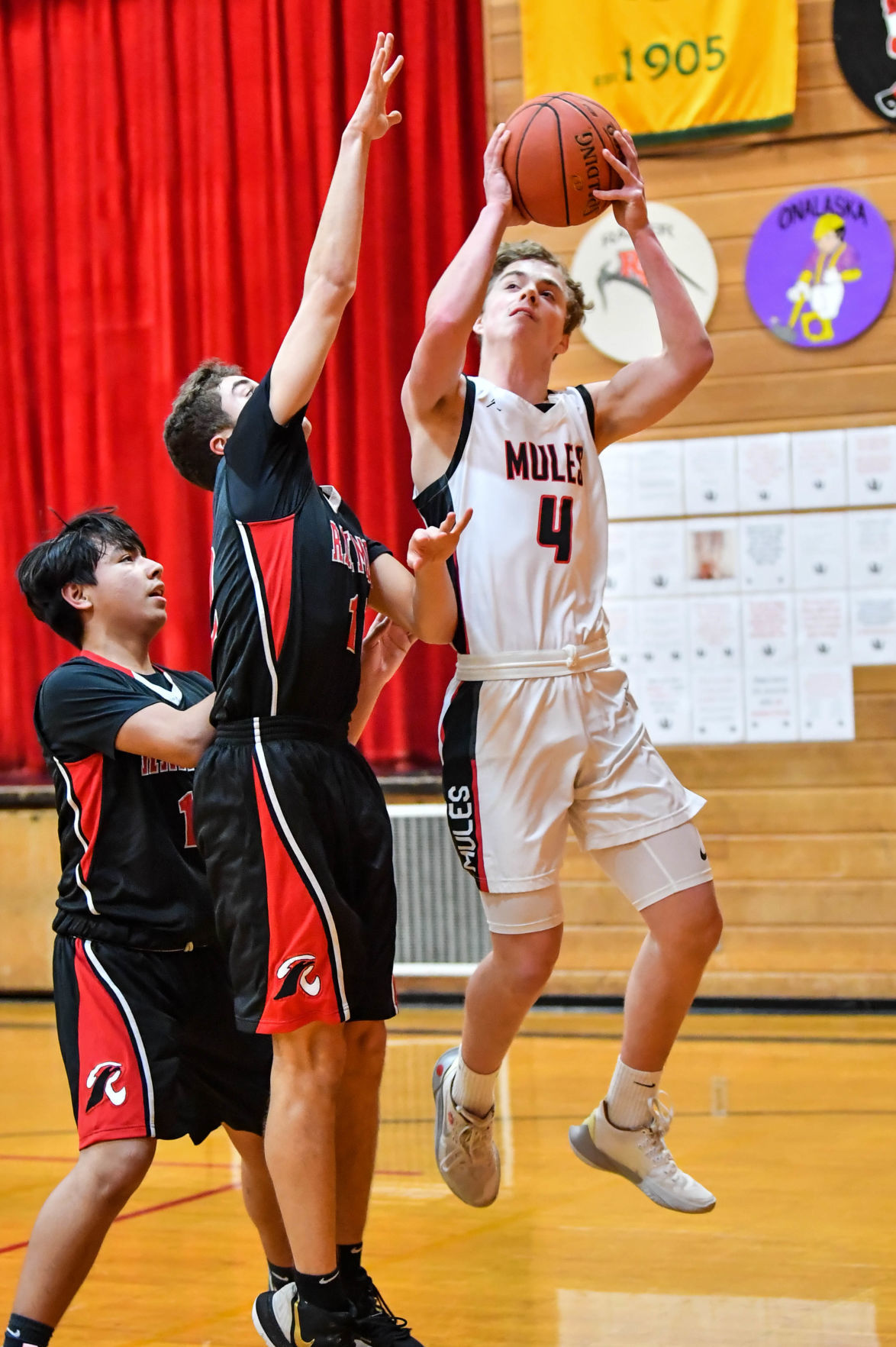 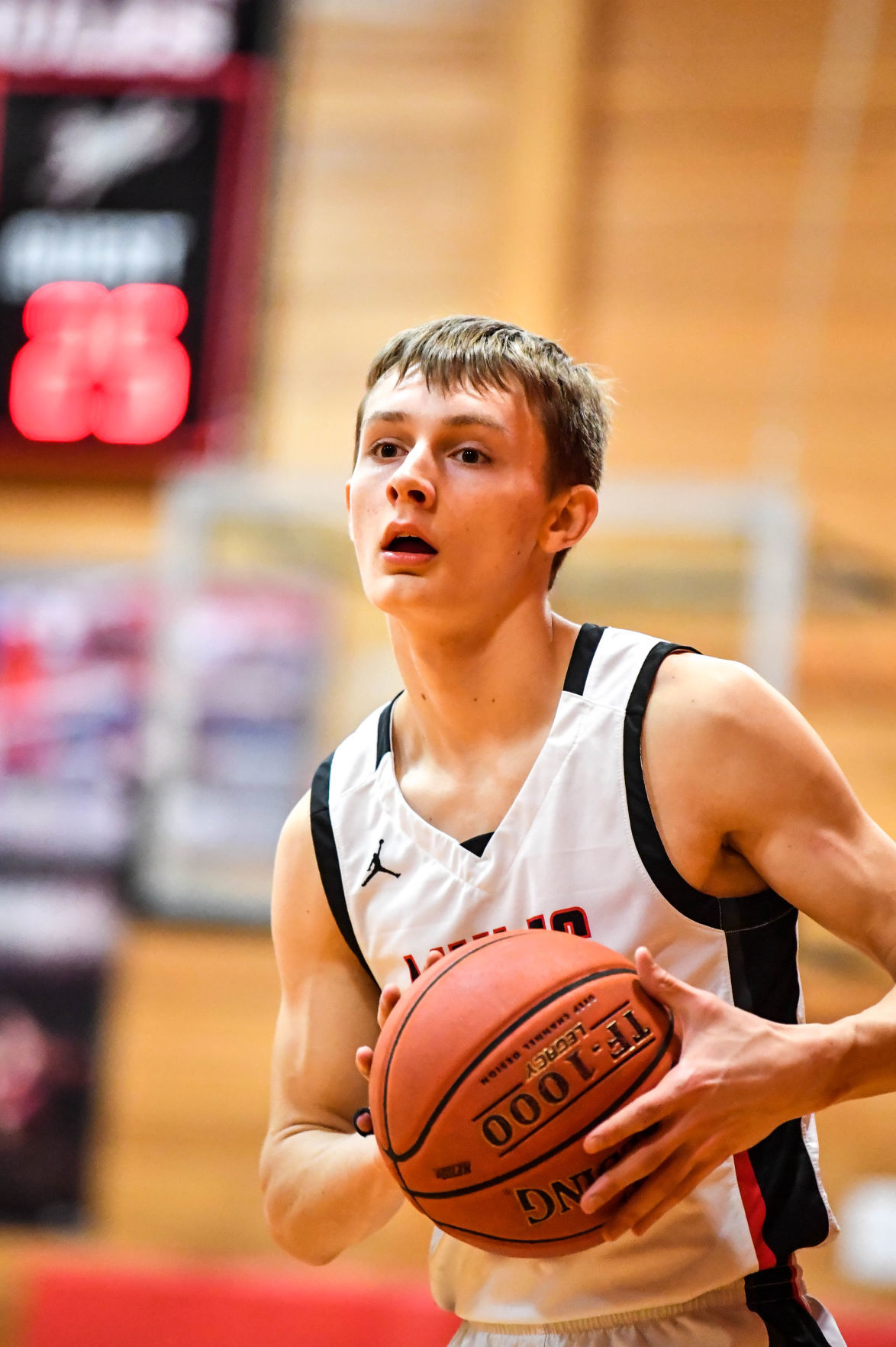 Logan LaBerge looks to pass during the Mules game against Raymond. 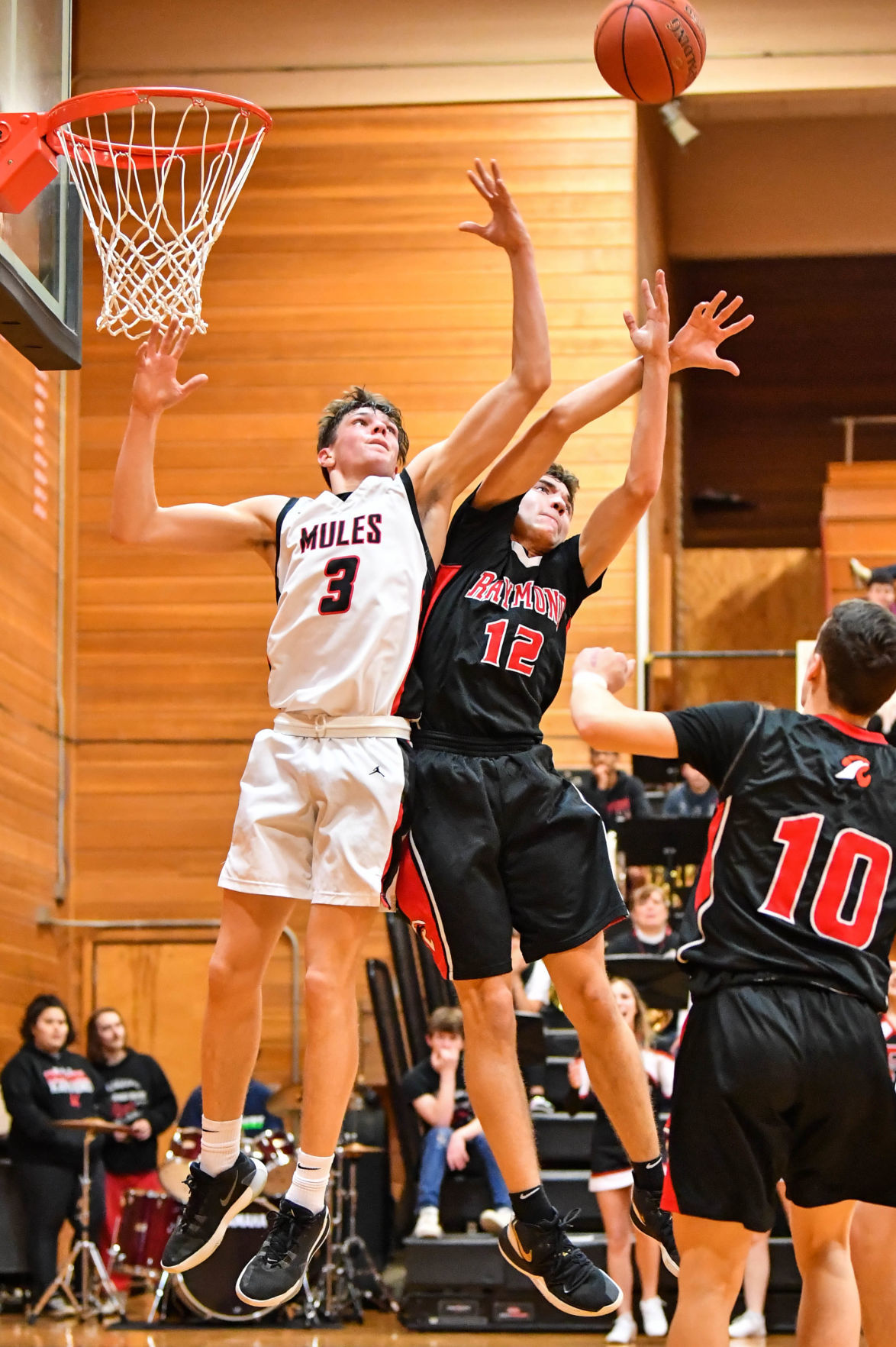 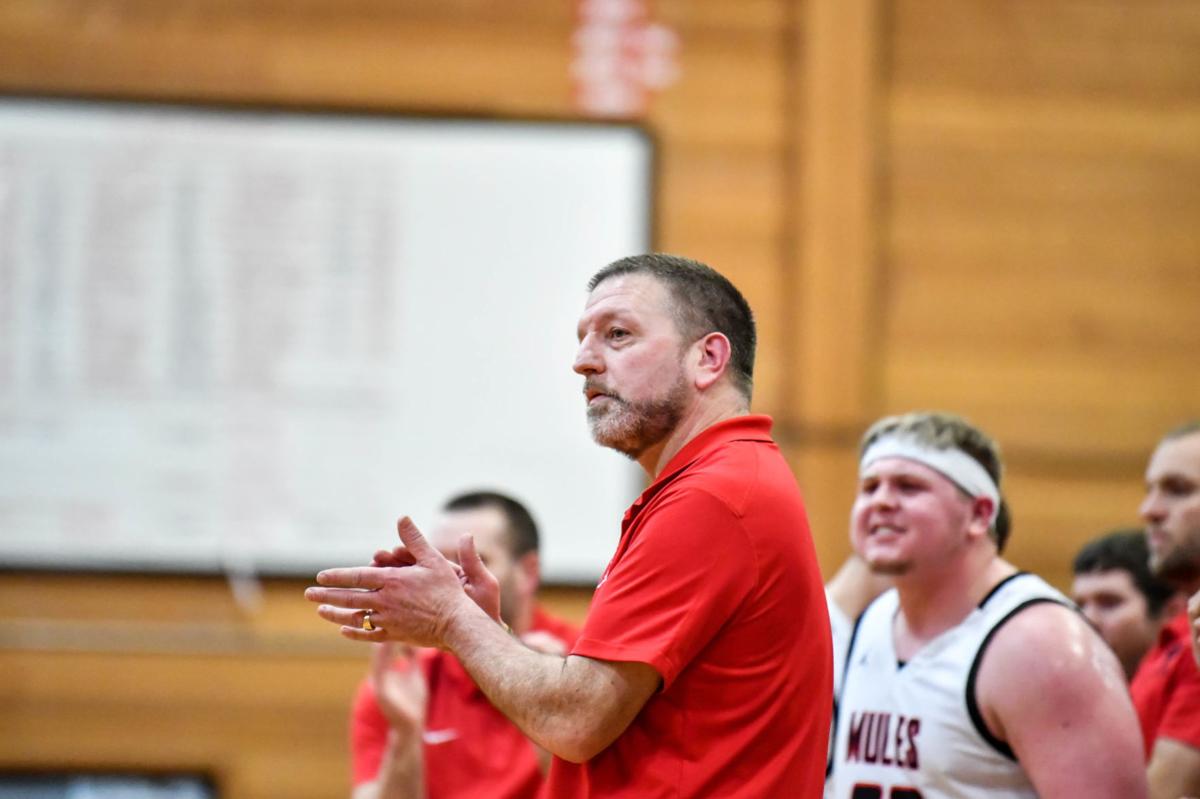 Coach Todd Souvenir cheers as the boys block a 3-pointer. 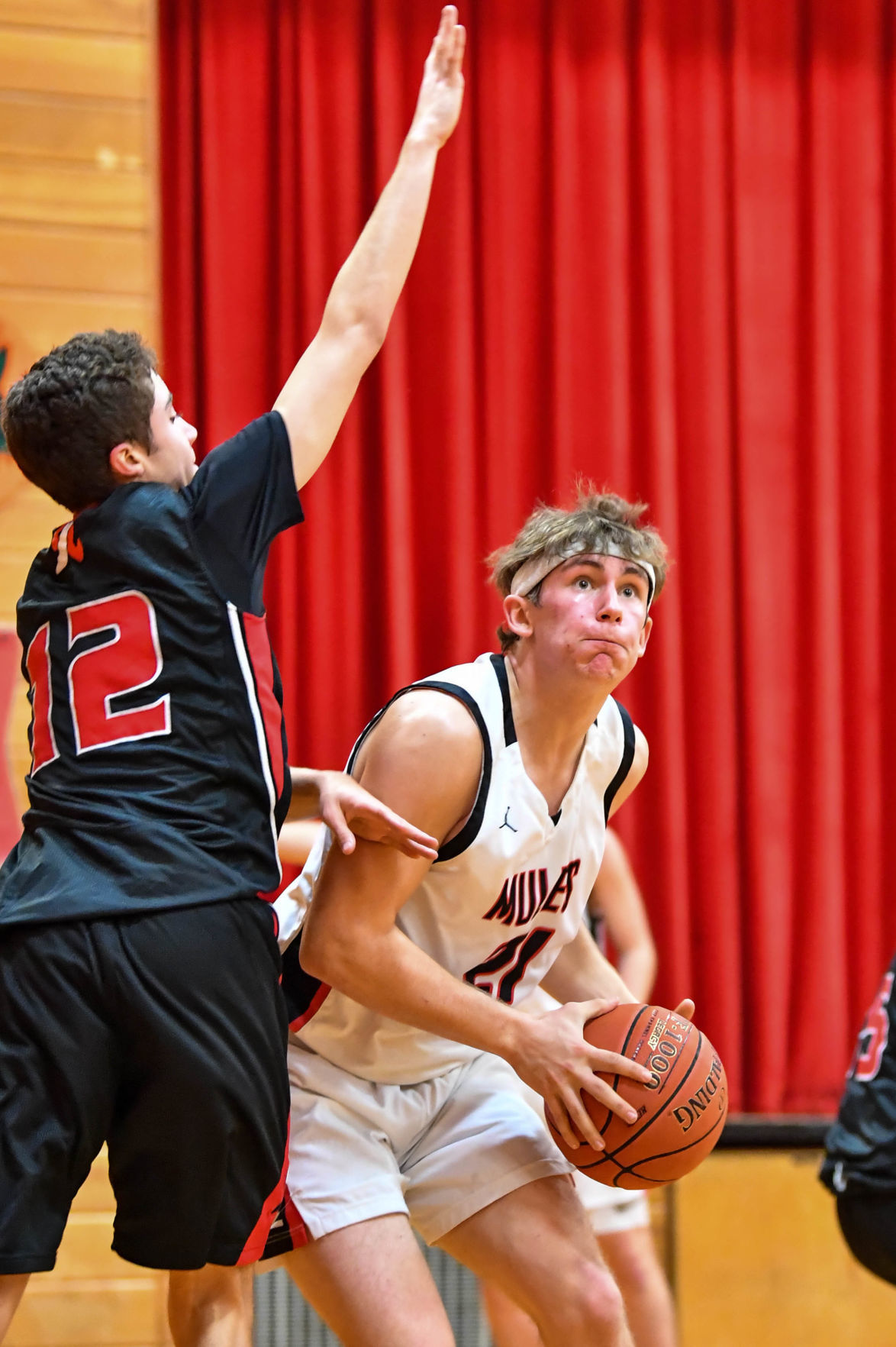 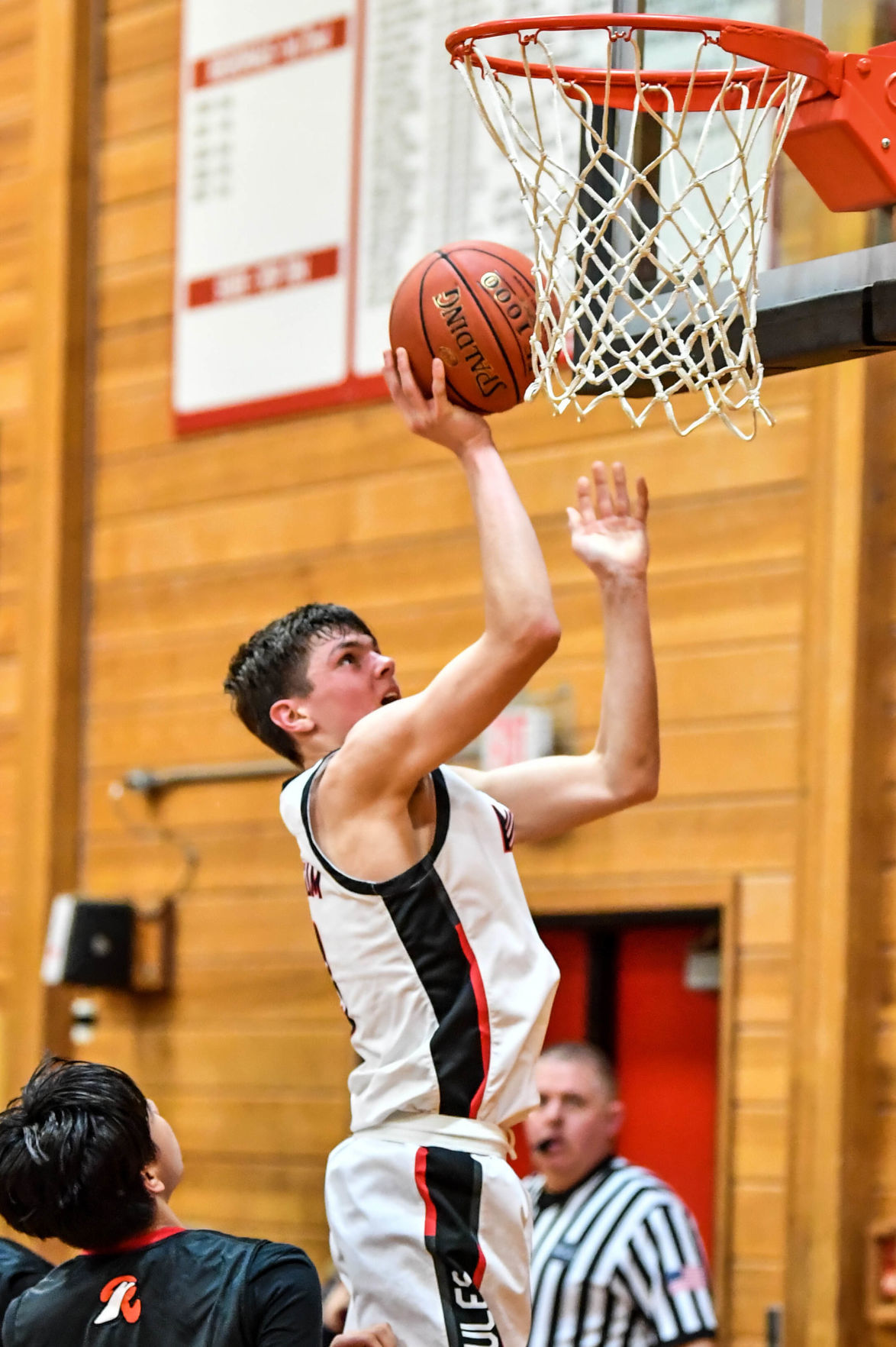 Jake Leitz goes in for a layup. 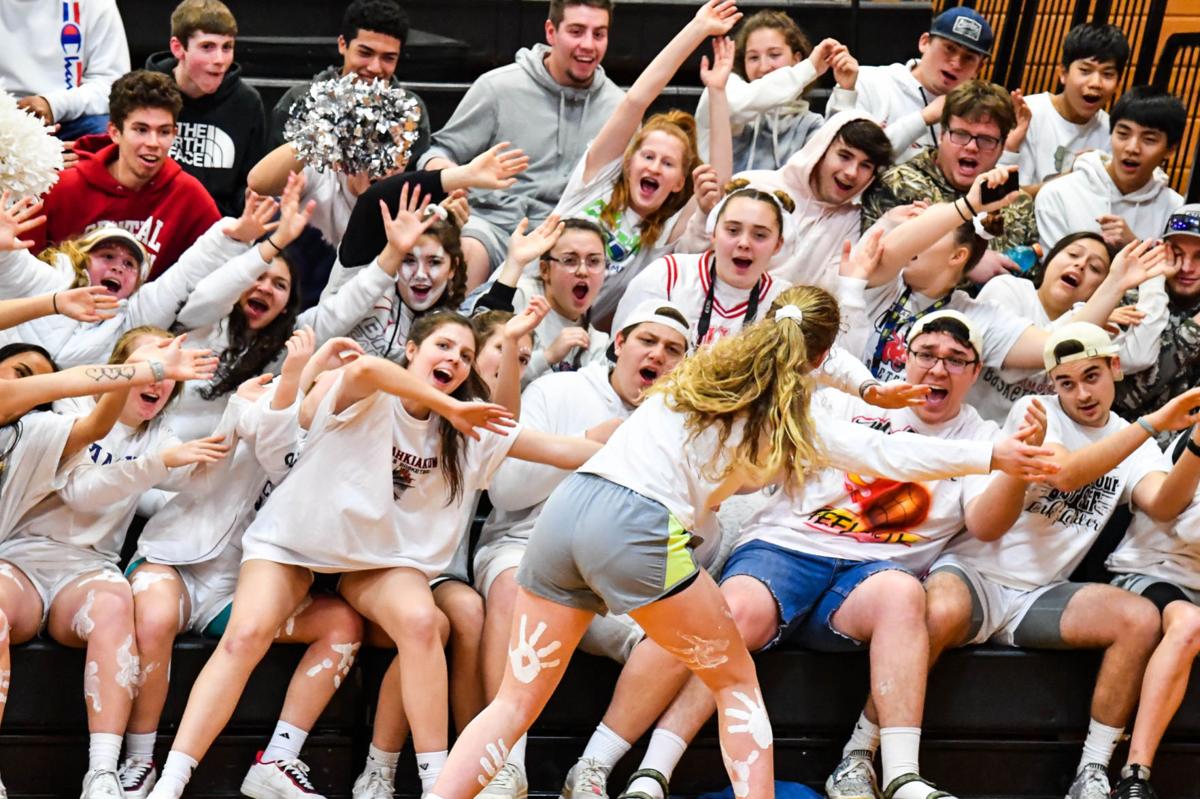 The Wahkiakum student sections, along with a few travelers from Winlock, perform the roller coaster cheer during a timeout. 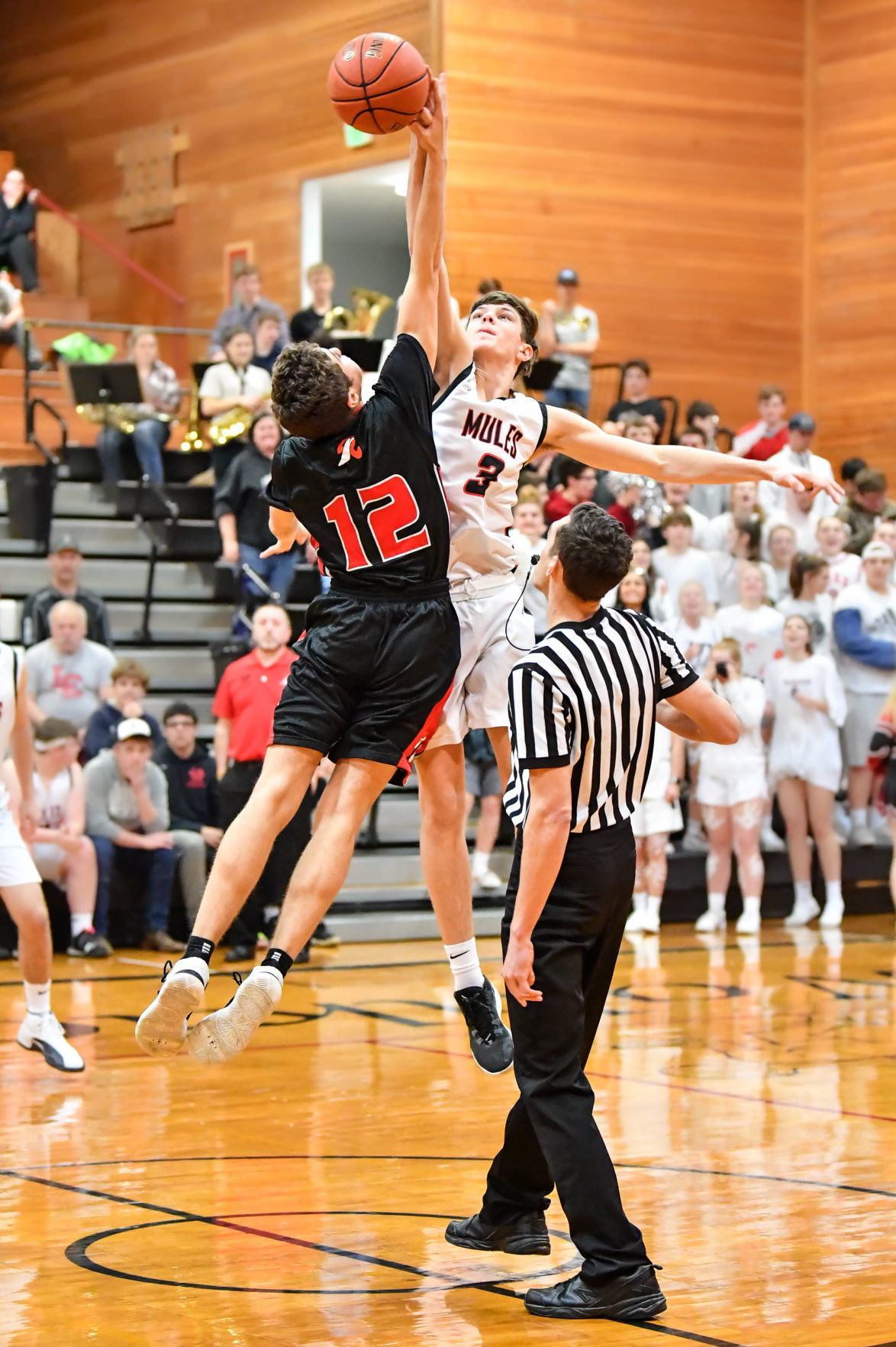 Wahkiakum's Jake Leitz and Raymond's Tre Seydel tip off the stat of their game. 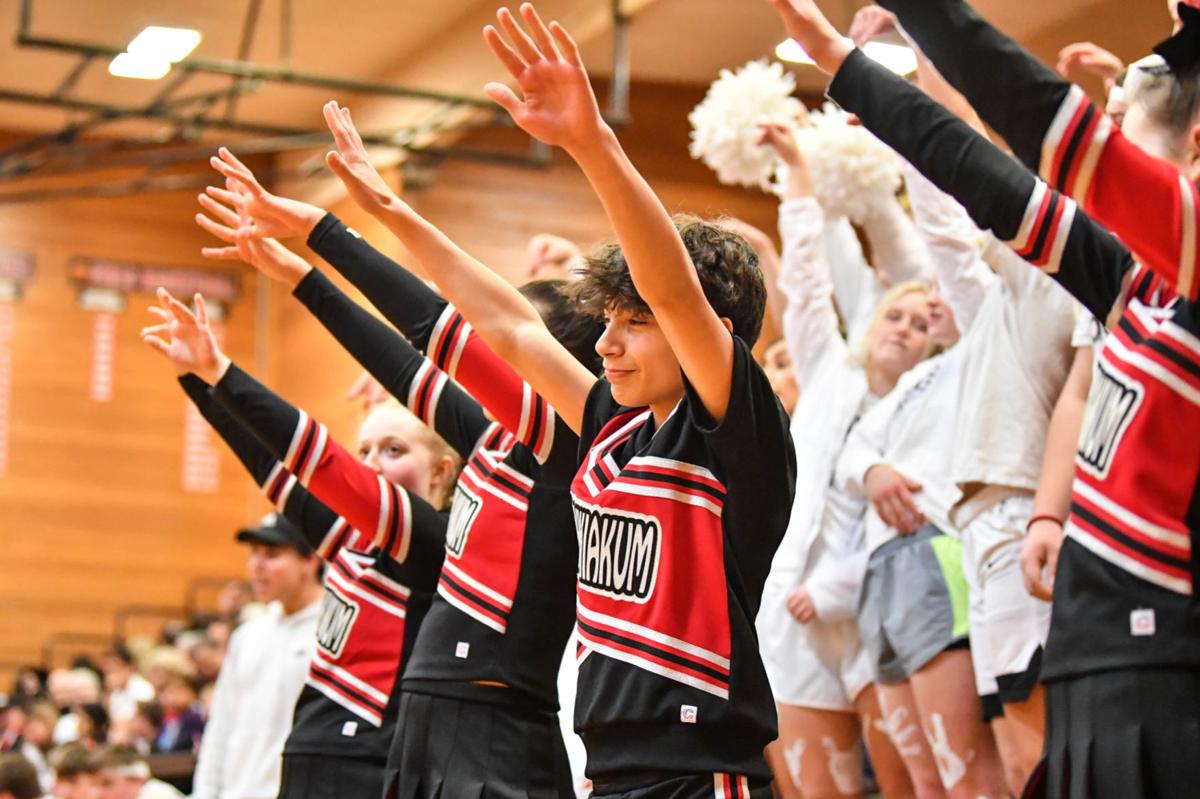 Kaleb Nielsen and the rest of the Mules cheer team cheer on the Mules as they make a free throw. 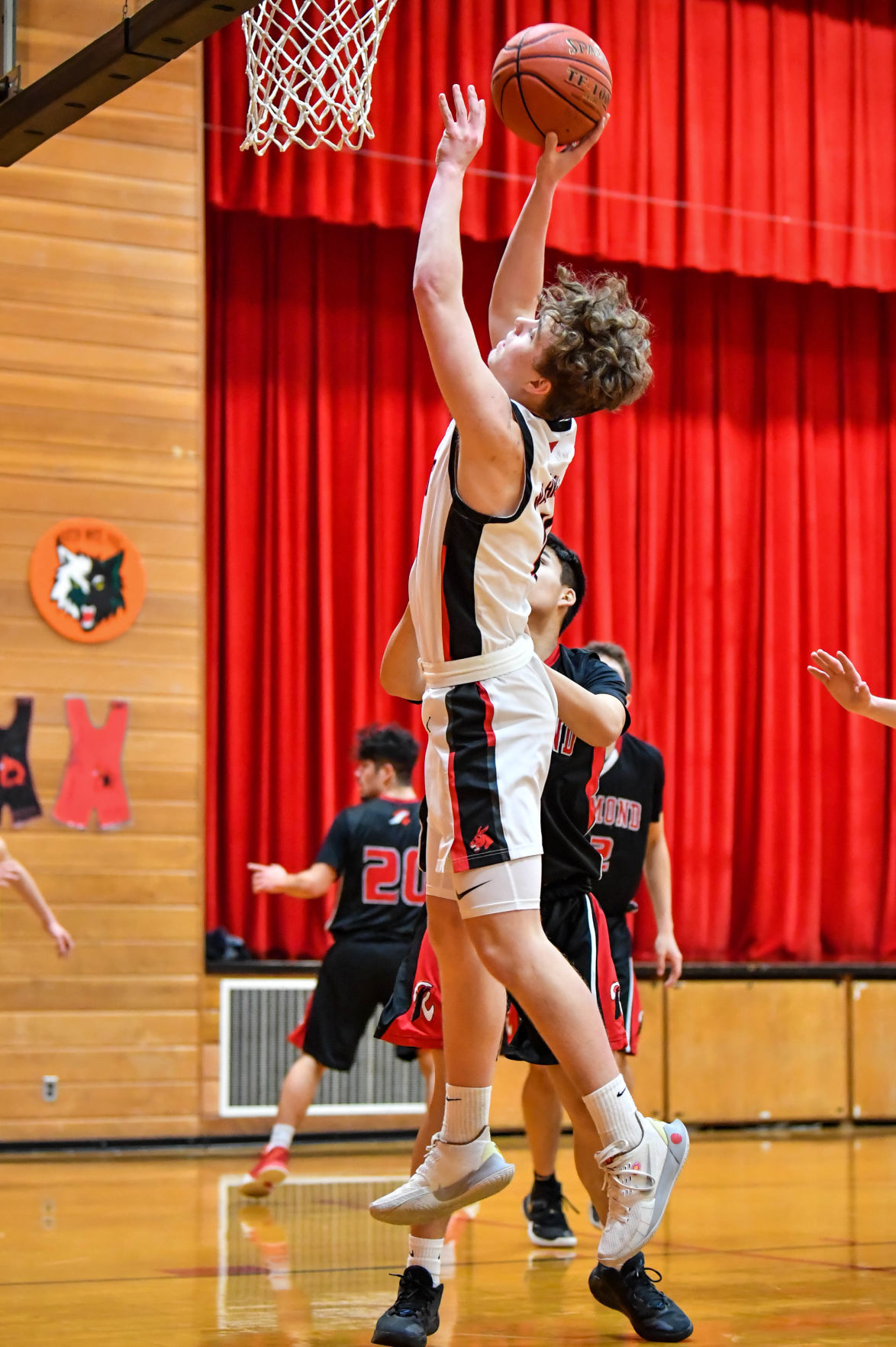 Brody Carlson goes in for a 2-pointer. 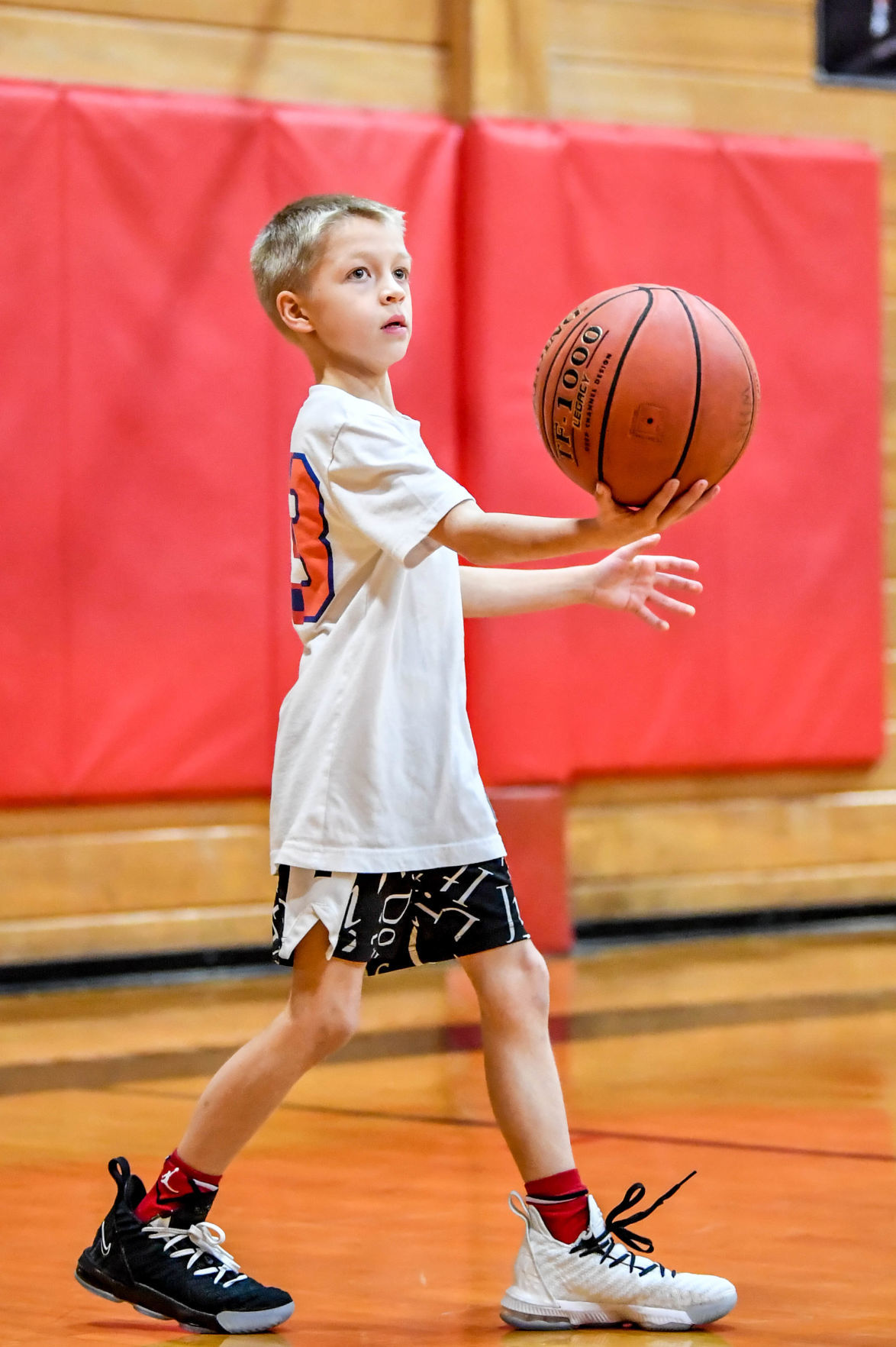 The Wahkiakum boys basketball team opened their district bracket Tuesday night with a packed house of both school bands and even supporters from Winlock as the Mules hosted Raymond and took them down 70-62.

The Seagulls were the first on the board, but that was the only time the Mules let them take the lead. With Jake Leitz adding 10 points and Beau Rose sinking a 3-pointer all in the first quarter alone, the Mules were prepared to shoot the lights out.

Wahkiakum had a wide safety net with only a few minutes left in the first quarter, leading 21-8. The Seagulls were not going to easily give up. They came back and added nine before the buzzer, ending the quarter at 21-17.

The pace was set for the rest of the match as the second period started. For every point the Mules made, the Seagulls replied with the same. For a stretch of time, the boys ran back and forth so often, there rarely was time for any defense, just catch, pass, shoot, score.

“There was a lot of running tonight,” junior shooting guard Brody Carlson said.

“The game plan was just to box out. What was going through my head was don’t let them get a bucket, but they made some good ones.”

Wahkiakum finally broke free of the point-for-point battle and took off with a five-point lead. With under 10 seconds left in the half, the Mules were comfortably up 37-32. But a foul allowed for the Seagulls to sink two free throws and end the period 37-34.

“That was a tough, intense game. But it’s a good game for us going into districts,” coach Todd Souvenir said.

“We knew they had one really good player, so the plan was to have Brody Carlson stay man-to-man on him. We didn’t anticipate that some of their kids would really get hot like they did. It made the game interesting.”

The third quarter started a battle riddled with fouls. It seemed as if every other possession ended with someone on the line. But Wahkiakum didn’t let that stop them. They kept their pace steady and the ball moving to keep a healthy lead over Raymond.

“We brought our defense here tonight. Even though they scored like 62 points,”Carlson said.

“We didn’t shoot that well, but we executed well and I’m proud of that. We came out with the ‘W’ so that’s all I can ask for,” Carlson said.

In total, Carlson added 14 points for the Mules. Beau Rose and Logan LaBerge both made five. Jake Leitz led the team with a game high of 30 points. Brodie Avalon helped with eight, KC Beery made six and Ashden Niemeyer had two.

For most of the fourth period, the Mules had a win in sight. But the Seagulls had one last burst in the last 40 seconds. They closed the gap to 62-58, making a comeback look possible. Wahkiakum turned up the heat and with the help of a few free throws, ended the game 70-62.

“We kept the lead even though we had some tough moments for sure,” coach Souvenir said. “Hopefully we can go surprise some teams at districts and make a little run. Getting some momentum and playing in this atmosphere is pretty good for this team. Overall we’re a really young team so having this night, this experience, moving forward is big for us.”

Wahkiakum girls moves on to districts

Wahkiakum pulled through Tuesday night’s game against Ilwaco to secure its spot in the district title game against Mossyrock on Saturday. Afte…

For the better part three quarters, the Ocosta Wildcats seemed to be cruising toward a spot in the 2B District 4 Tournament, holding a comfort…

High school sports teams are often referred to as one big family. But high school basketball really is a family affair for Clatskanie coach Jo…

CLATSKANIE — The Clatskanie boys battled the entire night and forced overtime on 3-pointer at the buzzer, but they ultimately fell to Warrento…

It had been at least 10 years since the R.A. Long girls basketball team qualified for the district tournament.

CLATSKANIE — The Lady Tigers returned to first place in the Coastal Range League with a blowout 57-22 basketball victory at Warrenton Tuesday night.

Logan LaBerge (2) goes in for a layup as McCartney Maden tries to block.

Logan LaBerge looks to pass during the Mules game against Raymond.

Coach Todd Souvenir cheers as the boys block a 3-pointer.

Jake Leitz goes in for a layup.

The Wahkiakum student sections, along with a few travelers from Winlock, perform the roller coaster cheer during a timeout.

Wahkiakum's Jake Leitz and Raymond's Tre Seydel tip off the stat of their game.

Kaleb Nielsen and the rest of the Mules cheer team cheer on the Mules as they make a free throw.

Brody Carlson goes in for a 2-pointer.