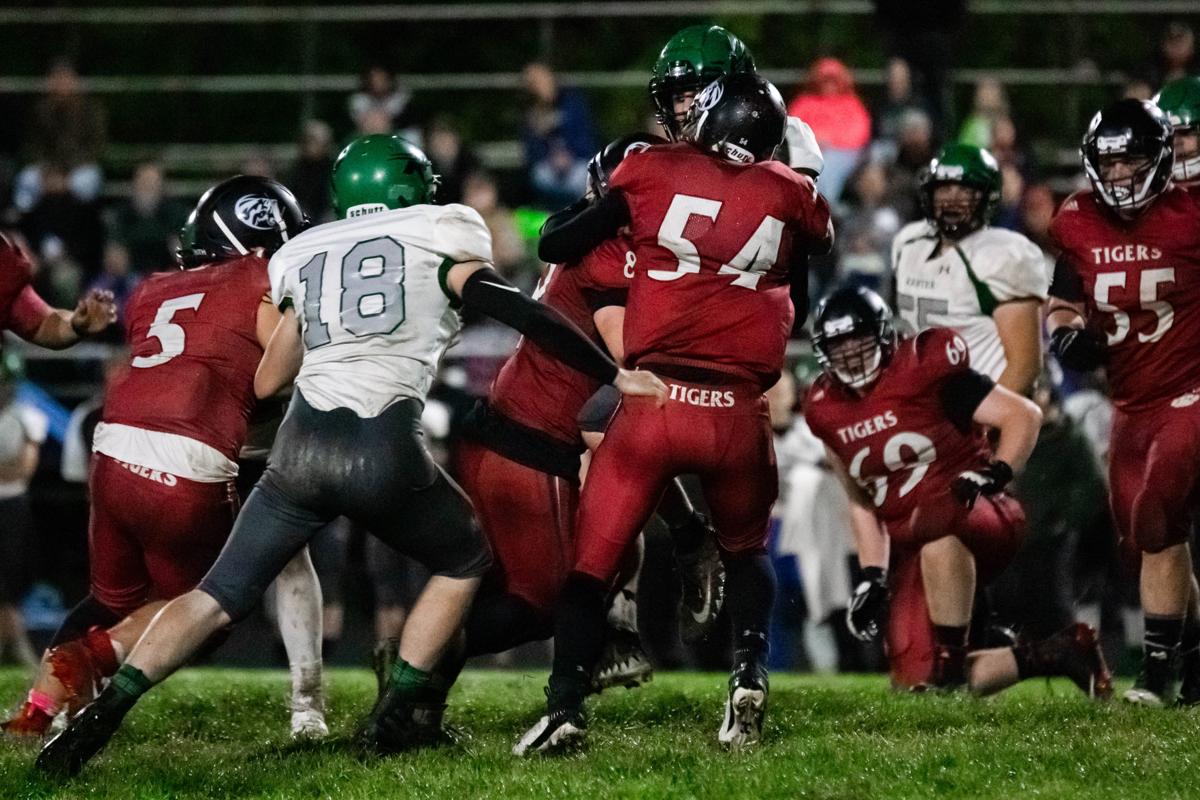 Clatskanie's Timber Zea and James Helmen take down a Columbian while Rainier's Dominic Cameron tries to hold them back. 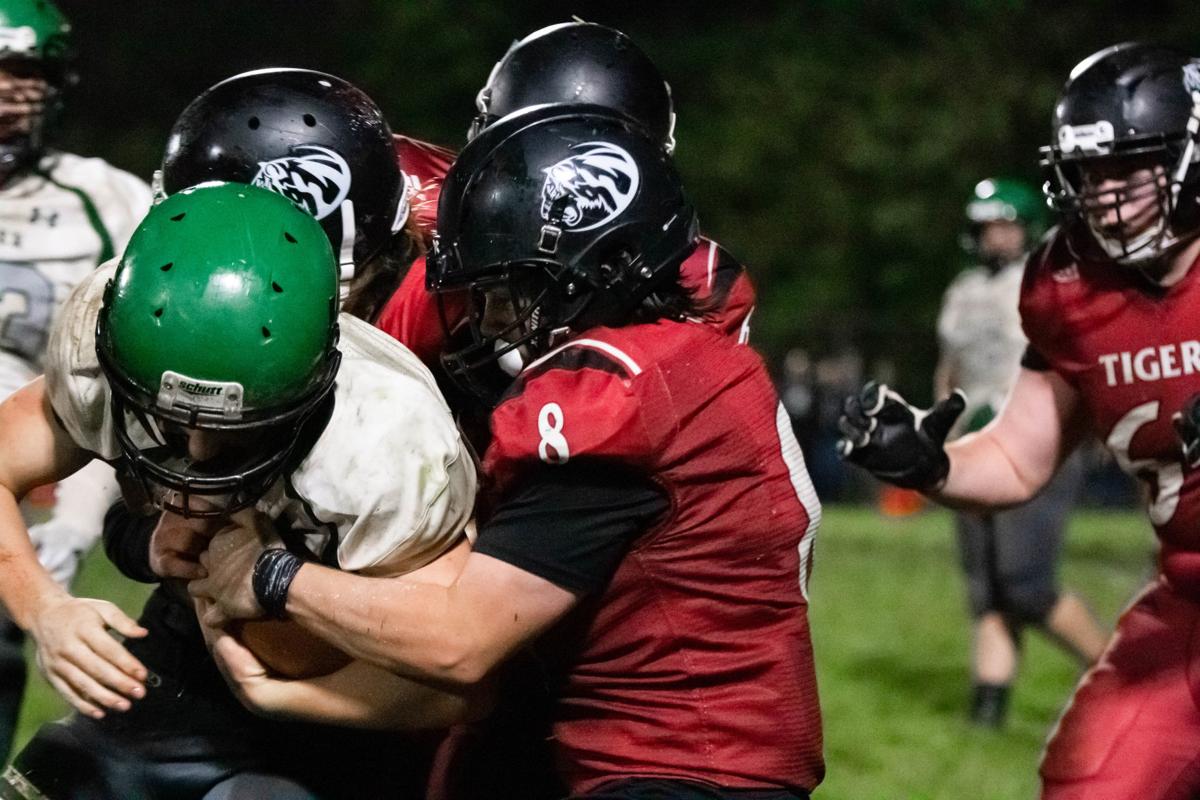 Clatskanie's Sam Shockley takes down a Rainier Columbian during the Highway 30 hootenanny Friday.

Cedrix Moses was sick and banged up his wrist.

But Rainier was on the other sideline and he wasn’t going to miss this. He rushed for 132 yards on 24 carries, scored both of Clatskanie’s touchdowns as the Tigers snapped No. 1 Rainier’s 17-game winning streak with a 13-8 slugfest at Dick Manick Field on Friday night.

“We’re ecstatic,” Clatskanie quarterback James Helmen said. “We’ve been looking at this game since last year. Last year I wasn’t able to play them both times, I tore my ACL. So it’s been a grind ever since then, looking forward to this game.”

Of the 39 plays Clatskanie ran on Friday night, 24 went to Moses. He carried piles. He sprinted for chunk gains. His first touchdown of the night went for 46 yards in the second quarter, providing the only real offensive highlight of the initial 24 minutes.

His 3-yard plunge with a minute left in the fourth quarter gave Clatskanie the lead, and his 132 yards gave them the win.

“He’s crazy,” Helmen said. “His athleticism, too. Everything he does is spectacular.”

“The offensive line gave him opportunities,” Tigers coach Tim Warrens said, “and he made the most of ‘em.”

But perhaps the story of the night came from the Clatskanie defense.

A week after getting throttled by an overpowering La Grande offense, the Tigers defense played with their hair on fire in the Hootenanny.

Kenney Tripp, Rainier’s outstanding sophomore quarterback, rushed for minus-27 yards on 12 carries. David Katon, returning from a high ankle sprain suffered in the season’s first quarter of play, rushed for 20 yards on 10 carries. Stone Ware had 34 yards on seven carries and had minus-12 at the break.

Tripp was just 4-of-10 passing for 35 yards. Clatskanie’s front bottled up everything and its secondary let nothing behind them.

It was as perfect a defensive performance as could be.

“We’ve been talking all year about playing physical and finally that transpired,” Warren said.

But it almost went for naught.

Moses ran in his long touchdown run with just unjder six minutes remaining in the second quarter, getting the corner and never looking back.

Clatskanie nearly doubled the lead on the first play of the next drive when Sam Shockley found a hole and also got the corner and sprinted away from everyone.

But Clatskanie got flagged for illegal shift as a Tiger came forward in motion and didn’t set. The 50-yarder was negated and Clatskanie later punted.

Nothing changed for the duration of the third quarter, then Rainier got the ball after a Clatskanie punt with 28 seconds left and put on an eight-play drive, ended by a 34-yard Stone Ware run that went right up the middle.

Rainier always goes for two and gave it to Ware, who leaped at the goal line and extend the football across the plain, giving Rainier an 8-7 lead with 7:47 to go in the final period.

“It was really positive,” Stone Ware said of the feeling on the sideline. “But it fell off (shortly thereafter).”

But Moses — and the Tiger offensive line — weren’t done.

It was a 12-play scoring drive and Moses got the ball 11 times.

He ran for 11 yards on third and 4, crossing into Rainier territory.

He ran again on third and 2 from the 3, powering in the score that was the difference.

Rainier had that winning streak snapped but in no way is faced with catastrophe. The feeling is certainly unfamiliar, as the last time these seniors lost they were sophomores, though that game was a season-ended as it came in the playoffs.

This one hurts no less. It’s a rivalry game. They didn’t play particularly well.

But there’s no doubt in that locker room that the Columbians will bounce back next week.

They’ve known about their potential for the first four weeks of the season, but were yet to achieve that level.

Now, with the win over the hated Columbians, that potential is now not only reachable, but thought of consciously.

“We’ve always had the potential, we just haven’t been playing together well for the first four weeks,” Warren said. “We still have a lot of things to clean up.”

Rainier hosts Dayton next week and Clatskanie visits Taft. Both games are at 7 p.m.

Clatskanie's Timber Zea and James Helmen take down a Columbian while Rainier's Dominic Cameron tries to hold them back.

Clatskanie's Sam Shockley takes down a Rainier Columbian during the Highway 30 hootenanny Friday.