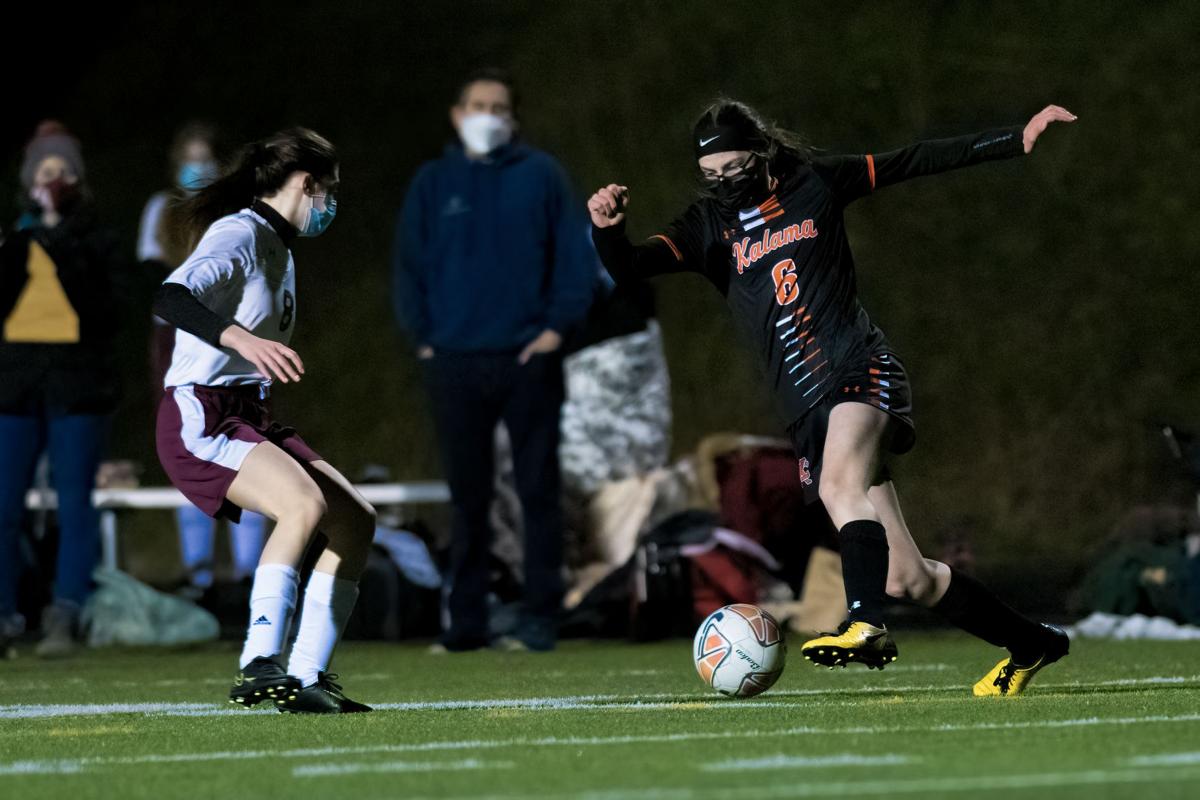 Kalama's Ruby Jackson makes a move with the ball against Stevenson on Wednesday, Feb. 17, in Kalama. The Chinooks won 7-0 in their season-opener. 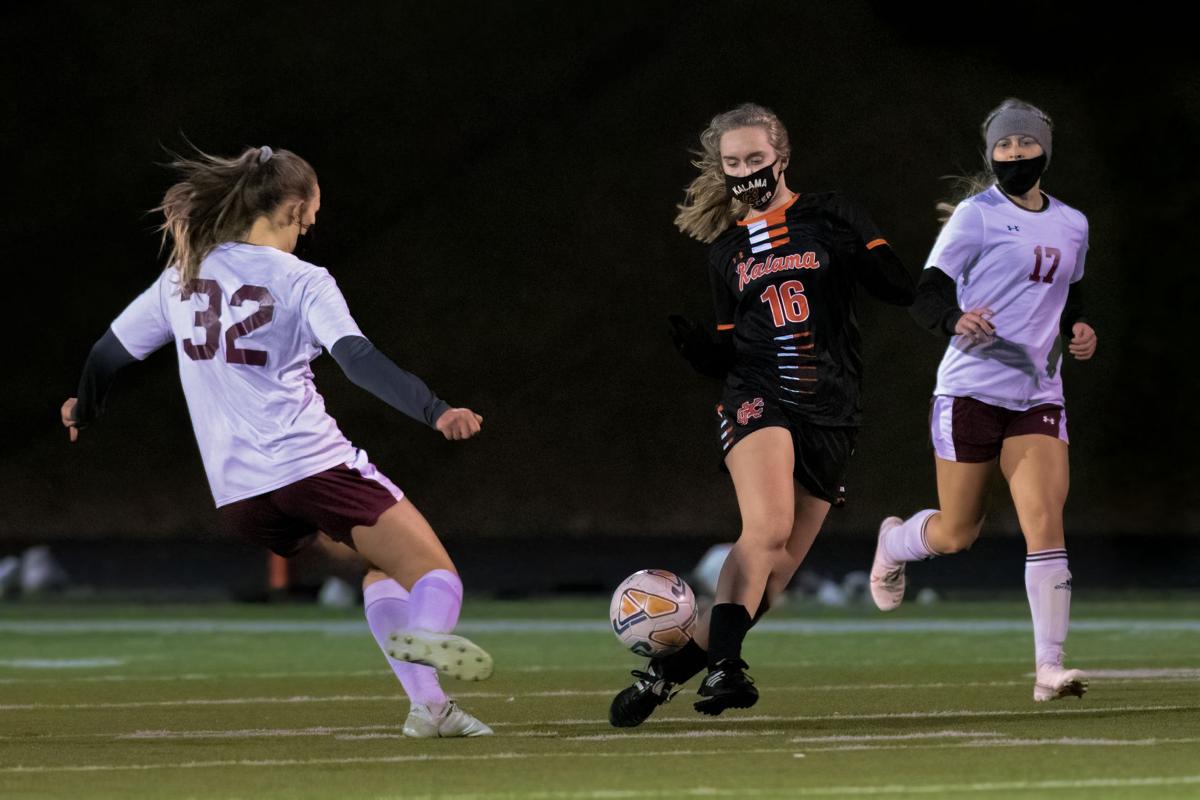 A Stevenson player attempts to make a pass as Kailey Shipley of Kalama plays defense on Wednesday, Feb. 17, in Kalama. The Chinooks won their season-opener 7-0 in front of a socially distanced smattering of fans. 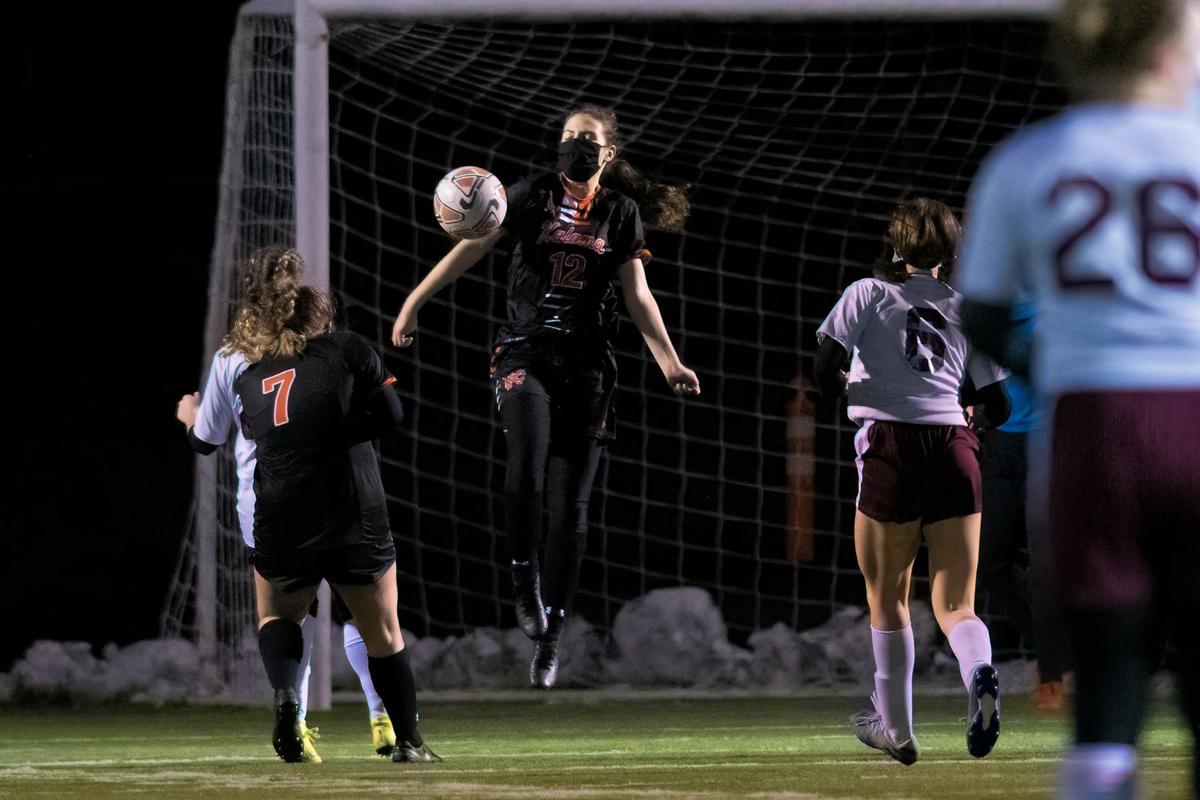 A Stevenson player puts up a shot as Kalama's Elyse DiCristina jumps to defend the Chinooks' goal on Wednesday, Feb. 17, in Kalama. The Chinooks won 7-0.

KALAMA — To hear coach John Bates say it, the Kalama soccer team has a lot of catching up to do, starting off its season after its West Region rivals in the Central 2B League had already gotten a couple games in.

But to look at the first box score of the season, the Chinooks are in a pretty good place, opening their winter 2021 campaign with a 7-0 drubbing of Stevenson.

“It was a good game,” Bates said. “I’m just glad the girls were out playing after this COVID stuff. They’re looking pretty good.”

Josie Brandenburg, who put the C2BL on notice last season as an eighth grader, commemorated the beginning of her freshman season with a four-goal outburst, also adding a pair of assists.

Melanie Martinez pitched in with two goals and an assist, and sophomore Sophie Given scored one.

As young as last year’s Kalama team was, this year’s Chinooks may be even younger, with just two seniors on the roster. But the youth — led by Brandenburg — showed up Wednesday evening in a big way.

The Chinooks brought two eighth graders into the fold this season, and both showed up on the statsheet in their first games. Bridgette Holifield tallied an assist, and Aubrey Doerty was on half of a goalkeeper tandem — along with freshman Jessica Meyer — that kept Stevenson off the board for 80 minutes.

TOLEDO — Onalaska flipped the script here on Wednesday, Feb. 17, with a 4-0 win over Toledo in a 2B girls soccer match.

The win for the Loggers comes just nine days after they lost the season-opening contest at Toledo by a score of 2-1. According to Toledo coach Noel Vasquez, there were several factors at play in his team’s reversal of fortune.

“We’ve been struggling with a few injuries, I’m not trying to make excuses, but we are,” Vasquez said. “More than anything they came in hard. They had a game plan for Marina (Smith), and they were just able to control the ball a little bit better (than last time).”

In order to disrupt Toledo’s offense the Loggers played a sort of “spy” defense on Smith, following her wherever she went and then sending a second defender to slow her down whenever Smith got too close to the net.

Still, Toledo once again managed to win the possession battle against the Loggers. It’s just that they struggled to find, and take, quality shots on goal. In the end, both teams got up a dozen shots on goal but the results were quite different.

For Onalaska, Cierra Russ, Callie Lawrence, Joscelin Escalera and Brooklyn Sandridge all found the back of the net. Two of those goals came in the first half, effectively putting Toledo on notice that things were going to be different this time around. The final score came in the final minutes off of a penalty kick.

With Smith neutralized on offense Toledo turned to another familiar face in an attempt to stirs things up against the loggers. Keyli Plancarte, a senior midfielder, was doing a fine job in her new role, too, until the injury bug got her.

“She was able to put pressure on the top and tried to get things going,” Vasquez added. “She was disrupting that defensive line for Ony and keeping them on their heels… Once we lost here it was kind of downhill from there.”

Near the end of the first half Toledo nearly punched in a score that would have made the game 2-1, and likely changed the tenor of the second half. However, Onalaska’s sticky mitted goalkeeper, Alex Cleveland-Barrera, had something to say about that.

“Their goalkeeper, Alex, had such an amazing save,” Vasquez said. “If that goes in, I think things could have been a lot different.

Toledo was supposed to play Kalama at the beginning of the week but that game was postponed due to snow on the field. No makeup date has been scheduled.

TOUTLE — It was about as far from “the beautiful game” as one can get but Winlock managed to eek out a win 3-2 win here Wednesday in what was likely the muddiest game of the season, thus far.

Less than 24-hours after the Fighting Ducks football team hosted Wahkiakum and churned much of the turf into liquid tundra, the Cardinals arrived in East Cowlitz County with winning on their mind. So, despite the quagmire of a field, Winlock went to work and worried about the laundry later.

“We got the W so that was fun… it was a mud fest,” Winlock coach Brian Ziese said. “In honest truth we probably shouldn’t have played a soccer game on it. It was that bad… Even where it looked green it was SO soft.”

Perhaps due to “home field advantage” Toutle Lake actually got the scoring started with a goal in the 10th minute. Five minutes later, though, the dirty birds from Egg Town tied it up when Angela Gil-Munoz found the back of the net off a cross pass from Gabby Cruz.

In the 22nd minute Maggie Maddox gave Winlock the lead when Alexa Barragan found her open in front of the net with a cross pass. Toutle Lake was’t going to slink away quietly, though, and notched a game-tying goal in the 37th minute that sent the teams to intermission all knotted at 2-2.

“Both teams figured it out and played the spots that weren’t that bad,” Ziese noted. “It looked like the girls didn’t go too-too hard on those 50/50 balls. Everyone was trying to avoid injuries.”

In the second half the conditions took over and turned the pace of play into a slog. As a result, the tie held until the 72nd minute when Alexa Barragan decided she didn’t want to stick around for a shootout. Instead, the junior forward put her team on her shoulders and delivered the game-winning goal.

“She was just trying to work so hard in the middle all by herself,” Ziese said. “This one time she just decided to take them on and made her way past a couple of people, found a shot, and then found the back of the net. That’s what we needed. Sometimes she’s got to be a little bit selfish.”

WOODLAND — Woodland’s season got started with a 4-0 defeat at the hands of Washougal, but it was a minor victory for the game to even be played at all.

Even three days after the last snow fell on the region, the field at Woodland was still unplayable well into Wednesday, according to Woodland coach Fred Jenkins.

“We actually weren’t sure we were going to have a game,” he said. “At the last minute, we had 20-30 parents come out there and do a clear-off. It’s been a struggle to just get out there to play.”

When the game was able to get underway, the Beavers’ defense held firm for most of the first half, with Washougal taking a 1-0 lead into halftime. After the break, the Panthers were able to break through more, notching three goals in the final 40 minutes.

In her first start between the sticks, freshman goalkeeper Collett MacDonald stopped eight of the 12 shots that came her way. Jenkins also tabbed sophomore Grace Hay as his player of the game.

“The girls have been doing really well and working really hard,” Jenkins said. “They show a lot of heart every time they go out there. We’ve got a pretty young team. It’s growing, but we know what league we’re in and we know how tough it is. We just keep moving forward.”

Woodland (0-1) will go to Fort Vancouver on Thursday for the second in a set of three matches in four days. Kickoff will be at 5 p.m.

Kelso coach Michelle Mury remembers exactly what happened the last time her team faced Camas, even if that matchup was well over a year ago. I…

Putting the 'K' in kickoff: Hilanders return to gridiron under home lights

It’s beginning to feel a little bit different over at Schroeder Field these days.

TOUTLE — There’s a moment in every play and every game where the result suddenly seems inevitable. The arc of the ball, the positioning of res…

BATTLE GROUND — Kelso put their first check mark in the win column on Wednesday with a rapid fire sweep of the Tigers in 3A/4A Greater St. Hel…

Soccer Roundup: Kelso bounces back with win at Battle Ground; Toledo, Kalama win in opposite ways

BATTLE GROUND — The Hilanders decided the best way to bounce back from a shutout loss was to pass the favor along, so that’s what they did wit…

Kalama's Ruby Jackson makes a move with the ball against Stevenson on Wednesday, Feb. 17, in Kalama. The Chinooks won 7-0 in their season-opener.

A Stevenson player attempts to make a pass as Kailey Shipley of Kalama plays defense on Wednesday, Feb. 17, in Kalama. The Chinooks won their season-opener 7-0 in front of a socially distanced smattering of fans.

A Stevenson player puts up a shot as Kalama's Elyse DiCristina jumps to defend the Chinooks' goal on Wednesday, Feb. 17, in Kalama. The Chinooks won 7-0.