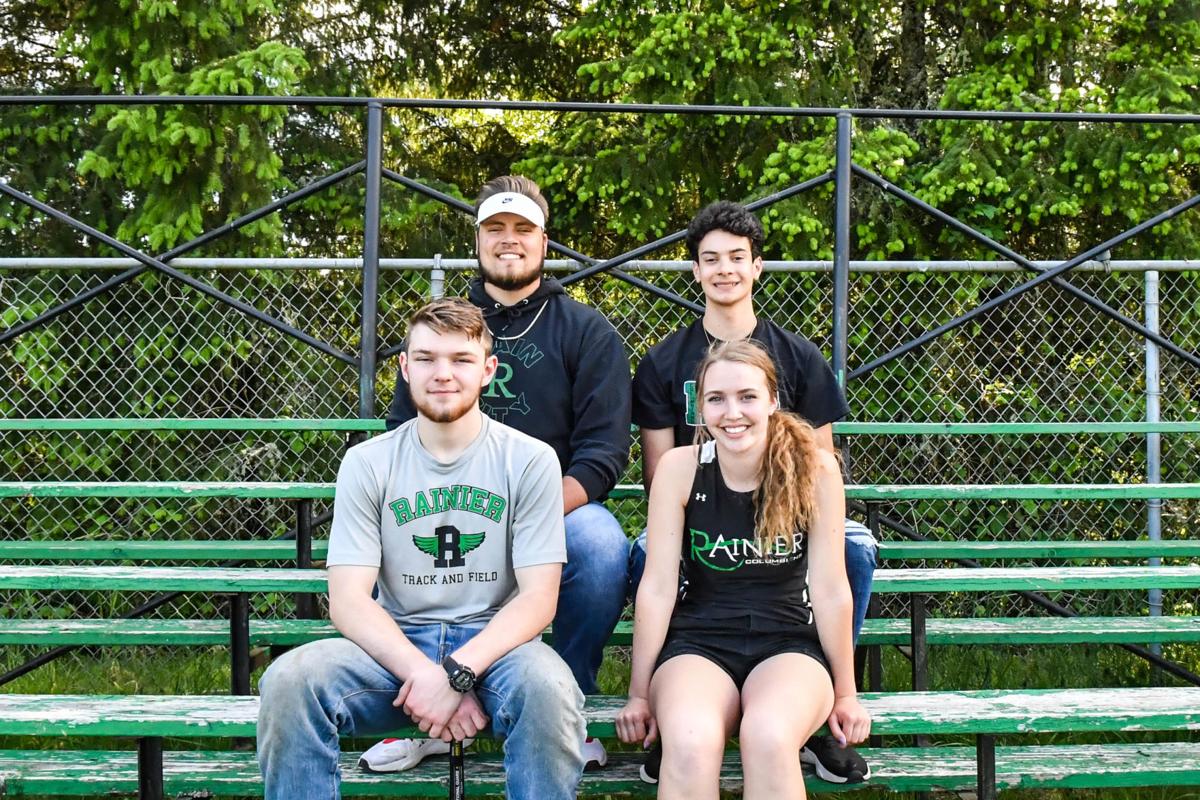 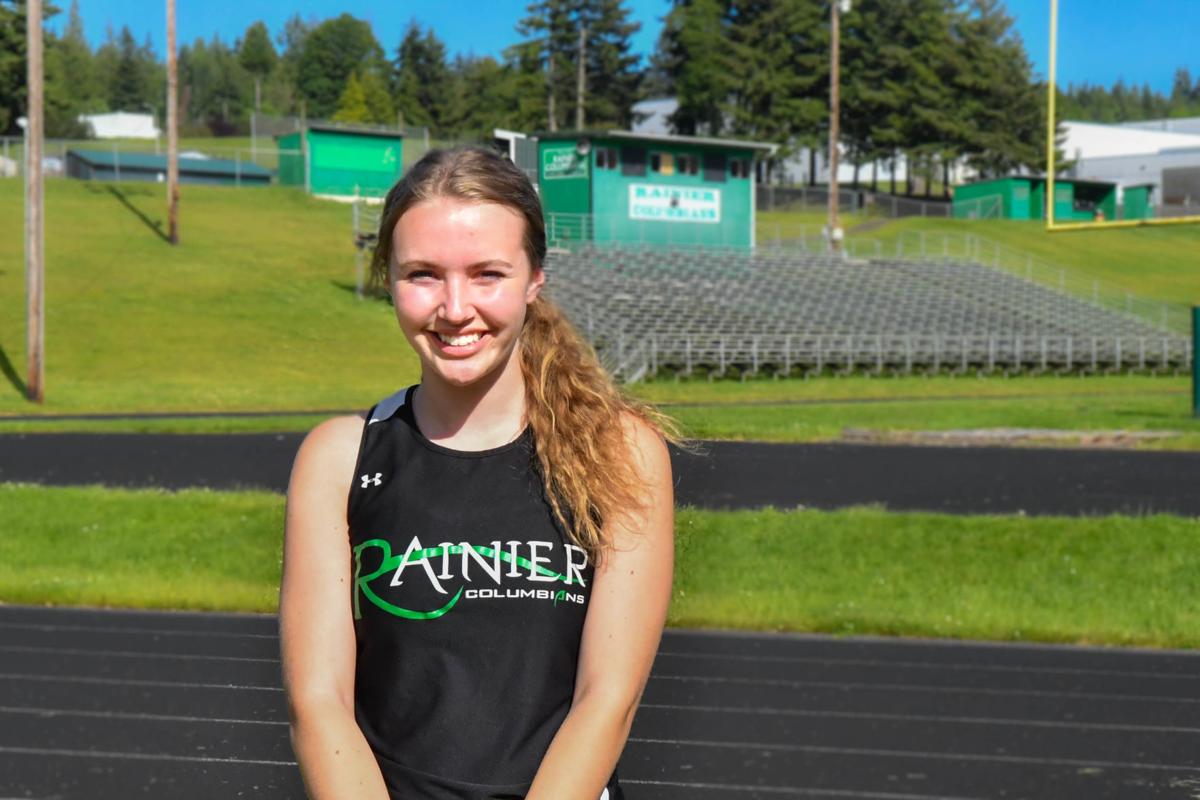 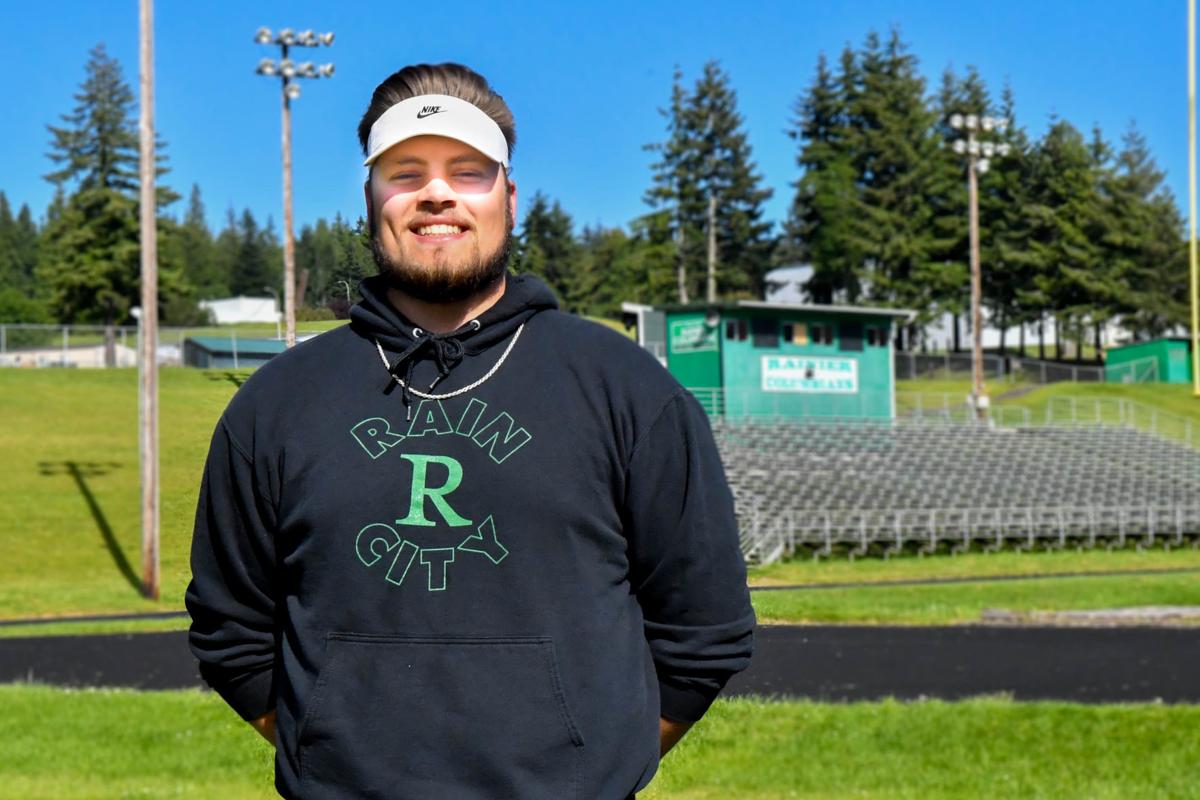 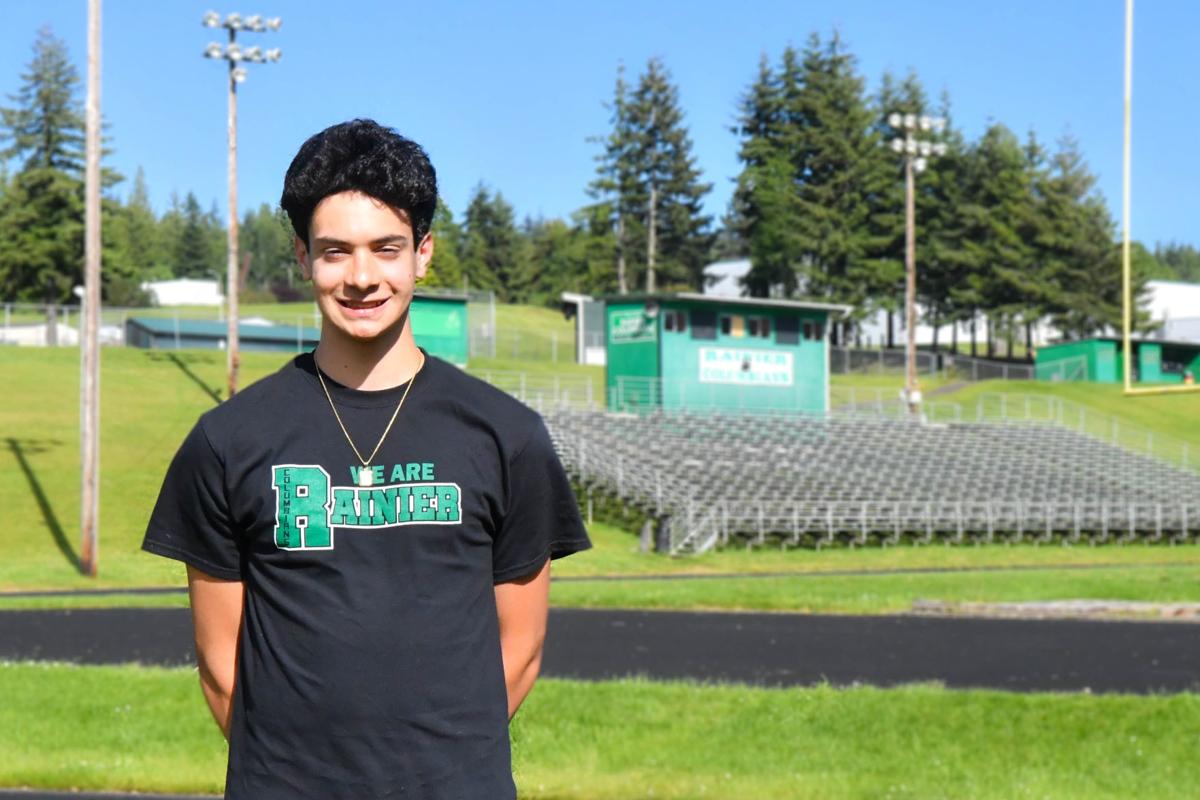 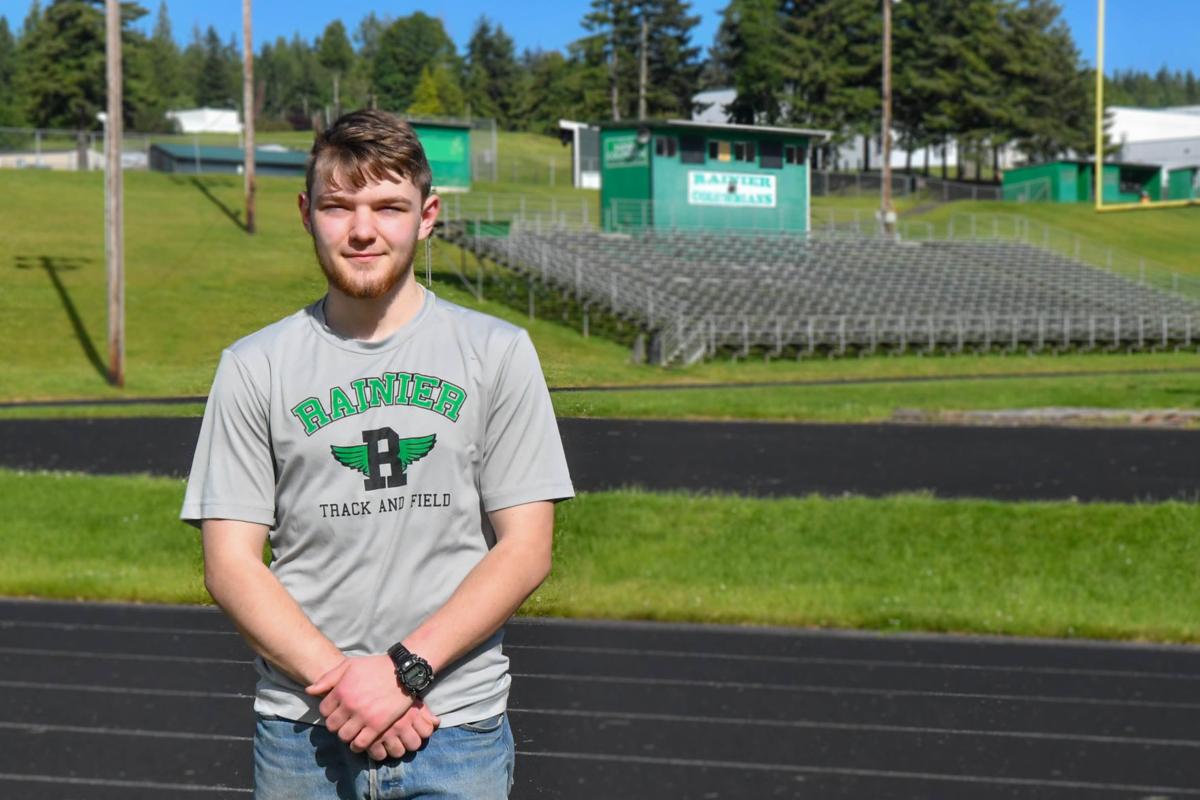 Not every high school coach can fall back on quotes from Confucius when adversity strikes. But that’s precisely what Rainier track and field coach Andrew Perri did.

When the spring sports season was taken away from his athletes Perri immediately thought of the impact it would have on the seniors who would never again be able to compete with “Columbians” proudly emblazoned across their chest. So he sat down and wrote down some words. A lot of words actually. And tried to put the loss into perspective for those most inconvenienced by the COVID-19 pandemic.

One section of Perri’s postmortem that stood out from the rest reads as follows:

“One thing that track has taught us is that tough times don’t last but tough people do. Tough people are successful in life. You are all tough and I can’t wait to see the leaders you become in life. As Confucius put it, ‘Our greatest glory is not in never falling, but in rising every time we fall.’”

Facing an onslaught of challenging league and district competition, Perri knew that no success could be taken for granted this year. But as his philosophical references indicate, those successes are not always the primary objective.

“We were expecting some strong individual performances this season. I’ve got some good up-and-comers in the program,” Perri noted. “It’s waves of talent and dedication and it matters how our waves match up against the other waves in our district.”

In a district with a fleet of private schools who don’t field baseball teams and have the ability to recruit, the going can be particularly rough. But that doesn’t mean the Columbians weren’t making plans to send some sort of contingent to the State meet.

“We bring a handful of state qualifiers every year,” Perri said. “This year I would have expected the same, a good handful of qualifiers.”

Among the State contenders on the boys side was senior Easton Crape.

“We had a couple good guys in different spots so we were looking at a District championship. We were looking to achieve a little bit of a higher standard than previously,” Crape noted.

For Crape, the experience of having a season shuttered was particularly isolated.

“I had a little bit higher emotions. I hadn’t made it to a practice yet because I was at outdoor school. So to not even be able to start my senior season was rough,” Crape added. “It might have been a blessing in disguise to not have to see my potential for this year. It made me sad knowing my whole high school career was over.”

According to his coach, Crape had plenty of potential. So much so that colleges are still seeking him out to throw for their school next year. Perri expected his senior leader to earn a mark of over 50 feet in the shot put this season with big improvements with the disc as well. Last year Crape placed third in State in the shot put. His senior year cut short, he finished his career with PR’s of 48’2.5” in the shot put, 130’2” in the discus, and 127’3” in the javelin

After joining the track team as a junior Connor Rea showed a natural aptitude for the sport. Last year he placed fifth at District in the high jump and managed to make State thanks to a wildcard berth. At State he set a new PR of 5’8” and wound up in seventh place.

Jaedan Abel  was set to turn a fall and winter of long distance running and swimming into big time success in his senior campaign. A distance runner who converted to the hurdles he was expected to be a front-runner for a State title in the 300-meter hurdles.

“I don’t think I could ever forget his infamous finishing kick on the course or on the track,” Perri noted. “That boy just has a lot of juice.”

Robert DePlessis was a senior distance runner with good energy who was returning to the track after a couple years away. He was expected to compete well in the daunting 3000-meter race.

Payton Smith was the rare thrower who also likes to dabble in sprints and pole vault. He had trained hard for his senior campaign and looked like an honest contender for a District title in pole vault.

Thomas Souther is another Columbian who ran cross country in the fall and swam in the winter. He was looking most tenacious in the 400 and 800 meter races, with a chance of surprising people in the 200-meter as well. That versatility has sparked interest from several colleges, according to his coach.

“Thomas never missed a practice and would have made a great team captain this year. He’s been an excellent role model for his younger siblings,” Perri noted. “It would have been really fun to watch him race against the private school boys in our league, as he would have been among favorites.”

Aiden Stewart, a sophomore, was another runner who was looking to make noise at the District meet, particularly in the 300 hurdles.

The Columbians had but one senior on the girls team along with a handful of other contenders to reach State.

“I know for us girls we were hoping we’d get a few more girls out and get a good relaying going,” Sydney Crawford, that lone senior, said. “ Personally I was hoping to improve and break my PRs.”

Crawford was a middle distance runner, a team captain, and was in line to serve as Valedictorian at graduation before that celebration suffered the same fate as spring sports.

“I was heartbroken when I heard the news and I tried to continue my training at home in hopes we’d be returning,” Crawford said. “When we got the final call that we were done I cried. It was hard knowing I’m never going to be able to step back out and have that feeling of a race again…it was over for me.”

Before it was over, though, Crawford made the most of her opportunity. She performed especially well in the 800-meter and 1500-meter races. Still, with younger sister, Chloe Crawford, also on the team, the sting hit especially hard in the Crawford household.

“I won’t be able to run one more time with my sister or have that last year with my team. It was hard when I realized I wouldn’t have that senior year I’d hoped for,” Sydney Crawford added. “I’m just thankful for the memories and the time I did get”

The Rainier girls would have been bolstered by Lilly Flores, a junior, and the sophomore duo of Chloe Crawford and Savannah Cash. Flores went to State last year in the 300 hurdles, while Cash placed third at District in the 100-meter race. Meanwhile, the younger Crawford was looking to find a path to State in the middle distances.

When asked to name the biggest loss to the program this year Perri didn’t hesitate.

“Momentum. There’s a lot to be said about momentum and I think this is a big hiccup in our momentum that we’d built,” the Columbians coach said. “But that applies to everyone. Every sport. Everyone is suffering right now.”

Then, taking a moment to pause and reflect on the question, Perri added a bit more perspective.

“It’s sad because a lot of seniors will never do track again. Who would have thought that last spring was their last time ever competing,” Perri added. “I hope if nothing else they learned how to be a better person from track. It’s not an opportunity that everyone gets. It’s a privilege.”