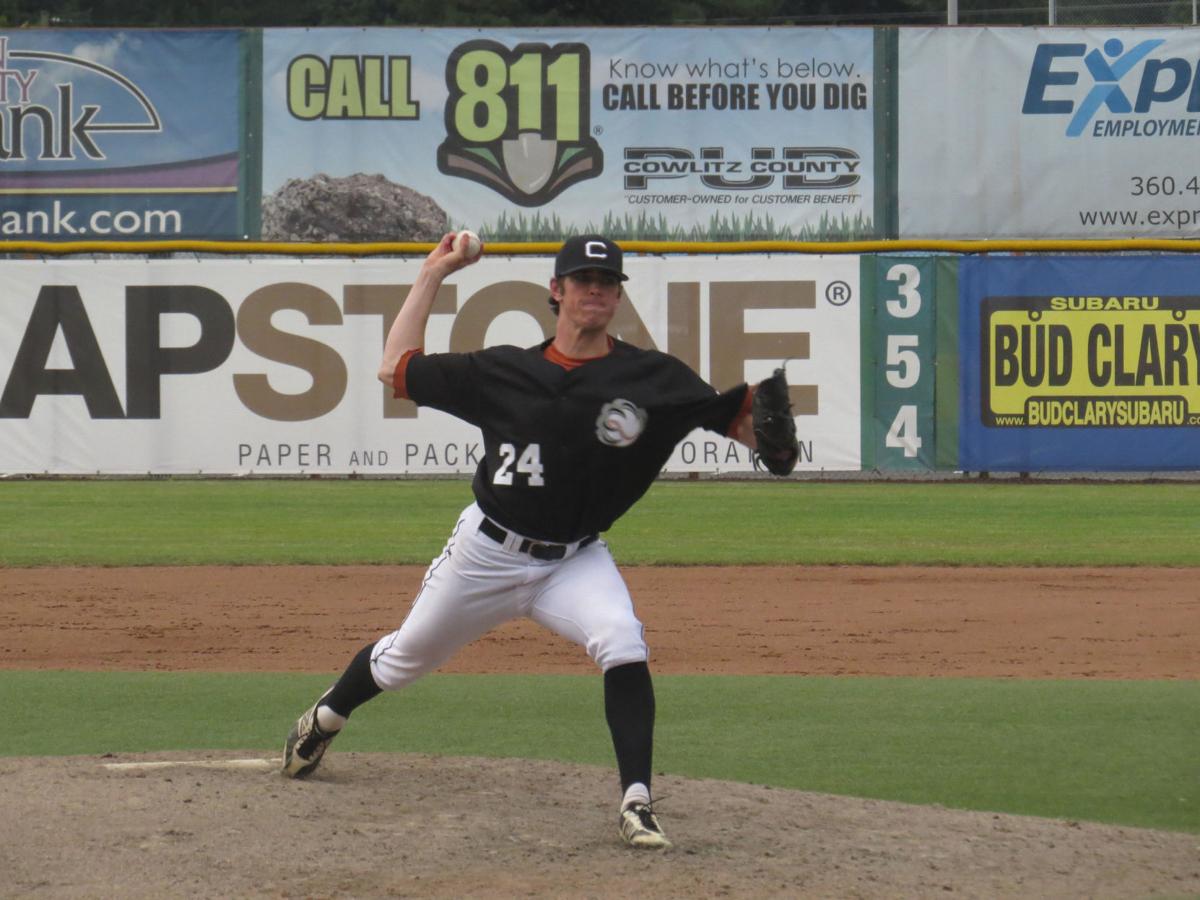 Shane Bieber delivers a pitch during the 2014 West Coast League season when he recorded a 1.44 ERA in six starts as a UC Santa Barbara junior. 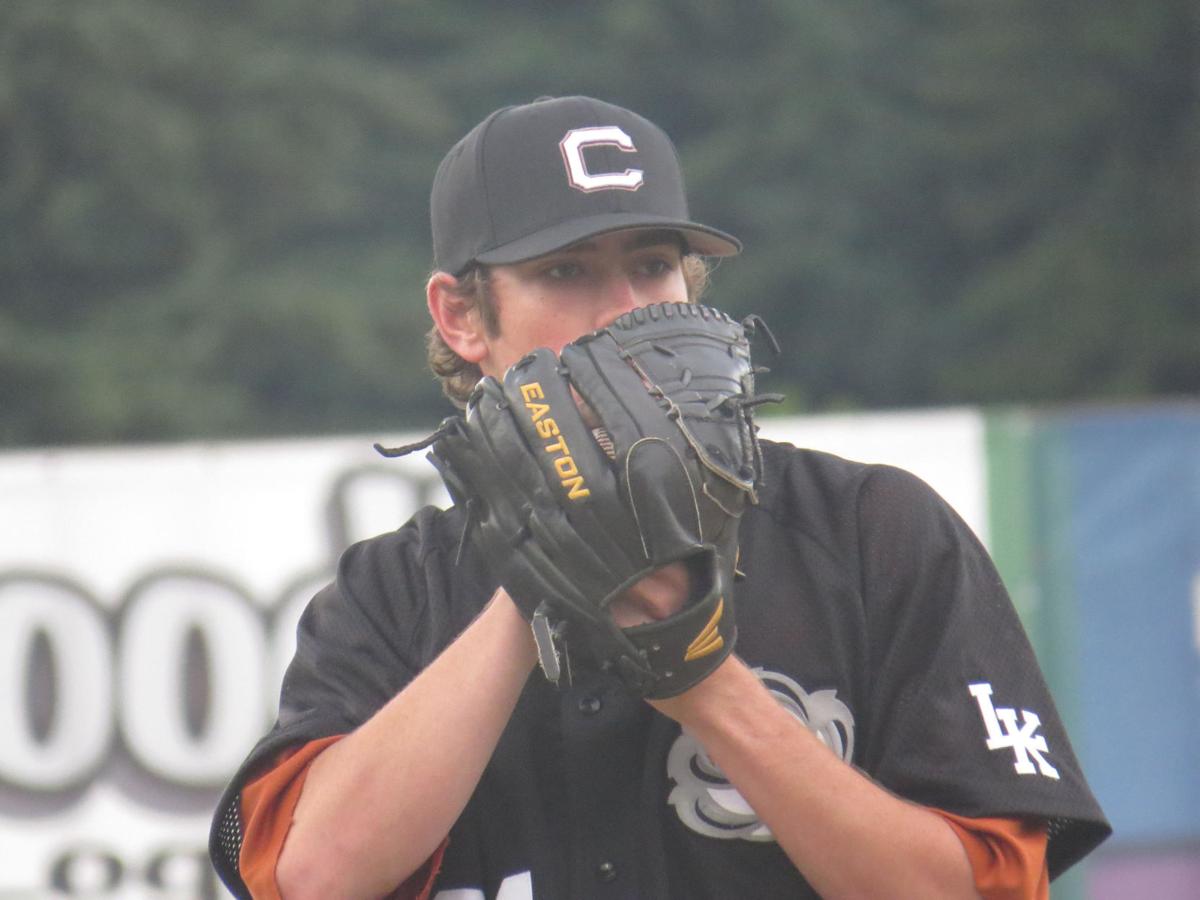 During the 2014 Cowlitz Black Bears season, starting pitcher Shane Bieber peers in for a sign. 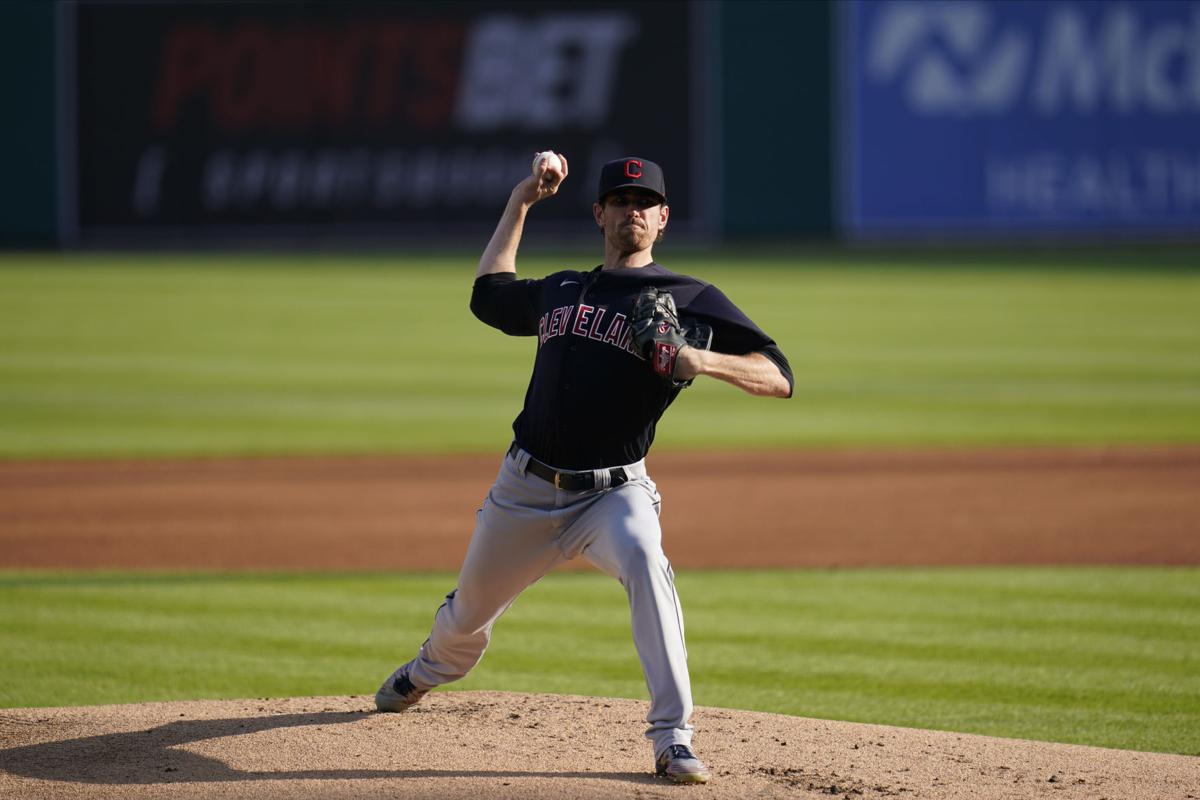 Shane Bieber throws against the Detroit Tigers in the first inning of a baseball game in Detroit Aug. 15, 2020.

He had just completed his sophomore season and was quiet, polite and unassuming. There was no indication that under the surface lurked a soul-stealing monster, eager and able to send batters of all kinds flailing and twirling and walking away defeated.

That quiet hurler was Shane Bieber, who is now the run away candidate for the American League Cy Young Award with the Cleveland Indians as they push for a playoff spot.

“You had a feeling every day he went out to pitch, we had a chance to win a game,” Jim Appleby, former Black Bears general manager, said.

Bieber was absolutely dominant in his one summer at David Story Field back in 2014.

In six starts, he allowed just six earned runs over 37 1/3 innings, good for a microscopic ERA of 1.44 with 41 strikeouts against just five walks. Still, he was able to post just a 1-0 win-loss record.

Of those six starts, Bieber tossed six or more innings of shutout ball four times. His only win came in his penultimate start against Kitsap, a 7-inning, three-hit shutout. His final start, he tossed 7.0 innings and allowed one earned run in a 3-2 loss to Corvallis.

During Bieber’s third start of the season the Black Bears lost 2-1 in 17-innings at Bellingham. Tony Bonacci, the team’s owner, said that contest is still the longest game in Black Bears history, as well as one of the best games he’s seen in person.

Bieber also dueled with Nick Martinez, the 2014 Pitcher of the Year in the WCL who is currently in the minor leagues.

In Bieber’s second start, a 3-0 win against Kitsap, Bieber tossed up one of the best lines then-manager Tim Matz had ever seen.

A pitching coach at heart, and currently one at Orange Coast College in California, Matz has a special set of stats he uses to evaluate players and performances. It’s got some of the normal stuff — number of pitches, hits, walks, etc. — but also some more specialized stuff like strike percentage, which is important but often overlooked by fans.

That outing, Matz recalled, 79 percent of Bieber’s 80 pitches were strikes — for reference 70 percent is really good — and none of those pitches were above the knees. Even then, Bieber was consistent and relentless.

“He was knee to top of shin so consistently it was a amazing,” Matz said. “He pitched to both sides of the plate. We ere like, ‘If he picks up some (velocity)...’ because he had a good breaking ball, had a really good, professional mound presence, even when he was young. You could tell he was different.”

Even with that success, then-manager Tim Matz wasn’t sure about his next level chances. Bieber was touching 90 miles per hour with his fastball, it wasn’t the overpowering 96, 97 miles per hour he’s chucking these days.

“To add as much as he did, I don’t want to say I’m surprised,” Matz said. “He just had that good frame, he could take on good weight if he really got after it. I guess I’m pleasantly surprised by his success. I thought he’d be really good, but I didn’t know how long it would take him to get to the big leagues, if he got there. But boy, he did it and clearly has made the most of it. It’s been really impressive.”

As a big leaguer, Bieber has been one of the best pitchers in baseball over the past couple seasons.

In this truncated, pandemic-altered campaign, he was the fastest to 100 strikeouts as a starting pitcher, reaching the plateau in just 62 1/3 innings.

In his sophomore MLB campaign a year ago, Bieber made the All-Star game roster for the first time and won the MVP after striking out the side — Wilson Contreras, Ketel Marte and Ronald Acuña, Jr. — in his lone inning of work. He then wound up finishing fourth in the American League Cy Young Award voting.

This season, he’s been even better.

His ERA is best in baseball, and his 64 2/3 IP is the most in the game. His 14.2 K/9 is tops and his 102 Ks leads the majors, as well. Perhaps most importantly for baseball insiders, he is tied for second in all of baseball in WAR at 2.9. For reference, Kyle Lewis has posted a 1.8 WAR as he goes for Rookie of the Year.

And to ask the Black Bears, this was never out of the realm of possibility for the lanky sophomore from UC Santa Barbara.

For the Black Bears, and the WCL itself, Bieber’s rise, along with fellow alumni like Mitch Haniger, Marco Gonzales, and eventually Adley Rutschman, demonstrate the quality of the WCL rosters 15 years after its founding

“The level of play league-wide continues to increase,” Bonacci said. “And we’re only getting better.”

Finding an edge: Travel teams help diamonds in the rough

There was a time when the size of the high school you attended mattered for anyone trying to play their way to the next level. There have been…

Normally a baseball player might already have as many as 40 or 50 games under his belt by the time fall ball rolls around. Those games in Sept…

Normally a baseball player might already have as many as 40 or 50 games under his belt by the time fall ball rolls around. Those games in Sept…

Kelso overcame a 14-7 halftime deficit to down the rival Mark Morris Monarchs 15-14 back in 2009, and you can hear it again on Saturday.

Buzzer Beater: 'Through the Decades' photo contest entries due Sunday

The clock is quickly winding down on the first half of The Daily News’ ‘Through the Decades’ prep photo contest.

Let the voting begin: 'Through the Decades' photo contest draws dozens of entries

The entries are in and they are phenomenal.

Greg Bussell steps down after 19 years at Mark Morris

Greg Bussell walked in and stood in the doorway, removed his sunglasses and tucked them in his pressed shirt.

There’s not a particularly lengthy list of area athletes who have wound up chasing their collegiate dreams all the way to the Big Ten. But as …

Shane Bieber delivers a pitch during the 2014 West Coast League season when he recorded a 1.44 ERA in six starts as a UC Santa Barbara junior.

During the 2014 Cowlitz Black Bears season, starting pitcher Shane Bieber peers in for a sign.

Shane Bieber throws against the Detroit Tigers in the first inning of a baseball game in Detroit Aug. 15, 2020.