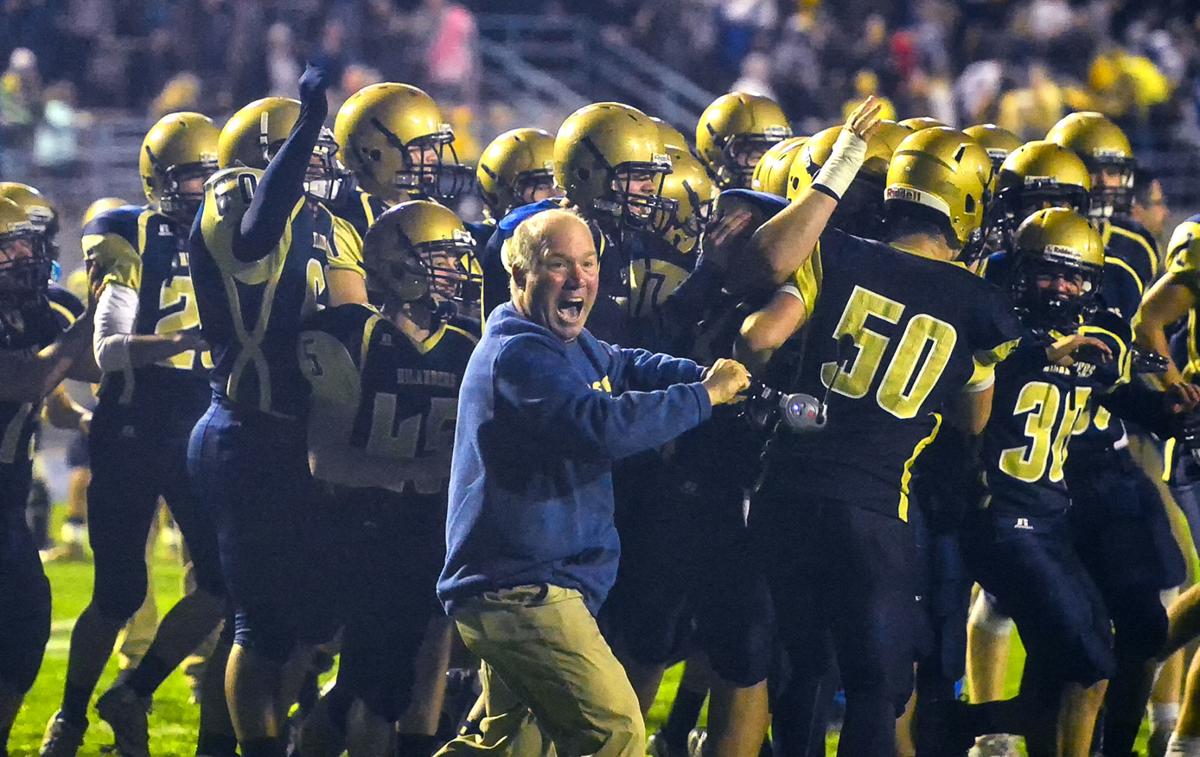 Last year's league play ended with theatrics, as Kelso topped Hudson's Bay 26-23 with a buzzer-beating touchdown to seal the No. 2 seed. The two teams again meet in Week 9 this year. 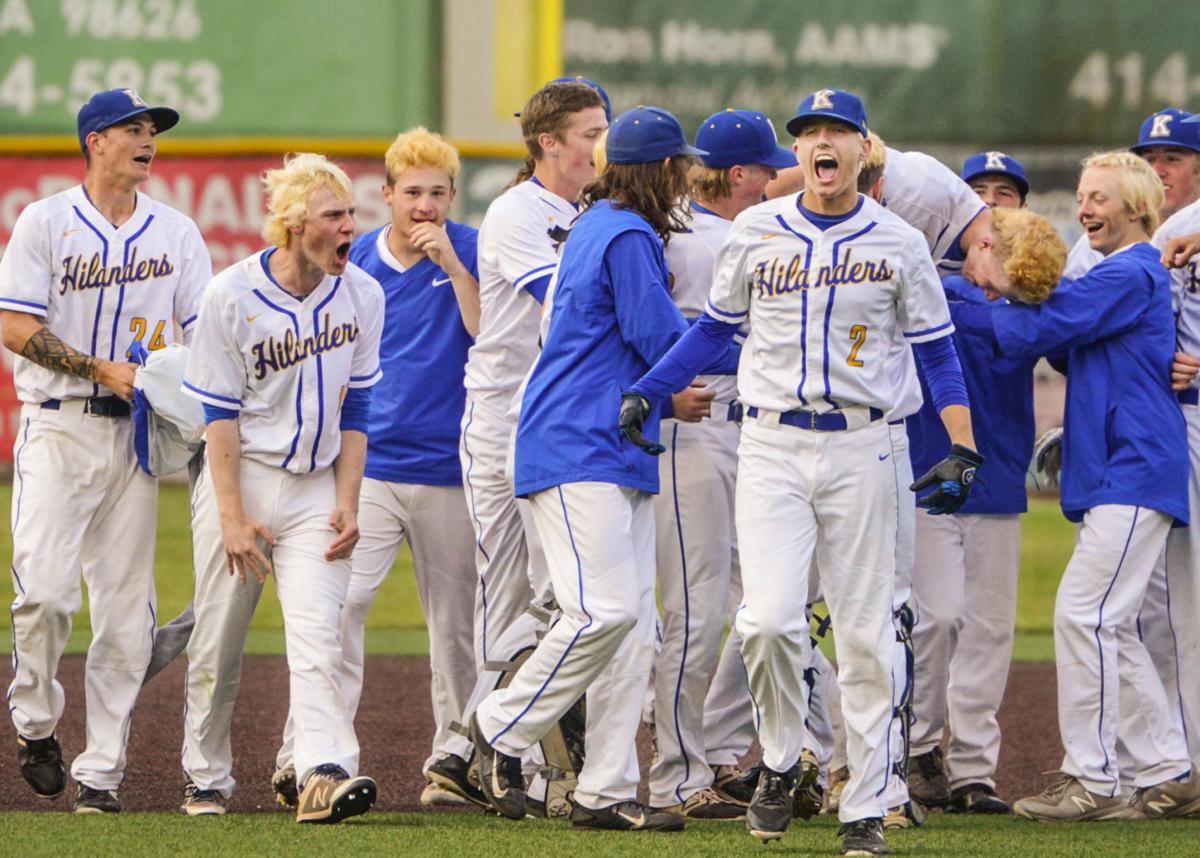 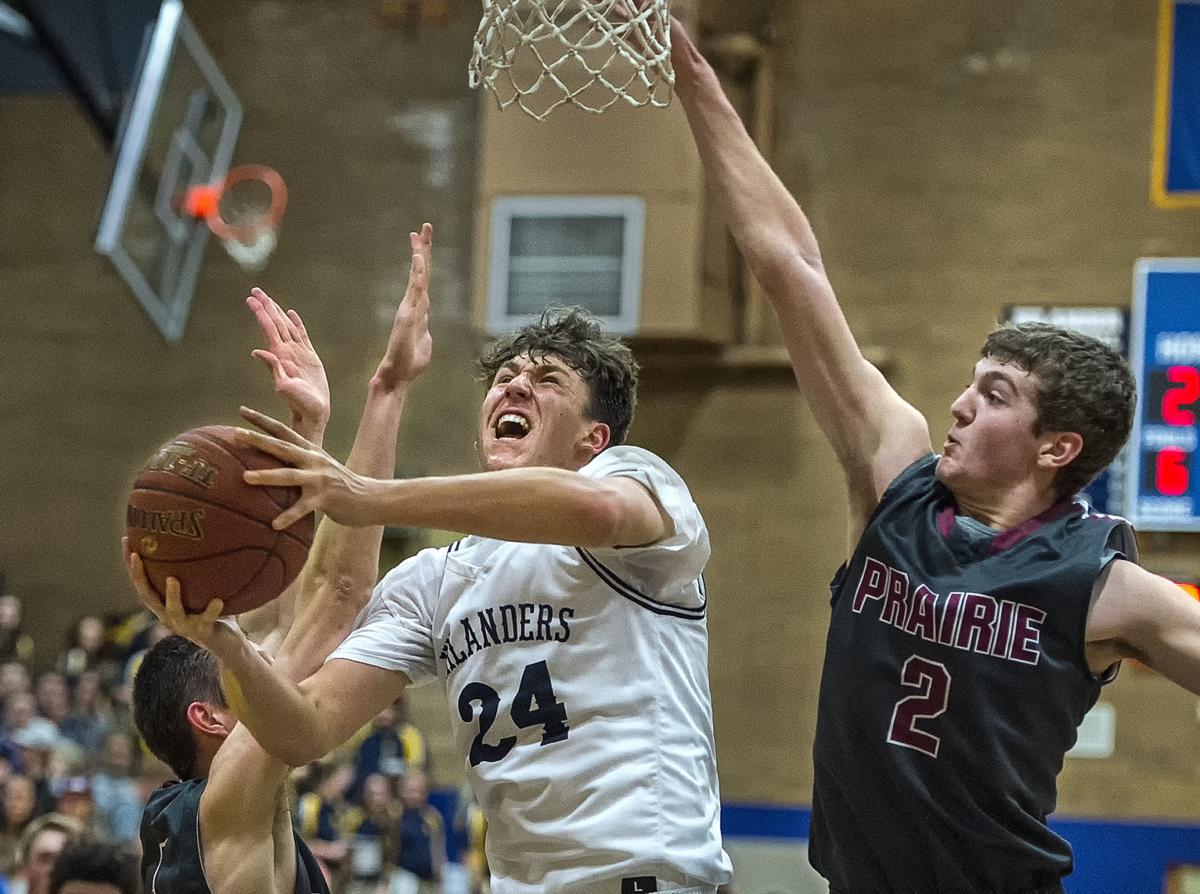 Kelso’s Shaw Anderson and the Scotties showed they were among the best teams in Class 3A with their best finish in 59 years. 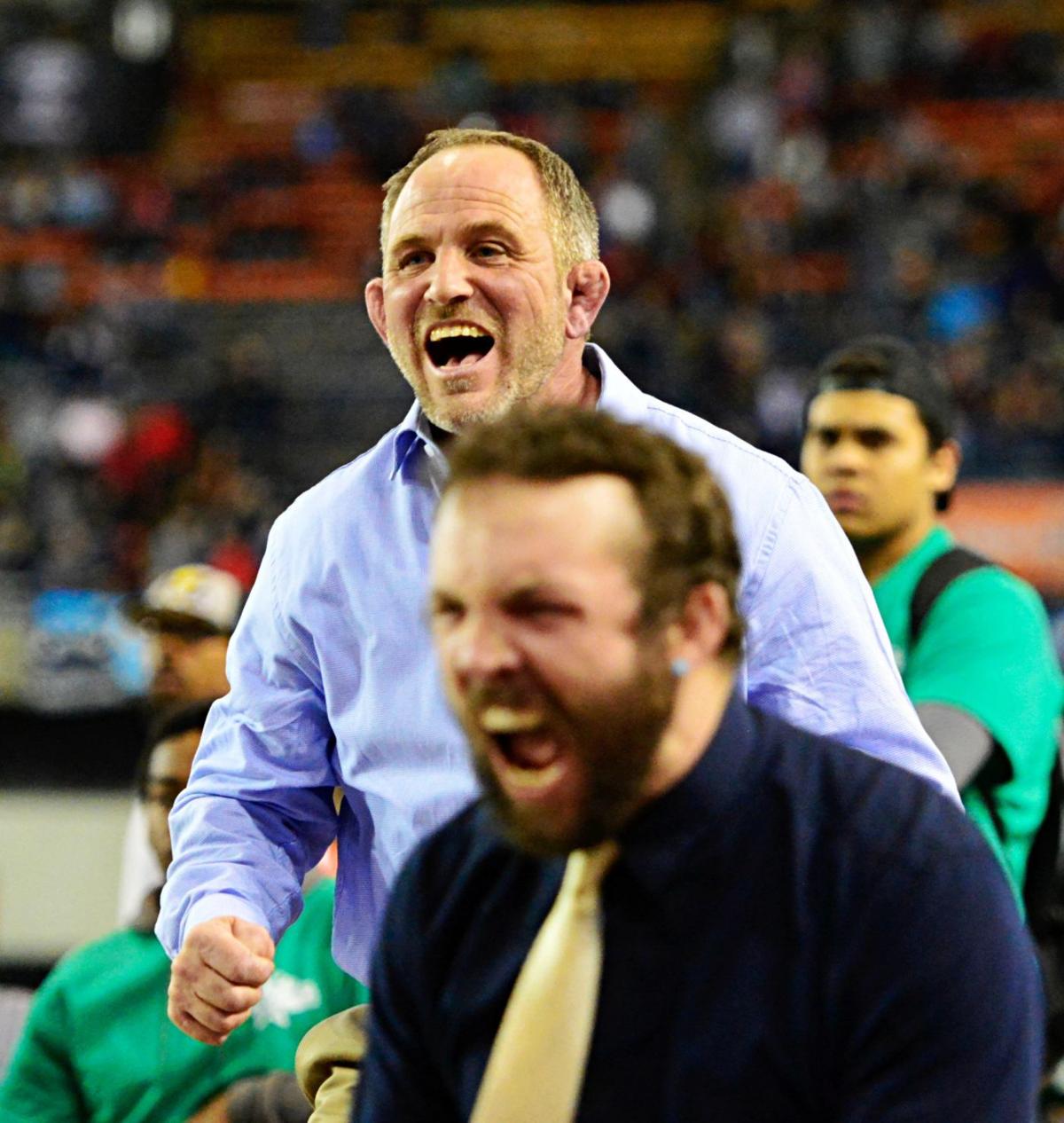 Kelso's Bob Freund, back, celebrates his son, Christian Freund's, overtime takedown in the 138-pound championship match. Assistant Brandon Sitch, a four-time state champ, yells in front. Bringing in great coaching is just one reason why the Hilanders continue to excel in athletics. 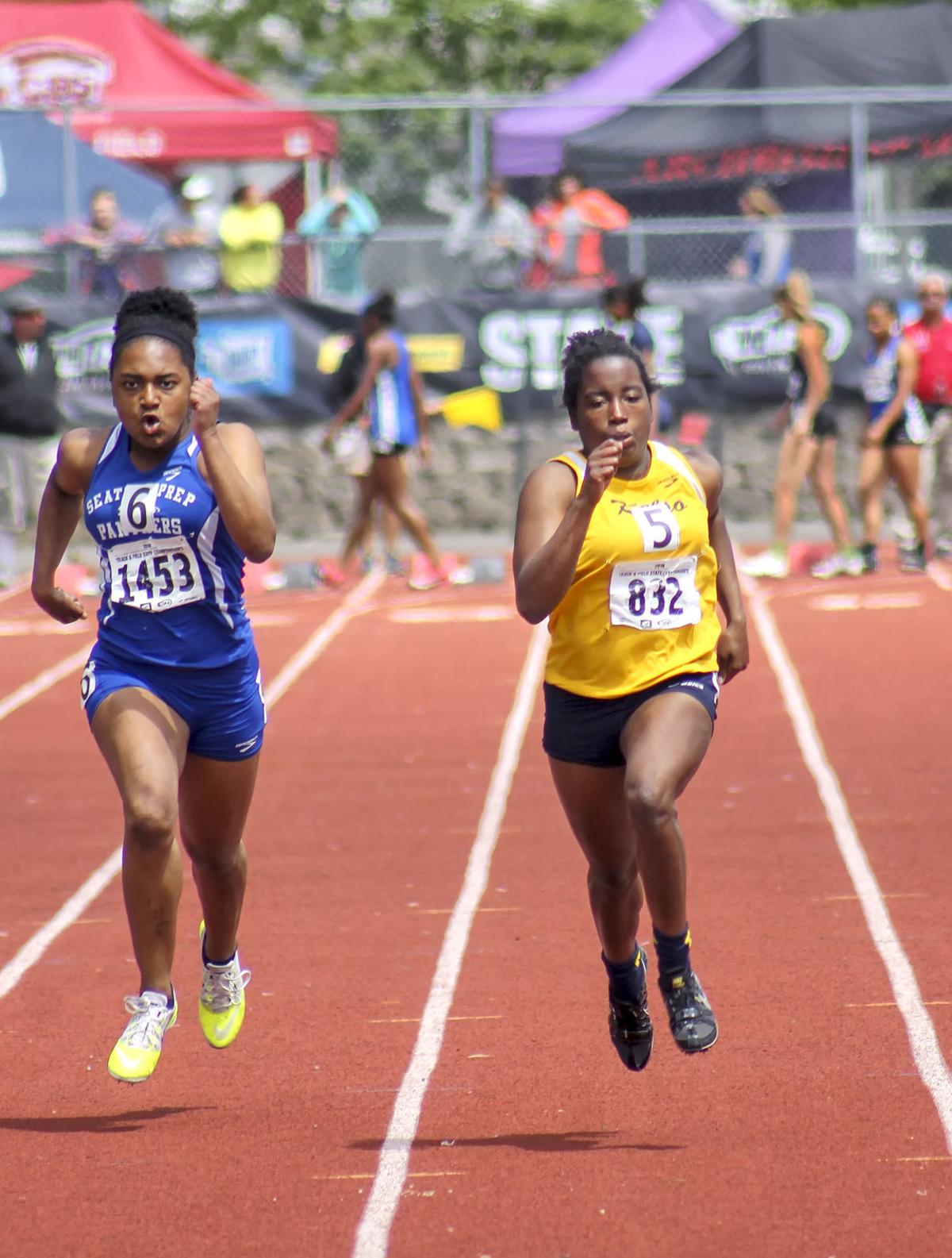 When athletic director Len Hiatt graduated from Kelso High School in 1993, his principal pulled him aside and told him, “this is the best senior class I’ve ever been associated with.”

Twenty-five years later, Hiatt echoed those words to the Class of 2018.

“This is probably the best senior class I’ve ever been associated with,” Hiatt said earlier this month. “This group is fantastic. They’re unreal.”

It certainly was a year to remember at Kelso High, which earns TDN’s Program of the Year honor, edging out Kalama and the Chinooks’ two team titles.

The boys’ basketball team had their best finish in 59 years; the wrestling team brought home yet another state trophy and academic state championship; the track team etched plenty of new school records. Oh yeah, and there was that baseball team.

Mired in a middling season at 7-7, the Scotties were just vying for a playoff spot at one point. But when they got hot, boy did they. A team decorated with 12 seniors went 4-1 in the bi-district tournament, securing a regional spot in tense 2-1 and 3-2 loser-out games with Prairie and Timberline, respectively.

But the Scots didn’t stop there. They ran past defending champion Gig Harbor in the regional opener and shut out O’Dea 9-0 to make the state semifinals. A 5-4 walkoff win later, and the Scotties were in the championship game.

“What the kids did to make the state-title game and beat the teams we beat is just an incredible feat,” baseball coach Tom D’Aboy said. “It’s all tribute to the kids. They all came together at the same time and did something really special.”

D’Aboy certainly knows what special looks like — he was the junior-varsity coach on the basketball squad three months prior. Led by the much-improved Shaw Anderson, Kelso went on a run nobody in the state could foresee. Even Anderson admitted he was surprised to be in the bi-district title game after winning games against Peninsula, Wilson and North Thurston.

The Scots went ahead and handily topped previously unbeaten Lincoln to win the bi-district championship. Because why not? They rattled off wins against Timberline and O’Dea to finish fifth in Class 3A. Yeah, the same Class 3A that’s long been owned by Metro League powers, usually followed by South Sound talent pools.

“These kids are representing the Kelso community, not just the high school, but everybody here,” D’Aboy said. “A lot of people are excited and proud of what these kids did.”

As much as this year belonged to stellar athletes — girls like Carlee Sams and Tayla Beavers, guys like Bryce Miller and Christian Freund — coaches played an equal part in making this small-town school a recognizable force in 3A athletics.

Because at Kelso, every coach is about more than just their sport. Football head Steve Amrine is the C-team baseball coach, Joe Krieder (track) and Joe Kinch (basketball) are coordinators on the football squad, D’Aboy is the junior-varsity basketball coach and girls’ hoops coach Jennifer Hamilton helps out with track. The list goes on, but therein lies the key to success across the board for the Hilanders.

“Our coaches are incredible,” Hiatt said. “They all build camaraderie among themselves, and they just click. You don’t have this confrontation. One thing you see from time to time is coaches fighting over kids or gym space. That doesn’t happen. … You’ll see Tom on the weekends, and he’s hanging out with Joe Kinch. There’s this tradition of camaraderie, and it’s what it should be.”

Those bonds also ensure every coach is on the same page when it comes to the students.

“It’s just a matter of trying to get our kids to understand that it’s a big picture,” D’Aboy said. “They’re all hearing the same message. … There’s a lot of respect (between coaches), a lot of admiration. They see that we care about more than just our sport. We care more about Kelso athletics. We put in as much effort and energy coaching the JV basketball team or the C-squad baseball team. … (The kids) can see it; the parents see it. … I feel really lucky to be here.”

It has all led to quite the year for Kelso fans. Kelso alumni far and wide have tuned into Jim DeBruler’s radio broadcasts — a big asset in getting community support, D’Aboy said — and have listened to Hilander history being made this season.

“There are a lot of quality individuals going through this program right now — good kids, good families,” Hiatt said. “Hopefully it stays that way for a while.”

2 place the baseball team finished at state, their best result since 2008.

5 place the basketball team finished at state, their best result since 1950.

Program of the Year: Area Leaderboard

For the second straight year, we used a formula to figure out the top programs in the area. The formula calculates things such as postseason s…

Last year's league play ended with theatrics, as Kelso topped Hudson's Bay 26-23 with a buzzer-beating touchdown to seal the No. 2 seed. The two teams again meet in Week 9 this year.

Kelso’s Shaw Anderson and the Scotties showed they were among the best teams in Class 3A with their best finish in 59 years.

Kelso's Bob Freund, back, celebrates his son, Christian Freund's, overtime takedown in the 138-pound championship match. Assistant Brandon Sitch, a four-time state champ, yells in front. Bringing in great coaching is just one reason why the Hilanders continue to excel in athletics.