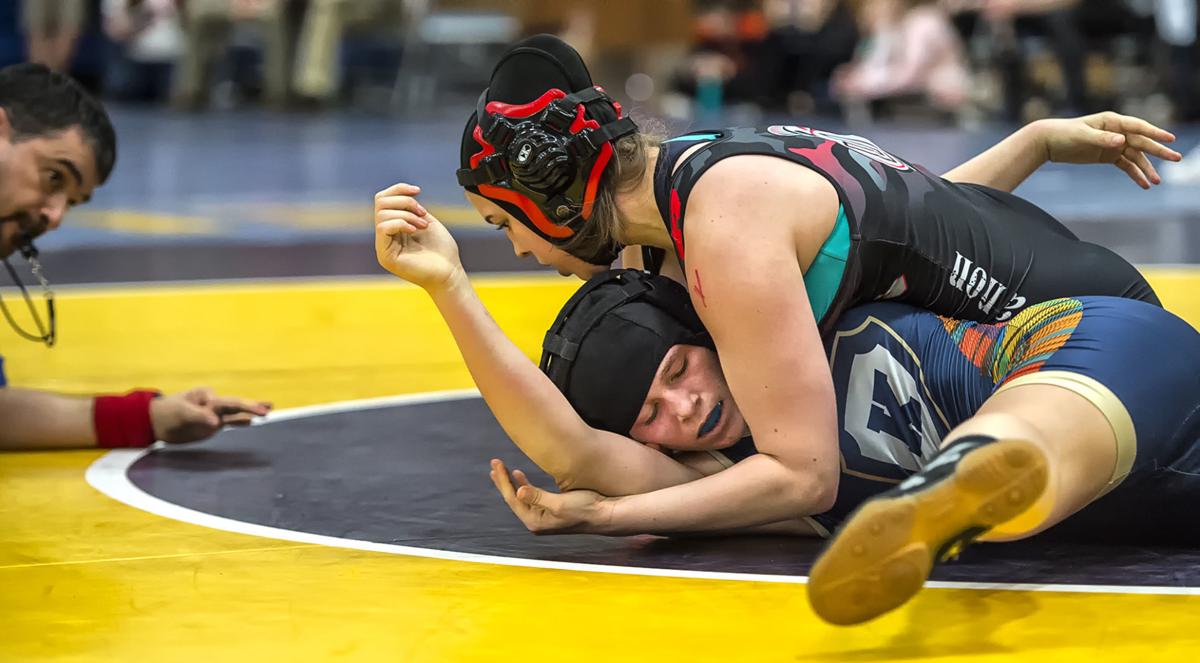 Kelso’s Makenna Vegh struggles to twist free from being pinned by Neveah Cassidy of Union during their quarterfinal 145-pound quarterfinal match, which Cassidy won. Vegh came back later in the day to top Cassidy in the third-place match. 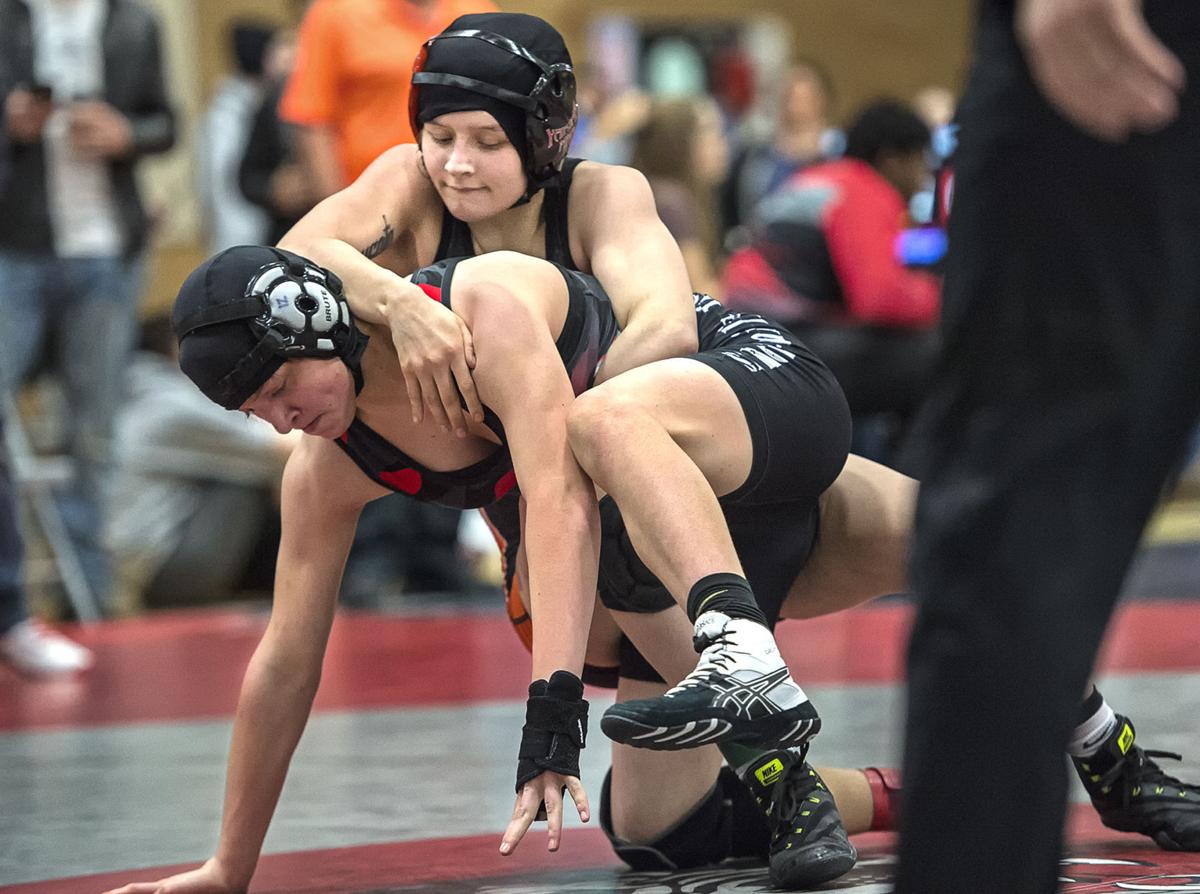 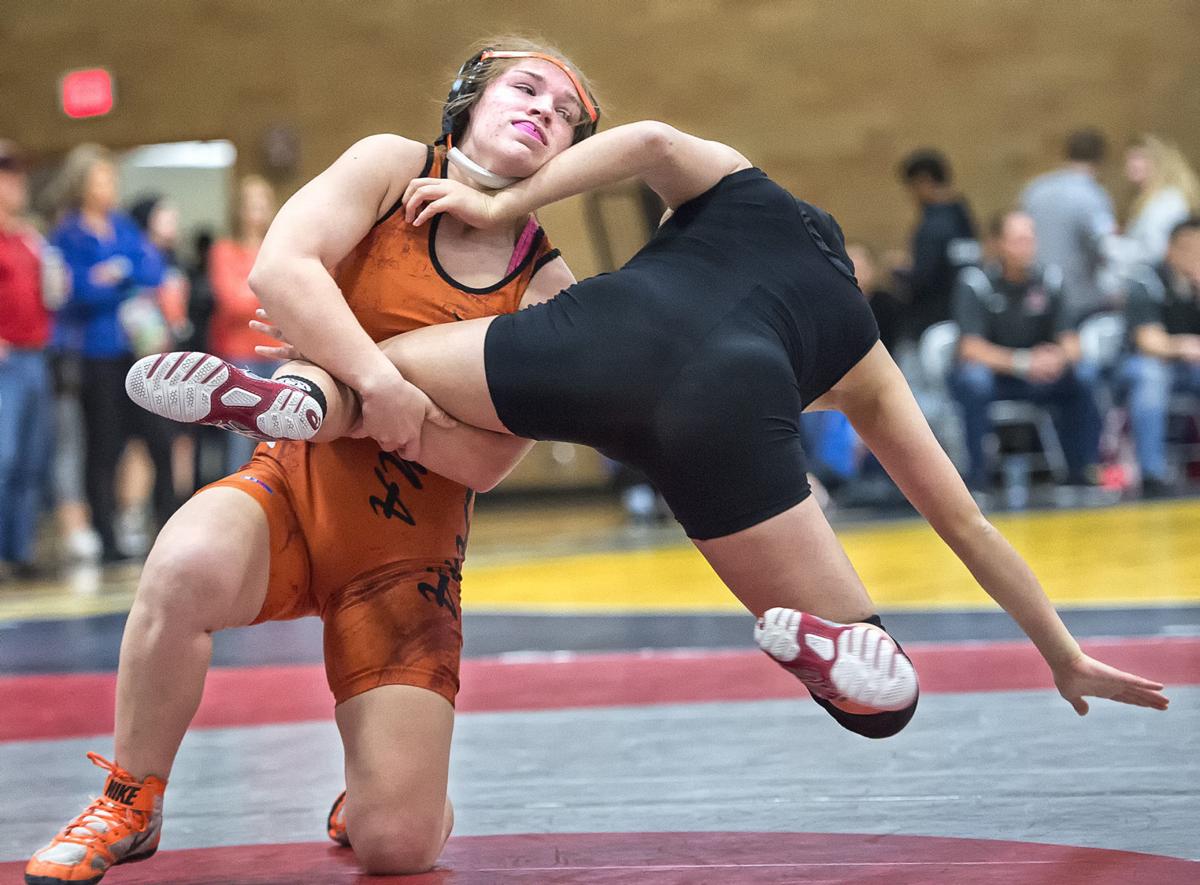 Add Davis High’s Cameron Guerin to the list. The three-time state champion earned five pins to capture the 125-pound title on Saturday and move to 110-0 in her career.

She very well could end up as Washington’s fourth girl to win four straight state titles this February.

“I treat every tournament the same, no matter what,” Guerin said. “It’s just another tournament for me. Keep myself calm, cool and collected. Listen to my coaches for sure, and stick to my gameplan and flow. Just wrestle the whole time.”

Kelso got an early look at what exactly the senior can do, as she grappled alongside the state’s best girls, and even some from outside the state — such as Las Vegas’ Peyton Prussin, who won the 105-pound title with five pins.

This is what the Kelso Girls’ Invite has become. It’s the region’s premier girls’ event, an early preview of February’s Mat Classic, and for the first time in its 11-year run, exclusively a girls’ tourney.

The JV boys’ tourney that formerly ran alongside the girls’ event was moved to Woodland this year, making room for 575 girls to have the spotlight to their own.

“This is awesome,” Kelso coach Bob Freund said. “I love the boys’ tournament, but this is good to have this as just the girls.”

And against some of the best, the home squad fared quite well. Finishing ninth with 109.5 points, the Lassies saw four girls take home trophies. Yelm won the tourney with 188 points, followed by Union (166.5) and Sunnyside (157).

Makenna Vegh (145 pounds) earned a pair of pins Friday before falling to Union’s Neveah Cassidy in the quarterfinals. No mind. Vegh responded with two more pins to secure a spot in the third-place match, where she battled Cassidy again.

This time an early takedown attempt from the Titans’ grappler allowed Vegh to roll through it and earn the pin just 44 seconds in.

“I called it a little revenge pin,” Vegh said. “I wanted to get it, so I just went out there and did my best.”

“Our girls did great. I’m really proud of them,” Freund said. “We’re beginning to get back to where we were with the girls.”

Other local highlights included Rainier’s Elena Roubal, who placed seventh at 145 pounds, and Kalama’s Makenna Speed, who made the 130-pound semifinals with a major decision over Mount Baker’s Gaberill Mata before falling to eventual champ Carly Smith by 5-4 decision.

Speed responded with a pin before falling by 2-0 decision in the third-place match. An early takedown was the only scoring in the match.

And while the event won’t offer state glory, it does offer an opportunity for girls to see how they stack up with the best, and a few uniquely Kelso prizes.

All girls were given trophies decorated with the classic Hilander mascot, and a yellow rose.

Because you can’t leave Kelso High without a little gold in your hand.

Video of all 14 championship matches, plus interviews with Kelso's Makenna Vegh and Davis' Cameron Guerin.

Highlights from all 14 championship matches at the Kelso Girls' Invite on Saturday, Jan. 6, including interviews with Kelso's Makenna Vegh and…

Kelso’s Makenna Vegh struggles to twist free from being pinned by Neveah Cassidy of Union during their quarterfinal 145-pound quarterfinal match, which Cassidy won. Vegh came back later in the day to top Cassidy in the third-place match.