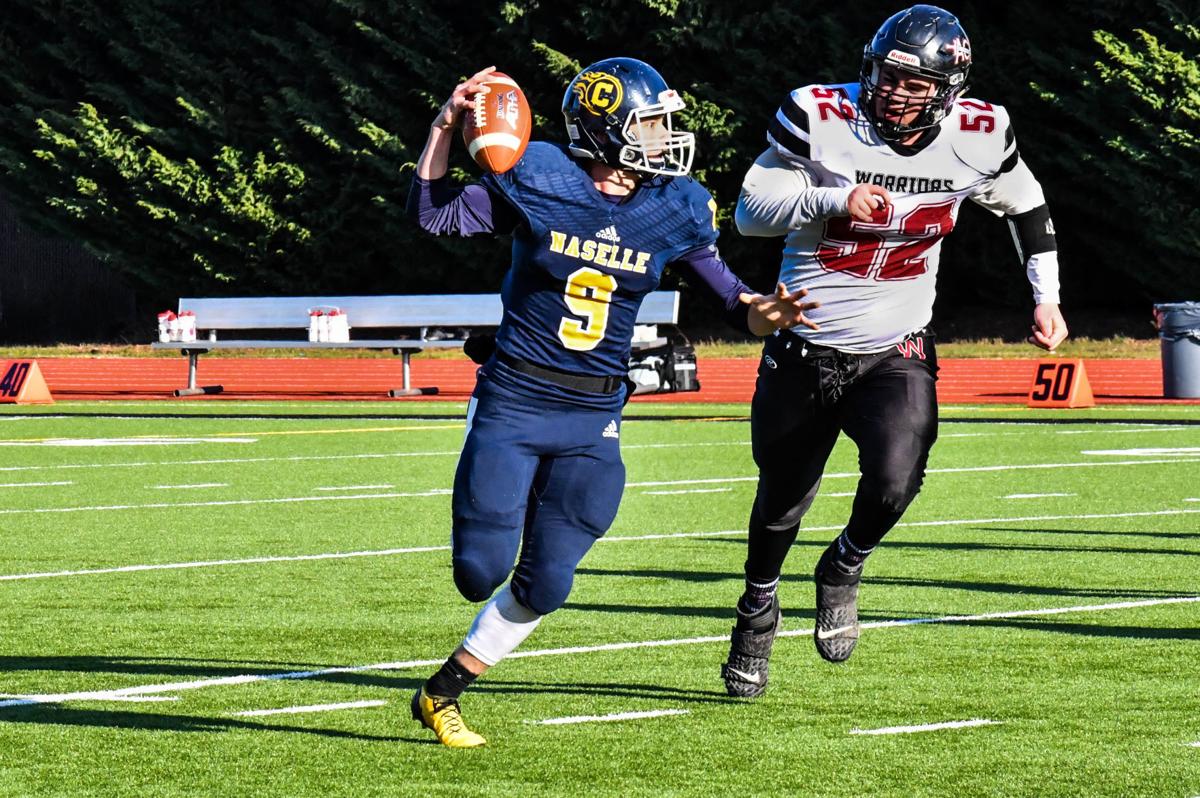 Ethan Lindstrom gets ready to pass. 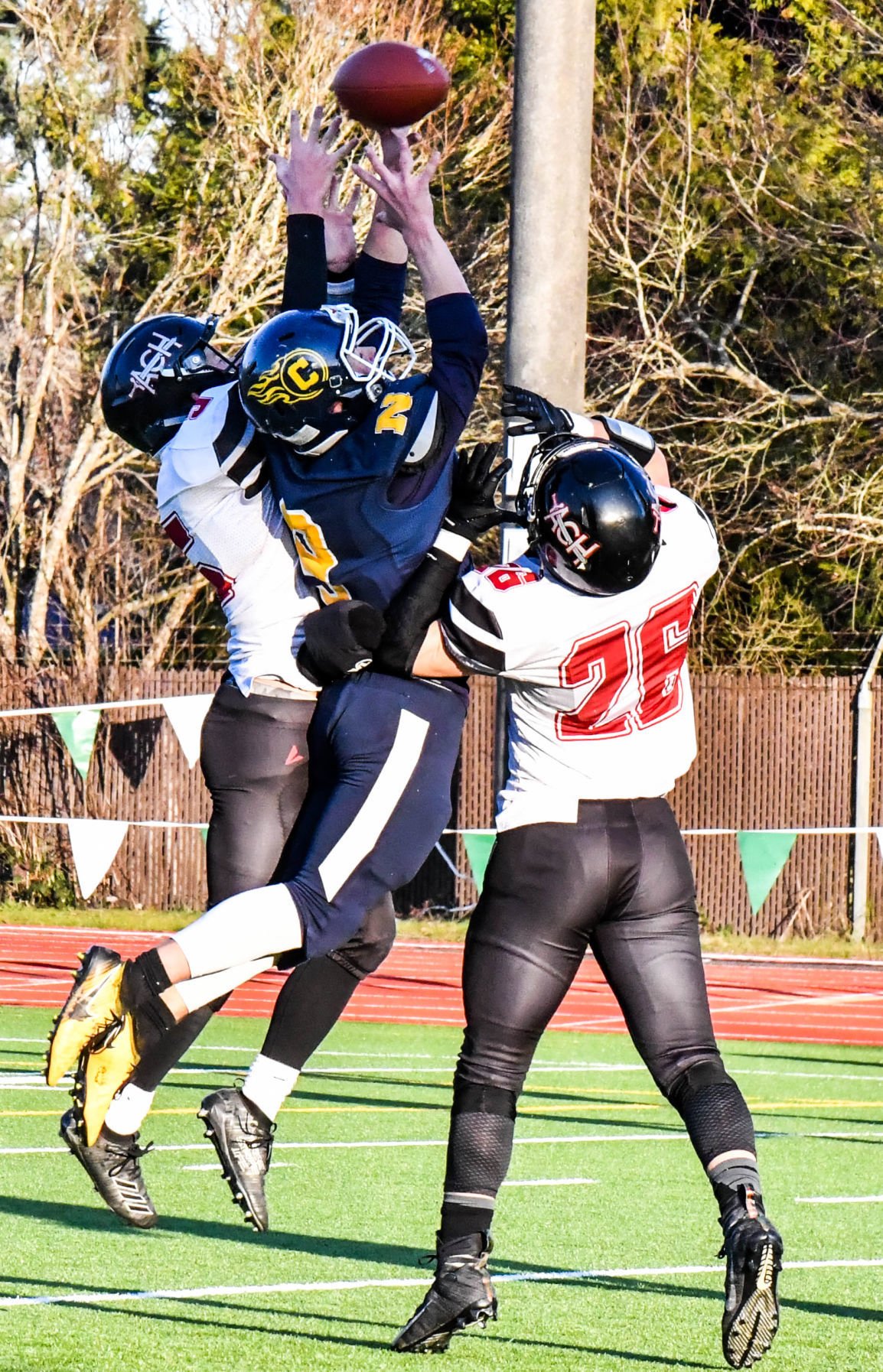 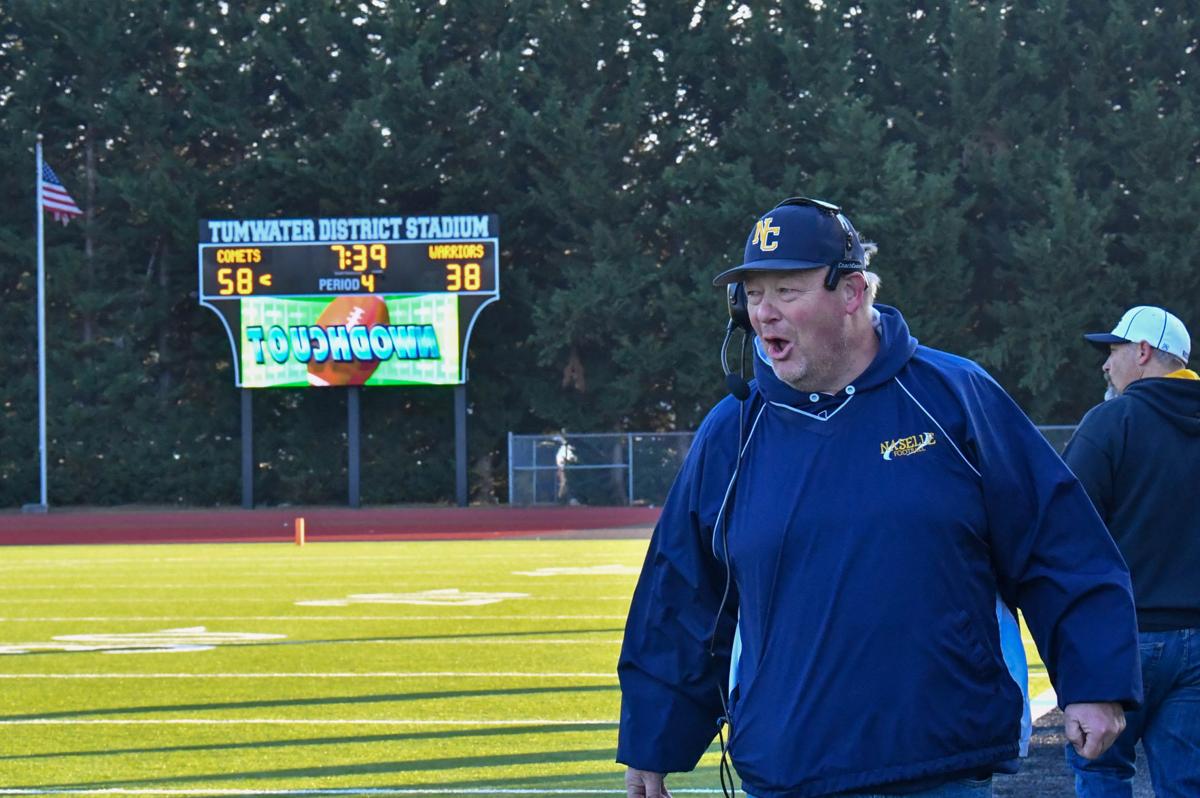 Coach Jeff Eaton screams after a touch down. 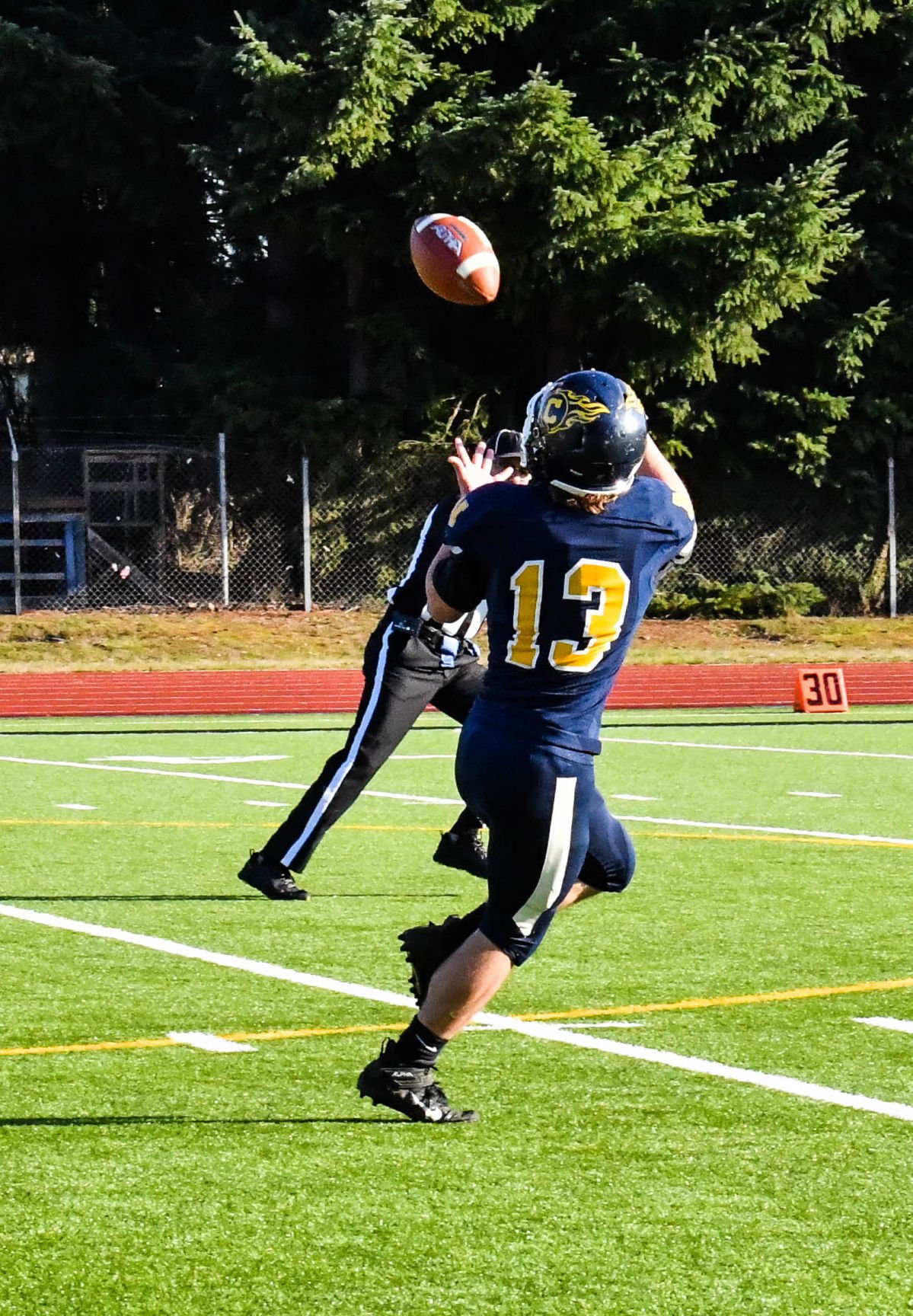 Daniel Holt catches a pass and makes a touchdown run. 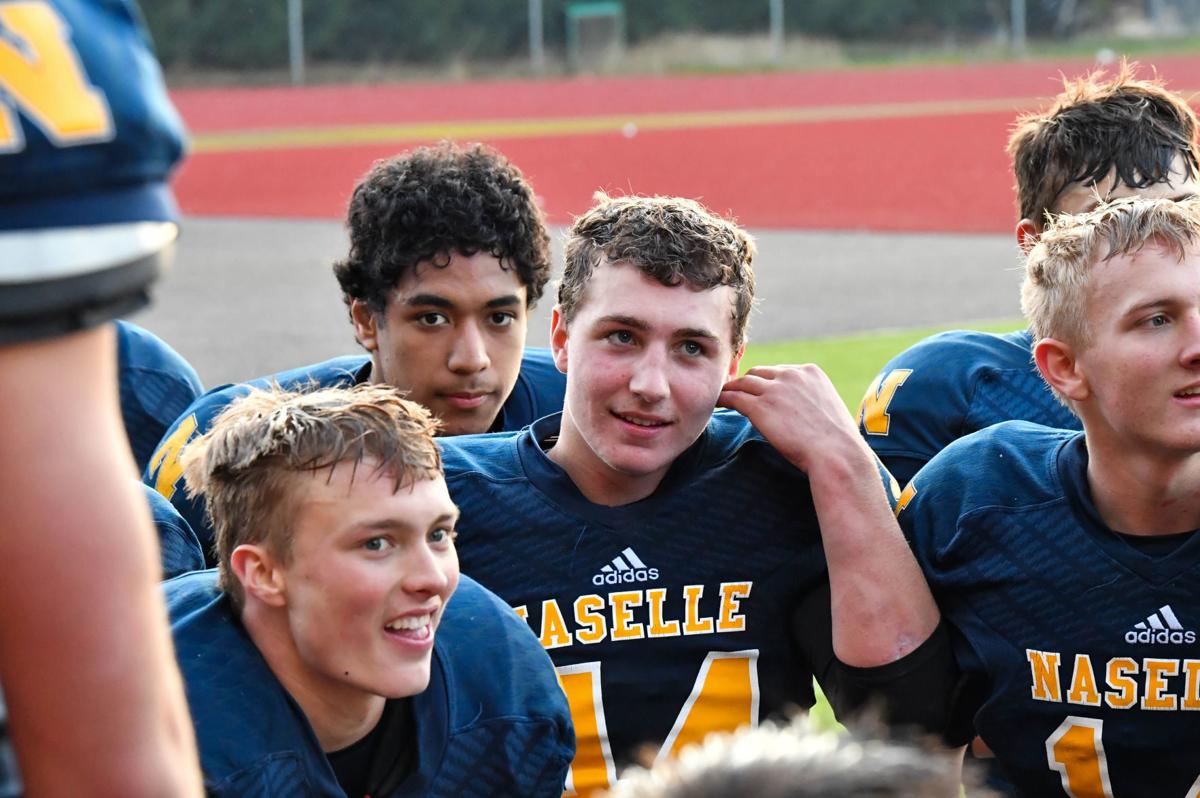 The Comets smile while sitting in their post-game huddle after winning 70-44 against ACH. 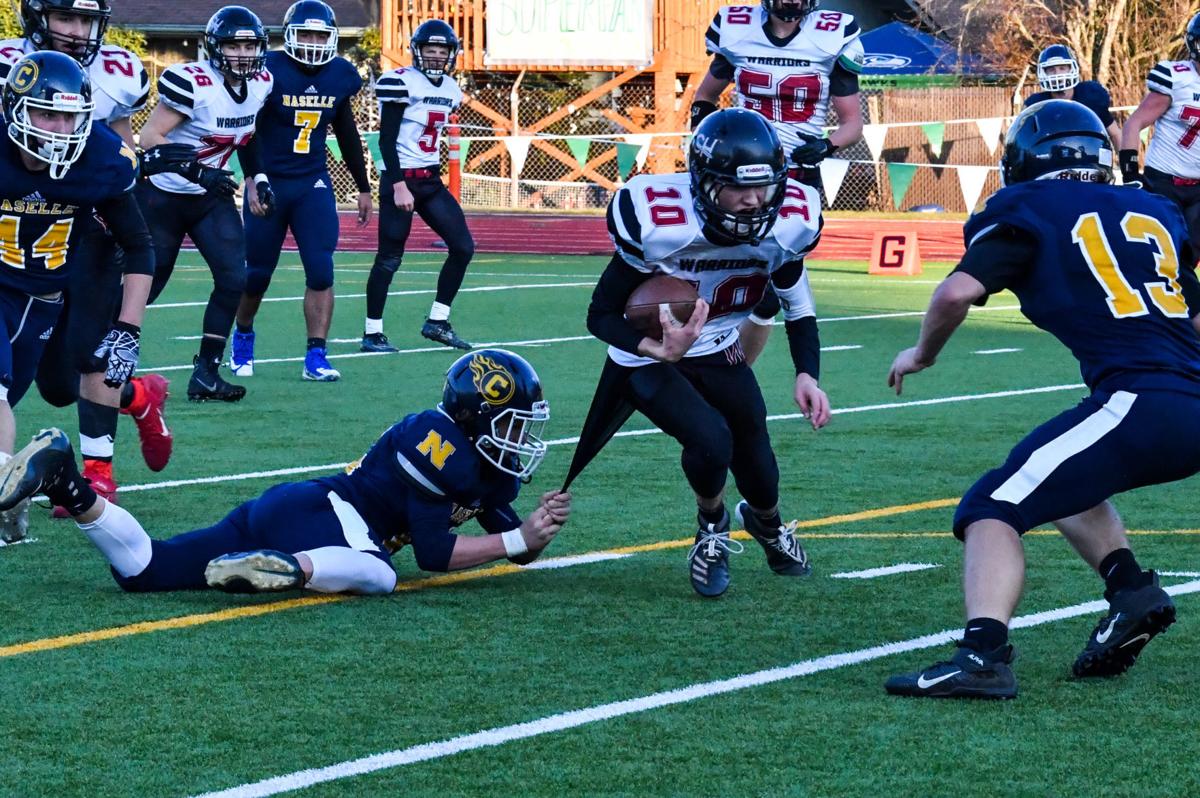 The Comets consistently dragged own the Warriors during their semifinal playoff game Saturday at 1 p.m. in Tumwater. 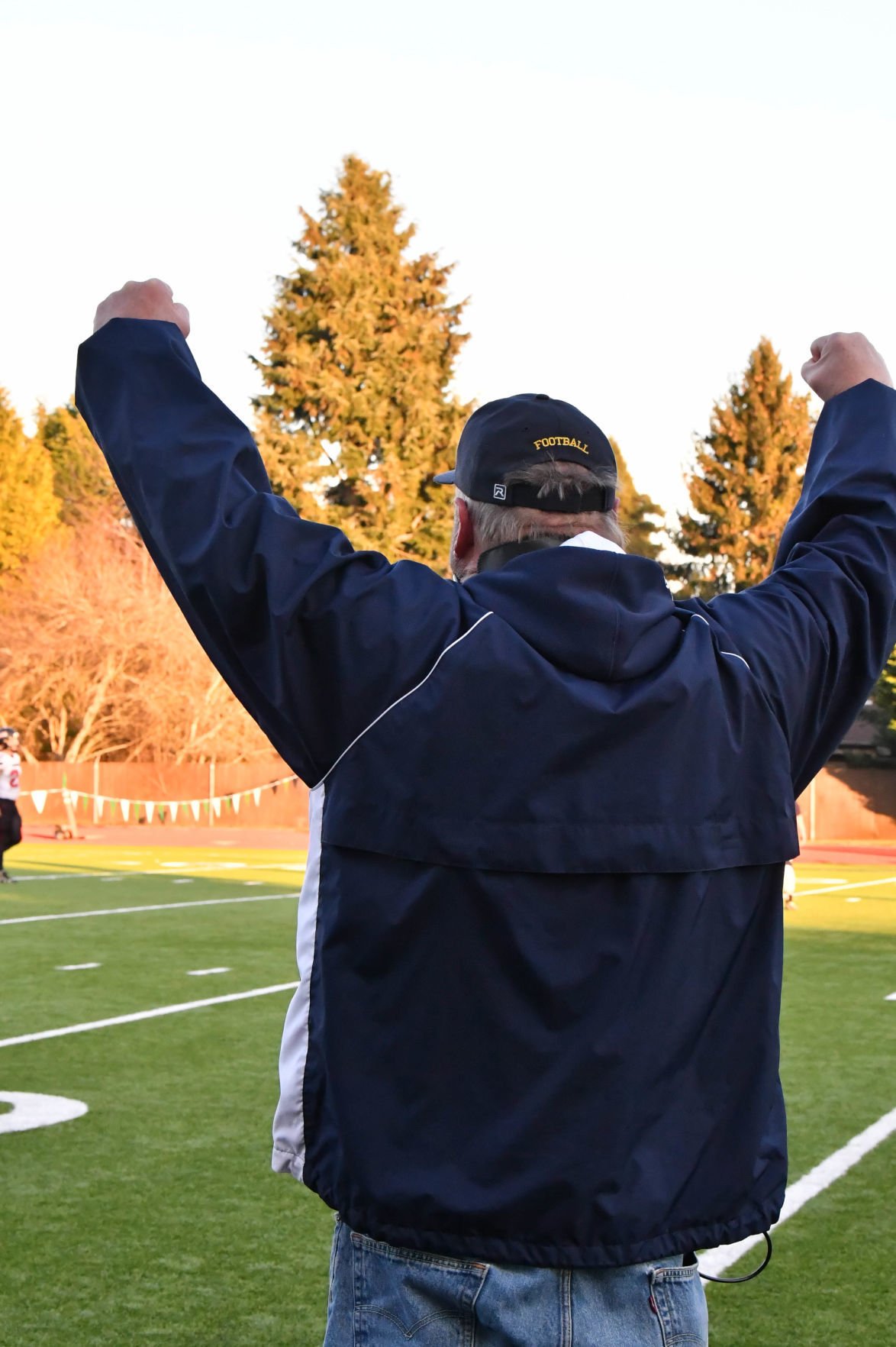 Naselle finally did it. After a three year shutout, the Comets are going to the state championships. Naselle pulled out a 70-44 win over Almira-Coulee-Hartline Saturday in Tumwater.

For the first time, the Comets are moving past quarterfinals and semifinals. Naselle came out of the door hungry for revenge.

Ethan Lindstrom started out strong and picked up his own kickoff, giving Naselle the ball first. But it was quickly turned over to ACH.

After ACH made it to the end zone first, Ethan came back a minute later and ran in the Comets’ first touchdown of the game. Jimmy Strange then waltzed it in for the 2-point conversion, tying up the game.

This was just the beginning of the wild game at Sid Otton field. Fa’aoso Tutu’u ran seven yards to the end zone and Joey Strange picked up the conversion. Naselle took the lead 16-8 with just a minute left in the first quarter.

And a battle it was.

Both teams racked up penalties and fumbles. But the big one came when Jimmy picked up ACH’s fumble on their 30 yard line. Then he ran 30 yards for another Comet touchdown. Joey ran in the conversion and widened the gap to 24-8.

“I didn’t think it was going to be a blowout; I thought it would be a close game,” Jimmy said.

Ethan said he didn’t think anyone expected the Comets to “kill them.”

But ACH didn’t give up. Right out of the start of the second quarter, ACH’s Brayton Schafer ran in a touchdown and Dane Isaak got the conversion. It didn’t help the Comets when Ethan’s pass was intercepted by Schafer who ran 50 yards for a touchdown.

“I was thinking the whole time we’re going to beat them. We need to beat them. They beat us, kicked us out three times,” Joey said.

Ethan played a big part in this battle. He consistently threw darts that ended in first downs and touchdowns. He zoomed one into Warren Wirkkala for a 24 yard touchdown. He then turned around and ran in the conversion, putting the Comets up 40-30.

“Ethan is just constant. He’s team leader on both sides of the ball. Fa’aoso stood out too, he ran hard today and with purpose. Joey Strange, all 140 pounds of him, he ended up with 83 yards and a touchdown,” coach Jeff Eaton said.

Working together is what made this win happen, Eaton said. That was proven true when Daniel Holt picked up a fumble on the 1 yard line, allowing Ethan to walk in the touchdown. Joey Strange then intercepted ACH’s pass and helped Tutu’u run it in for a 56 yard touchdown.

The Comets were up 52-30 at the end of the third and the boys were dancing on the sidelines, but Eaton was still nervous.

“I was still scared when they got it up to 20 points. They were just as tired as we were. When I went out to the defensive huddle they said, ‘yeah let’s finish them coach’ and I don’t need to say anything more,” Eaton said.

Tutu’u kept true to his word. He came back with a 23 yard touchdown. After the Warriors snuck into the end zone, Tutu’u carried it for 49 yards, securing a 64-38 lead.

“We got killed every year. This is the first time we beat them it feels pretty good. After the first play I knew we could stop them,” Jimmy said.

But ACH wasn’t done. Isaak tried to help the Warriors out with an 85 yard touchdown, but Tutu’u came back with a 34 yard run to the end zone.

“I was worried about them passing, they’re good at passing. But we just got to the quarterback really fast. We’re not done yet,” Kolten Lindstrom said.

The buzzer sounded with 70-44 on the board, announcing Naselle’s win. Tears fell as the Comets realized they made it to next week.

“I’m pretty thrilled right now. That hasn’t been done…this is the first state championship we’ve ever been to in a long time. Were pretty pumped. We’re doing it for the community, I mean just look up in the stands. It’s pretty filled. There’s nothing like it,” Ethan said.

It took Eaton 31 years to make it here. He said there’s no stopping now.

“I’m so excited for the boys,” Eaton said. “Now we get to go over the last hurdle and go to finals. We’ve never made the state championships in football. It was due.”

Ethan Lindstrom gets ready to pass.

Coach Jeff Eaton screams after a touch down.

Daniel Holt catches a pass and makes a touchdown run.

The Comets smile while sitting in their post-game huddle after winning 70-44 against ACH.

The Comets consistently dragged own the Warriors during their semifinal playoff game Saturday at 1 p.m. in Tumwater.