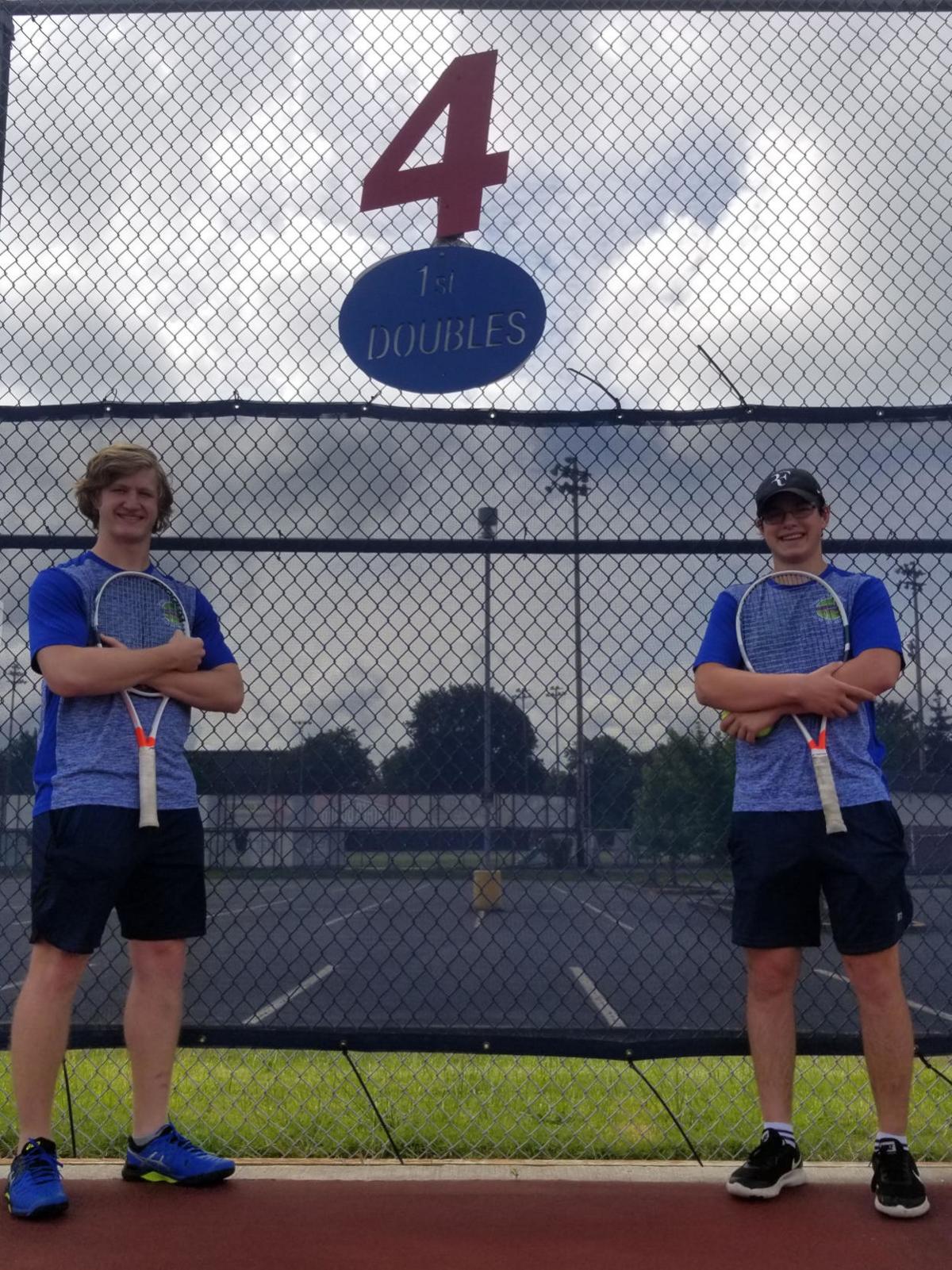 Ben Haukaas (left) and Gabe Slind pose for a photo on their favorite court. The doubles team won a State title in 2019 and haven't lost a match since 2018 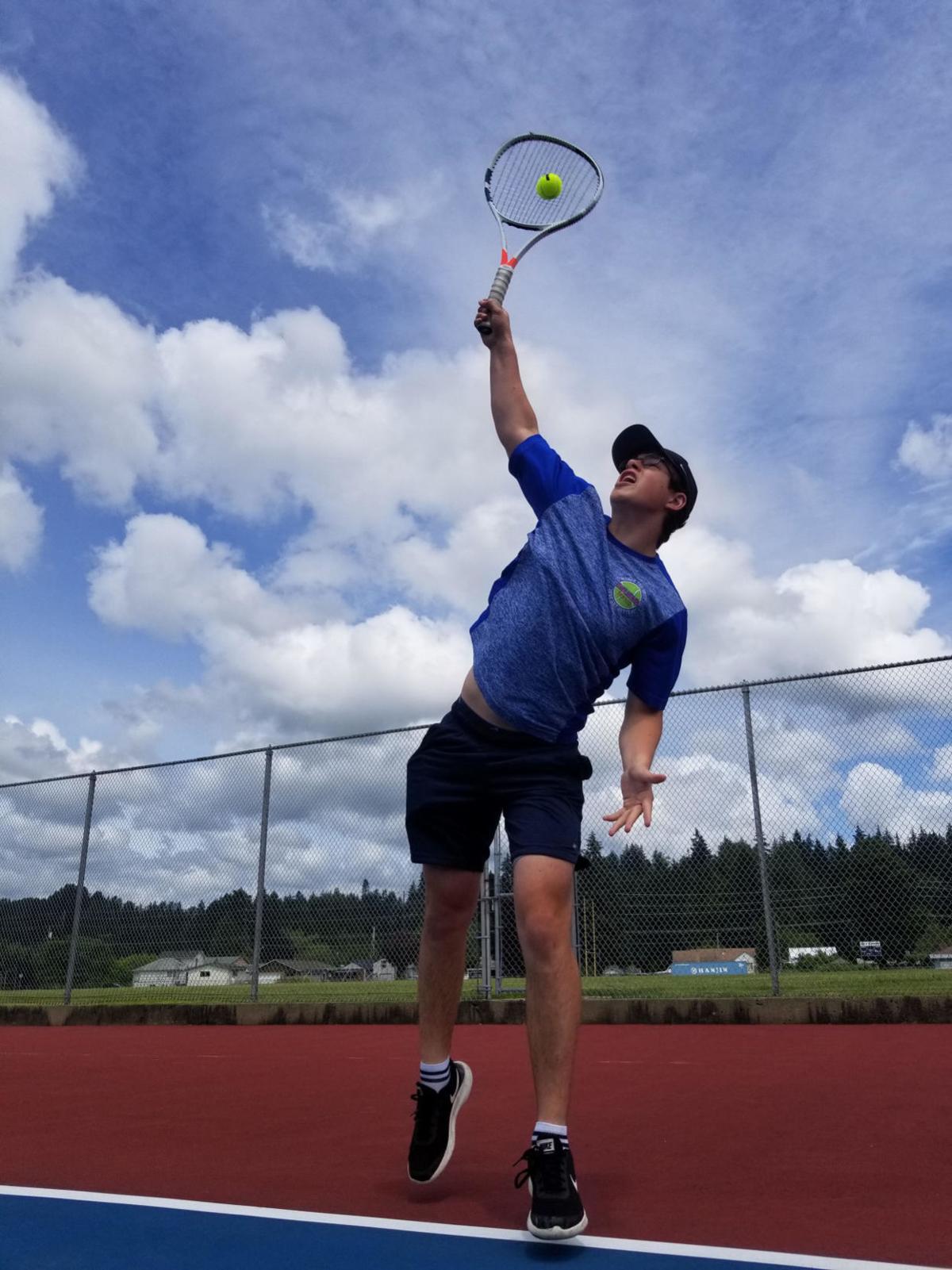 Gabe Slind, a senior from Mark Morris, serves on an empty court. 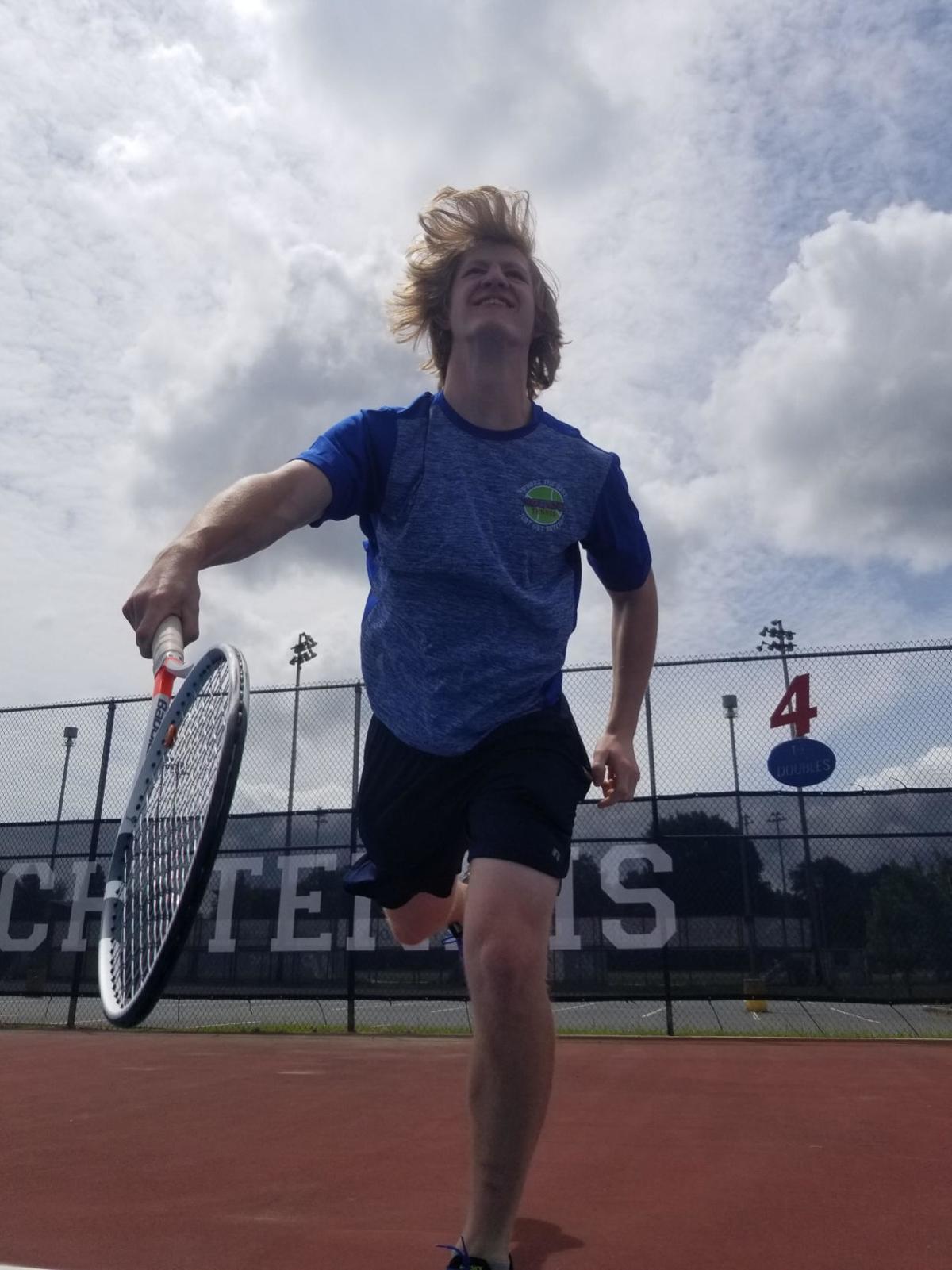 Ben Haukaas, a home schooled junior on the Monarch tennis team, follows through on a serve at Mark Morris.

Gabe Slind and Ben Haukaas had a good thing going. As doubles tennis partners at Mark Morris the duo haven’t lost a match since the 2017-2018 season.

The last loss on their resume came at the State tournament that year when they placed fourth as a freshman/sophomore duo. Then, last season that pair of Monarchs ran the table on their competition and finished with an undefeated State championship for their efforts.

As hard as it is to imagine, this season Slind and Haukaas were on pace for an even better season. The Monarchs record setting doubles team waltzed through their non-league, league, and District tournament slate in the fall without dropping a single set. That performance punched their ticket back to the State tournament where they were supposed to defend their title. All they had to do was wait out the winter months and hit the courts in stride again in spring when the weather, and everything else, starts to look a little better.

But this spring was unlike any other and the ancillary ramifications of the coronavirus pandemic did not skip the tennis court. As a result, Slind and Haukaas were forced to retire their rackets early and finish the season as perhaps the state’s first undefeated team to not win a title.

They are now the answer to a sports trivia question, just not in the way they would have preferred.

“They’d been working out all year long and, my gosh, I really thought it was going to be such a great tournament because everyone was going to be shooting for them,” Mark Morris tennis coach, Tom Johnson, said. “They were so ready and so focused, and then, nothing. I can’t imagine losing your senior year like the rest of the kids did.”

For Slind, a senior, the consequences of the lost spring season were especially disappointing. Next year he will begin attending the Naval Academy and his recreational racket time is bound to take a backseat to his nautical career ambitions.

“I think I would have been quite a bit more disappointed if we hadn’t won last year,” Slind said. “It felt good to get that State championship last year. I understand that they had to shut activities down but I did miss the atmosphere.”

While he was rocking the Columbia blue and red, though, tennis was always right up near the top of Slind’s priorities. He and Haukaas even took private lessons out at Mint Valley with private instructor Donnie Harlan in order to stay sharp out of season.

“We rely primarily on serve and volley style tactics, which is pretty aggressive. In order to do that you need a pretty good serve and Ben has a tremendous serve. It’s extremely powerful,” Slind explained. “He can also spin it and a lot of guys can’t handle that.”

Still, Slind had a hard time saying exactly what would have happened if he and his partner had been given another shot to show what they could do on the State stage.

“I think over the past year things really panned out for us. A lot of the teams that we’d played the year prior had graduated,” Slind noted. “With tennis it’s especially difficult because you don’t know who you’re going to be put up against.”

Haukaas, a junior, was a bit more forthcoming with his confidence. Next year the home schooled Ken-doll incarnate will switch to singles play and chase a solo title. However, he’s confident that if given the chance he and Slind would have wound up at the top of the doubles heap once again.

“We were hoping to be able to get that second straight State tournament. Gabe is an all-around good player. He’s really good at attacking the net,” Haukaas said.

Accordingly, much of that confidence can be attributed to the uncommon faith Haukaas has always had in Slind.

“He really keeps the team morale up and he’s been a very good teammate. He’s helped me out during practice and as a partner. He’s definitely been a friend and encouraged me to play better,” Haukaas added.

Looking back over their three seasons together coach Johnson recalled a series of thrilling matches against a stalwart Columbia River squad. Those showdowns included a stunning comeback during Haukaas’ freshman year that served to announce the duo’s dynamic presence with authority.

“You walk out there and they just dominate and people look at me and say, ‘Good job, Coach!’ But most of this is on them. They work real hard,” Johnson said.

The Monarchs’ coach noted that both Slind and Haukaas seemed to grow a few inches and put on some power weight that would only have helped them in their title defense. For Johnson, it wasn’t so much a matter of “if” his players would repeat as State champions, but exactly how thoroughly they could dominate.

“They’ve been working at tennis and growing and getting stronger. I have no doubt in my mind that we would have been heavy favorites. I was so confident that I bought them State championship T-shirts already,” Johnson said. “They would have crossed a threshold that would have enshrined them forever. So that kind of hurts to take that away from them. Lots of things were stolen from these kids.”

Ben Haukaas (left) and Gabe Slind pose for a photo on their favorite court. The doubles team won a State title in 2019 and haven't lost a match since 2018

Gabe Slind, a senior from Mark Morris, serves on an empty court.

Ben Haukaas, a home schooled junior on the Monarch tennis team, follows through on a serve at Mark Morris.