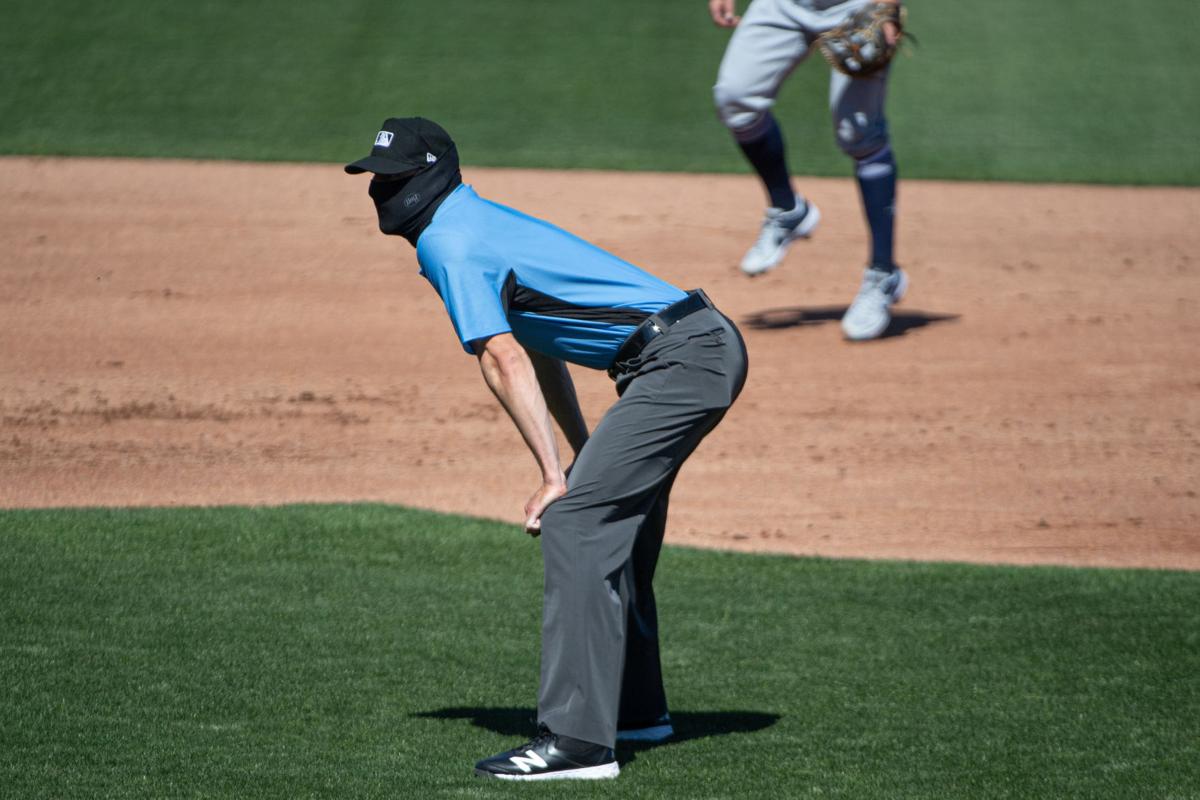 Kyle McCrady leans in for a pitch during a Seattle Mariners Taxi Squad game at Chaney Stadium in Tacoma on Wednesday. McCrady was called up on Thursday to work the Mariners series against visiting Texas. 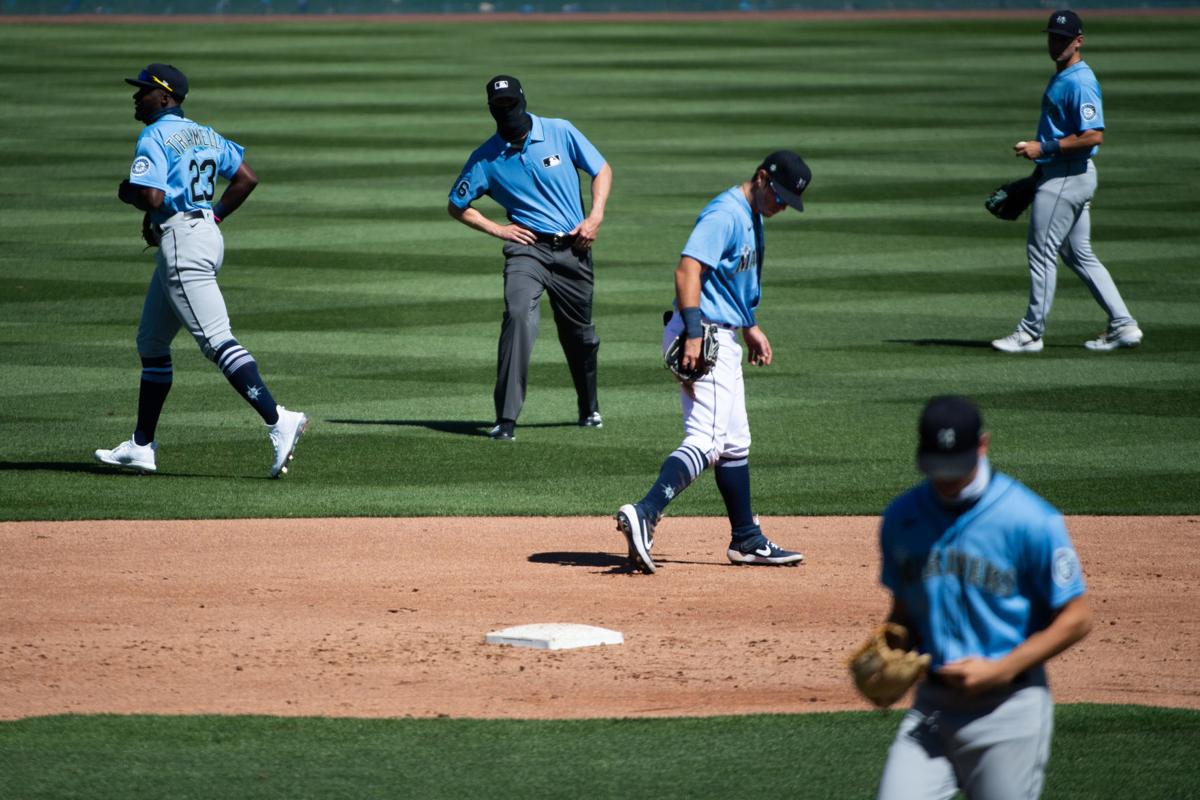 Kyle McCrady stretches between artificial "innings" during the Seattle Mariners' Taxi Squad game at Cheney Stadium in Tacoma on Wednesday. Thursday, McCrady learned he will work a Big League series in Seattle over the weekend. 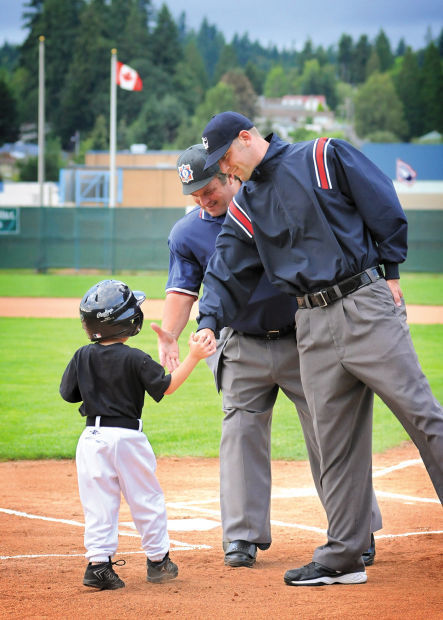 After years of toiling away in the minor leagues, enduring long road trips, sweltering heat, minimal pay and a seemingly insurmountable ladder stretching to the heavens, the call finally came.

Kyle McCrady, a Longview native, is now an umpire in Major League Baseball after receiving the call-up on Thursday. He will work the weekend cut in series in Seattle between the Mariners and the visiting Texas Rangers after spending the first part of this season in Tacoma at Seattle’s alternate training site.

It wasn’t the clean “You’re going to the Big Leagues” story that is often told.

A week ago, McCrady got a call telling him to be ready for the Oakland at Seattle series earlier this week. But after an Oakland staffer tested positive for COVID-19, the entire four-game series with the A’s was postponed and McCrady’s impending call-up evaporated before it even materialized.

Skip ahead a week, and that opportunity finally solidified.

“It’s been kind of like an up-and-down week because I got the call expecting to go up, and everything happened with what went down with the A’s, and then they (postponed) that series,” McCrady said. “It was kind of a disappointment. Then I got the call. I wasn’t really expecting the call (Thursday).”

McCrady, 31, is a product of the local baseball fields, both as a player and umpire. The son of former Longview mayor Mark McCrady, Kyle excelled through the youth ranks at the Western Cal Ripken and then Longview Babe Ruth leagues. Then he embarked on a stellar high school career at Mark Morris, which ultimately landed him a spot in Kelly Smith’s outfield at Lower Columbia College.

While playing at LCC in 2008-09, McCrady earned extra cash on the side, working as an arbiter for youth games in the area. It’s not an uncommon gig for Red Devils players to pick up.

In 2010, he worked a total of 33 games as a member of the Lower Columbia Umpire Association (LCUA), at the Cal Ripken and Babe Ruth levels.

Three years after that, with his playing career now firmly behind him, McCrady received a suggestion that changed everything.

A fellow umpire told McCrady he should go to the Umpire Training Academy in Vero Beach, Florida. That’s where MLB goes to find the best umpires. Since its inception in 1998, 62 umpires have been hired full-time after development at the school.

That part of McCrady’s trip to the show began seven years ago, in the winter of 2013. And now, finally, McCrady has reached the pinnacle, even if it’s as a call-up to start.

“From the start, you could see he was a natural,” LCUA Board Member Dave Andrew said. “Since then, he’s worked his way up through going to the school, (single-A) ball and all the way up. What a testimony to his hard work. It’s kind of where being really good at something and hard work comes together. And it’s paying off.”

According to Major League Baseball, there are only 92 umpires listed as working at the highest level. That number might be different this season, as several older umpires opted out of the 2020 season due to heath concerns surrounding the COVID-19 pandemic and the altered season format.

Even so, McCrady was already within shouting distance of The Show.

During regular Spring Training in February and March, McCrady was on a 31-person list of potential call-ups with 23 guys ahead of him. That’s where he remained at the beginning of Summer Camp — baseball’s truncated tune-up in June — before receiving the call he’d been waiting for.

As the news spread Thursday around the local baseball community, well-wishers used various platforms to celebrate the achievement. Some got to McCrady directly. It was obviously a community-wide feeling.

And it’s no different for McCrady. Through his entire professional career, he’s maintained that he’s not special, that this isn’t about him. It’s about the community he came from.

As the reality of a dream accomplished seemingly sank in, McCrady became emotional over the phone, pausing at times to collect his emotions and his thoughts. When he spoke, it was measured, careful, not unlike an umpire might think before making a pivotal call.

“It’s almost like to give that opportunity away to other people,” he said. “I don’t know. It’s not about me. It is, but at the same time, for other people to enjoy it, it’s significant, man. I’m excited other people are excited.”

M's knocking on the door

It seems like it’s been forever since the Mariners had a legitimately good team. The kind of team you can recognize instantly by using only a …

The next collegiate win for the Red Devils’ new women’s soccer coach will be his first, but acting like he’s been there before shouldn’t be an issue.

If baseball happens and nobody's there, does anyone win?

As we sat through successive red and green lights and waited for trains to pass by in the crowded SoDo district of Seattle on Wednesday, sport…

Kyle McCrady leans in for a pitch during a Seattle Mariners Taxi Squad game at Chaney Stadium in Tacoma on Wednesday. McCrady was called up on Thursday to work the Mariners series against visiting Texas.

Kyle McCrady stretches between artificial "innings" during the Seattle Mariners' Taxi Squad game at Cheney Stadium in Tacoma on Wednesday. Thursday, McCrady learned he will work a Big League series in Seattle over the weekend.