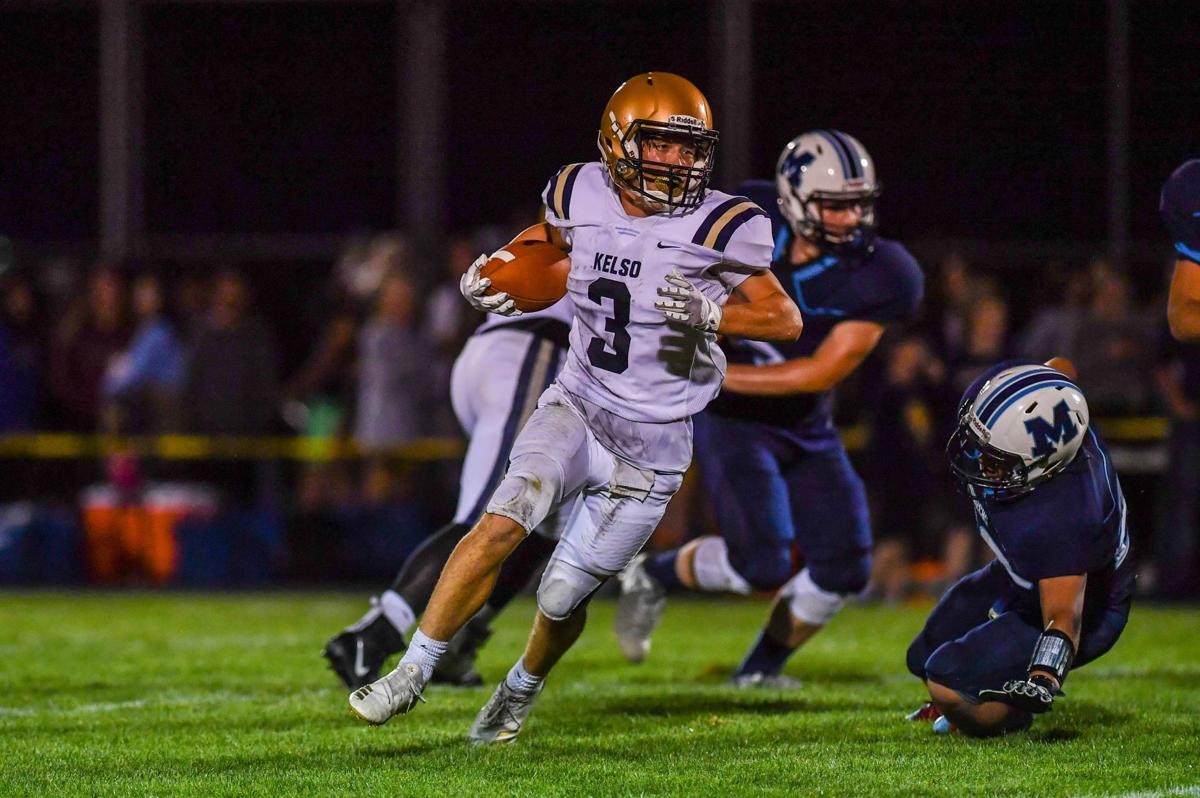 Kelso Freshman Conner Noah, 3, make a break for it as Mark Morris players try to catch up but falls behind. 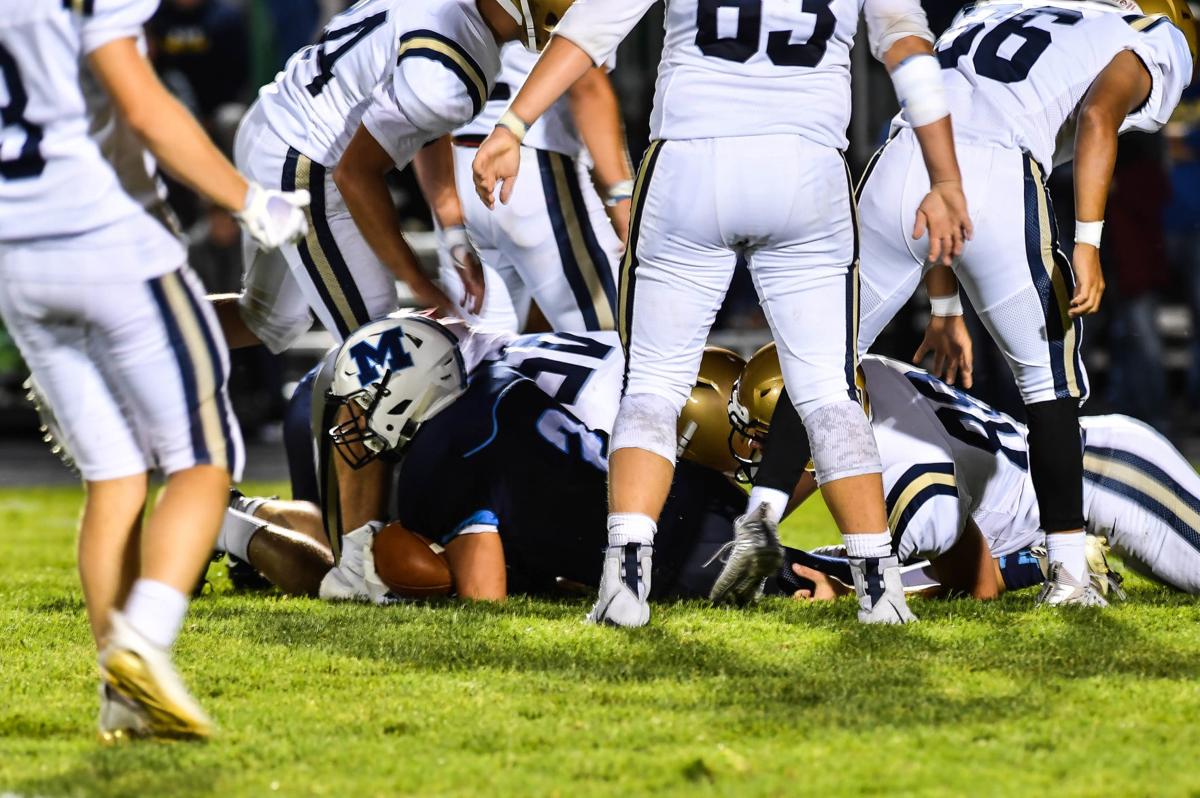 In one of the few times the Monarchs had the ball, their player held on while being surrounded by Kelso Highlanders.

Kelso’s shortest road game of the year was a success.

Despite the loss of starting quarterback Marshall Coleman in the first quarter, Kelso got solid performances from both its backups in a 48-0 drubbing of Mark Morris at Longview Memorial Stadium.

“To have the mentality stay with the shutout is really good,” Steve Amrine said after his bench finished the clean sheet with the running clock. “It teaches the other guys that we’re gonna continue to play hard regardless. We really wanted to come over and do a good job. I was really happy.”

Normally losing the top signal caller in the first quarter is not good, especially when he is putting up numbers.

He was 2-for-2 passing for 45 yards and a touchdown on a perfectly thrown ball to Nick Miller, and also had 48 yards rushing on just seven attempts.

But a collision on the Kelso sideline after a 14-yard run force the Hilanders to call timeout and insert backup Colby Cooper, a sophomore.

“I was really happy with the backup quarterbacks,” Amrine said. “Marshall will be fine. He’ll be fine. Precautionary stuff.”

The Kelso offense didn’t miss a beat. Cooper threw for 35 yards on 2-of-4 passing and fellow sophomore Hunter Leteer went 1-of-2 for nine yards and a score.

In total, Kelso was 5-of-8 passing for 89 yards with three touchdowns, with all three quarterbacks tossing a score.

While it might not have been the plan to get so much playing time from the backup QBs — they likely would have played some but not three-plus quarters — it was an ideal time, in the end, for them to play and get game reps.

“Handled the ball and got after ‘em,” Amrine said.

“They get their reps in practice and are making the most of it,” Josh Webb said.

Perhaps, though, the star for Kelso was senior running back Webb.

The senior rushed for 58 yards on five carries with a touchdown, including a weaving 37-yard scamper in the first quarter that eventually set up his lone score, a two-yard plunge.

Amrine was pleased with the play of his entire backfield, one that rushed for 238 yards on 30 carries with four touchdowns. All four scores came from different players, with Webb, Cooper, Kyle Spaulding and Conner Noah all finding the end zone.

“We’re still young in so many spots and young in terms of playing time and all that fun stuff,” Amrine said.

It could not be more different, though, on the other sideline.

Inconsistency plagued the Monarchs all night.

Mark Morris quarterback Cole Busch wondered if his team’s first three drives of the night were stitched together what kind of results it would have.

Instead, Mark Morris went punt, fumble, punt in its first three possessions with a Kelso pooch kickoff that the Monarchs failed to recover mixed in.

It was a disastrous start and one from which the Monarchs could never recover.

“It makes it tough,” Monarchs coach Shawn Perkins said. “They battled. They fought the whole time.”

But, still, there were bright spots.

Busch look solid passing at times, though he was just 7-of-17 for 89 yards and two interceptions. He connected with Jack Shipley on a slant pattern in the first drive, but that quickly went away as Kelso adjusted its coverage.

Mark Morris also coughed up the ball three times and lost it twice, once in Kelso territory and once on a put. Kelso scored off both the turnovers and the pooch kick.

But, as Perkins pointed out to his team, there is lots of time left.

Mark Morris visits Castle Rock next week, which is an opportunity get its ship righted after a frustrating and disappointing debut.

Kelso Golf: Young Lassies looking forward to a mulligan in 2021

There was supposed to be a young and up-and-coming track and field team at R.A. Long this season, but that promising future never came true.

Kelso Freshman Conner Noah, 3, make a break for it as Mark Morris players try to catch up but falls behind.

In one of the few times the Monarchs had the ball, their player held on while being surrounded by Kelso Highlanders.