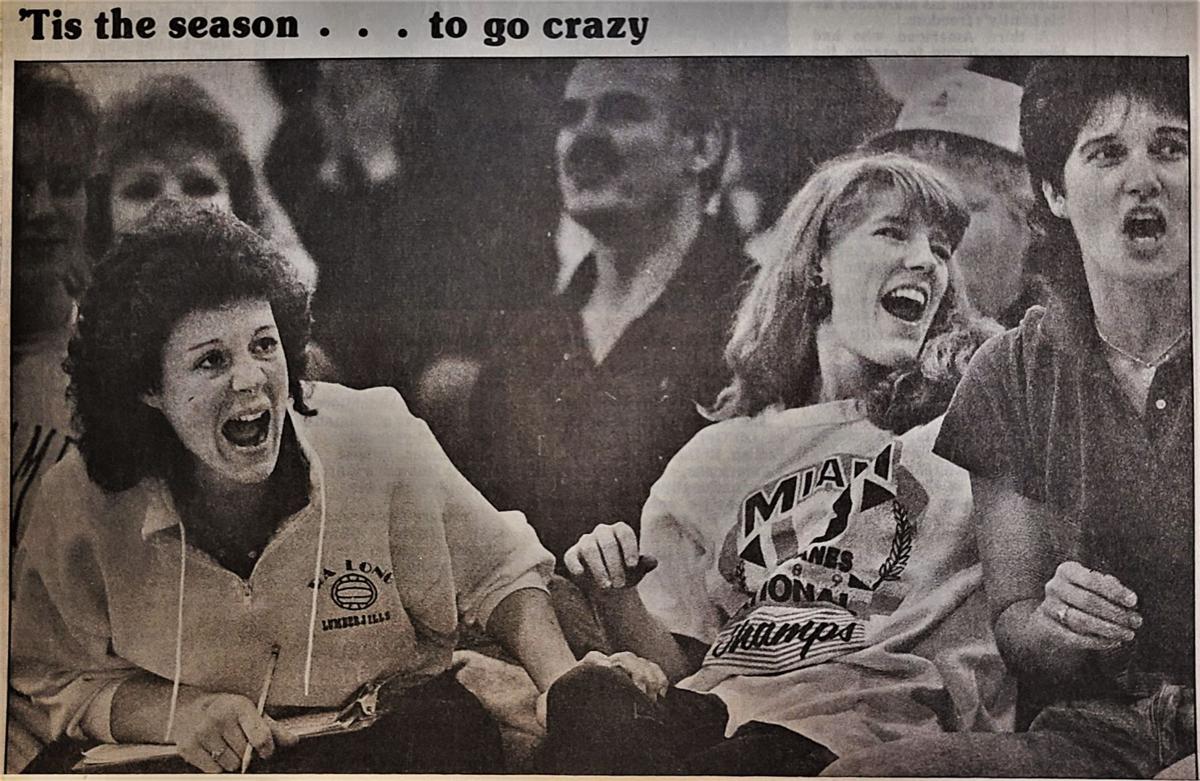 R.A. Long volleyball coaches (from left) Cindy Roxbury, Danica Logan and Jackie Slechta react on the bench during a game played on Nov. 10, 1990. 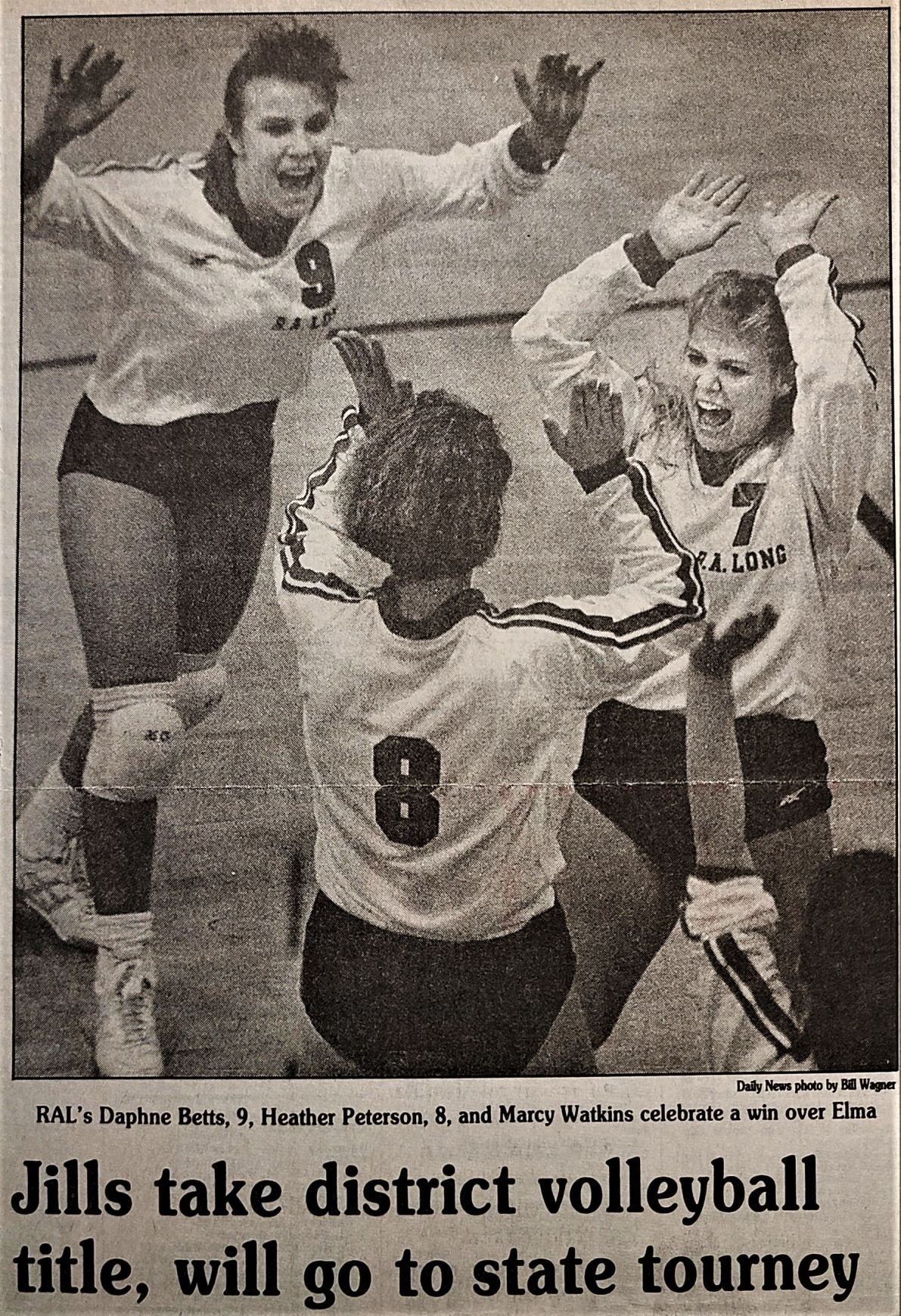 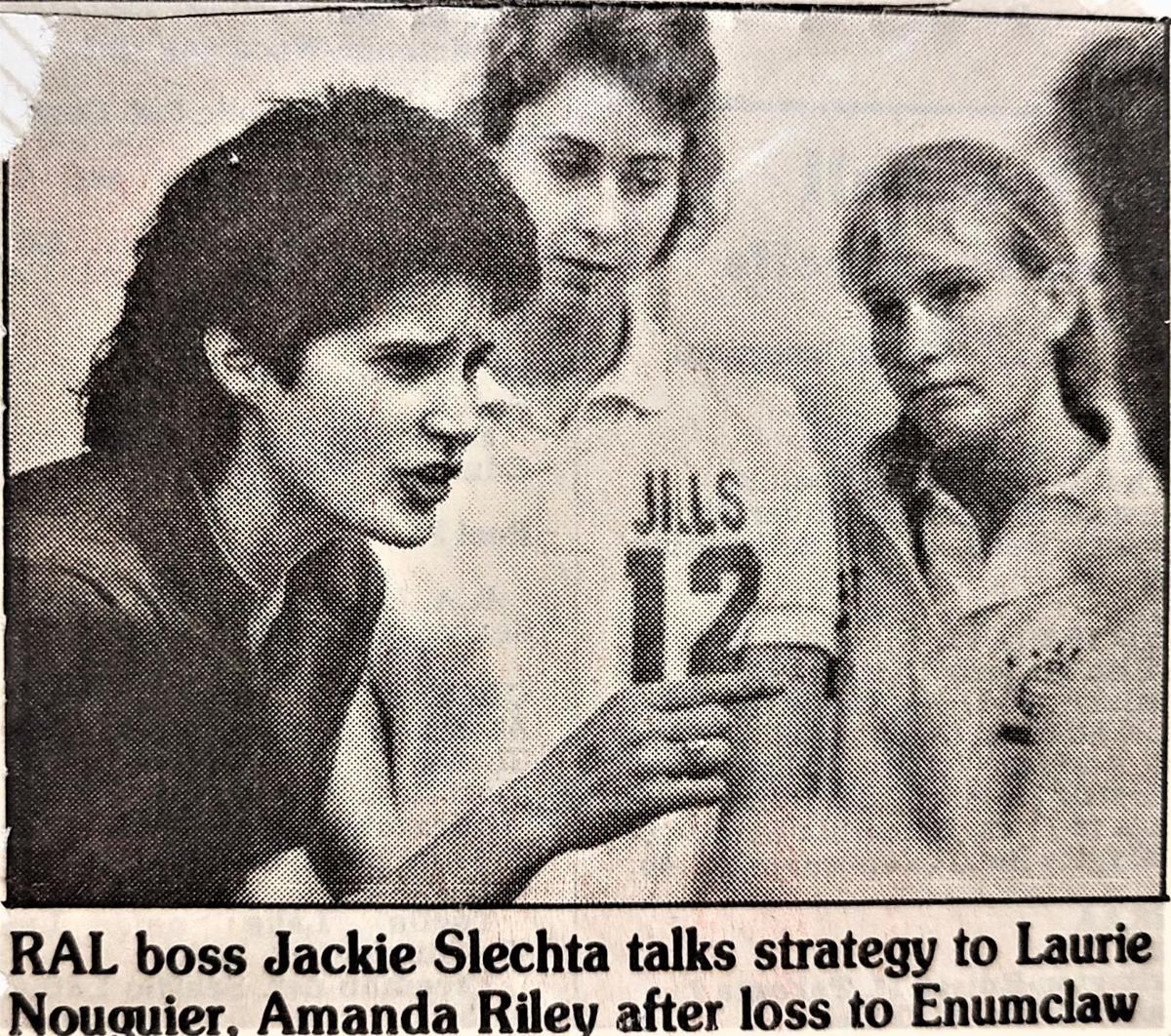 Head coach Jackie Slechta delivers some words of encouragement to the R.A. Long volleyball team following a loss to Enunclaw in 1990. 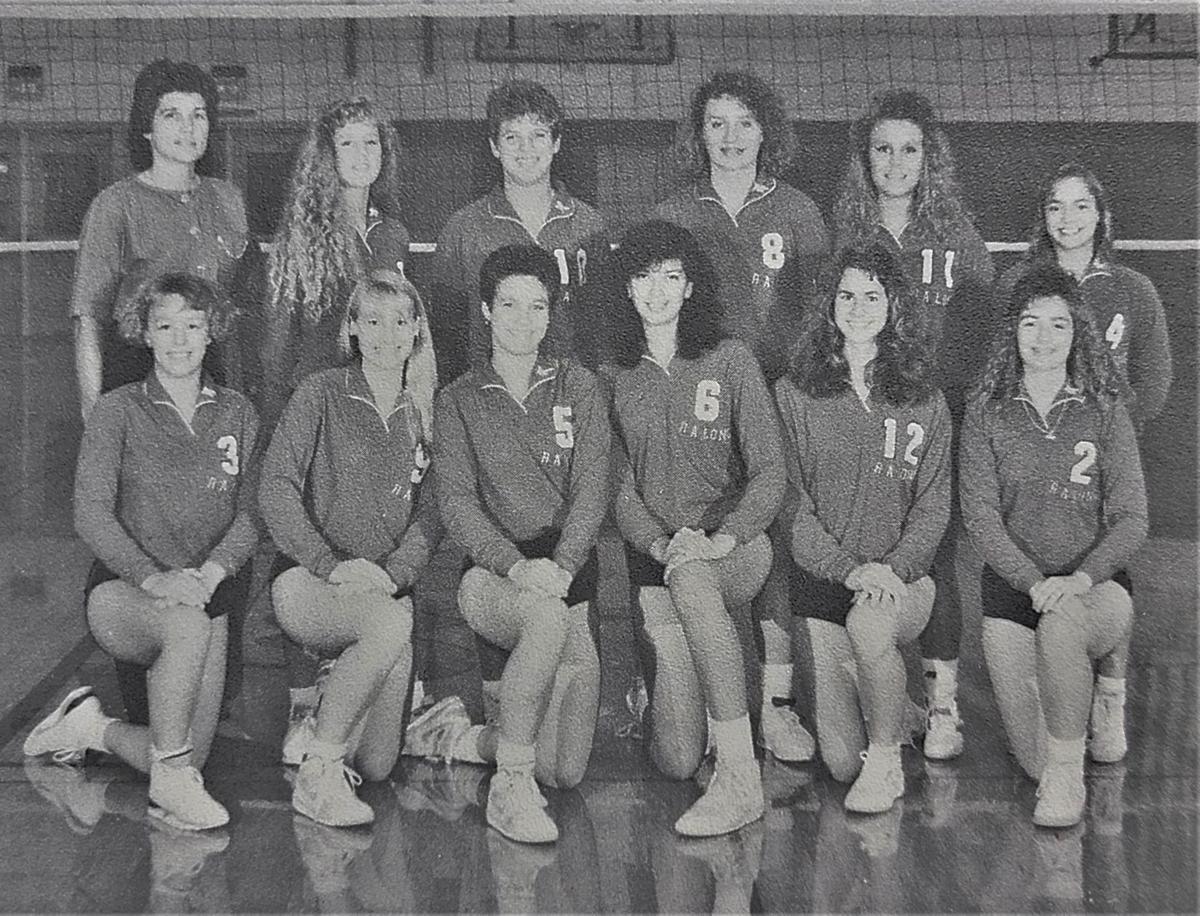 Jackie Slechta wasn’t afraid to tinker, to try new things, to see what works, and she had the confidence of her players to do so.

By not coming in and changing everything right away in her first year as head coach of R.A. Long volleyball, she earned herself leeway to make various changes here or there. But it was never in a top-down, authoritarian way. It was largely democratic.

“I think we all really trusted Jackie and it was a fresh start for a lot of us,” Deanna Piper said. “We really had faith in her.”

So when a drastic lineup change occurred before an Oct. 12 (1990) match against Battle Ground, nobody flinched.

The Jills simply took the court and started a hot streak that delivered them from a 4-4 record and newfound fears of missing the postseason all the way to State champ favorites.

Funny thing is, Slechta wrote that line-up down wrong. She had transposed two numbers on her roster she submitted to the first referee.

At that time, there were a very limited number of substitutions a volleyball team could make, so fixing the mistake initially was out of the question. It would have put the Jills at a huge disadvantage right out the gate.

So Slechta rolled with it.

Nobody remembers now which player was taken off the floor and who got the fortuitous start. It’s a fuzzy detail from that season to remember now. Maybe because back then nobody seemed too fazed by the change because they had already learned to trust their coach.

“I think she just came across as she trusted us or respected us,” Piper said. “It wasn’t from a condescending ‘I’m the authority.’ She took our input and kinda knew that we had been working together a lot already. She was pretty excited and always upbeat like, ‘Hey, I have this new idea what do you guys think of this?’”

And what do you know? It worked.

In the aftermath of the last minute lineup change, Heather Peterson took charge in the middle. Everything else was fouled up a bit as girls were playing roles they weren’t used to, but Peterson never missed a beat. She talked and pointed and pushed and taught and pulled her team together.

Slechta made the lucky mistake and is ultimately responsible. But it was Peterson who made it happen.

An experienced setter, Peterson credits her experience as a setter, and the bond between her teammates, for the successful transition that night.

“As a setter you always know where your players are supposed to be. You always know who’s in front of you, who’s behind you, who’s diagonal from you. You know mentally in your head. You’re keeping track of the rotation,” Peterson said. “So I just remember telling everyone, ‘Okay, you’re opposite of me so go to right back, go here on defense.’ We were so close with each other that some of the times there was a lot of pushing each other like, ‘No, you’re supposed to be over there.’ Not meanly, but ‘No, I’m here you’re over there.’”

While the Jills didn’t necessarily have a superstar standout among them — Mandy Wean and Stephanie Trevino might’ve been the closest to that — most of them had been playing together in some form or fashion for the majority of their lives. Along the way they had played for other good coaches from the area like Bill Marshall and Marcia Caneff, among others.

They were smart players who understood the game. And they were well-rounded players who could play just about anywhere on the floor.

So when the lineup change occurred and Peterson started moving everyone around, there wasn’t much more communication that had to be done. If Peterson pushed you there, that’s where you were supposed to be. It was no more complicated than that.

“Heather Peterson — amazing setter, tall, good hitter, bright girl, senior, very much a team leader — usually I’d start her in the back row. Play across the back for defense and then come out the other side and go in,” Slechta said. “And the place I put her, for some reason, she started on the front row. She had to play across the front. She did such a great job with her own hitting and blocking I thought, ‘Okay, we don’t have any loss.’

“She just clicked and took over everything and started running that floor like a general. And so she never came out of the game.”

That first set against the Tigers, the Jills won 15-3 with a new lineup and a bit of initial confusion. Then won the next two games to secure the sweep.

That lineup mistake started a league winning streak that ran all the way through the District tournament. The run of successive set victories paused only briefly at a 3A school tournament in Yakima, one of which was in the championship game to host Eisenhower.

While the new look Jills steamrolled through their 2A Greater St. Helens League foes they kept the lineup that should never have been and rode it for all it was worth.

Even in 1990, before the onset of the internet and smartphones and before video games and computers had become ubiquitous, there were still plenty of distractions for teens after school. Still, the Lumberdome was filled every night the Jills played there that season. It was an electric atmosphere as only the short-roofed building, a product of New Deal construction, can provide.

But it was about to get even crazier.

“Nobody wanted to miss out,” Angie Wean said. “It was like FOMO (Fear Of Missing Out) before FOMO was even a thing.”

As the Jills kept winning, the crowds got bigger. More and more students filtered into the wooden bleachers. That influx was led by the football team.

First-year gridiron coach Chris Fritsch made it a requirement that football players attend the volleyball matches. They all come to Friday night contests, he figured, so the favor should be returned.

Initially, the move was met with some eye rolls and shrugs. It was like another class, another practice, another place to be that was a requirement and failure to adhere could could be met with punishment.

“He made them have a note if they couldn’t go to it,” Nicole Burkhardt said.

But, again, as the Jills won, the football players stopped coming out because they had to. Instead, they started coming because they wanted to. They couldn’t miss it. Nobody could.

“They made cheers, Burckhardt remembered. “Before you know it, they were on board.”

There were all kinds of themes and unifying measures. There was a lucky shirt that was cut up and distributed to the players, each of them getting a piece of the magic that had somehow become imbedded to the processed cotton.

That relationship between the fans and players, always connective in some regard, became symbiotic in the most meaningful way. The fans gave emotion and motivation, the players gave a reason to be proud. It was a connective tissue that united everyone with a tie to the school.

What started out as “Yawn, talk to me in the playoffs,” quickly turned into, “Are you going to the game tonight? And if not, why not?”

“One thing I loved about being on the team (is) that was a show about reciprocity,” Angie Wean said. “For high school kids to have that, I think was really awesome because we would support the football team in their efforts and what they were doing. It was reciprocal. It wasn’t just one way. And that was cool.”

R.A. Long fittingly clinched its league title against the rival Mark Morris Monarchs, once again sweeping aside an opponent that had no answers for Mandy Wean, Laurie Nouguier, Trevino and more.

The Jills were on an absolute roll and there was no sign that they would be stopping anytime soon.

*Editors note: This is the second story in a series detailing the 1990 championship volleyball season for the R.A. Long Lumberjills. The first story ran in the Nov. 8 issue of The Daily News.

Oregon prep sports back on pause

Put yourself in the shoes of a collection of high schoolers from Longview in the then-Podunk gymnasium at Renton High school back in 1990.

Signing deals with the Devils

The signing period for NWAC schools opened up on Nov. 1 and schools around the region have been busy restocking the cupboards before they ever…

WIAA Executive Director Mick Hoffman made an impassioned plea Thursday for the return of high school sports, even as the organization postpone…

Off and Running: Morris not flashy but solid in first UW start

According to senior tailback Sean McGrew, the University of Washington football team learned of the coaching staff’s decision to name Dylan Mo…

Another day, another change to the schedule. Such is life in 2020.

Hot start: Huskies run (and throw) all over Arizona

R.A. Long volleyball coaches (from left) Cindy Roxbury, Danica Logan and Jackie Slechta react on the bench during a game played on Nov. 10, 1990.

Head coach Jackie Slechta delivers some words of encouragement to the R.A. Long volleyball team following a loss to Enunclaw in 1990.