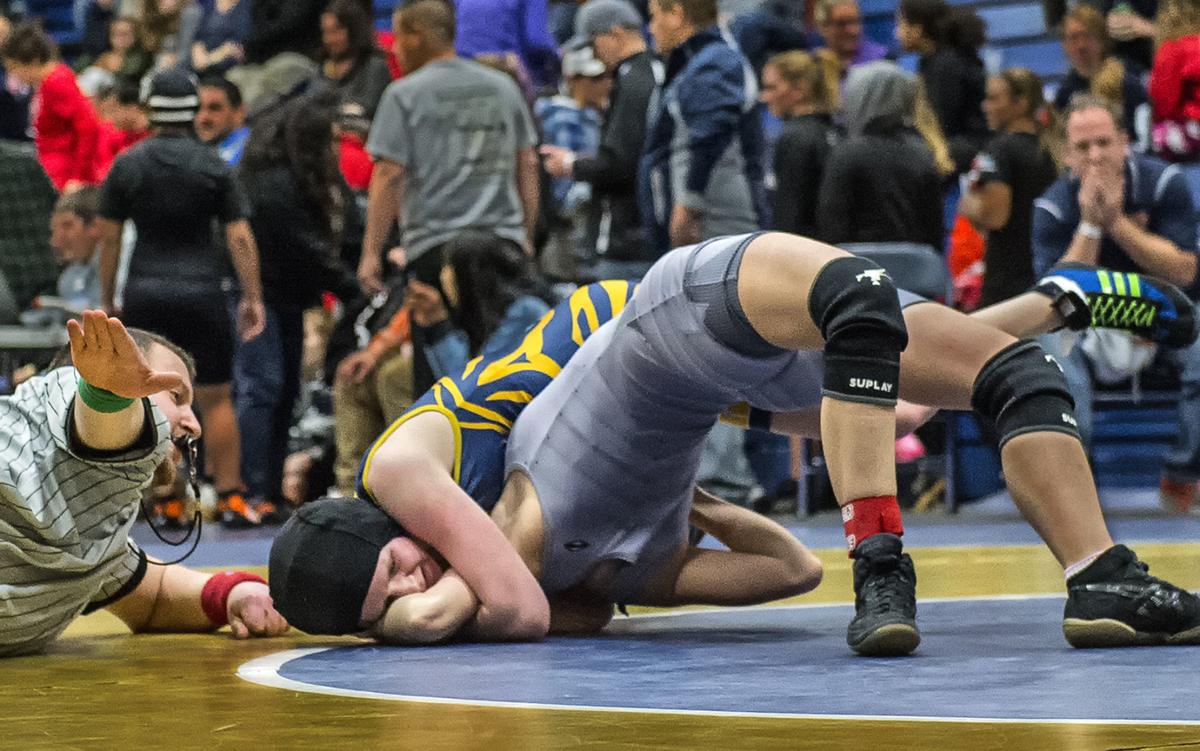 As hard as Lakes’ Sera Cook tried to arch, there was no denying Kelso’s Kyla Shoddy a pin in their 110-pound quarterfinal match at the Kelso Girls Invite. Shoddy went on to finish fourth in her weight class. 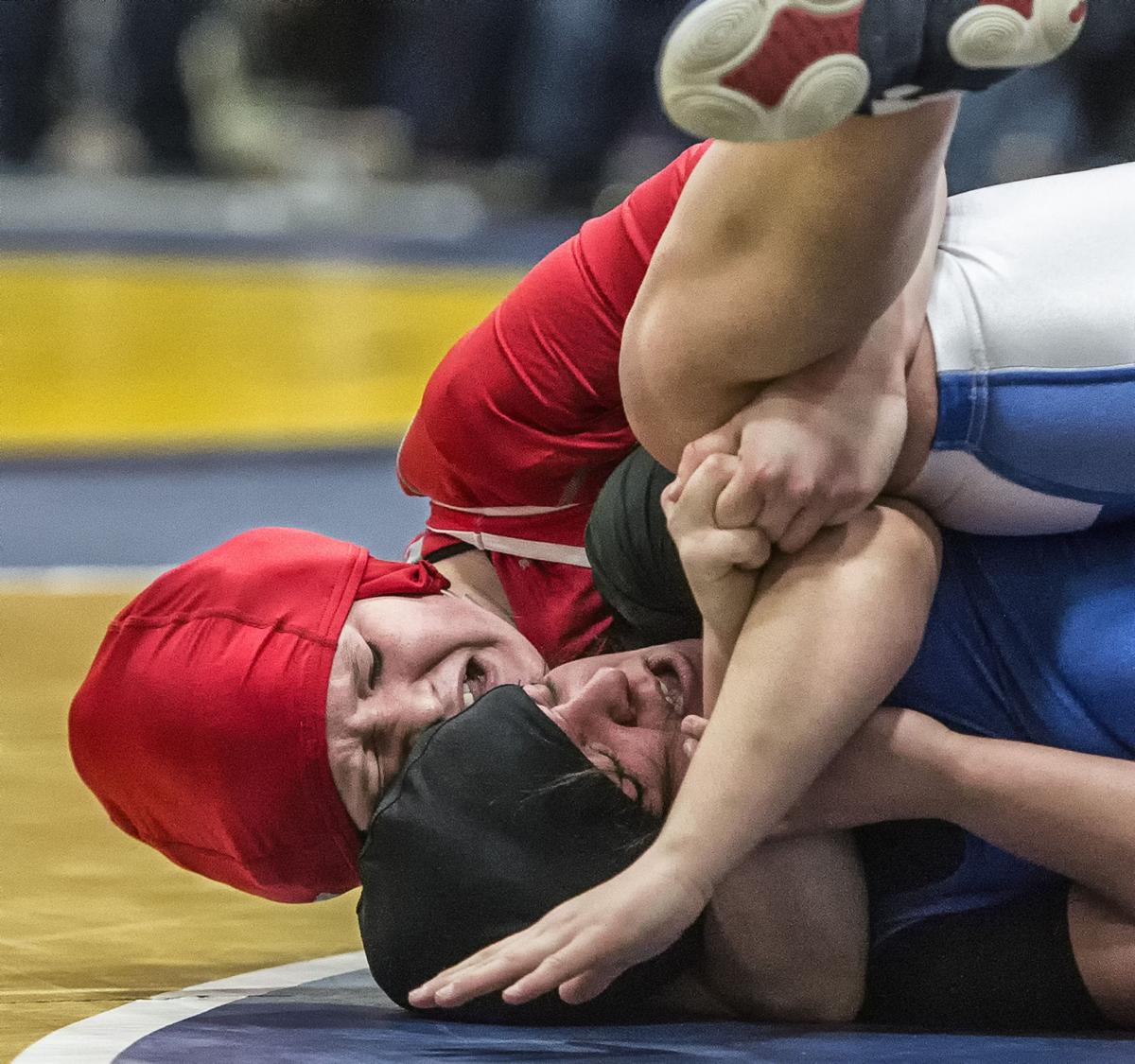 Castle Rock's Irelyn Gottschalk cradles Warden's Andrea Hernandez on the way to a 12-3 major decision and goes on to win their 145-pound consolation round match at Kelso. Gottschalk won two consolation matches Saturday and was one win away from a medal-round match.

As the Kelso Girls’ Wrestling Invitational approached its 10th year, Hilanders coach Bob Freund wanted an additional reward beyond a medal for those who placed. So he walked into Safeway looking to find roses to award to the winners.

To his delight, he stumbled upon an array of yellow — or rather, Kelso gold. Girls who placed in the top five were handed the roses.

The only Lassie to collect those Hilander-colored flowers was freshman Kyla Shoddy (110 pounds), who finished fourth after making the semifinals.

Kelso, Toledo/Winlock and Kalama each advanced two girls to quarterfinal contention but Shoddy and Toledo/Winlock’s Hannah Randall (145), who finished fifth, were the only locals to place in the top five.

Participants traveled from all corners of Washington, in addition to Oregon, Idaho and even Alaska but it was Yelm winning the event with 242 points. Othello and Sunnyside took second and third, respectively, and Kelso finished 12th with 74 points.

Shoddy defeated Lakes’ Sera Cook by first-round pin before falling to Warden’s Mariah Garza by major decision in the semifinals.

Toledo/Winlock’s Hannah Randall placed fifth after losing her first match of the day by way of pin in the quarterfinals before earning two pins herself and an injury default to finish on the podium.

“It just kept going from there and now it’s the largest in the Northwest,” said Freund, who is in his 26th year as the Kelso coach. “The brackets, the medals, the fact that the girls are featured in this tournament. It’s going to get better and better every year.”

This go-around an initial 73 teams and 480 total girls registered, but six schools backed out of the first and largest two-day tournament in the region due to weather concerns.

As the tournament continues grows, the field gets stronger and this year, the operations followed suit. Kelso installed Track Wrestling — a national tracking system used to score tournaments — for the first time, saying goodbye to bout sheets and going entirely electronic. The move included the addition of mat-side computers, gives each athlete a profile, and gives spectators live results online.

Ten years ago, Kelso and the rest of the region were devoting different resources to girls’ wrestling as the sport got its footing with females.

“We brought on a team, we brought on a staff to support the girls and we had girls in the school who wanted to participate,” Lassies coach Tyson Lindeman said.

“Kelso really took girls’ wrestling seriously,” he continued. “Fortunately we were successful with that, and that allowed us to start inviting teams and get a tournament together. … We had a lot of schools in Southwest Washington that took girls’ wrestling really seriously in the initial years, so we wanted to support that and build the tournament, so that’s where it really started.”

In 2014 there were 59 schools represented. Three years later the trajectory still points up.

“(We’re) really the first two-day tournament in all of girls’ wrestling that was even close to the Pacific Northwest, and it gave the girls an opportunity to compete on a Friday and Saturday,” Lindeman said. “A lot of the coaches and competitors like that, and it gives it some of that feel, so it’s drawn a lot tougher competition.”

The junior varsity boys is relegated to a sideshow with the continued growth of the girls’ side. Eventually, the girls may push the JV boys out completely.

“We’re probably eventually going to work ourselves out of the guys,” Freund said. “We’re right there anyways. Typically we have about 350 boys at the JV level. We’re running 11 mats. It’s manageable; we’ve got it dialed down. But there’s a point where we might have to just focus on the girls.”

For the better part three quarters, the Ocosta Wildcats seemed to be cruising toward a spot in the 2B District 4 Tournament, holding a comfort…

CLATSKANIE — The Clatskanie boys battled the entire night and forced overtime on 3-pointer at the buzzer, but they ultimately fell to Warrento…

High school sports teams are often referred to as one big family. But high school basketball really is a family affair for Clatskanie coach Jo…

CLATSKANIE — The Lady Tigers returned to first place in the Coastal Range League with a blowout 57-22 basketball victory at Warrenton Tuesday night.

It had been at least 10 years since the R.A. Long girls basketball team qualified for the district tournament.

For a team that won their game by 32 points, the Tigers walked off the court already knowing they had room to improve. After a slow, back and …

As hard as Lakes’ Sera Cook tried to arch, there was no denying Kelso’s Kyla Shoddy a pin in their 110-pound quarterfinal match at the Kelso Girls Invite. Shoddy went on to finish fourth in her weight class.

Castle Rock's Irelyn Gottschalk cradles Warden's Andrea Hernandez on the way to a 12-3 major decision and goes on to win their 145-pound consolation round match at Kelso. Gottschalk won two consolation matches Saturday and was one win away from a medal-round match.