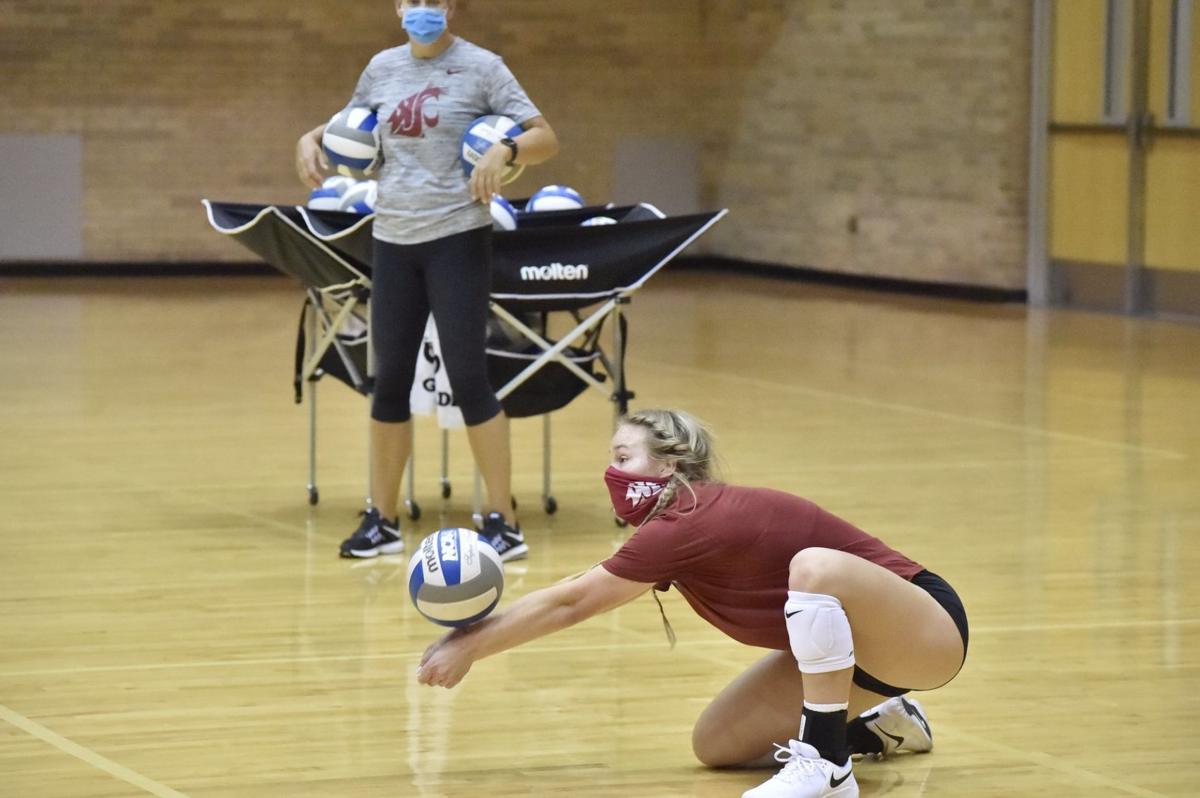 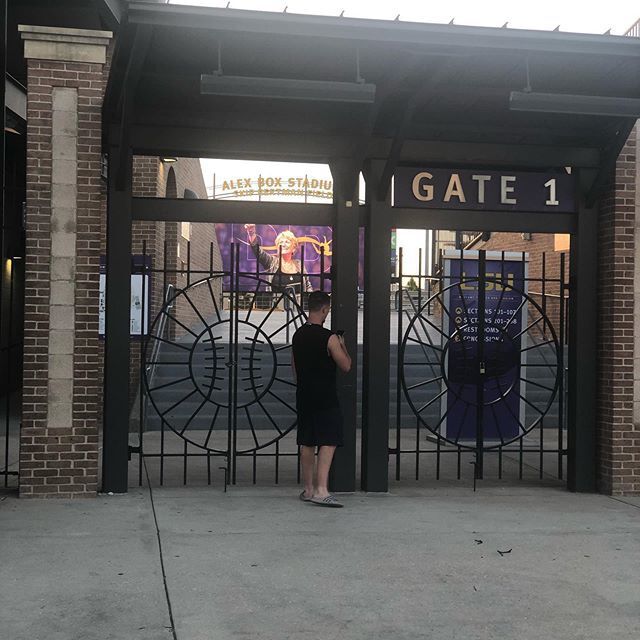 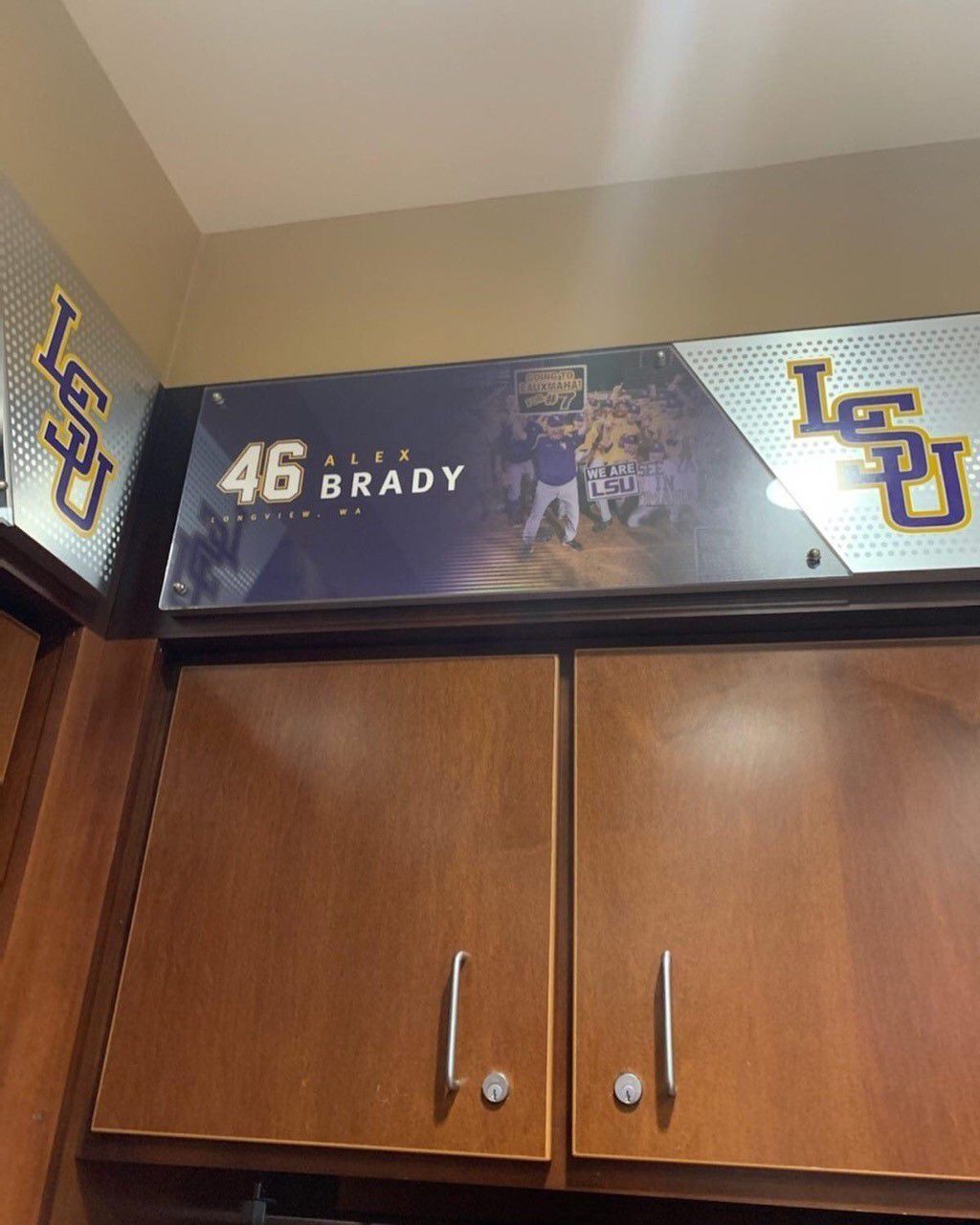 The locker of former R.A. Long standout, Alex Brady, is seen in the LSU Tigers baseball clubhouse earlier this month. 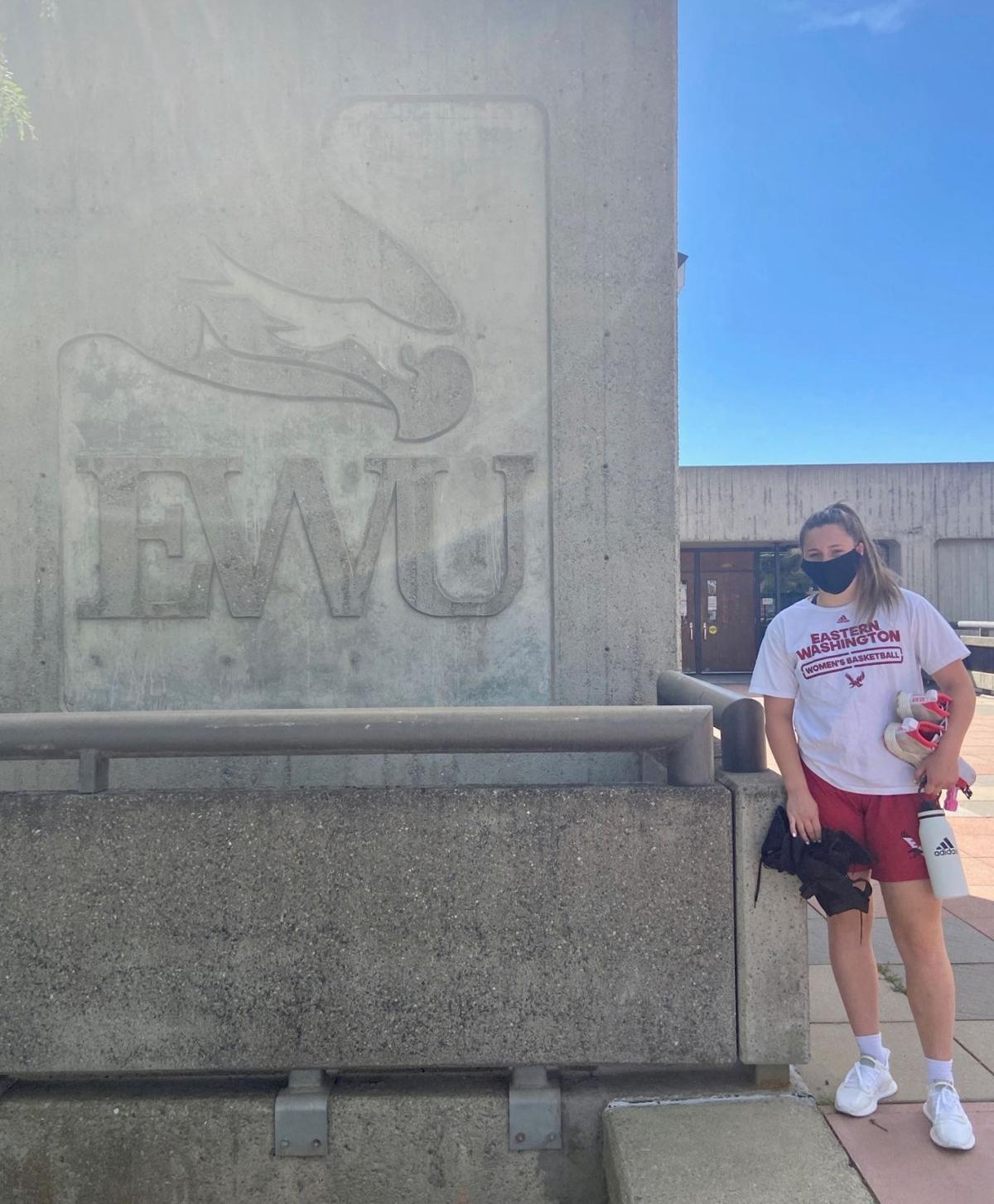 Kal Schaplow poses for a photo on the Eastern Washington University campus prior to basketball workouts on Saturday. 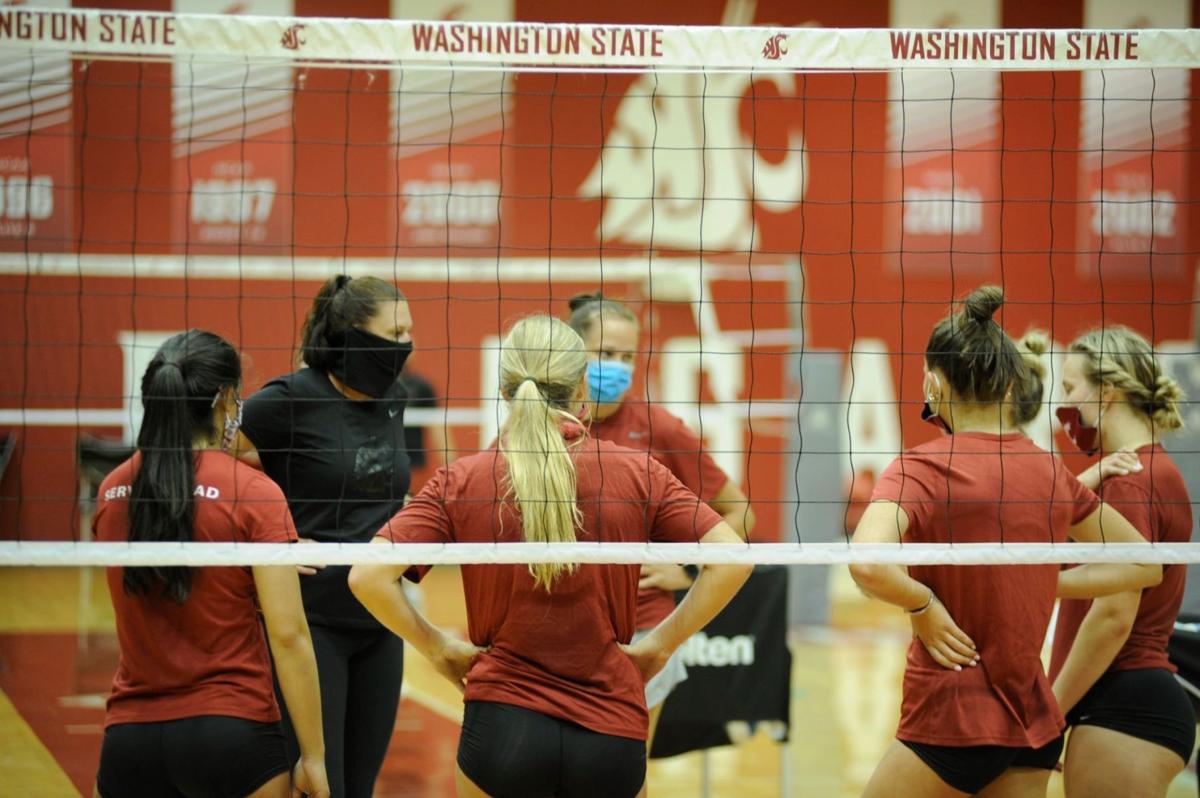 A group of WSU volleyball players pause to receive instruction during a practice earlier this month in Pullman.

For athletes like Logann Golden, Kal Schaplow, and Alex Brady the second half of August has delivered them to the doorstep of their dreams.

With Division 1 college practices striking up across the country, that trio of area athletes all find themselves doing exactly what they were born to do — compete for a spot. Except now they are playing in places far from their hometowns, and under circumstances that only seem normal under the absurdist magnifying glass that is the year 2020.

Still sports are sports, no matter where they’re played or if you’ve got to keep your distance or wear a mask. Accordingly, the area’s top collegiate fleet find themselves relieved to be back to the familiar grind of coursework, practice time, weight room, homework, power nap, wash, rinse and repeat.

Down in Baton Rouge, Louisiana former R.A. Long and Lower Columbia College standout, Alex Brady, is trying to find his bearings and enjoying some of that famous Southern hospitality.

“It’s a whole different atmosphere down here, man. It’s humid. It’s very unorthodox because of COVID precautions and we just got hit with a hurricane, too,” Brady noted.

A southpaw pitcher who is trying to carve out a spot in the bullpen for Louisiana State University, Brady knows that the time to prove himself is near at hand. And while the team has been restricted to small group gatherings for throwing drills, he can still feel the competitive atmosphere beginning to build up like some offshore turbulence.

“All these guys are legit. It’s exactly like I expected it. It’s been tough, but I love it,” Brady said. “It’s a competitive environment as well as a welcoming one. We all know we’ve got to bring it every day. It feels surreal but it also feels like a calm before the storm,”

Through his first fortnight in deep south Tiger country Brady says the heat and humidity have been the most difficult elements to adjust to.

“It was almost like a punch in the face when you went from in the car to out of the car,” Brady said of the weather. “But all the people are nice.”

That punch in the face hit the former Lumberjack right away while he was moving on to campus with the help of his father, Chris Smith. One of their first stops was at Alex Box Stadium, home of the LSU baseball team.

“I remember when I was standing outside the gate and just looking at the field from outside the gate, I can’t even put it into words. It really felt like the beginning of something,” Brady explained.

The LSU baseball roster already includes Brady’s full profile and he’s been outfitted with his own locker in the corner of the clubhouse. His roster profile includes the following scouting report from LSU head coach, Paul Mainieri:

“We are very excited about the addition of Alex to our program. Besides being a left-handed pitcher, he has a wealth of relief experience from Lower Columbia CC where he was their go-to-guy out of the pen.” He may not be the hardest thrower in our program, but he possesses three solid-to-above-average pitches that he commands well and can throw in any count. He is a fearless, high-character kid that we believe will be a dependable force for us—perhaps out the bullpen.”

So far Brady hasn’t found an opportunity to try out any deep fried alligator or crawfish gumbo, but he hopes to expand his pallet as soon as circumstances allow. For now, though, he’s just buckling down and trying to get off on the right foot wearing purple and yellow.

“We haven’t had a full team practice yet, so that’s kind of weird, but just being able to run across the field gradually and knowing that we are getting close to putting on the uniform and going out and competing is very exciting,” Brady said.

Over in Pullman there’s a former Rocket trying to make the transition from red and white to crimson and gray. With a mask on, Logann Golden has been practicing with the Cougars this month as she tries to make the team in a libero/defensive specialist role. The Castle Rock graduate has even been featured on the Cougars’ social media outlets.

Just a little more than a hundred miles away another local talent is trying to find her way at Eastern Washington University.

Kal Schaplow, a Toledo graduate, who is trying to carve out a spot on the basketball team before turning her attention to track in the spring, started putting in time on the court with the Eagles on Wednesday. She says that while it’s been a bit of a whirlwind getting moved in and geared up for practice, there’s nowhere else she’d rather be.

“It’s been great learning the drills and working with the coaches. I’m really enjoying learning from them,” Schaplow said. “The whole team isn’t on campus yet but I’ve liked meeting the girls that are already here. It’s also great working with TJ and Mike, our weights and conditioning trainers.”

Schaplow noted that coaches and trainers are outfitted with masks at all times and players wear masks whenever they aren’t engaged in their most strenuous workouts. She says that the strict COVID-19 related safety protocols have helped to make the transition to college life a little less nerve wracking.

“It definitely is different compared to all of my other athletic experiences but part of that is just that it’s a new level and environment,” Schaplow said. “I’ve only been training three days but really enjoy it. The coaches, trainers, and staff have done a great job making it a productive and normal basketball experience.”

The Daily News will continue to provide updates on area athletes and their college pursuits as they become available. If you have photos or information on an area athlete in college please send them to jnailon@tdn.com.

M's knocking on the door

It seems like it’s been forever since the Mariners had a legitimately good team. The kind of team you can recognize instantly by using only a …

The next collegiate win for the Red Devils’ new women’s soccer coach will be his first, but acting like he’s been there before shouldn’t be an issue.

If baseball happens and nobody's there, does anyone win?

As we sat through successive red and green lights and waited for trains to pass by in the crowded SoDo district of Seattle on Wednesday, sport…

The locker of former R.A. Long standout, Alex Brady, is seen in the LSU Tigers baseball clubhouse earlier this month.

Kal Schaplow poses for a photo on the Eastern Washington University campus prior to basketball workouts on Saturday.

A group of WSU volleyball players pause to receive instruction during a practice earlier this month in Pullman.