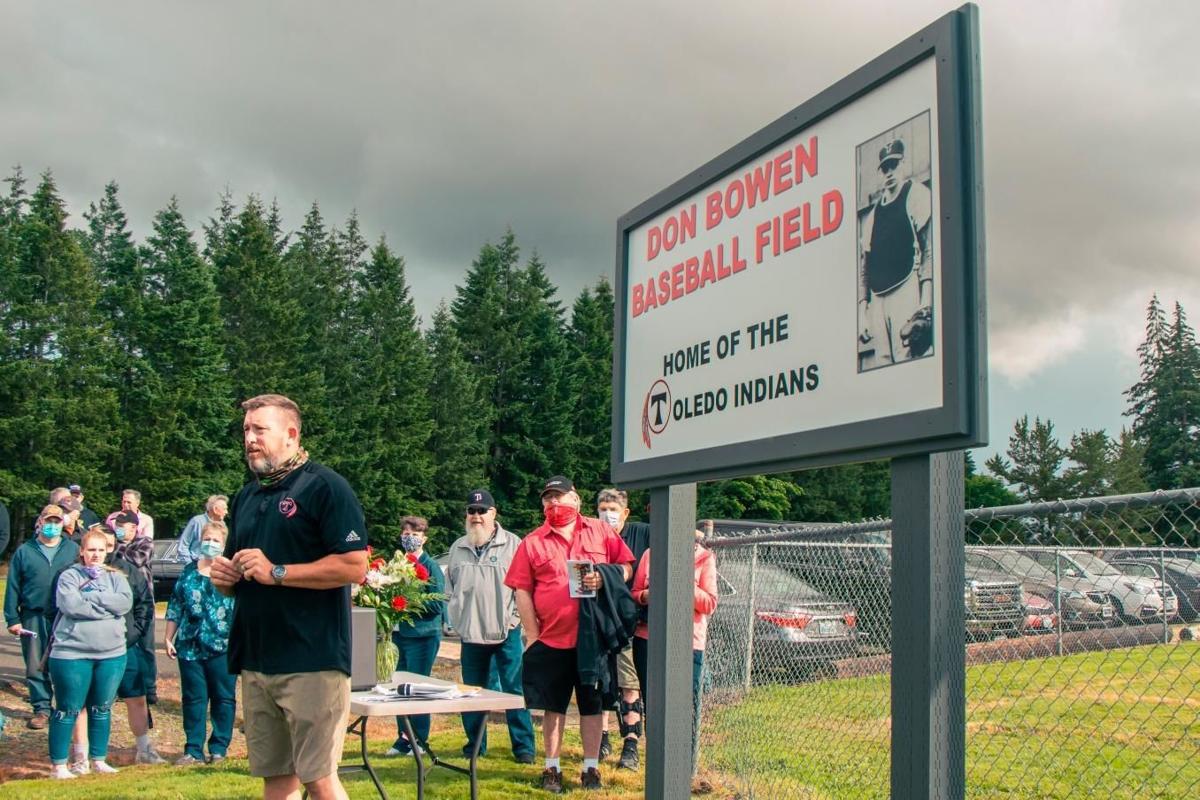 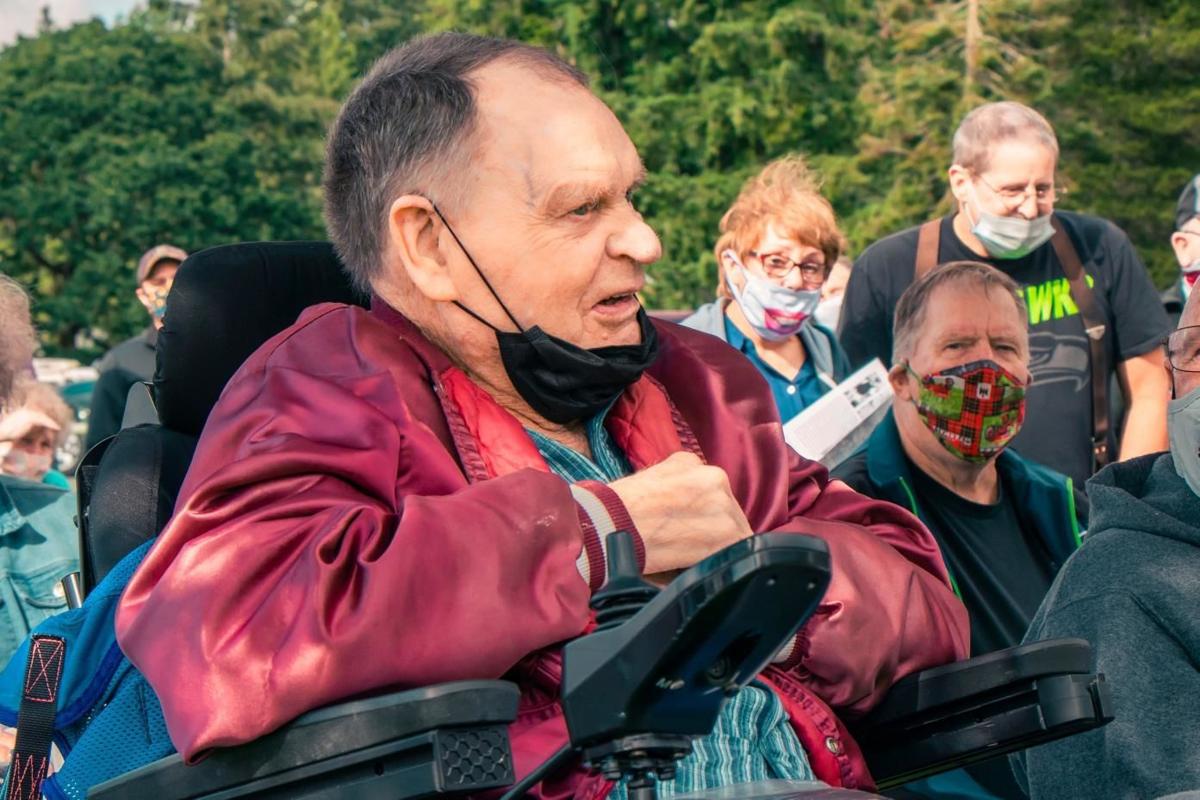 Don Bowen was present for the renaming of Toledo's baseball Field in his honor last week. 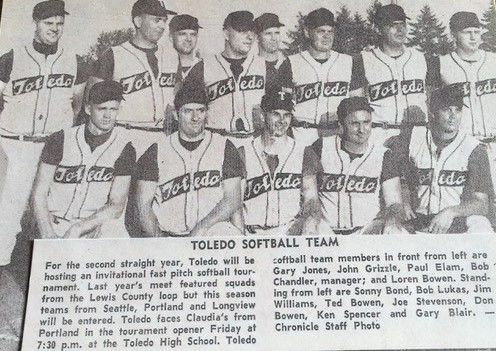 The Toledo men's fastpitch softball team poses for a newspaper photo before a big tournament.

Don Bowen was a catcher for Toledo High School. 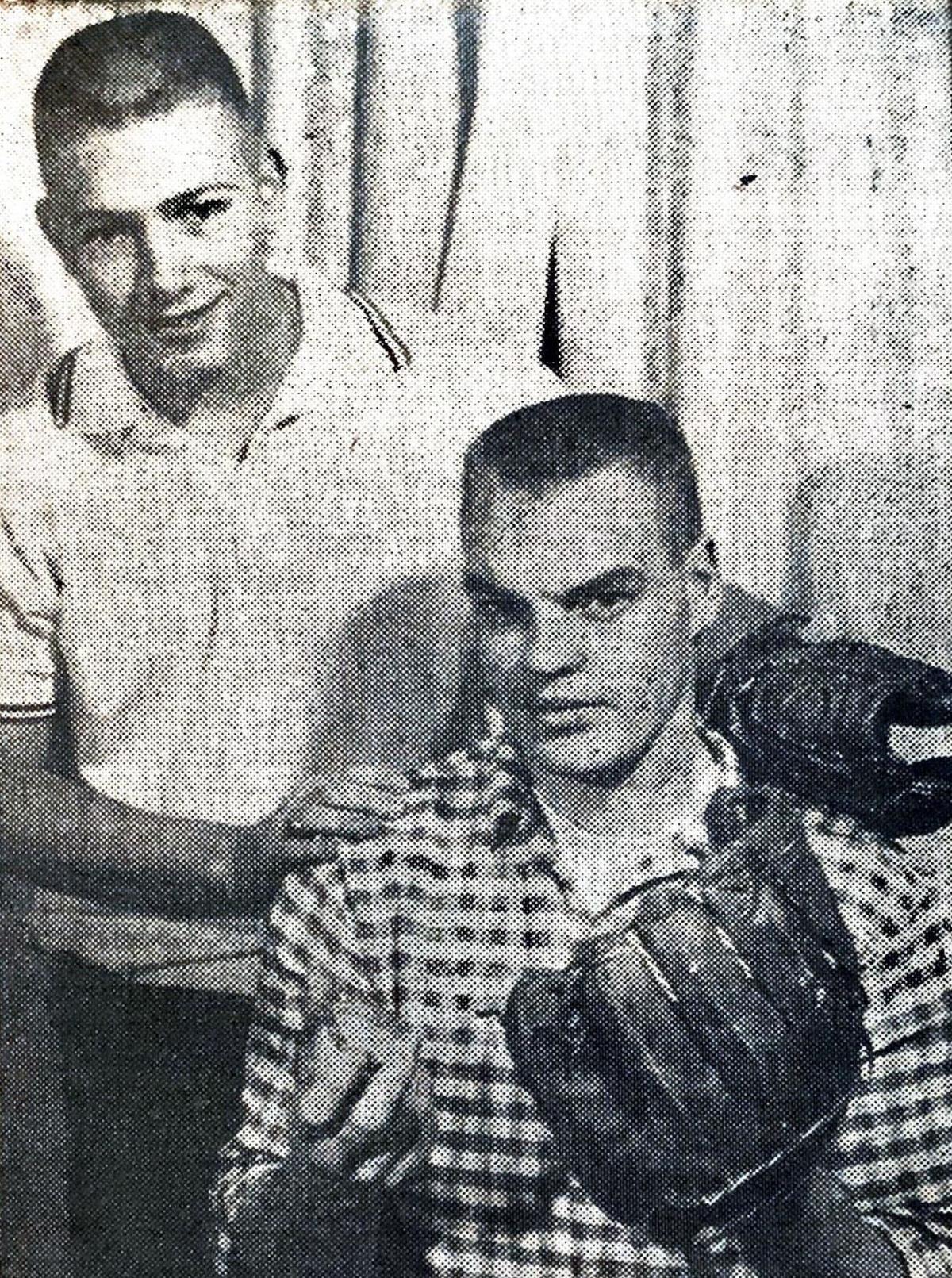 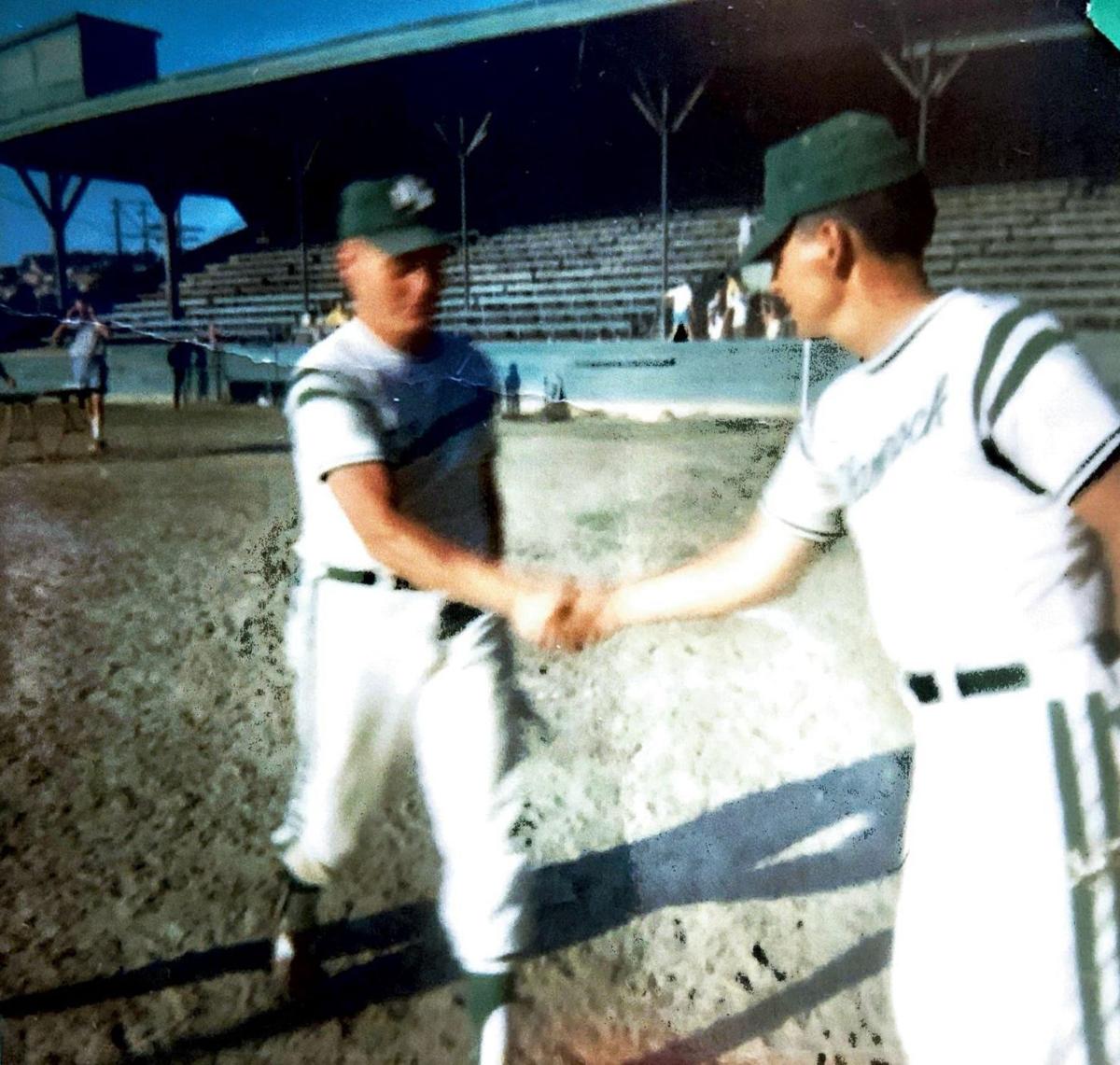 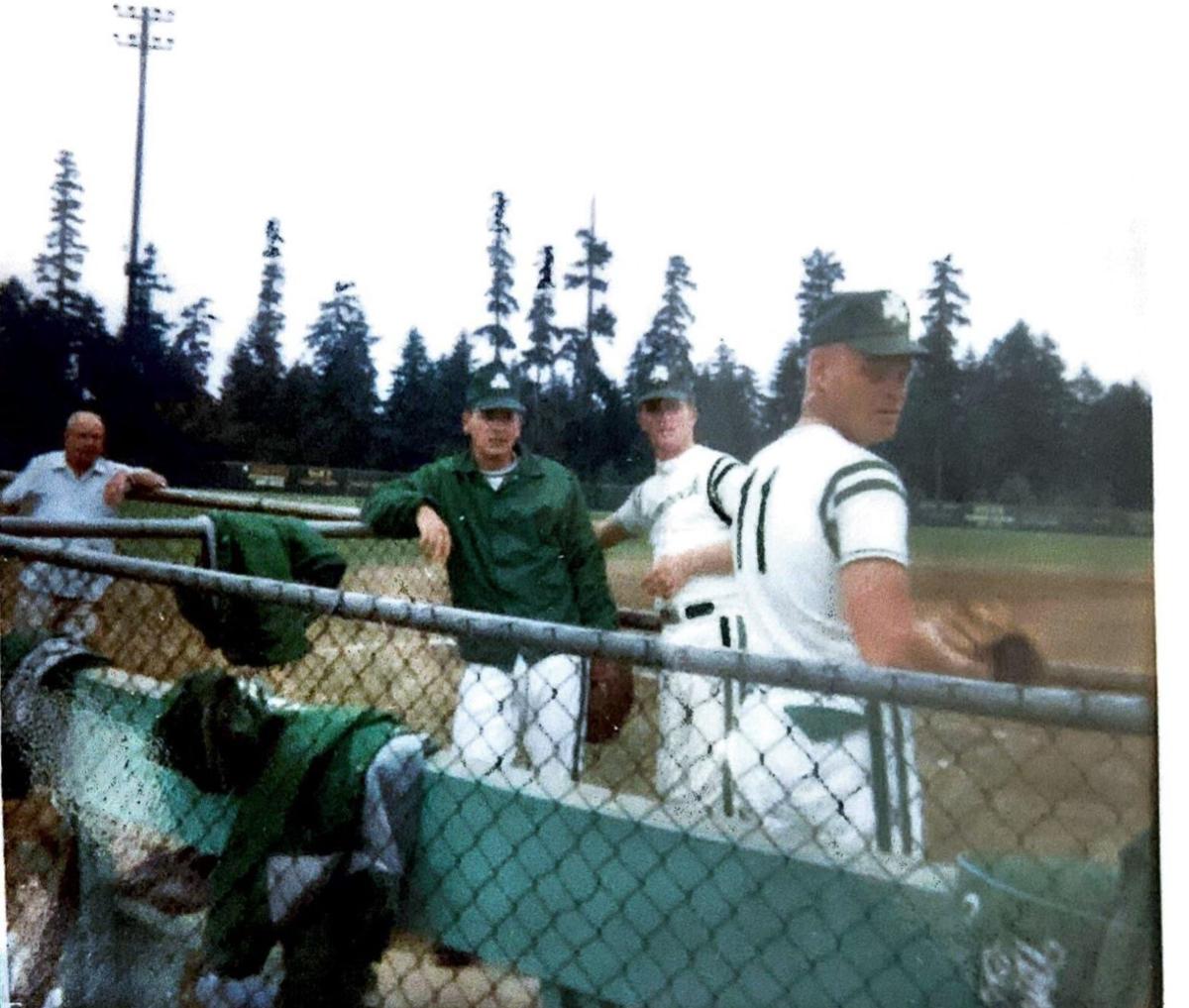 Don Bowen (11) and teammates stand around during a Shamrock men's fastpitch contest.

When Don Bowen was a freshman in high school, a round of routine field work gone awry nearly ended his athletic ambitions. A Toledo native, and a farm kid by nature, Bowen was crushed in a tractor rollover that left him with a severely broken hip, along with other injuries.

Now, nearly 70 years later, Bowen’s resilience has finally been recognized in a fitting fashion by his old school — A little field work.

Last week Toledo High School dedicated its baseball field to Bowen by naming it in his honor. Scores of friends, family, and old teammates gathered on school grounds in order to mark the occasion and Toledo athletic director Grady Fallon took care of the customary introductions. Bowen, a 1956 graduate, who is 82 years old today, was also on hand with his brother, Loren, and son, Tracy, close by his side.

During his salad days Bowen was a star for Toledo on both the hardwood and the diamond. That pesky tractor incident nearly put an end to that story before it got started, but a ballplayer so bullheaded he came away with the nickname “Moose” wasn’t going to give up that easy. So with a bulky metal brace affixed to his leg, Bowen kept hanging around and doing what he could to get better.

“When he still had that brace on his leg and was out on the basketball court he could probably hit at least two out of five shots from half court with a hook shot just because he hung around so much,” Loren Bowen recalled.

After a couple years the elder Bowen was ready for a full return to the court, and the fields, just in time to play alongside Loren as he entered high school. That just happened to coincide with the boys basketball team’s first trip to the State tournament, which has since become a tradition so dependable you can nearly set your watch to it.

“He could really pass the ball. When he was in you had to keep an eye out because he’d just whip it at you,” Loren Bowen remembered. “I know a lot of those guys took a ball to the side of the head before they figured it out.”

On the diamond Don Bowen would gladly strap on the tools of ignorance, or, he’d set up at the hot corner and hope a batter brought some smoke down the line. After graduating from Toledo he went on to play both basketball and baseball at Centralia College, where he has been a member of the school’s hall of fame since 1990.

In the summer, when he wasn’t working the fields, Don Bowen was playing on them. As a prep he was a perennial member of the Lewis County All-Star squads. Then, during his college years he played semi-pro ball for the Pacific Sand and Gravel Pavers before being signed by the Cleveland Indians. His pay to play pro ball — A $1,500 signing bonus, $500 a month, plus room and board.

During his stint as a minor leaguer Bowen was teammates with Tommy John (of so much elbow related fame) and roommates with “Sweet” Lou Piniella. He also had Ted Williams, the “Splendid Splinter” and the last player to hit .400 in a major league season, as a hitting coach.

Of course, not all dreams come true in the way we first envision them and Bowen’s tale of minor league baseball, like most others, came to an end before reaching the majors. Still, that did nothing to sully his spirit for the game.

Upon returning to Southwest Washington following his time in pro ball Bowen wasted little time in finding a new team. The first dugout he wound up in was with a men’s fastpitch softball team out of Toledo, which his brother Loren was also playing for. Even on the softball circuit the hard nosed kid from Cheese Town preferred to play closest to the batter as a third baseman.

“I played second base and he’d always look over there at me and say, ‘I’d never want to play there. Too much time to think,’” Loren Bowen recounted. “‘On third base, you don’t have time to think. You’ve either got it or it’s by you and that’s it.’”

After making the All-State team in his first year of competitive fastpitch play Bowen spent one more season with the Toledo team before being recruited to play with the big timers from the infamous Shamrock Tavern team out of Longview’s burgeoning premier league. While playing for the Shammy squad Bowen starred as both a pitcher and a high average batsman, winning several MVP honors and All-State accolades. In 2007, Bowen was elected to the Longview Fastpitch Softball Hall of Fame.

“When we went to Longview we separated so I never did play with him in fastpitch until a lot of us retired and they needed some players so a lot of us came back together and made a team of some of the area’s best players,” Loren Bowen said. “Even though we hadn’t played in two or three years we won it. Everybody just had a ball because everyone kind of knew everybody.”

But when they were playing on opposing teams, Loren Bowen always knew that big brother was going to try to put the whammy on him.

“I always played against him and of course he hit left-handed. I played right field and you always hated to see him come up,” Loren Bowen said. “When we played in Longview for fastpitch, I think on a double play he just ran through me at second and upended me. Somebody said, ‘My goodness, that’s your brother.’ I said, well I’d do the same thing to him. That’s just the way we played. We certainly weren’t out there to lose.”

The Daily News was not notified in advance of the dedication ceremony by the Toledo School District in an effort to keep crowds down while Lewis County is currently in Phase 3 of the COVID-19 reopening process. The ceremony was originally slated to take place during the Toledo high school baseball season.

Organizers had asked Bowen to throw out the first pitch but a decades long battle with multiple sclerosis has left him mostly immobilized. In his stead the Toledo legend had asked his grandson, Cameron Bowen, to toss out the ceremonial strike so that four generations of Bowen ballplayers would have been on the field at once. That special opportunity was scuttled by the scourge of coronavirus which ultimately resulted in the outright cancellation of the prep season.

While last week’s event was scaled back out of an abundance of caution during a period of pandemic, Don Bowen was still moved by the appearance of so many friendly faces, even if he couldn’t recognize all of them due to all of the years and masks in between them.

“He never says too much but you could tell he was very pleased,” Loren Bowen said of his brother. “It’s just too bad it didn’t happen like it was planned back in March.”

Indeed, Don Bowen confirmed his elation in real time at the event when he told The Chronicle, “It’s amazing...It’s quite an honor, that’s for sure. I’m surprised to see this many people. Pretty special. I appreciate it. Quite a day to be here.”

While not all stories have fairy tale endings this chapter for Bowen has certainly been a fitting, and most deserved narrative — Nearly seven decades after a young hayseed nearly lost it all to the hard place between a tractor and a pasture, Don Bowen has officially made his mark on a field of his own.

— By Todd Miles of Scorebook Live

Editor's Note: During his one season (1967) at the helm of Mark Morris basketball Pepple cobbled together a record of 6-14. While that mark st…

Swinging in the Dark: Players gear up for ‘Moonlight’ over Mint Valley

One night a year, as the crisp of autumn sets in all around, the concept of moonlighting as a golfer takes on a whole new meaning at Mint Vall…

R.A. Long will be giving at least one Rocket a boost next spring now that the Longview School Board has approved a request to run the boys gol…

What's in a mascot?

In the 1960s, Chief Don Lelooska carved a 140-foot totem pole from a single red cedar tree. That ornate timber was placed with reverence at th…

Don Bowen was present for the renaming of Toledo's baseball Field in his honor last week.

The Toledo men's fastpitch softball team poses for a newspaper photo before a big tournament.

Don Bowen was a catcher for Toledo High School.

Don Bowen (11) and teammates stand around during a Shamrock men's fastpitch contest.