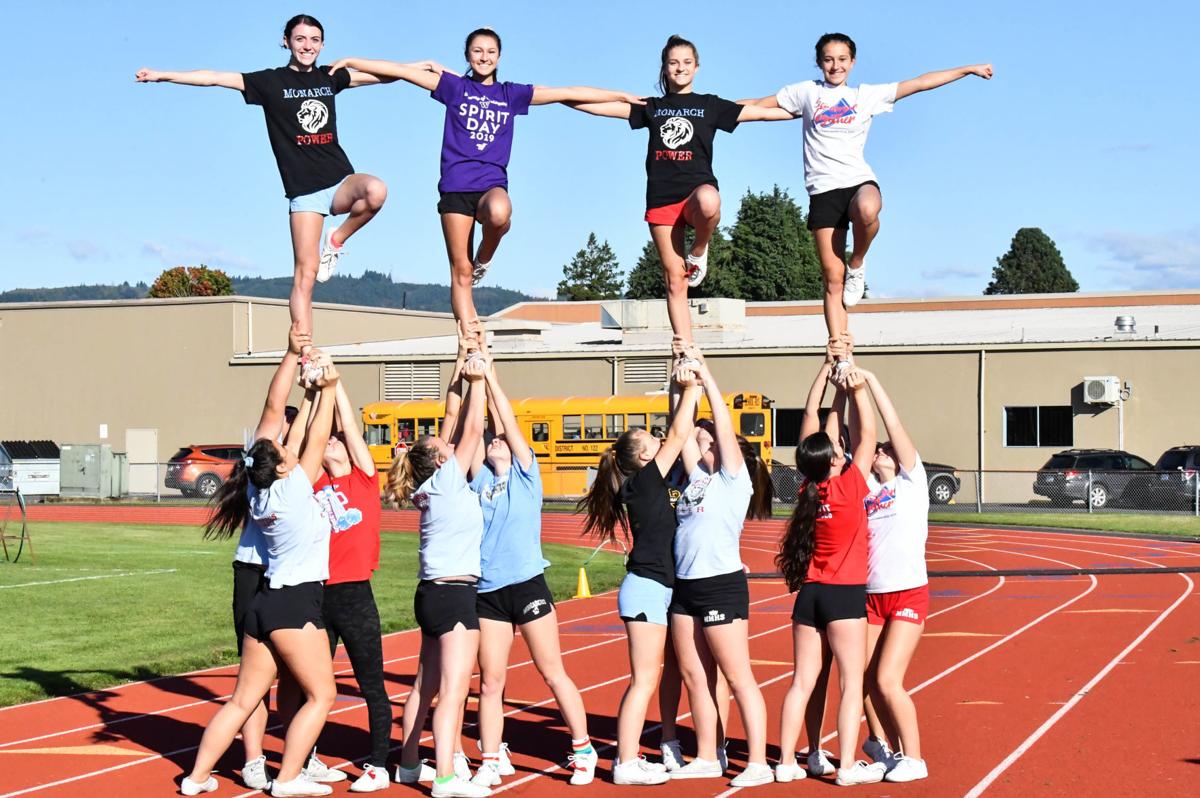 The Mark Morris cheer squad practices a full team stunt on their track. 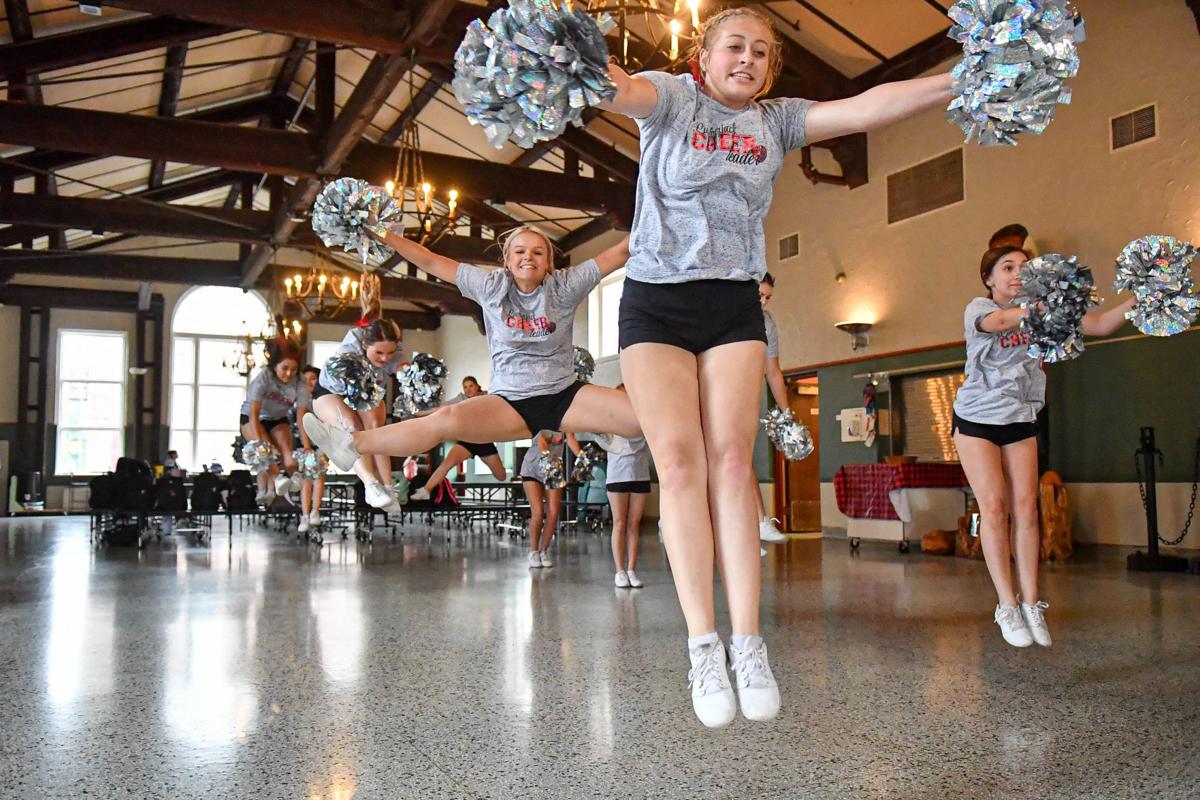 The R. A. Long cheer team started practice in the Annex, but had to move to the school cafeteria to practice after the cross country team came into the Annex. 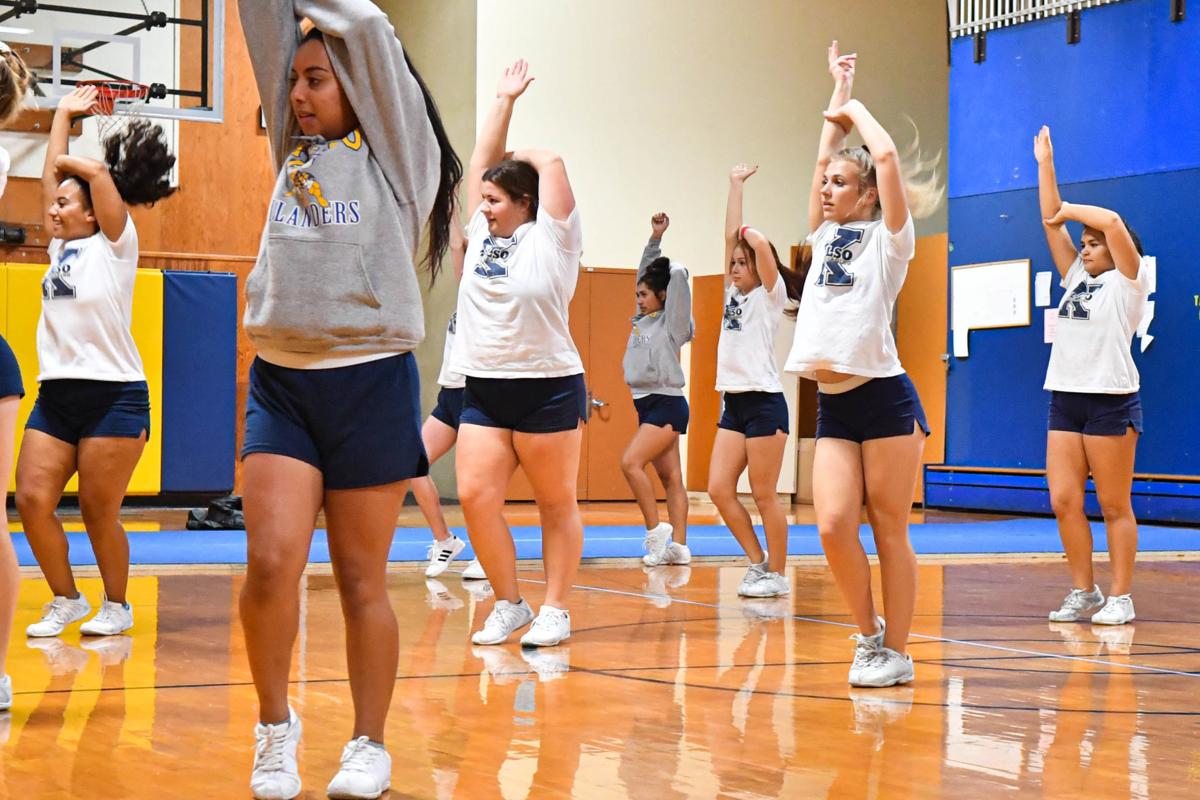 The Kelso cheer team holds practice in the upper gym, where they can use their stunting matts and have space to safely practice all their routines. 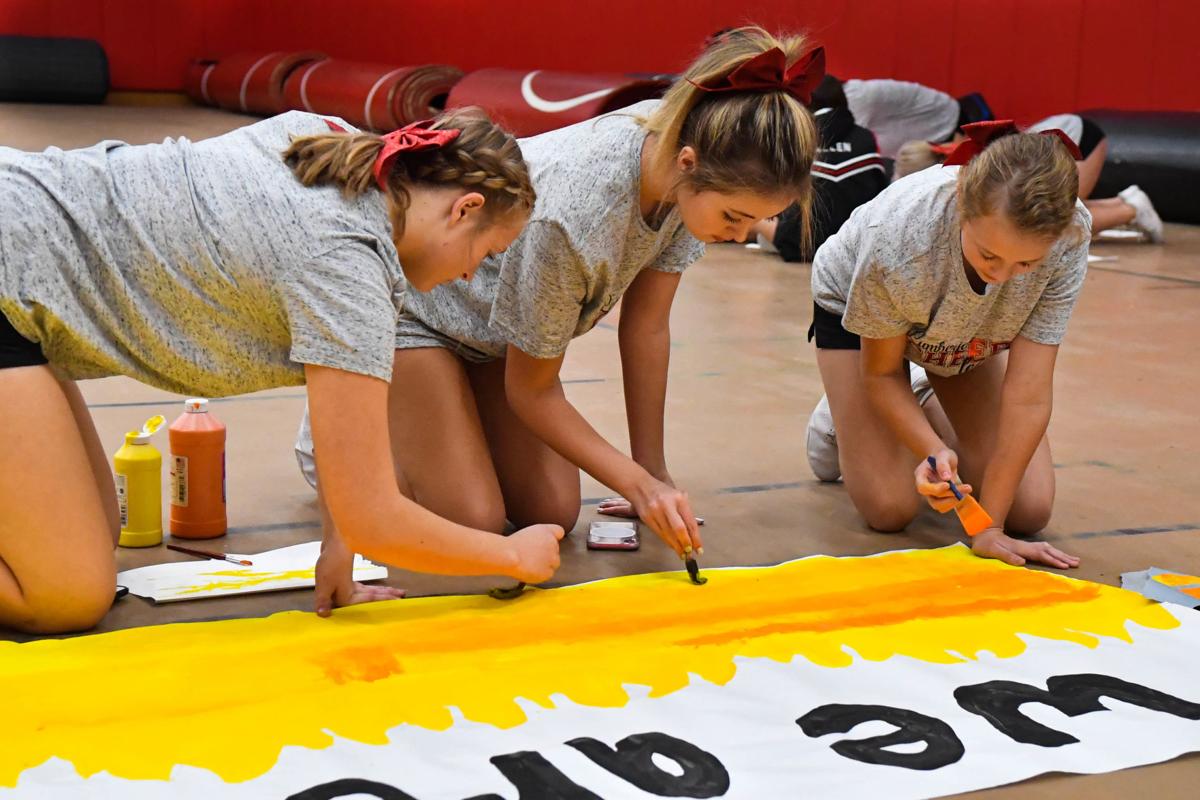 R.A. Long cheerleaders paint signs for the football game Friday night in the school annex before being asked to move. 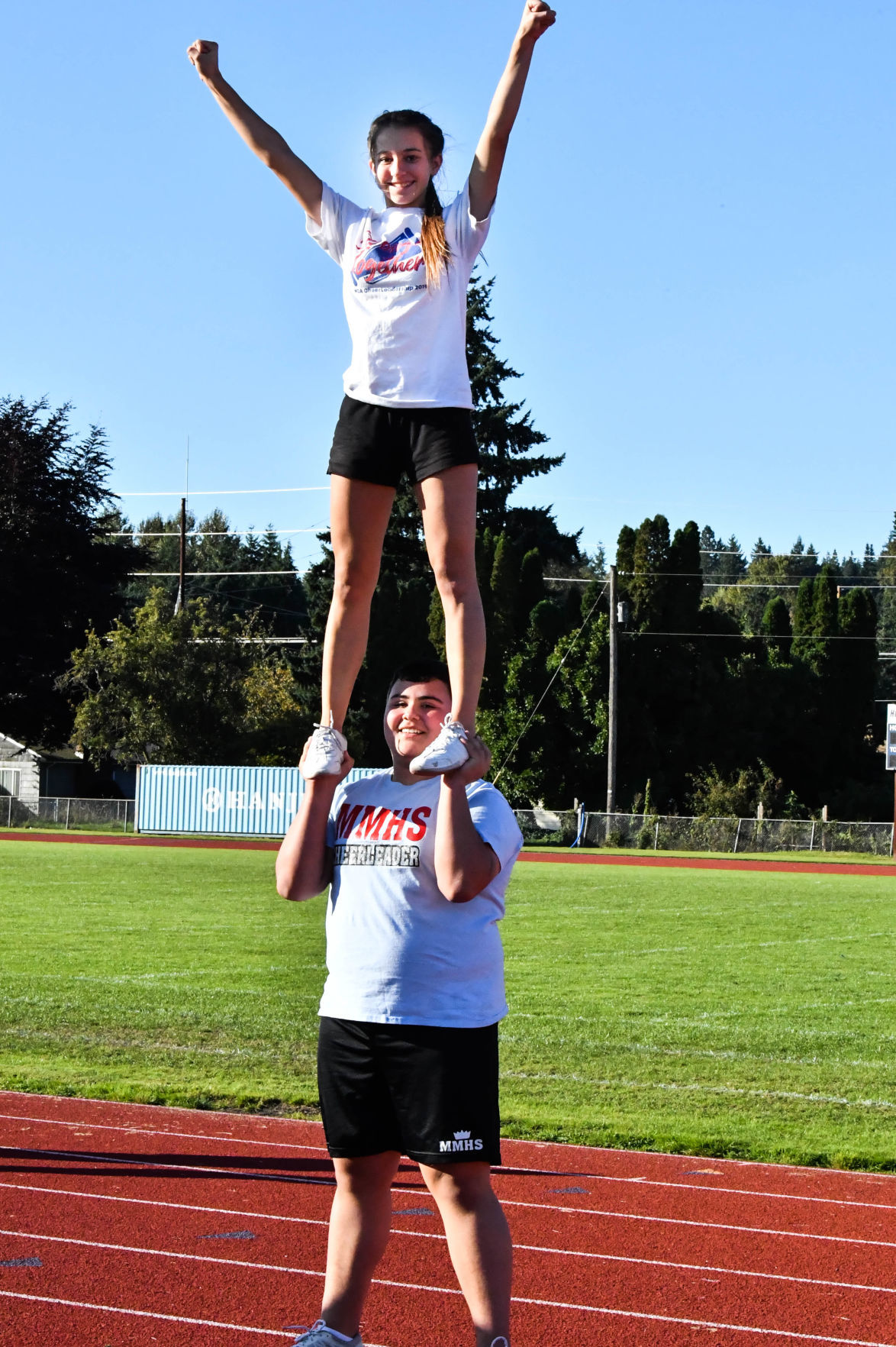 The Mark Morris cheer squad practices a full team stunt on their track.

The R. A. Long cheer team started practice in the Annex, but had to move to the school cafeteria to practice after the cross country team came into the Annex.

The Kelso cheer team holds practice in the upper gym, where they can use their stunting matts and have space to safely practice all their routines.

R.A. Long cheerleaders paint signs for the football game Friday night in the school annex before being asked to move.

They are the symbol of excitement, the anticipation of what’s to come and the hope of succeeding. Many little kids grow up watching them, wanting to be a part of that excitement.

But like so many things in life, the excitement doesn’t come without the hard work. The large signs players plow through on their way onto the field, the T-shirts thrown to the crowd after a touchdown, the posters hanging on the rails throughout the stadium are all done by cheerleaders.

“I did junior cheer when I was little. I saw the cheerleaders at Mark Morris as a kid and always admired them. I wanted to be a cheerleader just like them,” said Mark Morris cheer captain Ella Bilger.

“I didn’t come into high school as a cheerleader. I didn’t know it wasn’t just shaking pom poms around. There’s actually a lot more into it,” said Hannah Harlin, Bilgers co-captain.

“When I was in middle school, I didn’t even watch the cheerleaders, I really didn’t notice them. They don’t talk about them, they only talk about the football team,” Kelcie Balkan, an MM cheerleader said.

While many boys join the football team for that exact reason, Antonio Rhaas was more focused on getting out of his box. As Mark Morris’s only male cheerleader, he wanted to participate in a sport that was fun and pushed him out of his comfort zone, he said.

Rhaas said he started cheerleading because of a friend, and has enjoyed it every since.

“Everyone’s been so supportive,” Rhaas said. “I never thought I could get it, but at the same time I knew I could because literally anybody can do anything if you try. It’s like every other sport: It is fun to do, but there’s a lot of work.”

Kelso, Mark Morris and R.A. Long all practice five days a week for at least three hours a day. They work on jumps, stunts, dances, cheers, and more.

“There’s a lot to it. I don’t think they get the credit that they deserve because they kind of make it look easy, said Mark Morris cheer coach Michelle Opgrande. “When you really look at it, it’s pretty impressive, what they do. They are athletes. It’s a commitment. It’s pretty impressive.”

Many cheerleaders listed cardio, conditioning, jumping, and strength training as weekly activities they undertake in practice.

“There’s a lot more work than people think there is. We practice a ton,” Rhaas said. “I think people just think it’s just cheering the entire time. But it’s not, its conditioning, running, pushups, planks, and all these different types of workouts.”

Harlin said she thinks many people see cheerleading as it’s portrayed in movies.

“It’s a lot more than that. We’re not always the stereotype,” she said.

“It’s a lot harder than it looks. Just the stunts itself, a lot of people think, ‘Oh, I could do that,’ but it’s a lot of strength,” Bilger added.

“I think that’s the big disconnect between the student body and us. They just don’t see how much work we’re actually putting in to this program,” RAL cheerleader Erika Braack said.

More than prancing with pom poms

All three teams said they put in countless hours of work outside of practice that no one knows about, just to make Friday nights a little more special.

According to Bilger, the Monarch cheer team has 18 dances and 80 cheers memorized for games, events or songs.

“If it’s a boring part in the game, we’ll try to do pump-up ones to get the crowd involved. If it’s an intense part of the game, we have a dedicated set of cheers for defense, offense, getting a touchdown, stuff like that,” Bilger said.

“There’s a lot of behind-the-scenes stuff. We run the whole basketball tournament during the summer. We time for swim sometimes and we paint the signs for football games. I don’t think a lot of people know that,” Harlin said.

“We don’t just stick with football. Your sport matters just as much as football,” Kelso cheer coach Megan Lamb said.

Cheering is only half of what they do, according to their title. They also lead. That job never stops, Kotera said.

“I love the leadership aspect of it. These kids have an opportunity. They just are leaders in the school and community. What the kids learn through it is pretty important. They have a lot of ability to make changes in the school and have an impact,” Opgrande said.

“I do think our community has a little bit more respect than our school. The other day I got coffee and this little girl looked at her mom and said, ‘She cheers for school, mom.’ It put a bright to my day. Being able to set an example for kids is cool. But for R.A. Long, we just kind of get overlooked,” RAL cheerleader Kennedy Keith said.

Braack said the RAL cheer team is the living example of RAL’s moto; respect, achieve, lead. She said they bring that mentality to everything they do.

Cheer is one of those things people don’t realize is important. It’s one of those ‘You don’t miss it until it’s gone’ things,” Braack said.

Cheering to an empty stadium is worse than playing to an empty one, a few girls said. The crowd involvement that comes with a huge rival or home game makes it more fun for everybody. Having an engaged crowd is make or break for a cheer team according to the coaches.

“The Friday nights, if it’s a packed crowd like at Civil War, it’s incredible. It’s rough when the student section gets quiet and then they get occupied and then they all just leave so it gets to the point where we’re just cheering to an empty little section with one or two kids,” Keith said.

Without a crowd to cheer to, teams are left listening to their chants echo back at them from the empty stands.

“It’s thrilling, the whole crowd is there and they cheer with us. It’s nice. I think it helps because we make everything more exciting,” said Kelso cheerleader, Courtney Heinlen.

“I think when no one’s paying attention or being involved with us or just kind of sitting there and not really getting engaged with it, like we’d like them to, it’s kind of frustrating. But that’s only sometimes,” Harlin said.

The excitement the squad brings to the field and stands can help boost morale in a losing game or increase enthusiasm in a winning one.

“I believe there is a big impact on the football team, because even if the team is losing, our student sections are still having fun,” Balkan said.

Many of the players have told cheerleaders they make a large impact on the team’s mood, according to Harlin.

“Some of the football players will tell them, ‘It’s so much better when you guys are there.’ Their job is to get the students and the fans as excited as they can. Even parents will say it is better when they’re there,” Lamb said.

Forgotten, but not gone

Many people on the teams said cheerleaders are discounted or passed over.

Last year at an RAL assembly, all clubs and sports were acknowledged. According to Keith, the entire cheer team was left out.

“A few of us cheerleaders stood up like, ‘Yeah, cheerleaders!’ Because we do a lot. We go to every sport; we are very involved with the community. If we walk around campus on a game day, it’s just like, ‘Oh, those are cheerleaders.’ They don’t even pay attention,” Keith said.

Friday nights are when the squads feel the most valued and seen, according to Harlin. It helps make the bright stadium welcoming to everyone.

“I think it’s important for us to be there because it also brings out the students who aren’t necessarily super into football, but they’re there for entertainment purposes. I think we’re a big part of the entertainment of the game,” Harlin added.

However, the entertainment can only be as good as the practices. RAL and MM don’t have designated practice spaces.

RAL moves from space to space to be able to paint and practice. MM usually uses the cafeteria when it’s available.

“We get bounced from the annex to the cafeteria; we’ve even practiced in the parking lot before,” Kotera said.

Both teams also lack transportation to and from games.

The Kelso cheer team rides with the football team to games. They also usually practice in one of the school’s many gyms. According to Lamb, the cheer team is a staple of Hilander football.

“People look forward to this. Especially here in Kelso, there are some deep-rooted traditions and a lot of that is from cheer. People remember. The Hilander cheerleaders are kind of a big deal in this town,” Lamb said.

This is Opgrande’s first year as a cheer coach, but she said she has always thought people take them for granted.