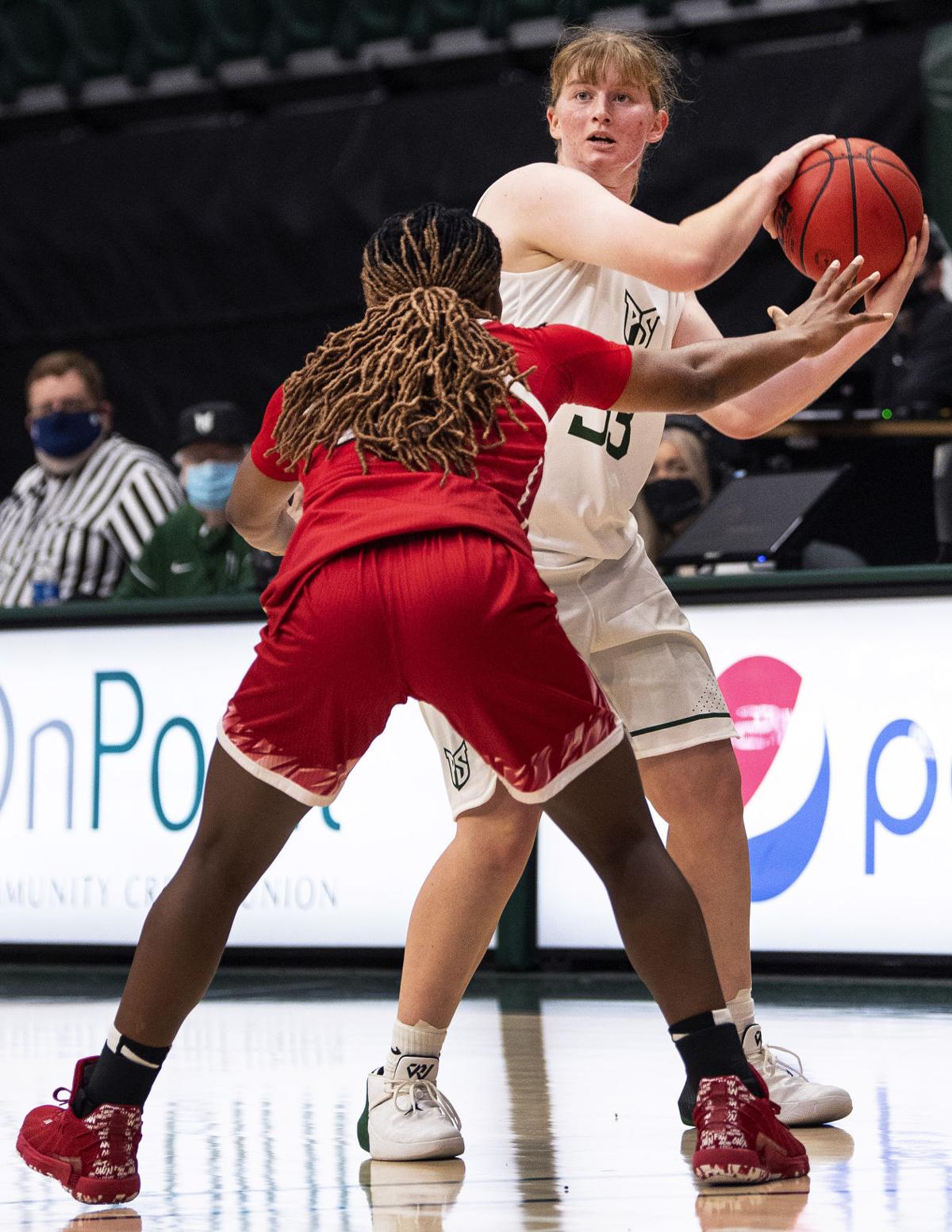 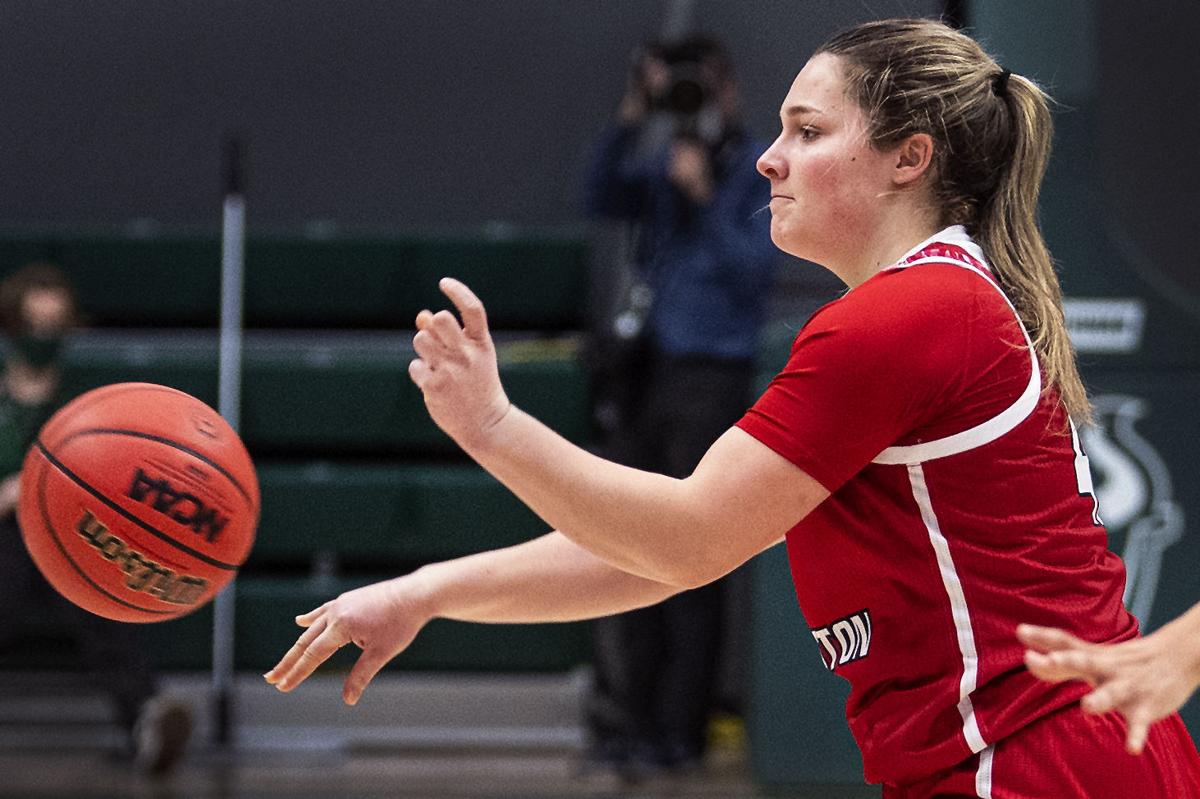 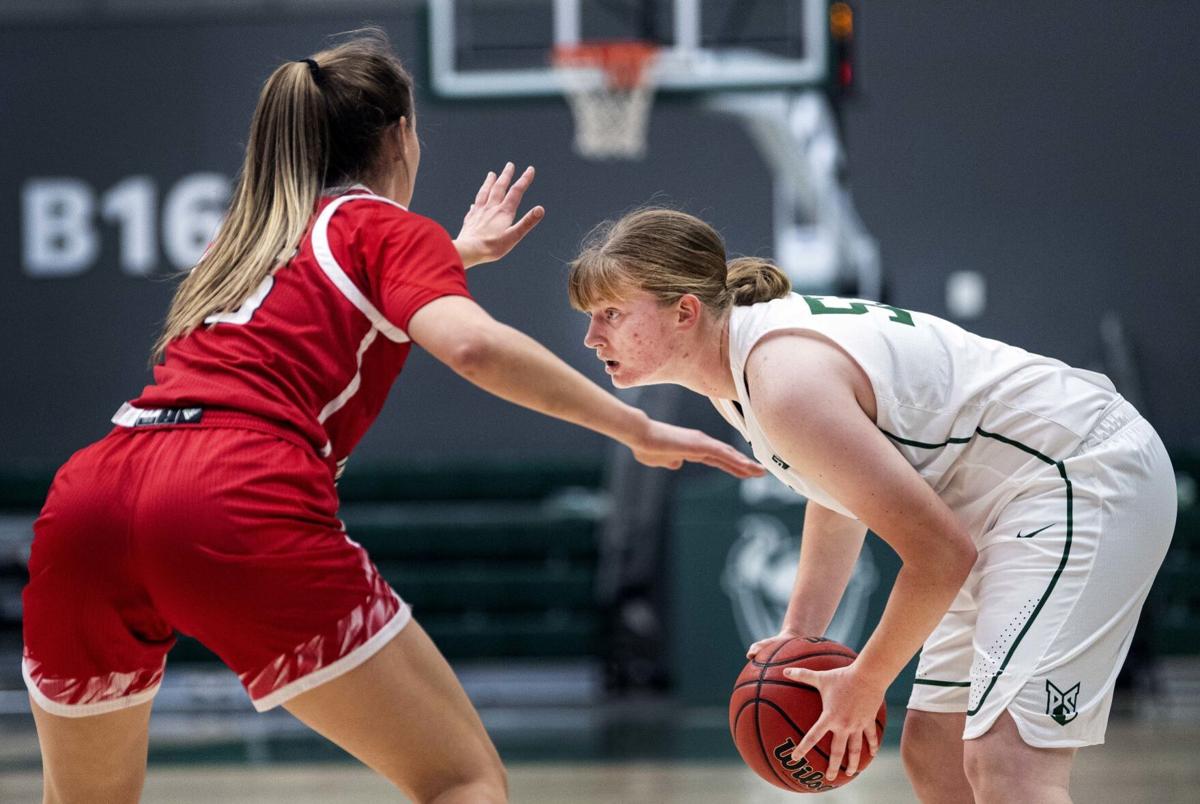 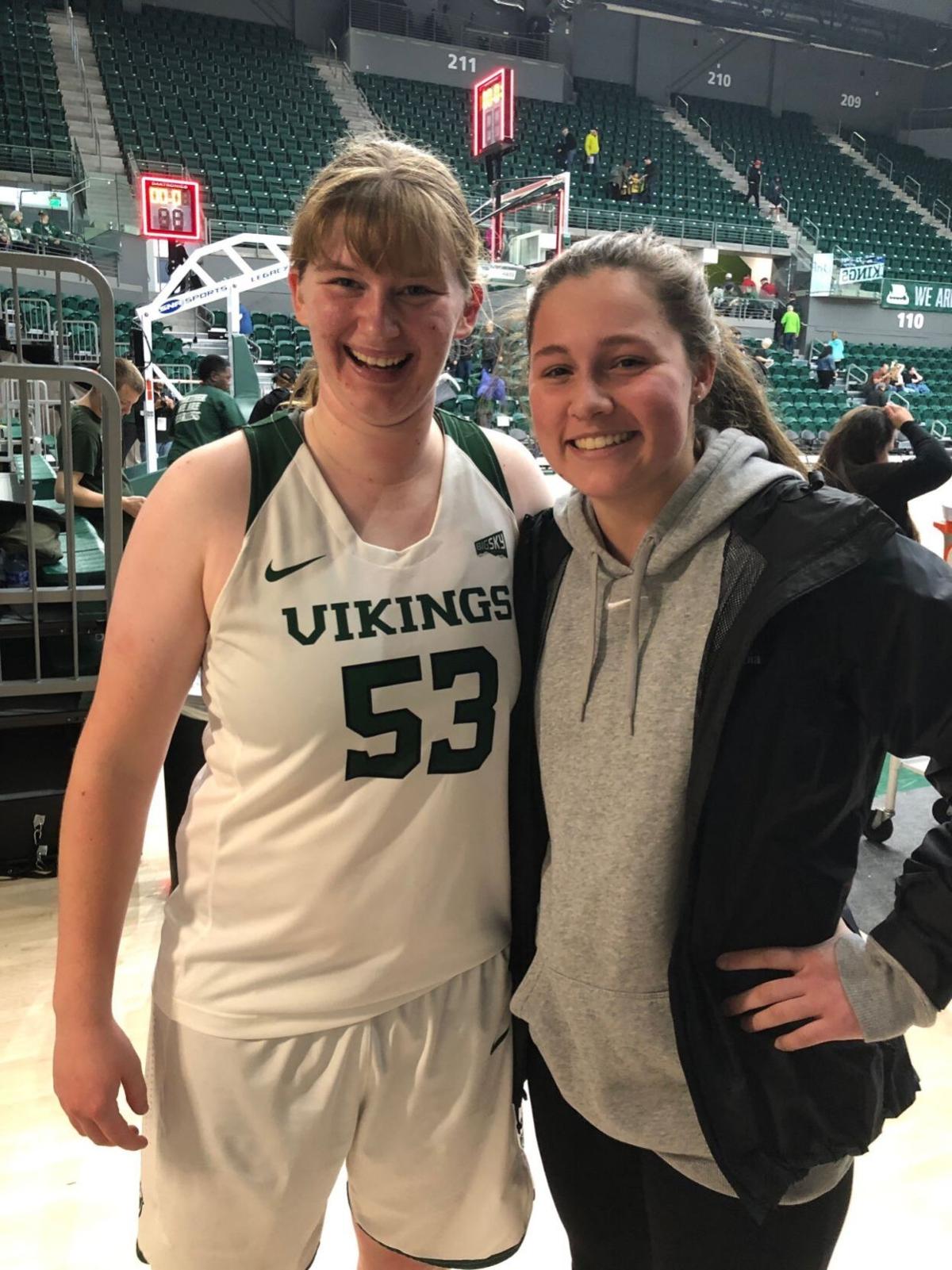 Desirae Hansen, left, a product of Rainier High School, is greeted by Kal Schaplow, then a senior at Toledo High School, following a game at Portland State during the 2019-20 season. Last week the former club teammates faced off in a D1 contest when Schaplow and the EWU Eagles came to Portland. 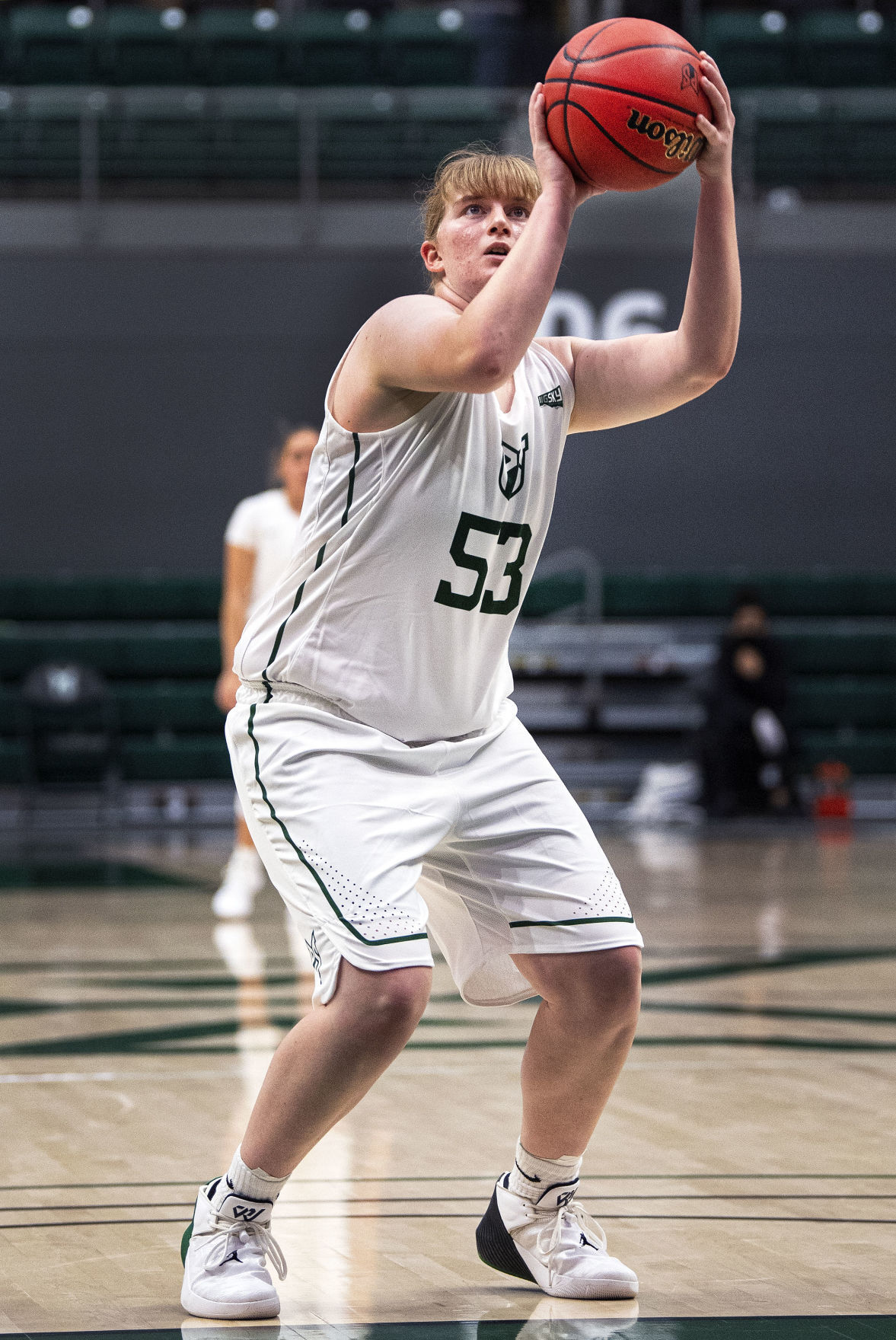 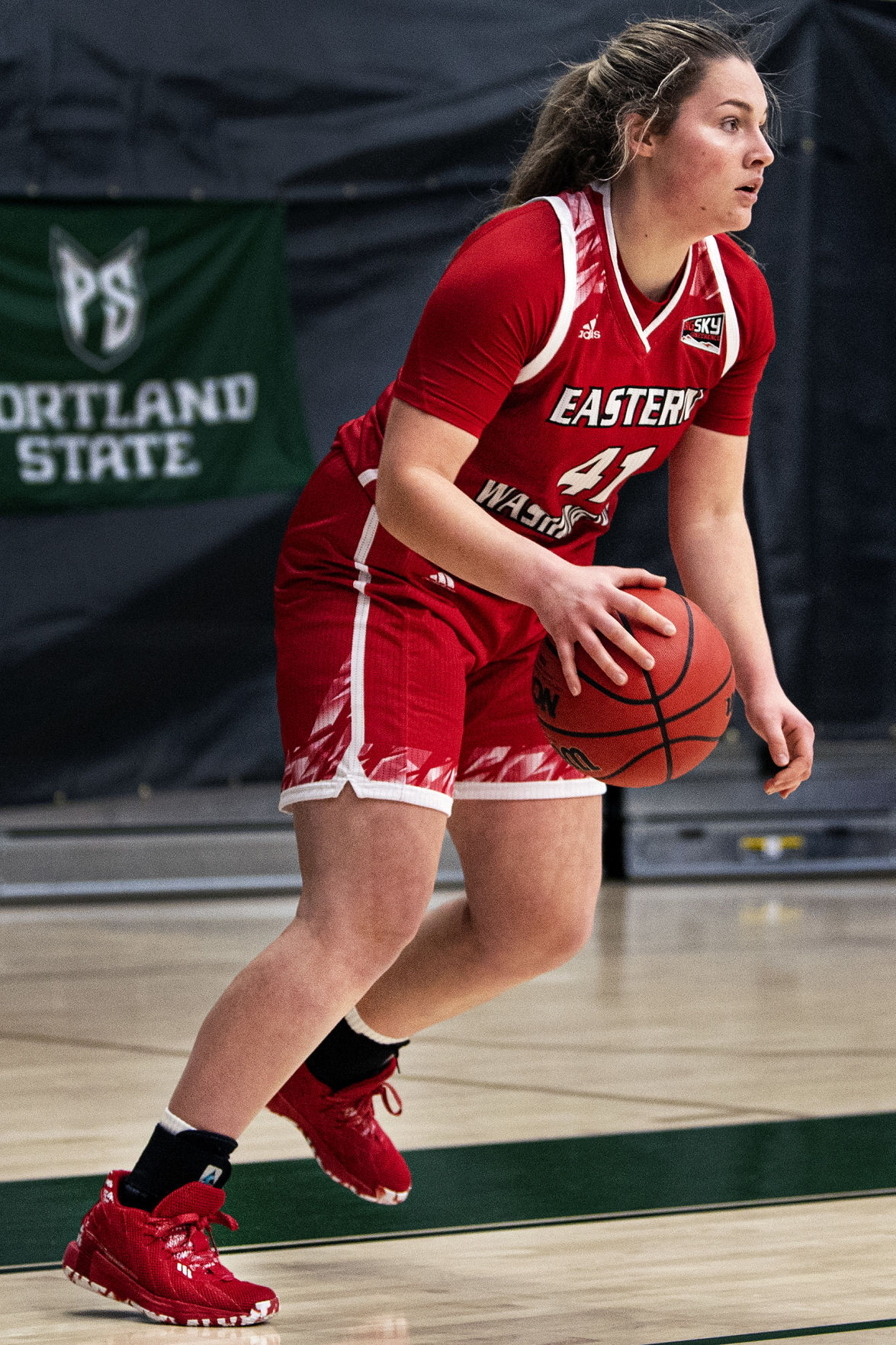 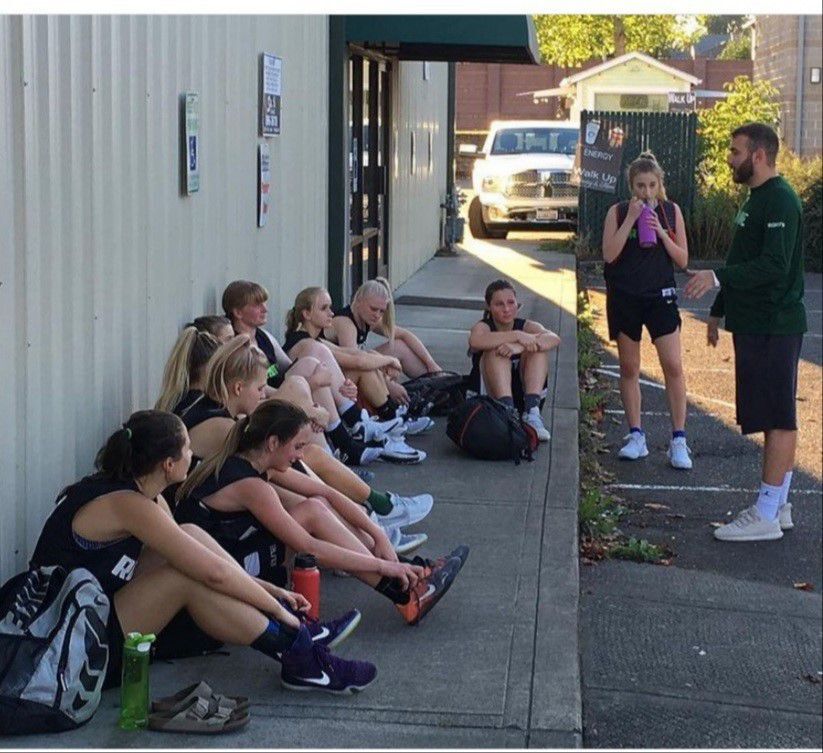 Desirae Hansen and Kal Schaplow enjoy the plush comforts of travel basketball during their days with Roots Academy. These days, the two players are both in the midst of D1 college careers at Portland State and Eastern Washington, respectively.

In a normal year, Eastern Washington’s trip to Portland State would have been a massive event for basketball fans in Southwestern Washington and Northern Oregon. It would have been a game between two teams suiting up players from the area — PSU bringing Rainiers’ Desirae Hansen and EWU bringing Toledo’s Kal Schaplow — which would have enticed large contingents of friends and family in to pack the stands at Viking Pavilion.

And it would have been a marquee matchup for Roots Academy, still in its first decade of existence, seeing two of its alums facing off at the Division I level. There would have been meetings and reunions, social media posts and conversations and catching up.

But alas, it was 2020. Well, technically it was 2021 for the second game. Still, nothing is normal. The stands were empty. There was no chance for any meeting up outside the lines and after the whistle. Hansen tried to get Pisapia in the door — he’s also an assistant coach at Division III Lewis & Clark, so it wasn’t completely out of the question

— but to no avail. And, the only real interaction between her and Schaplow came from way across the court.

“I was able to give her a quick smile and wave before we started the game,” Schaplow said after Saturday’s matchup.

It was far from fitting for their first college matchups, given how closely Schaplow and Hansen’s journeys have intertwined been before.

Hansen played for Roots — and first met Pisapia — as an eighth grader, then found her way back after her Portland-based AAU team split up and stuck with the program. Two years behind her, Schaplow first got introduced to Roots at an all-star game as a middle schooler. While there she also watched two other Roots products play: Kourtney and Karley Eaton of Mark Morris, who went on to play at UC Davis out of high school.

“After the game, I went up to them, and I was like ‘What did you guys do? What’s one thing that helped your game?’ Schaplow said. “They said Roots.”

So Schaplow got in contact with Pisapia and joined the program as an eighth grader. Her first spot wasn’t even on a real roster, but as a practice player — on Hansen’s team.

Soon, though, the younger newcomer had begun to make an impression on Hansen.

“Kal was always in the gym,” she said. “Any time I’d go work out, Kal was always there. She always asked questions and was willing to work, willing to learn. That’s really something you look for in someone, and if they’re willing to do that, why not step up and help?”

That’s precisely how, as Pisapia put it, Hansen began to take Schaplow under her wing. The two played together another year before Hansen graduated from Rainier High School and went to PSU. In that time, Hansen helped Schaplow get up to speed at a new level of play. She showed her how to develop into a leader for when it was her time to be the older face on the team. And Hansen’s passing abilities — Pisapia compared her to Magic Johnson, and she’s already over 200 career college assists as a junior — taught Schaplow to stay on her toes on offense.

“Everything was a no-look,” Schaplow said. “I remember… just having to always be ready, because you never knew when she was going to throw you that ball.”

Two seasons after Hansen started fresh with the Vikings, Schaplow faced her own college decision, trying to figure out whether to take a preferred walk-on spot at EWU or go to a Division III school and play big minutes right away. Hansen said the two talked about it briefly, keeping in touch throughout the process.

“I wanted the decision to solely be hers,” Hansen said. “It’s her journey, she’s got to decide on what road she wants to take.”

As it ended up, Schaplow chose the walk-on road that set up last weekend’s matchups.

It was a bit of a throwback to the pair’s beginning together at Roots. Hansen scored 13 and 11 points in the two games, respectively, adding 16 rebounds and 10 assists over the course of the weekend. She’s now scored in double digits in 16 consecutive games and is on pace to hit 1,000 points either late this season or early next year, depending on how many games end up being played. She could also become the first player in PSU history to reach 1,000 points, 500 rebounds, and 400 assists.

Schaplow, barely a month into her first season as a walk-on, has played in five of the Eagles’ six games, including a six-point performance against Seattle U. Last week, though, she played only a handful of minutes off the bench in the first game and didn’t appear in the second.

But that’s not a trend many who know her expect to keep happening for long. Pisapia has already said he expects Schaplow to become a team captain in her time in Cheney, and EWU head coach Wendy Schuller said she’s already beginning to act like one.

“She is somebody that has emerged, even as a freshman,” Schuller said. “She leads, she talks, she knows what she’s doing. She takes care of her teammates, and that means a lot to us.”

In the end, maybe this all just sets up next year’s meeting.

Then, with a decent amount of luck and plenty of social responsibility, there may even be fans at Viking Pavilion, with friends and family making the trip to Portland. Then, they’ll hopefully be able to watch Hansen as she writes her name into the PSU record books, and Schaplow as she builds on experience and starts to emerge as a core player for EWU. Fingers-crossed, Pisapia will get to watch his charges square off again, and after the game they’ll be able to meet in-person.

Hopefully, for the players, the reunion will be more than last weekend’s simple, passive pregame interaction.

Well, not too jovial. And not too much interaction in the moment. After all, there’s always the game left to play.

One hour and 26 minutes.

One day after the 4A/3A Greater St. Helens League announced a more detailed plan for the return of high school sports, the 2A league followed …

A week and a half into the new year, two familiar faces started off their collegiate careers, as the Pacific Lutheran women’s basketball team — featuring Mark Morris and LCC alum Madison Mosier and Kelso’s Aleixis Kleven — went to Seattle for an exhibition against Seattle Pacific, losing 56-51.

Mosier came off the bench for the Lutes and put in 19 minutes, scoring two points and adding a pair of steals, a rebound, and an assist. Kleven did not appear in the game.

Both teams were seeing their first action in over 300 days, and it looked like it early, with SPU and PLU combining for eight turnovers and just six points in the first four minutes. Once the sides started to find their offense, it kicked off a back-and-forth, close first half. Neither team got out to a lead larger than five points in the first half, with SPU taking a four-point advantage into halftime. That lead stretched to as many as nine in the third quarter, but never got into double-digits as the Division III Lutes stuck around with the Division II Falcons on the road.

Hector didn’t get to have his scheduled homecoming Sunday, as the Hornets’ two-game home-and-home series against Portland State was axed due to positive COVID-19 tests in the Sacramento State program.

Should the Hornets get their cases under control, he’ll get to try to add to what’s been a productive first season at the Division I level. In five games, he’s played at least 15 minutes four times. In those four matchups, he’s averaging 8.8 points and 8.3 rebounds per game.

With the Oregon and Washington members of the Cascade Collegiate Conference had to pull out of play in December, the conference pushed its start back to March 1, leaving its two schools in Idaho — Lewis-Clark State and the College of Idaho — to cobble together a schedule as independents in the interim. Saturday, the two started their new slates against each other, and what followed was a one-sided 75-39 drubbing by the Warriors.

Souvenir put up nine points in 21 minutes on a trio of three-pointers, led the Warriors and tied a career high with eight offensive rebounds, and added three assists and a pair of steals.

Lewis-Clark State was supposed to play Whitworth on Tuesday, but that game was canceled when the Pirates had to pause their season due to COVID-19 positive tests.

Through seven games, Souvenir is averaging 8.6 points and 4.3 rebounds, and leads the team with 29 assists.

The Vikings found their footing with a two-game sweep of Sacramento State, winning 66-64 in overtime on Thursday and 74-64 on Saturday.

Hansen led PSU with 21 points and nine rebounds in the first win, then became more a distributor in the second with a team-high five assists to go along with seven points.

EWU stretched its winning streak to four games with a sweep of Weber State in Cheney over the weekend. Schaplow came off the bench for two minutes in the first game — a 78-57 win — and got in the scoring column with a three-pointer in 71-59 Saturday matinee.

She’s currently 5-of-11 on the season from beyond the arc.

The Eagles were supposed to take on Southern Utah this weekend, but those games have already been canceled due to COVID-19 issues in the EWU program.

Speaking of Southern Utah, the Thunderbirds already found a way to rebound from the canceled series against EWU, setting up a pair of home games against Texas Rio Grande Valley.

Daugherty, who led the NWAC in assists as a sophomore at LCC last season and added 9.9 points per game, has started all seven contests for the Thunderbirds thus far. She’s first on the team with 18 assists, and second at 11.4 points per game.

One hour and 26 minutes.

Hansen leads the way with 20, Vikings down Bobcats

After starting out slow in the scoring column, Rainier alum Desirae Hansen turned it on in the second half to keep Montana State at arms’ leng…

Desirae Hansen, left, a product of Rainier High School, is greeted by Kal Schaplow, then a senior at Toledo High School, following a game at Portland State during the 2019-20 season. Last week the former club teammates faced off in a D1 contest when Schaplow and the EWU Eagles came to Portland.

Desirae Hansen and Kal Schaplow enjoy the plush comforts of travel basketball during their days with Roots Academy. These days, the two players are both in the midst of D1 college careers at Portland State and Eastern Washington, respectively.