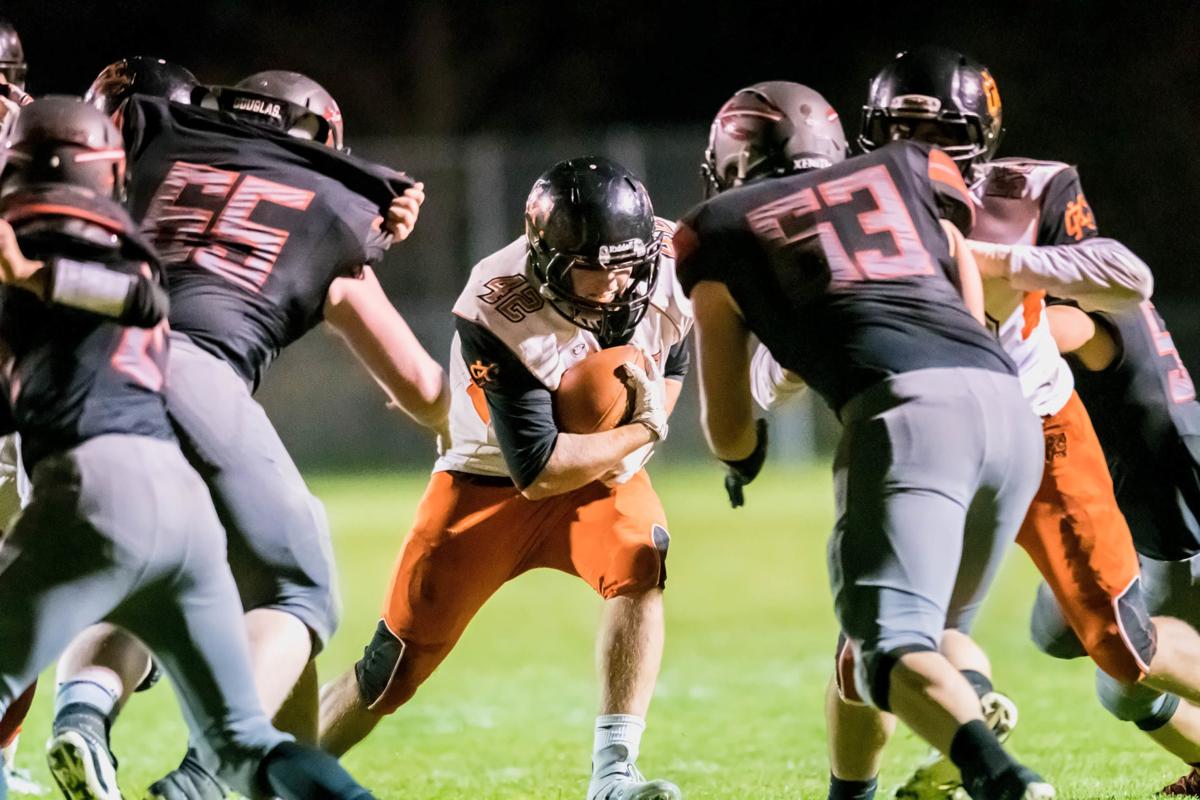 Kalama's Bradey O'Neil (42) hits the hole as Toledo's Michael Echtle (65) and Joshua Quinn (64) both try to close down during Kalama's 42-6 win at Ted Hippi Field on Friday. 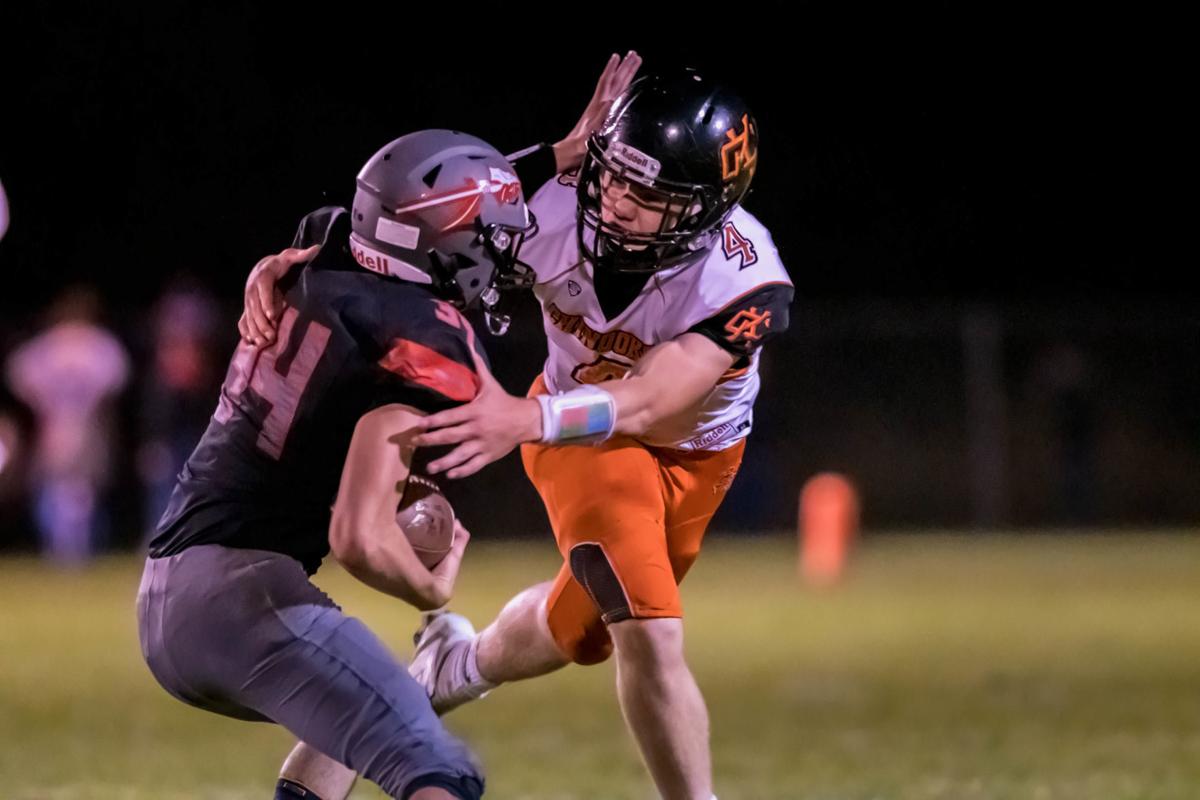 Carlo Arceo-Hansen of Toledo tries to shake attempting tackler Jackson Esary of Kalama during Kalama's 42-6 win over the Indians at Ted Hippi Field on Friday night. 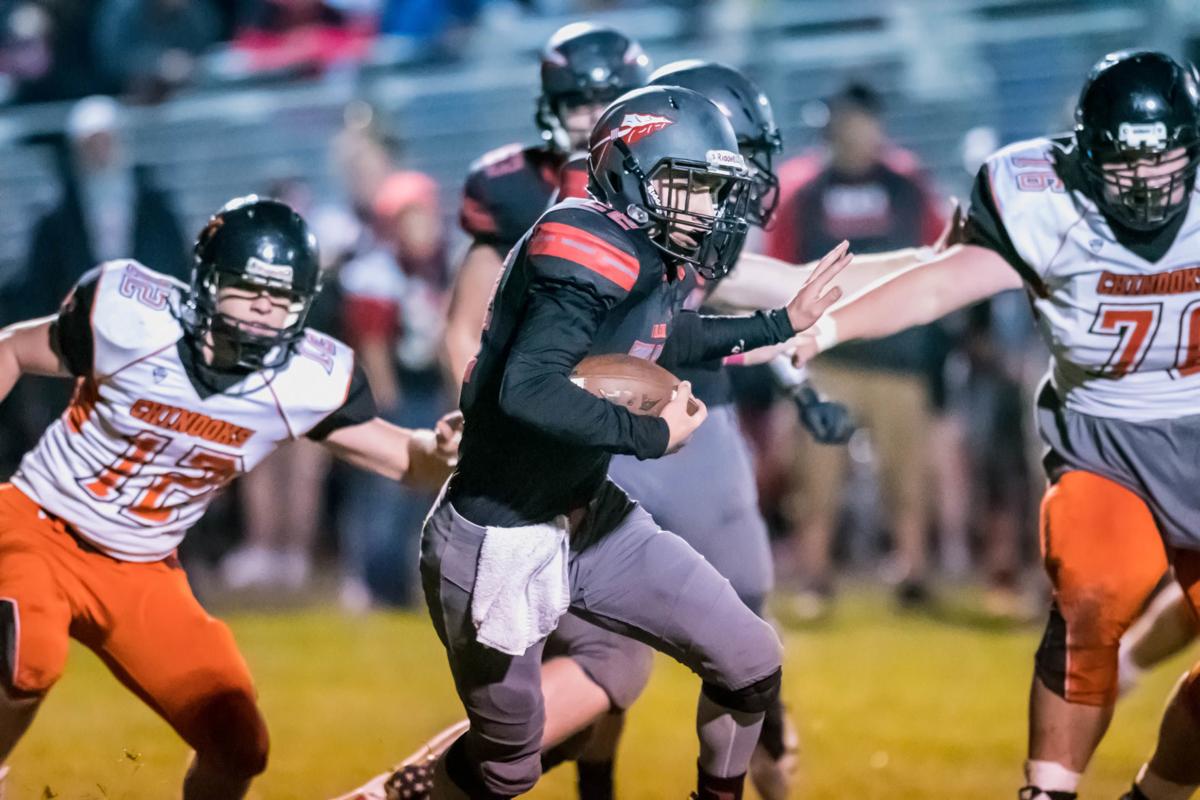 Kalama's Bradey O'Neil (42) hits the hole as Toledo's Michael Echtle (65) and Joshua Quinn (64) both try to close down during Kalama's 42-6 win at Ted Hippi Field on Friday.

Carlo Arceo-Hansen of Toledo tries to shake attempting tackler Jackson Esary of Kalama during Kalama's 42-6 win over the Indians at Ted Hippi Field on Friday night.

Brennon Vance wasn’t sure how he did it. The stadium wasn’t sure, either.

With Kalama leading 35-0, Chinooks sophomore quarterback Jackson Esary running down the sideline from 10 yards out, but Toledo cornerback Miguel Soto was right there and knocked the ball up the in air. Vance, never wavering, found it, kept his feet just in bounds, securing his third touchdown of the night in a 42-6 drubbing of the Indians at Ted Hippi Field on Friday night.

“I gotta be honest, I wasn’t even thinking about (getting my feet in),” Vance said of the catch. “It’s practice. You make a lot of plays in practice. Big-time players make big-time plays. It’s what it comes down to. You gotta clutch up.”

It left people on the sidelines shaking their heads.

Kalama coach Sean McDonald, separated by a whole football field, still wasn’t sure after the game if his stellar senior receiver was actually in bounds. Toledo didn’t think so, but it was ruled a touchdown.

It was a remarkable catch on a play that Soto defended well. He had good inside position and Vance said he didn’t jump as high as he wanted to high-point the ball, and Soto managed to get his hand in there and seemingly break it up.

But Vance has made a name for himself with circus catches. He almost came down with a super impressive catch in the first half, but was just out of bounds. He caught a 35-yard touchdown pass earlier with a full-extension dive. He thinks he can catch everything.

It was a welcome sight for Kalama, who’d missed Vance in recent weeks as he geared back up from missed time due to an illness.

He finished with 10 touches for 145 yards (5-47 rushing, 5-99 receiving) and four total touchdowns (one rushing, three receiving). Elijah Haynes had 46 yards rushing, as well, with a touchdown and Max Cox ran in a 12-yard score with his only carry of the evening.

Having a blow-the-top-off-a-defense receiver who can also run the ball and make highlight-reel catches makes an offense run so much smoother, but also helps bring along a young quarterback, as Kalama is doing.

“He’s got that chemistry with Jackson now and I think you’re gonna see some big things the next few weeks,” McDonald said.

Speaking of Esary, the sophomore is finally starting to look comfortable in the pocket in what is now his sixth varsity game.

He wasn’t bailing when he felt pressure, as he might’ve earlier in the season. He stepped up past the rush, found targets downfield and threw lasers at them. Some were accurate, some were dropped, some were inaccurate. So be it.

But he showed a poise in the pocket that was new and quite encouraging. His 35-yard post route to Vance in the third quarter was as good a ball as he’s thrown all year.

His numbers won’t jump off the page. He was 7-of-17 for 115 yards and three touchdowns, but they will improve as his accuracy does. For now, just the improved pocket presence and calmness was the big story.

“What we’ve really been working on in practice is just getting up in the pocket,” Vance said. “Earlier in the season he felt rushed. I talked to him during the games. He’s rushed, he panics, but tonight — he’s getting passed that.

“It’s tough for a sophomore quarterback to step up like that. He’s doing a great job stepping up in the pocket, like I said, and making those throws.”

Duke Schaplow rushed for 128 yards and a touchdown for Toledo, but 78 of those came on one run that didn’t even result in a score.

Jacob Marley was held to 28 yards on the ground. Trey Rego had just five yards. Carlo Arceo-Hansen had 16 yards and caught Schaplow’s only completion for 27.

McDonald — and Vance — said the Kalama defensive improvement was due to something simple: gap discipline.

“Our D-ends are starting to play really well. Damien Cochran and Ryan Cooney on the outside,” McDonald said. “They’re starting to really learn their jobs and know what to do, and our linebackers are in the right spots now and making the tackles we need them to.

“It’s gap discipline. We’re finally becoming disciplined and owning our own jobs and playing like a family. And that’s what Kalama defense is about.”

At the other end of the field, though, there was considerably less enthusiasm.

Christensen said Kalama was “bigger, faster and stronger than us,” but there were some good things, he said.

Kalama got put into some challenging third-and-longs that it converted, which is both good and bad. Toledo had some shots at interceptions but couldn’t come down with them.

Toledo also moved the ball rather well at times, using its methodical offense to slowly, but surely, progress down the field. But two first-half fumbles — the second spoiling a 10-play drive potential bound of the end zone — were gut punches that Toledo just couldn’t get over.

Toledo, though, has an opportunity to get its ship righted next week when it hosts Wahkiakum.

“Our guys fought hard tonight,” Schaplow said. “You don’t see it, but our linemen are really going after it every single play. And they’re outweighed by a lot, and they’re still going 100 percent.”

Kalama’s schedule sets up nicely for a deep playoff run with just Mossyrock (at home), Wahkiakum (on the road) and Toutle Lake (at home).

“This was the league championship in our eyes,” Vance said.

What kind of Thanksgiving food are you?