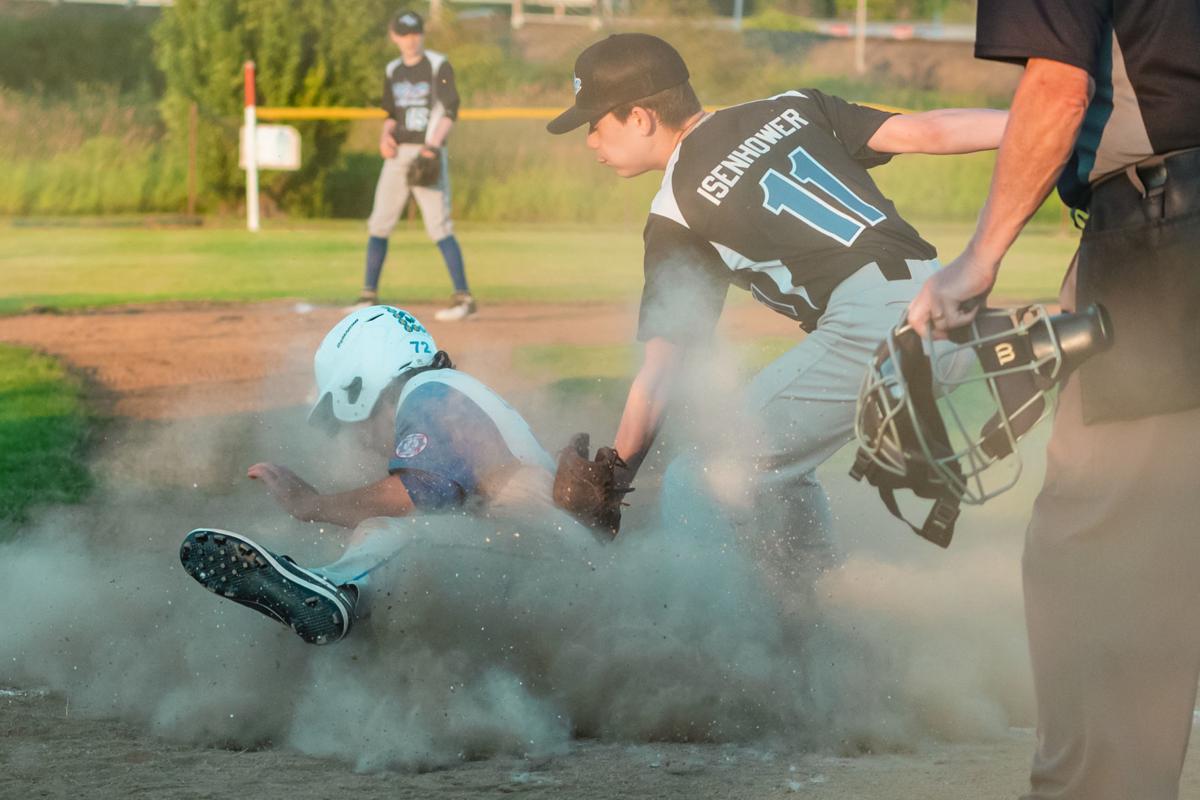 As the dust settles, Kelso's Carter Laberge (72) is called safe at home plate during a game at Stan Hedwall Park in Chehalis, Friday. 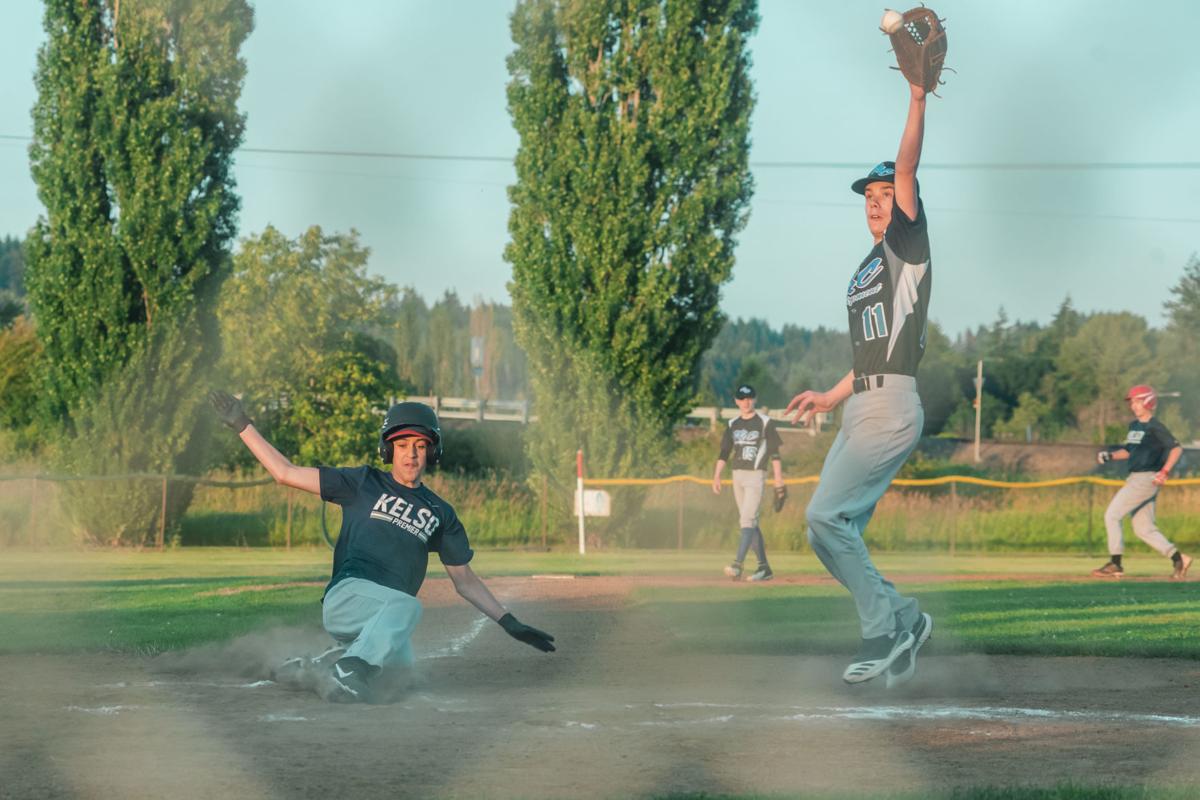 A Kelso player runs around the bases, sliding to the plate during a game in Chehalis, Friday.

Ever since COVID-19 exploded onto the scene like a rainout from hell the boys in blue from Kelso have had plenty of time to think about what to do next.

After their league was put on hiatus back in March it seemed like their Babe Ruth season would inevitably make a return. Someday. It just felt like the natural order.

Then, as the days of inaction turned to weeks turned to months, it seemed maybe baseball would never be back beneath the shadow of the big K on the hill. But when Lewis County and Wahkiakum County went into Phase 3 of the reopening plan back in June it once again seemed inevitable that the kids from Cowlitz County would get their chance to play ball. Finally.

And then came the freeze on phased reopening, a directive from the Governor’s office that put a two week pause on any approval for rule relaxation across the state. After weeks of practicing in small groups and playing catch with their fingers crossed Kelso Babe Ruth was once again stuck in some sort of bullpen purgatory.

On Friday night, though, one team full of Kelso 14- to 16-year-olds broke the months long gameless streak by traveling to Lewis County and downing C&C Development of Twin City Babe Ruth 17-0 in a non-league affair at Stan Hedwall Park.

“We were just working on fielding because that’s been our downfall,” Kelso starting pitcher, Kyler Shellenbarger, said when asked what the focus had been on at practice during the hiatus from game action. “It was stressful sometimes. I just really wanted to be out here.”

In his first time out of the gate Shellenbarger showed no ill effects from any lingering nerves as he struck out six batters in two innings of work and made his defense wait their turn to flash leather.

“My fastball was working the best. I couldn’t really throw my curve so that was about it,” Shellenbarger admitted.

And then the defense was forced to continue to wait for an opportunity to show what they’ve been working on behind the scenes. Because when Landen Patterson took the hill in the third inning he set about striking out three more Twin Cities batters.

In the fourth inning Carter Stenick was the first Kelso pitcher to record an out with the help of a fielder other than the catcher. Like his peers, though, Stenick also notched a strikeout while walks proved to be his only nemesis on the night. Brodie Fizpatrick pitched the fifth and final frame of the ten-run mercy rule abbreviated contest and recorded two more strikeouts in his inning of work.

All told, Kelso pitchers recorded 12 strikeouts, or 80-percent of all their defensive outs. They also surrendered just one hit and allowed only one base runner to advance as far as third base.

“Typically, yes. And our infield is really, really good, too. We’ve just got to wait to see it,” Patterson said. “I was very nervous last night after our first two practices but I’m very happy tonight. They over-performed.”

The Kelso coach noted that his plan was to keep each pitcher at just one inning of work but when Shellenbarger recorded a 12-pitch first inning he decided to roll him back out for three more outs.

“My son was the second pitcher and I wound up wanting to pitch him two innings but I wanted Brodie to finish the game,” Patterson noted.

Kelso put up one run in the first inning and then tacked on four more in the second frame thanks in part to bases clearing double by Eddy Mendez in the 11th spot in the lineup. Mendez later stroked another RBI base hit in the middle of an eight run fourth inning as the Hilanders excelled in the role of rude guests in Chehalis.

Kyler Shellenbarger, Carter Laberge, and Landen Patterson each added a pair of hits to Kelso’s tally.

Kelso will continue to look for games and venues as they feel their way through their long-delayed season and they wait for permission to play games in their home county.

When he entered the R.A. Long football program before the 2009 season Ryan Peerboom was already thinking differently than everyone else.

Hoopers shoot for 'normal' at clinics

Normalcy has been an elusive experience over the last eight months. And sports, that sweet bastion of routine, is often used as a tool to crea…

2A GSHL Pushes Season 1 to Spring

As the dust settles, Kelso's Carter Laberge (72) is called safe at home plate during a game at Stan Hedwall Park in Chehalis, Friday.

A Kelso player runs around the bases, sliding to the plate during a game in Chehalis, Friday.