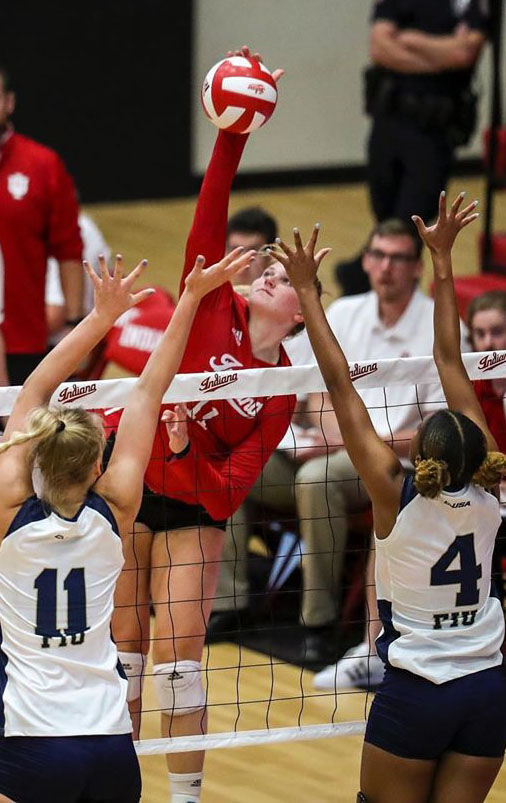 Breana Edwards, a former star at Rainier High School, goes up high for a big hit in a volleyball game for Indiana University during her sophomore season. The Hoosiers are set to begin their season on Saturday. 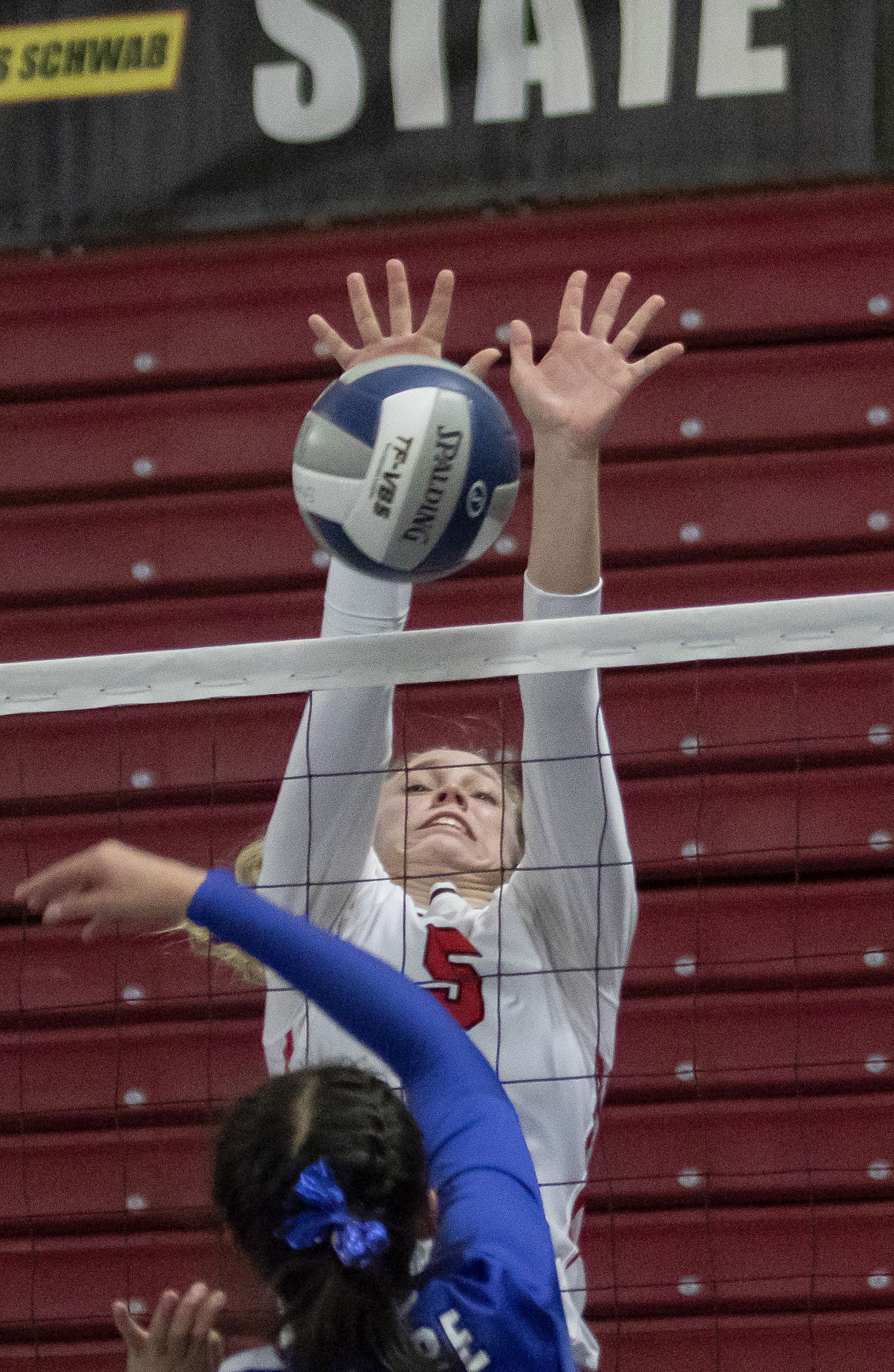 Castle Rock's Logann Golden blocks a shot from Kiona Benton's Elzzy Gonzales during the first round of the State tournament in 2018. Golden is set to play her first college match for WSU on Saturday.

It’s volleyball season in the Big Ten and the Pac-12, and that means area alumni will be get to kick off their belated 2021 seasons this weekend. Add in the start of basketball season in the Division III Northwest Conference and a pair of Big Sky series, and it’s set to be the most crowded weekend slate for local alums in a long, long while.

Indiana didn’t have the best of seasons in 2019, going 3-17 in Big Ten play. But as a sophomore, Edwards turned into the top offensive weapon for the Hoosiers, racking up a team-high 361 kills and finishing ninth in the conference with 3.47 kills per set.

The former Rainier Columbian led Indiana in kills 20 times last season, and set a new single-game record with 39 kills in a Nov. 15, 2019 game against Maryland.

Through two seasons, Edwards has 721 career kills. Even with a shortened junior season in her future, she could find herself nearing the top-20 in Indiana history by the end of this season.

Volleyball’s back on the West Coast as well, and Castle Rock fans will get to watch, or at least read about, a former Rocket start her collegiate career on the Palouse this weekend.

Golden, the 2019 TriCo MVP who also earned All-State and All-Area honors in 2019, split time in high school between playing as an outside hitter and as a defensive specialist. The Cougars currently have her listed as a DS on their roster; she’s one of five underclassmen who will vie for playing time at that spot.

WSU, which finished fifth in the Pac-12 with a very young team in 2019, was recently picked to finish sixth in the conference in the preseason coaches poll.

The Lutes got back on the court last week with an exhibition at Seattle Pacific, but they are set to start the games that matter this weekend with a pair of matchups against Whitman.

It’ll also be the first conference games for a pair of local faces — Kelso’s Alexis Kleven and Mark Morris’ (and LCC’s) Madison Mosier — in PLU uniforms.

Mosier started for the Lutes in their exhibition in Seattle and scored two points in 19 minutes. Kleven did not suit up for unspecified reasons.

Having won three of their past four matchups, the Vikings are back to .500 on the season, and Hansen is a large part of that success. The junior out of Rainier put up 35 points in PSU’s games last weekend against Montana State — her most in a weekend series yet this year — upping her average output to 15.1 points per game, good for fourth in the Big Sky.

EWU had to nix its games last weekend due to COVID-19 issues, with contact tracing keeping too many players out to be able to play. But the Eagles are back this week, and will try to extend the four-game winning streak they were on before their forced pause.

It will also be another chance for Toledo alum Kal Schaplow to get in some minutes in her freshman season. Schaplow’s averaging just over seven minutes per game so far this year, and is 5-for-11 from beyond the arc on the season.

Lewis-Clark State, throwing together a schedule on the fly with the Cascade Collegiate Conference postponing play until March, has had to deal with three straight games getting canceled in the past two weeks. Now, LC is set to take on Seattle Pacific in a two-game series in Seattle.

Souvenir, a Wahkiakum alum, is averaging 8.6 points this season and leads the Warriors with 29 assists. In LC’s Jan. 9 game against the College of Idaho, she filled out the stat sheet with nine points, eight rebounds, three assists, and two steals.

Breana Edwards, a former star at Rainier High School, goes up high for a big hit in a volleyball game for Indiana University during her sophomore season. The Hoosiers are set to begin their season on Saturday.

Castle Rock's Logann Golden blocks a shot from Kiona Benton's Elzzy Gonzales during the first round of the State tournament in 2018. Golden is set to play her first college match for WSU on Saturday.