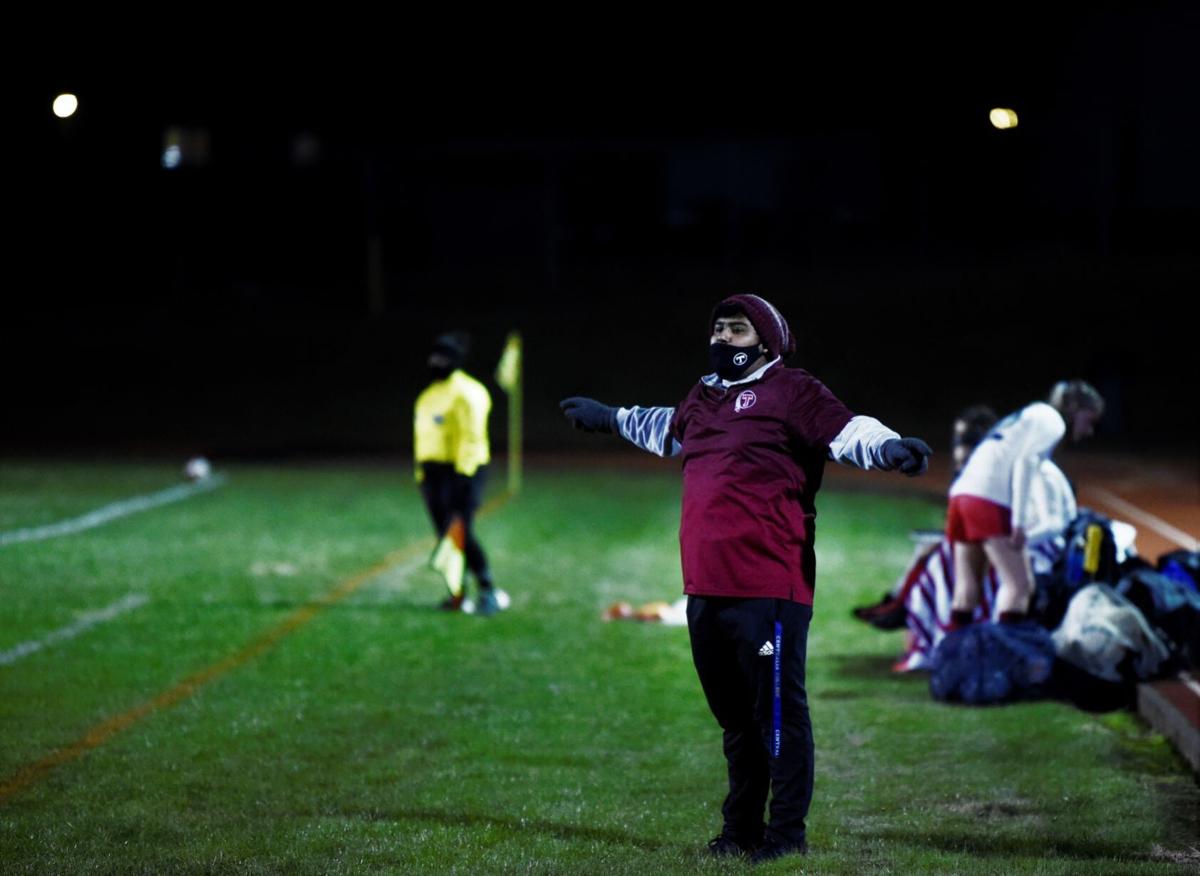 Toledo soccer coach Noel Vasquez conducts his team from the sideline during a game at Winlock, Tuesday, Feb. 10. On Monday, Feb. 22, Toledo went to Toutle Lake and downed the Ducks 8-1. 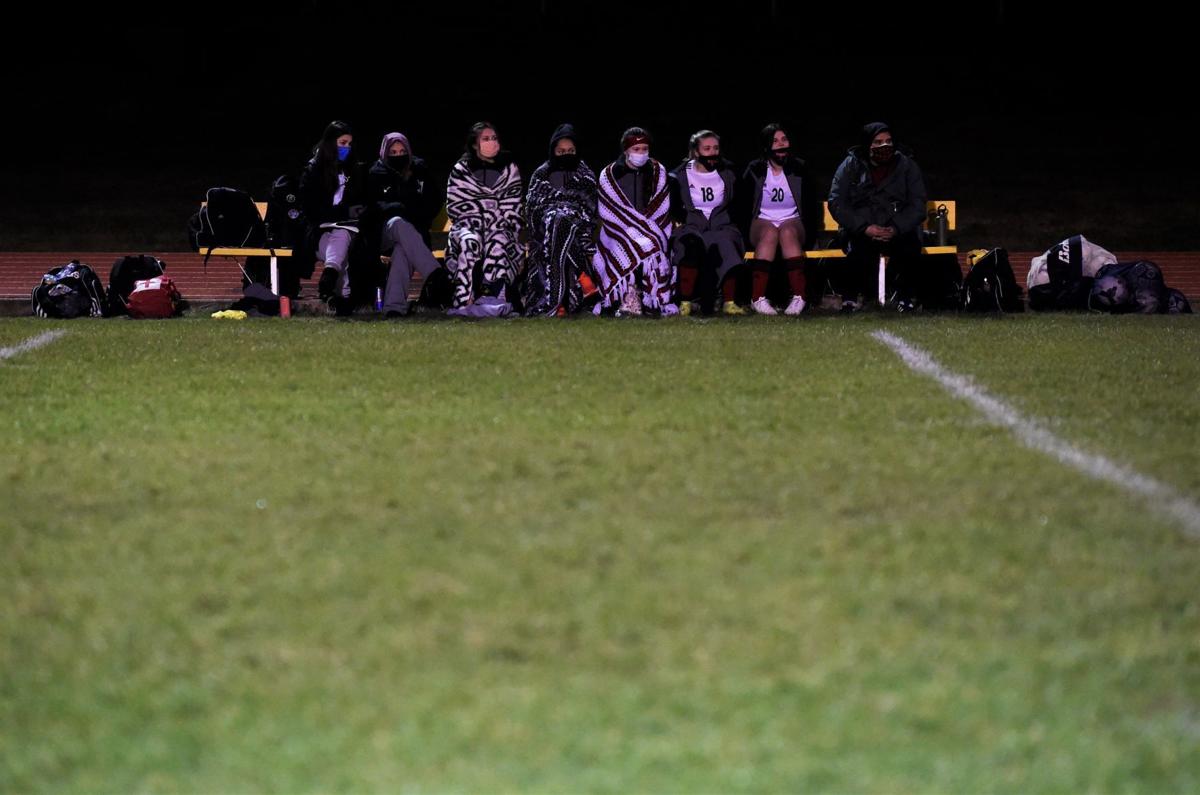 The Toledo soccer team's reserves huddle for warmth during a game at Winlock on Wednesday, Feb. 10. On Monday, Feb. 22, the Indians went to Toutle Lake and racked up an 8-1 win.

TOLEDO — After a one-game slide Toledo got back on track Monday, making quick work of Toutle Lake in an 8-1 mud-covered victory.

Junior midfielder Marina Smith had another big day to lead the Toledo offense, bagging four goals and assisting on three more. She now has seven goals this season.

“She developed a really good kick over the summer,” Toledo coach Noel Vasquez said. “We’re just lucky that people are leaving her with 10 yards, and she takes advantage of the situation.”

That’s exactly what happened in the seventh minute, when Smith fired it home from 20 yards out to get the Indians on the board and the route started.

The score would stay 1-0 for nearly 20 minutes, until Toledo double its lead on a completely opposite style of goal than the first. With the Ducks mounting pressure, junior Jazzy Zarate stole the ball away and took it 40 yards the other way, dribbling past and through Toutle Lake defenders before slotting it past the keeper to make the score 2-0.

Toutle Lake — which only forced three saves out of Toledo sophomore keeper Daphnie Bybee all night — pulled one back in a somewhat controversial manner in the 39th minute.

“The goal was kind of sloppy, a ricochet in the mud,” Vasquiez said. “There were no assistant referees. The girls said it never crossed the line, but the ref called it from his point of view.”

The mud-aided goal cut Toledo's lead in half just before the halftime whistle, but Vasquez said afterward that the sloppy pitch — still dealing with the aftermath of snow melt and Toutle Lake’s Tuesday football game against Wahkiakum — affected the game from start to finish.

“It was one of those games where the mud just slowed down the first half,” Vasquez said. “In the second half, we just went with it. I told the girls, ‘If you’re going to get dirty, you might as well get dirty and go out there and play.’”

Vasquez said that the field was the most torn up between the football hash marks, where most of the action was Tuesday. So instead of drastically changing his possession-oriented strategy, he told his players to stop trying to find gaps down the middle of the field and instead work down the wings and send crosses in toward the goal.

The change paid off quickly, with Smith leading the charge. It started in the 46th minute, with her finding Rose Dillon, who put the ball home to make it 3-1. Five minutes later, Toledo won a corner, Smith swung in a ball that went straight to the head of a darting Keylin Plancarte, and the senior midfielder hammered it into the top corner.

“I can tell you that in the six years I’ve been here at Toledo, I don’t think we’ve ever scored on a header off a corner kick,” Vasquez said.

Three minutes after that, Smith set up Dillon again for Toledo’s third goal — and her third assist — in eight minutes, and the Indians were suddenly up 5-1.

With all of those assists to her name, Smith went back to scoring mode, compiling a second-half hat trick with goals in the 59th, 65th, and 78th minutes.

Toledo (2-1) is scheduled to play Wednesday at Stevenson.

Loggers cut down Kalama in PK’s

ONALASKA — Kalama and Onalaska put their vastly different styles of play on display Monday night and proved that there’s more than one way to skin a cat, especially when that cat is actually a Central 2B League soccer game.

The Chinooks love to work angles and control possession and move around the field in concert. The Loggers like to run, kick and sometimes push. And they like to do all of that as hard as possible.

In their first meeting of the season it was Onalaska that emerged victorious, but it took all of regulation plus stoppage time, a pair of overtime periods, and a full shootout to get there. In the end, Onalaska won the skin for the game by a score of 2-1.

“It was just one of those things, just a crap shoot when you go to PK’s,” Kalama coach Jon Bates said.

Onalaska took a 1-0 lead into the intermission thanks to a goal by Cierra Russ. That deficit left Kalama wondering what in the world was going on as they spun their wheels in the muddy turf in Loggerville.

Indeed, the Chinooks got up more than two dozen shots on the night while the Loggers mustered only two. But, it’s not how many you take that matter, it’s how many you make.

Josie Brandenburg finally knotted the game up at 1-1 with a second half goal that forced the overtime periods. Those five minute “golden goal” overtimes are a sudden death affair, but neither team could manage much to that end so the game moved along to a shootout to determine the winner.

Each team made two shots in the PKs but when a Kalama shot richoted off the frame of the goal the Loggers sank their ensuing shot to claim the win.

Bates tabbed Sophie Given and Brook Milohov as his team’s players of the game.

Kalama is scheduled to host Winlock on Wednesday.

STEVENSON — Cardinals made their way to Stevenson and went right by the Bridge of the Gods without picking up a lick of luck on Monday as they went on to lose to the Bulldogs 6-0 in Central 2B League soccer action.

Stevenson wasted little time in bombarding Winlock, punching in a goal five minutes into the game before the Cards had barely had time to stretch their legs. Another goal just before the intermission gave the Bulldogs a two score lead that would prove to be plenty.

“They knocked it around pretty good,” Winlock coach Brian Ziese said. “They’ve got some pretty quick girls and they used them to their advantage.”

It’s not that Winlock didn't have it’s chances, though.

“Ten minutes into the half we had a girl take a shot and a girl put her hands up to protect herself; and that’s a handball,” Ziese said. “If it gets called you never know how it might change the game. It might have given us some momentum.”

With only 11 girls making the travel for Winlock the Cardinals were without subs for the entire game. As a result, they ran out of gas in the second half and could do little but watch as the Bulldogs rattled off four more goals.

“We’re just banged up. That’s what hurt us,” Ziese said.

Winlock is scheduled to play at Kalama on Wednesday.

Kelso coach Michelle Mury remembers exactly what happened the last time her team faced Camas, even if that matchup was well over a year ago. I…

Putting the 'K' in kickoff: Hilanders return to gridiron under home lights

It’s beginning to feel a little bit different over at Schroeder Field these days.

TOUTLE — There’s a moment in every play and every game where the result suddenly seems inevitable. The arc of the ball, the positioning of res…

BATTLE GROUND — Kelso put their first check mark in the win column on Wednesday with a rapid fire sweep of the Tigers in 3A/4A Greater St. Hel…

Soccer Roundup: Kelso bounces back with win at Battle Ground; Toledo, Kalama win in opposite ways

BATTLE GROUND — The Hilanders decided the best way to bounce back from a shutout loss was to pass the favor along, so that’s what they did wit…

Toledo soccer coach Noel Vasquez conducts his team from the sideline during a game at Winlock, Tuesday, Feb. 10. On Monday, Feb. 22, Toledo went to Toutle Lake and downed the Ducks 8-1.

The Toledo soccer team's reserves huddle for warmth during a game at Winlock on Wednesday, Feb. 10. On Monday, Feb. 22, the Indians went to Toutle Lake and racked up an 8-1 win.