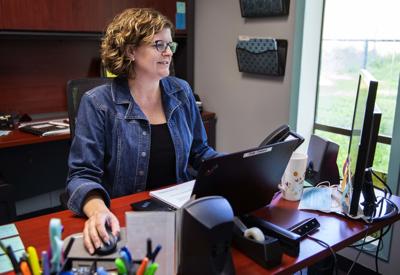 Grass carp to the rescue

The grass carp in Lake Sacajawea have a lot of catch-up eating to do.

Longview’s beloved lake, especially the two segments north of the Hemlock Street footbridge, has become an aquatic forest of Eurasian milfoil. Milfoil, an aggressive grower in shallow, sunlit waters, looks like ropes of parsley. It is an icky sight and obstacle to paddlers. And, if unchecked, milfoil damages the ecosystem by shading out other aquatic plants and inhibiting water flow.

Grass carp are the city’s first line of defense against the weed. The fish are voracious eaters and were first planted in the lake in 1995. As the sterilized fish age and grow they lose their appetite. The city periodically has had to restock the lake to keep the weeds under control.

Unseasonably warm summers, pandemic-related staffing troubles and failure to replenish carp numbers in a timely way allowed the milfoil to spread out of control. The problem has been several years in the making and really got bad in 2020.

Thankfully, the city in May planted an additional 448 carp in the lake for about $8,000. Parks officials say it will be next year before the young studs make a noticeable dent in the milfoil growth. In addition, the city is now working with a consultant to develop an aquatic weed control program to help control milfoil, algae and the lily pads.

The city gets a sideways thumb here because this problem could have been avoided, and because the lake is looking tawdry and swampy these days. For example, a number of fallen trees continue to lie in the lake, and beaver-damaged trees possibly await a similar fate.

The lake is Longview’s most valuable quality-of-life asset, and it needs more attentive care than it has received lately.

Cleaning up this town

Longview parks crews recently spruced up the new rain gardens and planting strips along Tennant Way between 15th and Ninth avenues. We’ve long urged the city to improve the looks of one of its major portals — one visitors to the coast often pass through.

Unfortunately, the plantings had been allowed to become infested with horsetail and other weeds. Apparently, there was some confusion over responsibility for maintaining the plantings — the city or adjacent landowners — until the city assumed it this past summer. City crews pulled the weeds and spread fresh bark, giving the plantings a fresh, clean look.

So, hurrah. Perhaps, however, the city should create a partnership with the landowners to share the upkeep. Those businesses are among the chief beneficiaries of the improvements.

Many idealists have many no sense of reality.

Such is the case with Seattle-area congresswoman Pramila Jayapal and New York U.S. Rep. Alexandria Ocasio-Cortez. They are among a coalition of Democratic progressives who won’t vote for a $1.2 trillion infrastructure package unless Congress also acts on a sweeping $3.5 trillion social safety net expansion.

Both are key parts of President Biden’s agenda. But while the infrastructure bill has bipartisan support and already has passed the Senate, the $3.5 trillion measure is still facing resistance to its cost, including from some Democrats. As of this writing, congressional leaders were still hoping for passage of the infrastructure bill, but progressives’ attempt to hold the bill hostage still jeopardized the measure, which Americans want and have long needed.

Jayapal, Ocasio-Cortez, Vermont U.S. Sen. Bernie Sanders and other progressives may have their hearts in the right place, but they are forgetting that politics is the art of the possible. President Biden, who has had a streak of bad luck and some self-inflicted injuries, badly needs this win.

The progressives say they have already compromised, but their strategy risks snatching defeat from the jaws of victory. This is the type of political gamesmanship that has many voters weary and frustrated, and no doubt both sides are guilty of it.

Voters want more action and less politics. Failure of the infrastructure bill would call into question Democrats’ ability to govern, because their party controls the House, Senate and presidency. Such a perception could haunt them in the 2022 mid-term elections.