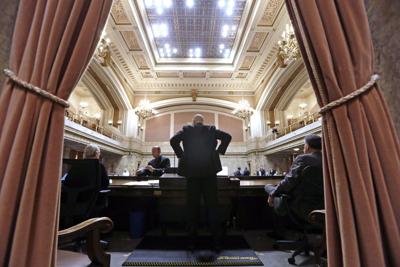 The financial impact of the COVID-19 pandemic will take years to fully understand, but at the moment, the raw numbers strongly suggest Washington’s state government is climbing briskly out of its hole.

The state’s forecasts show 2021-2023 revenue about $1.9 billion above the original expectations. Projected revenue for the current budget cycle is now about $1.3 billion above those expectations. When President Joe Biden signed the latest massive pandemic relief bill into law, he added more than $7 billion directly to the books of Washington’s state and local governments. Separately, the bill also sends hundreds of millions of dollars more to the state for child care and education. On top of that, there is the impact of the $1,400 stimulus checks for individuals, a number that goes up quickly for families with children.

While recovery from this deadly pandemic certainly will be a long and hard process, it appears Olympia has no shortage of cash to fuel the rebuilding. So naturally, Olympia Democrats have decided to attempt a tax increase.

The proposal, which narrowly passed the state Senate earlier this month, calls for a capital gains tax on the sale of assets above $250,000. Gov. Jay Inslee introduced a separate capital-gains tax that would lower the limit to $25,000 for individuals.

It’s a classic example of soak-the-rich tax policy aimed at concentrated wealth. Retirement accounts and sales of homes would be exempt. Mercer Island Democrat and state Rep. Tana Senn promised “the excise tax on extraordinary profits … will impact just 1% of households in our state.”

But by its very nature, such targeting runs afoul of the Washington constitution, which reads: “All taxes shall be uniform upon the same class of property …. The word ‘property’ as used herein shall mean and include everything, whether tangible or intangible, subject to ownership.” Courts have taken this to mean that at its founding, Washington forever denied itself the power to impose a graduated income tax. Income is property. The state cannot soak only the rich; it must soak everyone uniformly.

The state’s lawyers may think they have a way to torture the language until income no longer is considered property, despite the Washington constitution clearly stating it is. But there also is the obstacle of the statewide referendum an income tax likely would face, as it has several times in the past.

So why does the Democratic majority in Olympia want to impose this new tax? In the midst of crisis, why spend time and political capital going after money the state doesn’t immediately need, money the courts have said it can’t have, and money the voters have repeatedly declined to let it take?

This tax is not really about fixing economic damage from the pandemic. Gov. Inslee proposed something similar in his 2019-2021 budget, before there was any damage to fix in the first place. The real motivation is a moral one: the desire to fix Washington’s regressive tax structure. In the minds of the Democrats who back these new taxes, and many others like them over the years, this is a quest for moral virtue, a repenting of our financial sins.

Washington’s tax code doesn’t make it easy to be poor or even middle class. Sales taxes on daily necessities make it hard to raise a family. Business and occupation taxes crush small businesses. It’s hard to imagine a more regressive tax than the 49 cents we currently pay to Olympia for every gallon of gasoline. Perversely, even the sin taxes we impose on cigarettes and alcohol land cruelly on those in need of help.

The way Washington handles its money puts a heavy burden on people who live on the edge of financial survival — people for whom the difference between a $100 car tab and a $30 car tab is a meaningful one. If Democrats were to use their majority power to lighten that load, it would be a moral quest worth pursuit.

But this quest is a wholly elite-oriented concept. One group of elites in Olympia wants to cajole another group of elites in the courts to allow it to take hundreds of millions of dollars it doesn’t need from a third set of elites: the tech, business, and real-estate winners. As a result, when the elites who run NGOs and think tanks publish their report cards on which states have the worst problems with inequality, the elites in Olympia will get a better grade. Then, presumably, they will take their salaries, paid for out of tax dollars, and celebrate their success in fancy restaurants owned by some of the same people they imposed this capital-gains tax on in the first place.

The entire thought process behind this tax proposal is empty of concern for the people who are made to pay too much. Yes, taking that $500 million or $1 billion away from tech geniuses and their landlords will improve our standing on think-tank equality report cards. But nothing about this bill requires the money to be spent cleaning up the ugly aspects of our tax code.

This bill is designed not to assist the many, but to salve the conscience of a few. Indeed, the few seem to think we’re the ones not doing our fair share. This January, Democrats in the state house introduced a bill to hike our gas tax to 67.4 cents a gallon, which would send it past California’s and give us the title of worst in the nation. If you’re fortunate enough to be able to own an expensive hybrid or electric car, that probably sounds like a great idea, too.