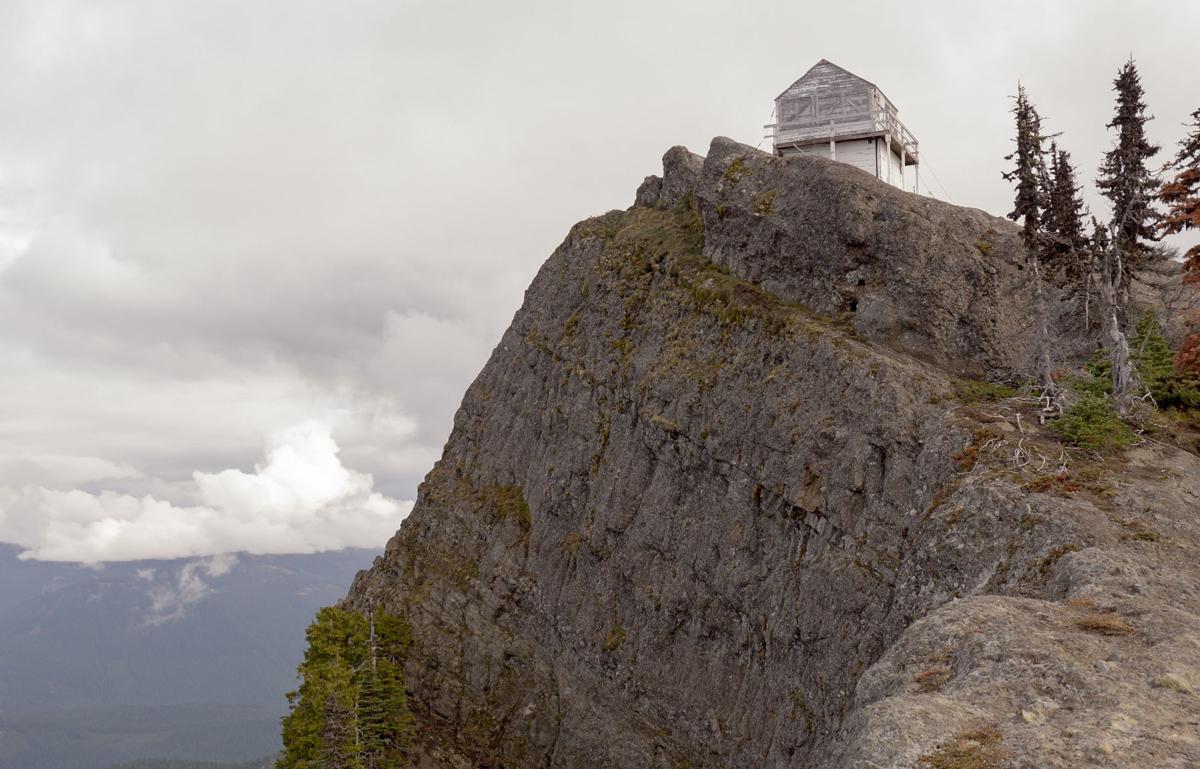 High Rock Lookout stands on a tall peak in the Gifford Pinchot National Forest. Volunteers from the White Pass Country Historical Society have partnered with the Forest Service to stabilize and rehabilitate the historic building. 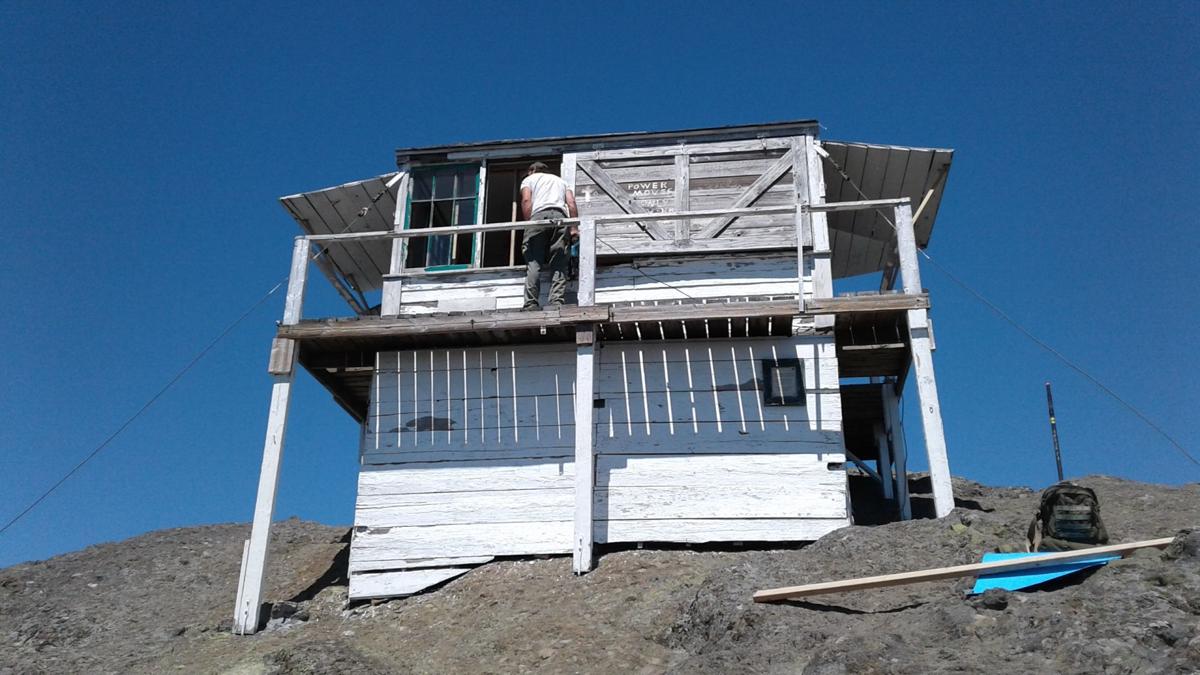 A volunteer helps restore High Rock Lookout in the Gifford Pinchot National Forest. The historic fire lookout was built in the 1930s.

Perched on the edge of a steep rock bluff in the Gifford Pinchot National Forest, the High Rock Lookout is a historical building that shows its age.

Recently, the 90-year-old building has been getting a facelift, and the next two years of work will be instrumental in preserving it, according to U.S. Forest Service officials.

Built between 1930 and 1931 about 10 air miles north of Randle, the lookout was part of a chain of towers used to spot fires. Last staffed in 2002, it is one of the last lookouts left in the forest and was minimally maintained by volunteers, according to Matt Mawhirter, a Forest Service Heritage Program coordinator.

After decades of harsh weather and vandalism, the Forest Service, White Pass Country Historical Society and Sand Mountain Society partnered to stabilize and restore the building starting in 2014.

Martha Garoutte, treasurer for the historical society, said the society got involved because it had previously worked with the Forest Service to restore the La Wis Wis Guard Station.

“At that time it was preservation to keep it from tumbling down,” Garoutte said. “Now we’ve changed the focus to totally restoring it.”

This year, the work will focus on smaller structural repairs and removing graffiti.

Next year, the Sand Mountain Society, which specializes in fire tower restoration, will take the entire structure apart to address dry rot and then reassemble the building, Mawhirter said. And they will replace some windows and repair damaged siding. Any original siding that is too damaged will be replaced with siding Sand Mountain Society reclaimed from houses built in the same period.

For that project, a helicopter will be used to transport the siding and other building materials to the top of the peak, Mawhirter said, as the only other option is to carry the materials in on the 1.6 mile trail.

“It’s an old trail so it’s pretty steep,” Mawhirter said. “Last year we did pretty good work on one wall that was falling down. We hiked in windows and all the materials, and that’s what takes forever.”

Garoutte added that another challenge is the limited space on the peak and the short working season.

“It’s on a rock hanging out into the middle of nowhere, so there’s not a lot of space to work on,” Garoutte said. “It’s only accessible from the middle of June to September because of snow. And when there’s no snow, there are tourists.”

The original preservation work was funded by a 2015 Valerie Sivinski Washington Preserves Fund grant for $2,000, but Garoutte said that only “scratched the surface” of what the building needed. Now the restoration, helicopter included, is funded by community donations, and the work is done by volunteers. The trail has remained open during repairs.

Community donations have amassed roughly $25,000 of the estimated $50,000 needed to complete the repairs, according to Garoutte. If they raise more money, whatever funds are not used on the restoration will be earmarked for future repairs and maintenance.

The restoration is expected to be completed by 2021, Mawhirter said, and then volunteers will staff the lookout in the summer to provide visitor information. Garoutte said last year over 3,000 people visited the lookout.

How to support restoration efforts

They can also go online at www.paypal.me/highrockrestoration.

French President Macron: No blank checks will be given

Millions in US face eviction amid COVID-19 crisis

Millions in US face eviction amid COVID-19 crisis

High Rock Lookout stands on a tall peak in the Gifford Pinchot National Forest. Volunteers from the White Pass Country Historical Society have partnered with the Forest Service to stabilize and rehabilitate the historic building.

A volunteer helps restore High Rock Lookout in the Gifford Pinchot National Forest. The historic fire lookout was built in the 1930s.