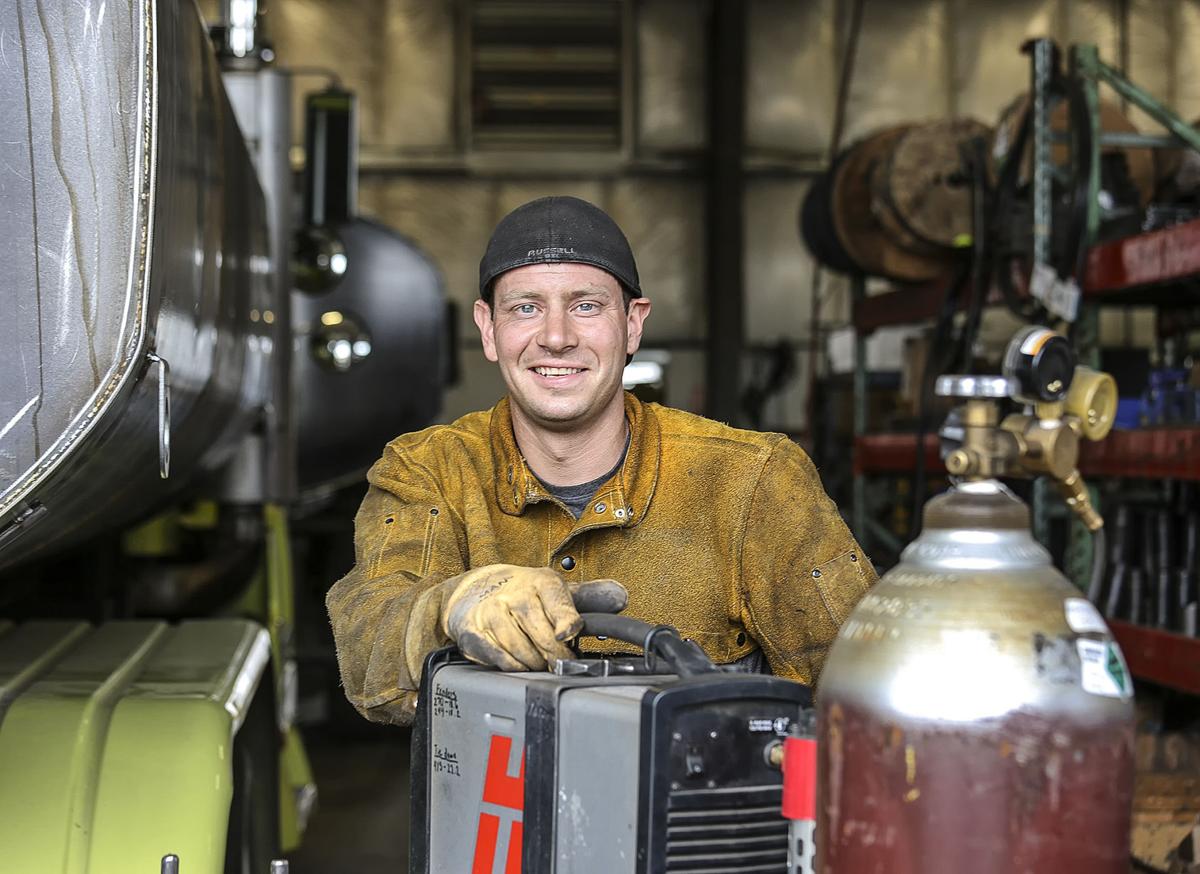 James Piel has advanced from his entry level job to welding since Randy Salvig hired him at Randco. 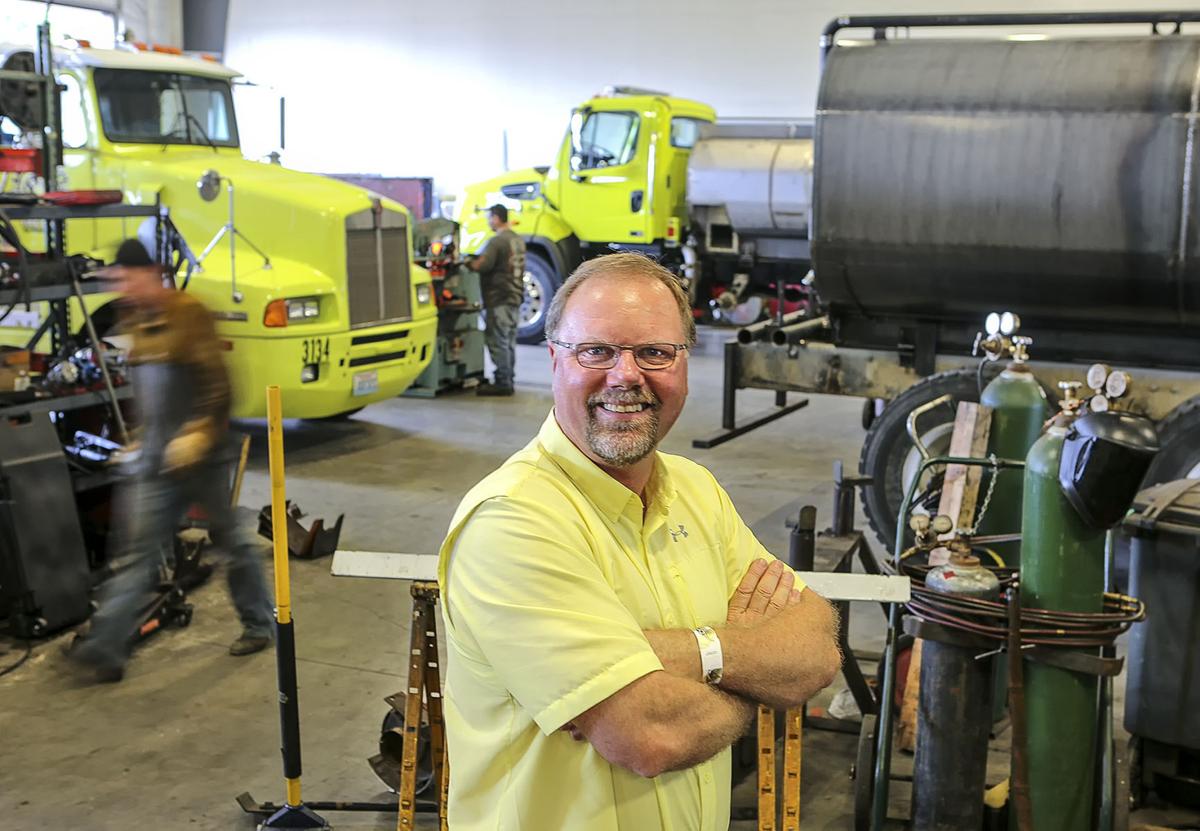 Randco president Randy Salvig doesn't say he can make other people turn over a new leaf and clean up their lives. But if someone is ready, and has the other qualifications, Salvig is willing to give a job to help make the second chance work.

Most business owners wouldn’t blink before tossing out an application from someone with a history of drug abuse. Not Randy Salvig.

“It’s like rescuing a dog or cat out there. I don’t find them, they find me,” the 54-year-old chuckled.

The owner of Randco Tanks, a Kelso water tank manufacturer, estimates that all but two of his 18 employees have used drugs at some point their lives, even if they weren’t all addicts.

“I think, being a businessperson, I like people achieving things in life,” he said. “When it comes to people, they come in as a laborer and the next they know, they’re a welder, and they’re constantly achieving their dreams, climbing up the ladder. … I gravitate toward that type of personality.”

Salvig may be exceptional in his willingness to absorb drug-troubled people back into the workforce, and by example he shows how important a role employers can have in reforming abusers. But keeping workplaces drug-free is a massive and expensive challenge for businesses here and nationwide, and it’s becoming further muddled by marijuana legalization.

Businesses shell out hundreds of millions in an attempt to prevent lost productivity, absenteeism and injuries due to drug use.

“People that are doing drugs are not thinking about what your need is as an employer,” said Marcus Cloke, an administrator for Another Option Inc. in Kelso. “They’re focusing on what they’re dealing with.”

Drug abuse put an estimated $193 billion drag on the U.S. economy in 2007, according to a U.S. Department of Justice study. (That would be $222 billion today if adjusted for inflation.)

The biggest chunk of those costs isn’t for health care or law enforcement. It’s for lost productivity. That includes household and job productivity; absent or distracted workers; and unrealized productivity of people who aren’t working because they’re getting medical treatment or are incarcerated because of drug-related crimes.

James Piel, 31, was one of those people. He “didn’t really have a work history” when he first injected a heroin-filled needle into his arm five years ago.

Piel was introduced to oxycodone in 2006 when had testicular cancer. He went into remission for four years, but he kept crushing painkillers to snort for a high. When he developed cancer again in 2010, drug manufacturers had swapped out the old pills for harder-to-crush ones, intending to prevent abuse. Instead of quitting, Piel, like many other addicts, switched to heroin. At the time he was working for a refrigeration manufacturer, but it wasn’t long before his sense of normalcy slipped.

“You can only maintain for so long before it catches up to you,” Piel said. “I couldn’t show up to work. … If you don’t have the drug, you’re sick. You can’t get up, your body hurts,”

Last year he was sentenced to 19 months in prison after burglarizing a Vancouver home and was convicted of first-degree criminal trespassing, possession of heroin, second-degree possession and trafficking of stolen property, third-degree theft and forgery.

Piel said prison gave him a chance to do what he had wanted to do for years — get sober.

“I had tried to get clean before, but it was always for the wrong reason,” he said. “It was to make my daughter’s mom happy. I finally became ready to do it for myself.”

Piel served the last six months of his sentence in Longview Work Release, a transitional, work-oriented facility for offenders. After applying to more than 100 places for a job, Piel landed a job with Randco Tanks as a temporary laborer. He practiced welding early before work, and he was promoted to welder about two months ago.

Salvig’s son-in-law took Piel on a kayaking trip to celebrate after he finished work release in early June. Piel now lives in Longview’s Oxford House, a transition house for men, and has to attend chemical dependency treatments and report to a Department of Correction parole officer.

Working, staying busy and attending Narcotics Anonymous are all keys to his sobriety, Piel said.

But not everyone is as successful.

When the economic crisis hit in 2008, Randco Tanks laid off 15 to 20 people, including a recovering alcoholic.

“He got his little coin from going through Alcoholics Anonymous. Then, I found out he relapsed,” Salvig said. “So I do take the weight of that, because I feel bad that he lost his job and I had to make that decision. He got severely upset at me.”

About six months ago, one recovering addict missed a few work days, at a cost of about $500 a day per a day in lost productivity, Salvig said. The welder was fired after he continued to make mistakes. Recently, Salvig heard he had disappeared with a friend’s stolen credit card and car he received as a gift for recovery.

The cost of business

Another Option Inc., which provides support services for adults with disabilities in Longview, realized it had a workplace drug problem in 2000. An employee left a dirty spoon, a telling sign of heroin use, in the bathroom of one of his client’s homes.

Since then, Another Option adopted four levels of drug testing for its 175 employees. Top level supervisors take a substance abuse training course from PeaceHealth.

PeaceHealth drug screenings cost about $35 to $60 per person, depending on what’s tested. But the costs of tests actually are higher, because legally, an employee suspected of using drugs has to be escorted by another employee, said Rhonda Gonzales, drug screen coordinator for PeaceHealth. The employer must pay for both employees’ time and travel.

“Everything has a cost to it,” said Cloke, the Another Option administrator. “You might call it the cost of doing business, but we’re doing this to try to keep a safe, healthy environment for our clients and our team.”

John Schapman, supervisor of occupational health at PeaceHealth, argues that proactive drug policies like Cloke’s will likely save businesses money in the long run.

“It helps filter out individuals that might get into the system, and once they become an employee there’s a tremendous cost,” Schapman said.

While Another Option has a zero tolerance policy, other local companies’ policies are more nuanced.

Both Emerald Kalama Chemical and KapStone Paper and Packaging Corp. said an employee could be fired, disciplined or put on “last chance” probationary period, depending on the situation. Both offer confidential substance abuse counseling and medical leave. Employees on painkillers could be given modified tasks.

The companies also offer safety training and wellness programs emphasizing a healthy lifestyle. Emerald estimates it spends about $250 per a person for pre-employment drug screenings and physical exams.

Regulating drug use in the workplace has become more complicated since voters legalized recreational marijuana in 2012.

Despite the step, most employers still prohibit workers from using pot. But more workers are lighting up. In 2013, the number of Washington workers testing positive for marijuana grew by 23 percent — continuing a trend that started before legalization — according to Quest Diagnostics, a national chain of clinical diagnostic labs.

Privacy advocates argue employers shouldn’t police off-the-job, legal marijuana use. THC — the chemical that creates a marijuana buzz —lingers in the system for up to two weeks. So it’s possible to test positive without showing signs of impairment.

“Why should it matter to my employer that I have a joint on the weekend when I’m not working? That will appear on the drug test and the vodka I drank will not,” said David Klunder, privacy counsel with American Civil Liberties Union of Washington. “It’s just getting into private, employee, off-the-job matters which are none of the employer’s business.”

Many employers, though, say they’ll continue to ban pot, which remains illegal under federal law.

“Alcohol is legal, too, but you can’t show up to work wasted. The harder part with marijuana is there’s not a designated threshold to state you’re under the influence, as there is with alcohol,” said Linda Haensel, human resource specialist at Emerald Kalama Chemical. “So a lot of employers are just saying if there’s a presence of the drug (in your system) we’re going to treat it as you’re violating our substance policy.” That includes medical marijuana in most cases, too.

Salvig says that preventing drugs in the workplace starts with knowing your employees and recognizing their accomplishments.

“We all have the power within us to change the direction in life. … When you get to people like James (Piel) who say they need help, and they really want it, and they achieve beyond what you ever thought was possible,” Salvig said. “You know, I’m a coach on the sidelines saying ‘go, go, go.’ Everyone has ability to go, go, go.”

Cheney: Jan 6 probe is not a 'political campaign'

Cheney: Jan 6 probe is not a 'political campaign'

Searching for the fix: Solutions to Cowlitz County's drug problem

Jane loves her family and wants to find a good job to support them.

How effective is drug testing?

Employment-related drug testing is a $2 billion industry in the U.S. But does it reduce drug use and promote workplace safety?

James Piel has advanced from his entry level job to welding since Randy Salvig hired him at Randco.

Randco president Randy Salvig doesn't say he can make other people turn over a new leaf and clean up their lives. But if someone is ready, and has the other qualifications, Salvig is willing to give a job to help make the second chance work.