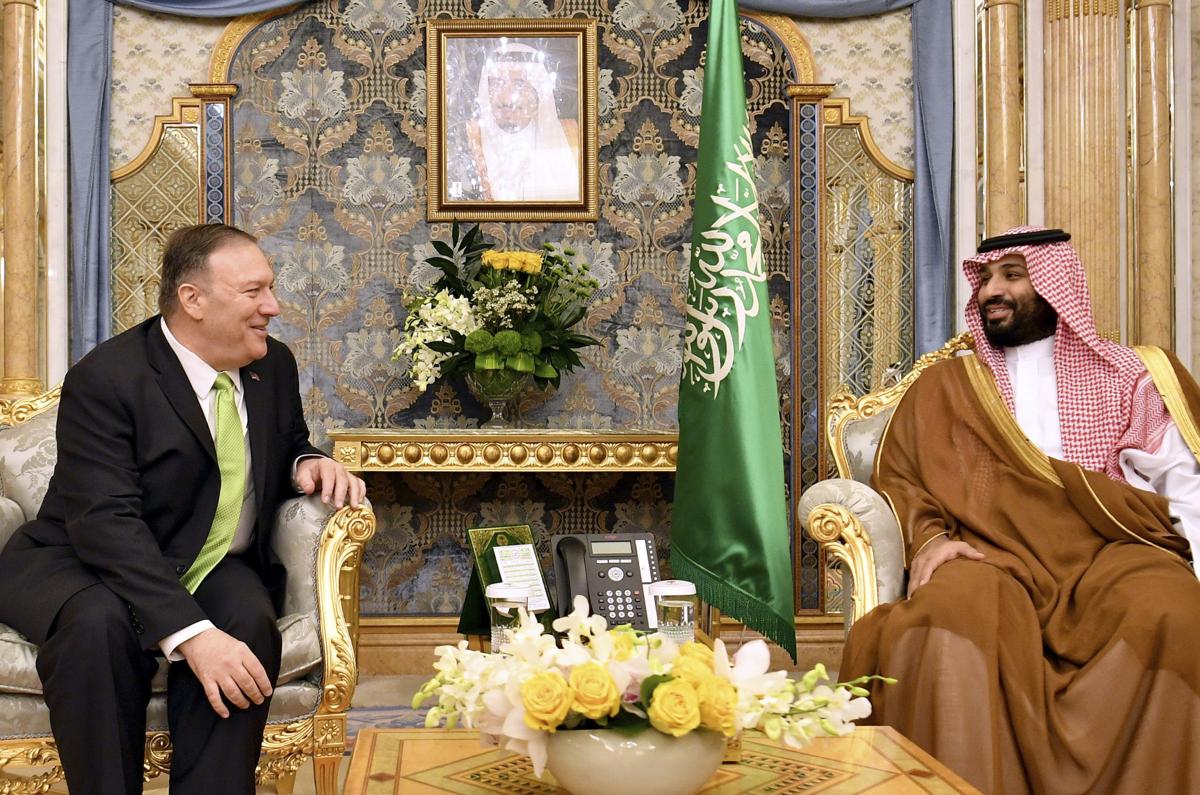 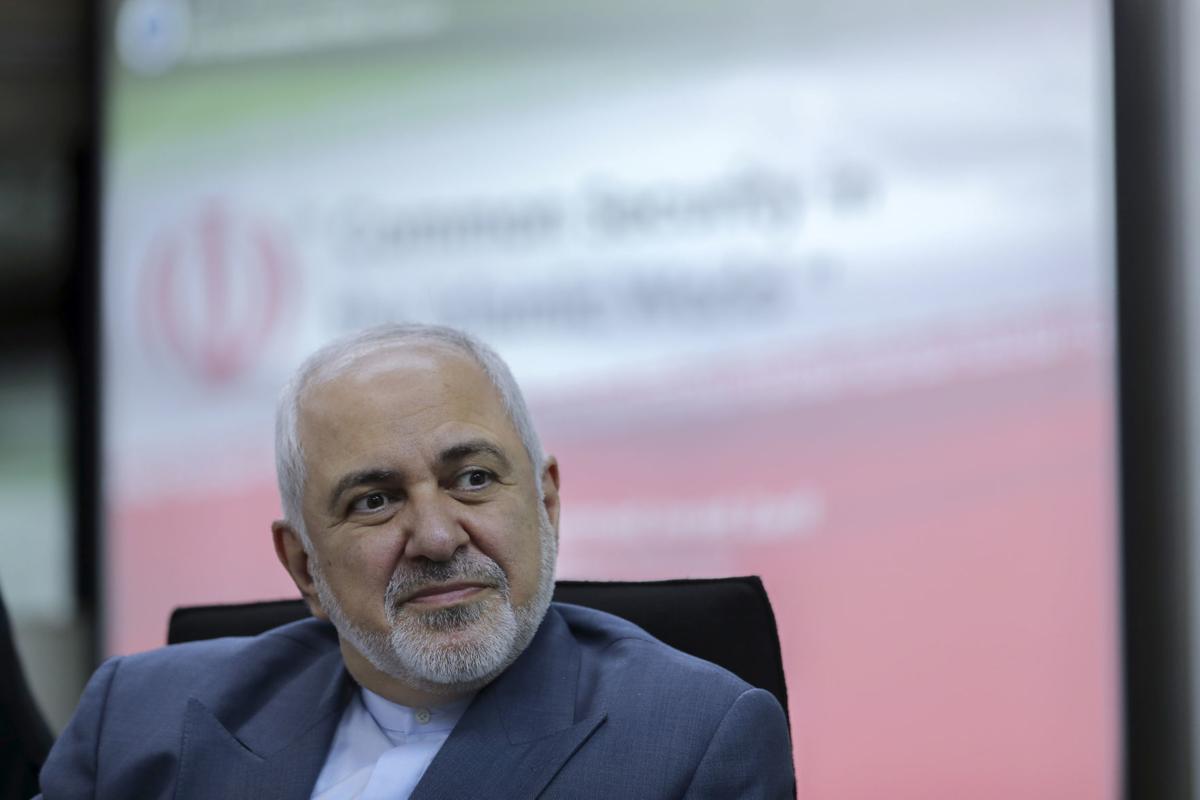 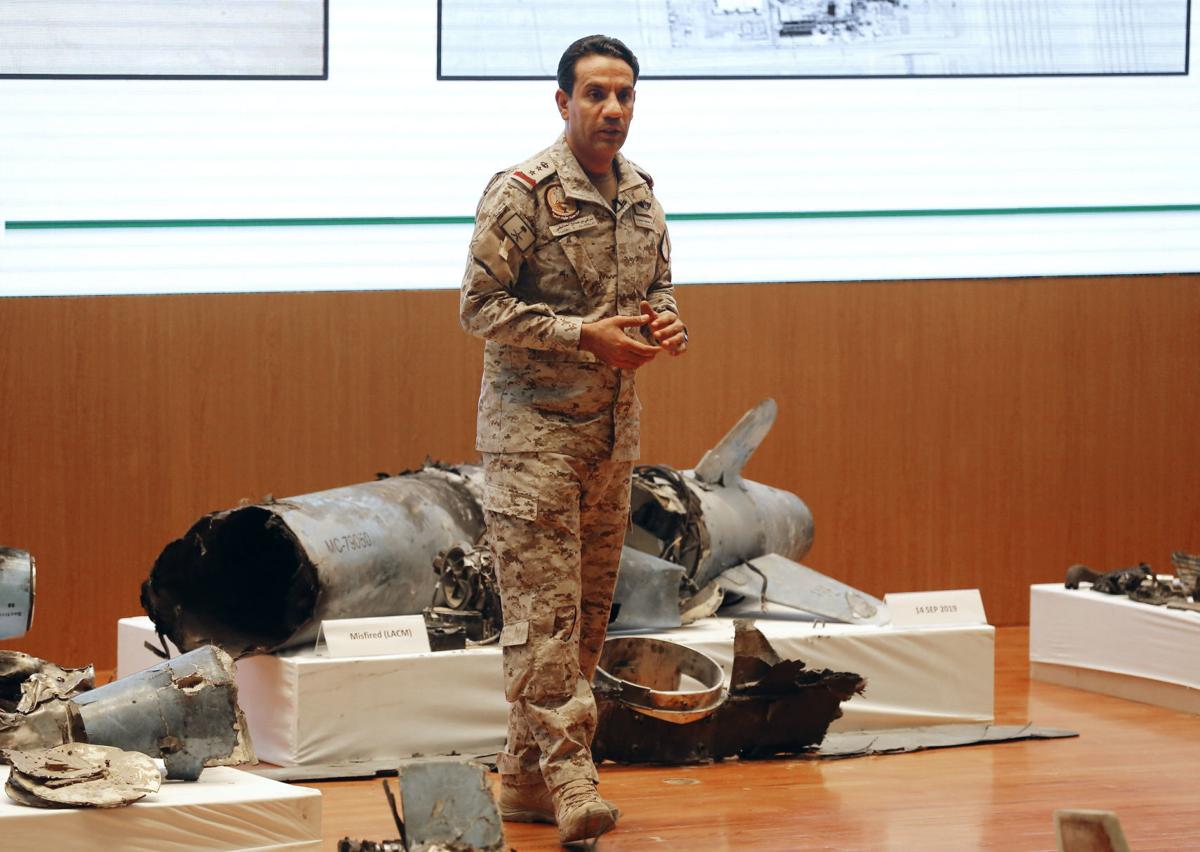 Saudi military spokesman Col. Turki al-Malki displays what he describes as an Iranian cruise missile and drones used in an attack this weekend that targeted the heart of Saudi Arabia's oil industry, during a press conference in Riyadh, Saudi Arabia, Wednesday, Sept. 18, 2019. Though Yemen's Houthi rebels claimed the assault, the U.S. alleges Iran was behind it. (AP Photo/Amr Nabil) 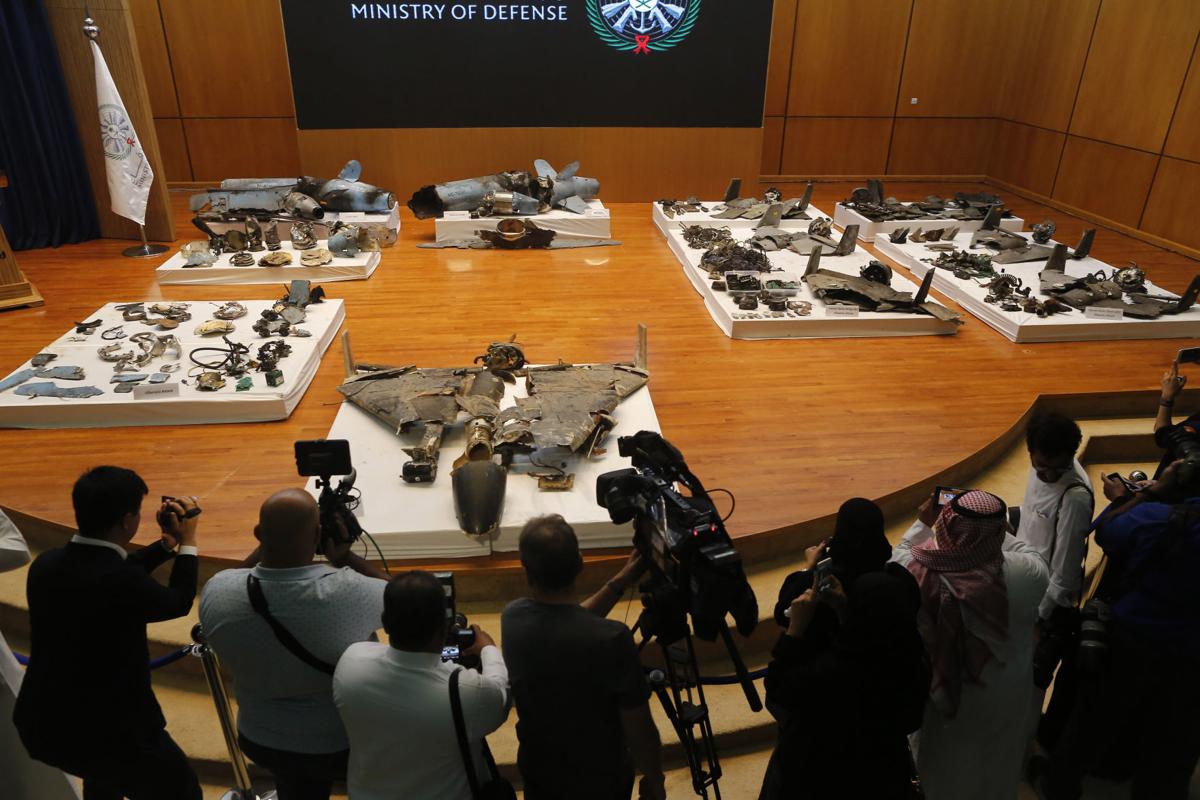 DUBAI, United Arab Emirates — Iran's top diplomat said Thursday that any attack on his country over a drone-and-missile strike on Saudi Arabia's oil industry will result in "all-out war," further pushing up tensions across the Persian Gulf.

The comments by Foreign Minister Mohammad Javad Zarif represented the starkest warning yet by Iran in a long summer of mysterious attacks and incidents following the collapse of Iran's 2015 nuclear deal with world powers, more than a year after President Donald Trump unilaterally withdrew the U.S. from the accord.

Zarif's comments also appeared to be a response to U.S. Secretary of State Mike Pompeo, who a day earlier while traveling to Saudi Arabia referred to Saturday's attack as an "act of war."

Asked by CNN what would be the consequence of a U.S. or Saudi strike, Zarif said: "All-out war."

It would cause "a lot of casualties," he stressed.

"I am making a very serious statement that we don't want to engage in a military confrontation," Zarif said. "But we won't blink to defend our territory."

He added that any sanctions placed by the U.S. on Iran after pulling out of the nuclear deal would need to be lifted before any negotiations could be considered.

"They've done whatever they could and they haven't been able to bring us to our knees," Zarif said.

Pompeo, who had just arrived to the United Arab Emirates, did not immediately respond. He met earlier in the day with Saudi Crown Prince Mohammed bin Salman in Jiddah about the attack on a crucial oil processing facility and oil field, which cut the kingdom's oil production in half. Yemen's Iranian-backed Houthi rebels have claimed the attack, but the U.S. alleges Iran carried out the assault.

"The U.S. stands with #SaudiArabia and supports its right to defend itself," Pompeo tweeted. "The Iranian regime's threatening behavior will not be tolerated."

Pompeo did not elaborate. Trump has been noncommittal on whether he would order U.S. military retaliation. He said separately Wednesday that he is moving to increase financial sanctions on Tehran over the attack, without elaborating. Iran already is subject to a crushing American sanctions program targeting its crucial oil industry.

Pompeo met Abu Dhabi's powerful crown prince, Sheikh Mohammed bin Zayed Al Nahyan. The UAE is a close ally of Saudi Arabia and joined the kingdom in its war with the Houthi rebels in Yemen. The 4-year-old war has killed tens of thousands of people and destroyed much of the country, with millions more driven from their homes and thrown into near starvation.

The UAE said Thursday it had joined a U.S.-led coalition to protect waterways across the Middle East after the attack in Saudi Arabia.

The state-run WAM news agency quoted Salem al-Zaabi of the Emirati Foreign Ministry as saying the UAE joined the coalition to "ensure global energy security and the continued flow of energy supplies to the global economy."

Pompeo tweeted his appreciation for the UAE and Saudi Arabia joining the coalition.

"Recent events underscore the importance of protecting global commerce and freedom of navigation," he wrote.

The U.S. formed the coalition after attacks on oil tankers that Washington blamed on Tehran, as well as Iran's seizure of tankers in the region. Iran denies being behind the tanker explosions, although the attacks came after Tehran threatened to stop oil exports from the Persian Gulf.

Iraq said it would not join the coalition. The government in Baghdad, which is allied with both Iran and the U.S., has tried to keep a neutral stance amid the tensions.

At a news conference Wednesday, the Saudis displayed broken and burned drones and pieces of a cruise missile that military spokesman Col. Turki Al-Malki identified as Iranian weapons collected after the attack. He also played surveillance video that he said showed a drone coming in from the north. Yemen is to the south of Saudi Arabia.

Eighteen drones and seven cruise missiles were launched in the assault, Al-Malki said, with three missiles failing to hit their targets. He said the cruise missiles had a range of 700 kilometers (435 miles), meaning they could not have been fired from inside Yemen. That opinion was shared by weapons experts who spoke to The Associated Press.

"This is the kind of weapon the Iranian regime and the Iranian IRGC are using against the civilian object and facilities infrastructure," Al-Malki said, referring to Iran's Revolutionary Guard.

He added: "This attack did not originate from Yemen, despite Iran's best effort to make it appear so."

"This is not very credible, relatively speaking," he told CNews television. "But we sent our experts to have our own vision of things."

Despite President Donald Trump's sharp criticism, federal guidelines for reopening schools are not being revised, the head of the CDC said today.

Virus briefing: These 9 charts track COVID-19's resurging spread in our state and nation

Across the country, more than half the states face rising cases, with some state and local leaders divided over what to do next. See how our state ranks. Plus, get the surgeon general's take on masks.

The teacher jailed for raping a student she would later marry has died at age 58. Get caught up on all the morning's news.

The United States saw a record number of 60,021 new cases Tuesday as overall cases in the country near 3 million.

The high court on Wednesday said 7-2 the administration acted properly when it allowed more employers who cite a religious or moral objection to opt out.

Coronavirus update: How the Catholic Church won $1.4B in virus aid; Starbucks to require masks

The global religious institution with more than a billion followers is among the biggest winners in the U.S. government’s pandemic relief efforts. Get caught up here.

The Trump administration has formally notified the United Nations of its withdrawal from the WHO, although the pullout won’t take effect until next year.

The actress' young son was found alone on a boat. Get caught up with the latest headlines, weather outlook, and today's celebrity birthdays (including Tom Hanks).

In the video, the woman suggested such murals be kept in New York. "This is not happening in my town," she said.

Get caught up with the morning's top headlines, the national weather forecast, today's celebrity birthdays and more.

Boat crumples like a wad of paper in this epic crash

Hug a tree in Israel to beat coronavirus blues

Hug a tree in Israel to beat coronavirus blues

Here’s How to Calm Down Your Anxious Pooch

Here’s How to Calm Down Your Anxious Pooch

How to Create a Sanctuary at Home

How to Create a Sanctuary at Home

Saudi military spokesman Col. Turki al-Malki displays what he describes as an Iranian cruise missile and drones used in an attack this weekend that targeted the heart of Saudi Arabia's oil industry, during a press conference in Riyadh, Saudi Arabia, Wednesday, Sept. 18, 2019. Though Yemen's Houthi rebels claimed the assault, the U.S. alleges Iran was behind it. (AP Photo/Amr Nabil)