Former President Donald Trump's lies about a stolen 2020 election united right-wing supporters, conspiracy theorists and militants on Jan. 6, but the aftermath of the insurrection is roiling two of the most prominent far-right extremist groups at the U.S. Capitol that day.

More than three dozen members and associates across both the Proud Boys and the Oath Keepers have been charged with crimes. Some local chapters cut ties with national leadership in the weeks after the deadly siege. The Proud Boys' chairman called for a pause in the rallies that often have led to clashes with anti-fascist activists. And one Oath Keeper has agreed to cooperate against others charged in the riot.

Some extremism experts see parallels between the fallout from the Capitol riot and the schisms that divided far-right figures and groups after their violent clashes with counter-protesters at the "Unite the Right" white nationalist rally in Charlottesville, Virginia, in August 2017. The white supremacist "alt-right" movement fractured and ultimately faded from public view after the violence erupted that weekend.

"I think something kind of like that is happening right now in the broader far-right movement, where the cohesive tissue that brought them all together — being the 2020 election — it's kind of dissolved," said Jared Holt, a resident fellow at the Atlantic Council's Digital Forensic Research Lab.

"Like 'Unite the Right,' there is a huge disaster, a P.R. disaster, and now they've got the attention of the feds. And it's even more intense now because they have the national security apparatus breathing down their necks," he added.

But others believe President Joe Biden's victory and the Jan. 6 investigation, the largest federal prosecution in history, might animate the militia movement — fueled by an anti-government anger.

"We're already seeing a lot of this rhetoric being spewed in an effort to pull in people," said Freddy Cruz, a Southern Poverty Law Center research analyst who studies anti-government groups. "It's very possible that people will become energized and try to coordinate more activity given that we have a Democratic president in office."

The insurrectionists who descended on the nation's capital briefly disrupted the certification of Biden's presidential win and sent terrified lawmakers running for their lives.

The mob marched to the Capitol and broke through police barricades and overwhelmed officers, violently shoving their way into the building to chants of "Hang Mike Pence" and "Stop the Steal." Some rioters came prepared with pepper spray, baseball bats and other weapons.

Members of the Proud Boys and the Oath Keepers make up just a small fraction of the more than 400 people charged so far. Prosecutors have narrowed in on the two extremist groups as they try to determine how much planning went into the attack, but authorities have said they're intent on arresting anyone involved in the riot.

More than two dozen Proud Boys leaders, members or associates are among those arrested. The group of self-described "Western chauvinists" emerged from far-right fringes during the Trump administration to mainstream GOP circles, with allies like longtime Trump backer Roger Stone. The group claims it has more than 30,000 members nationwide.

In the sustained protests last summer over police brutality, their counter demonstrations often devolved into violence. Law enforcement stepped in during a protest in Michigan. Members were accused of vandalizing property in Washington, D.C. Then, during a presidential debate with Biden, the group gained greater notoriety after Trump refused to condemn white supremacist groups and told the Proud Boys directly to "stand back and stand by."

Chairman Henry "Enrique" Tarrio hasn't been charged in the riot. He wasn't there on Jan. 6. He'd been arrested in an unrelated vandalism case as he arrived in Washington two days before the insurrection and was ordered out of the area by a judge. Law enforcement later said Tarrio was picked up in part to help quell potential violence.

Tarrio insists the criminal charges haven't weakened or divided the group. He says he has met with leaders of chapters that declared their independence and patched up their differences.

"We've been through the wringer," Tarrio said in an interview. "Any other group after January 6th would fall apart."

But leaders of several local Proud Boys chapters, including in Seattle, Las Vegas, Indiana and Alabama, said after Jan. 6 that their members were cutting ties with the organization's national leadership. Four leaders, including national Elders Council member Ethan Nordean, have been charged by federal officials with planning and leading an attack on the Capitol. One of Nordean's attorneys said he wasn't responsible for any crimes committed by other people.

The Las Vegas chapter's statement on the instant messaging platform Telegram in February didn't mention Jan. 6 directly, but it claimed the "overall direction of the organization" was endangering its members.

The Alabama group expressed concern about reports that Tarrio had previously been a federal informant. It was revealed in court records recently that Tarrio had worked undercover and cooperated with investigators after he was accused of fraud in 2012.

"We reject and disavow the proven federal informant, Enrique Tarrio, and any and all chapters that choose to associate with him," the Alabama group posted online in February.

Meanwhile, 16 members and associates of the Oath Keepers — a militia group founded in 2009 that recruits current and former military, police and first responders — have been charged with conspiring to block the certification of the vote. The group's founder and leader, Stewart Rhodes, has said there were as many as 40,000 Oath Keepers at its peak, but one extremism expert estimates the group's membership stands around 3,000 nationally.

Rhodes has not been charged, and it's unclear if he will be. But he has repeatedly come up in court documents as "Person One," suggesting he's a central focus of investigators.

Days after the election, Rhodes instructed his followers during a GoToMeeting call to go to Washington to let Trump know "that the people are behind him," and he expressed hope that Trump would call up the militia to help the president stay in power, authorities say. Rhodes warned they could be headed for a "bloody, bloody civil war, and a bloody — you can call it an insurrection or you can call it a war or fight," according to court documents.

On Jan. 6, several Oath Keepers, wearing helmets and reinforced vests, were seen on camera shouldering their way up the Capitol steps in a military-style stack formation. Rhodes was communicating that day with some Oath Keepers who entered the Capitol and was seen standing with several of the defendants outside the building after the riot, prosecutors say.

Rhodes has sought to distance himself from those who've been arrested, insisting the members went rogue and there was never a plan to enter the Capitol. But he has continued in interviews with right-wing hosts since Jan. 6 to push the lie that the election was stolen, while the Oath Keepers website remains active with posts painting the group as the victim of political persecution.

Court documents show discord among the group as early the night of the attack. Someone identified in the records only as "Person Eleven" blasted the Oath Keepers in a Signal chat with Rhodes and others as "a huge f—n joke" and called Rhodes "the dumbass I heard you were," court documents say.

Two months later, Rhodes lamented in a message to another Oath Keeper that the national team had gotten "too lax" and "too complacent." He pledged to "tighten up the command and control" in the group — "even if it means losing some people," according to court documents.

After the riot, the North Carolina Oath Keepers branch said it was splitting from Rhodes' group. Its president, who didn't return messages from the AP, told The News Reporter newspaper it wouldn't be "a part of anything that terrorizes anybody or goes against law enforcement."

A leader of an Arizona chapter also slammed Rhodes and those facing charges, saying on CBS' "60 Minutes" that the attack "goes against everything we've ever taught, everything we believe in."

The Oath Keepers' leader has also suggested the group may be facing financial pressures. In an interview posted on the Oath Keepers' website, Rhodes said it has been difficult for the group to raise money as it's been kicked off certain websites.

The group also lost the ability to process credit card payments online after the company demanded that Rhodes disavow the arrested members and he refused, Rhodes said in a March interview for far-right website Gateway Pundit. The Oath Keepers website now says it cannot accept new memberships online because of "malicious leftist attacks" and instructs people to mail in applications and dues.

A member of the Oath Keepers was the first defendant to plead guilty in the riot. Jon Ryan Schaffer has also agreed to cooperate with the government's investigation. The Justice Department has promised to consider putting him in the witness security program, suggesting it sees him as a valuable cooperator in the Jan. 6 probe.

Ala. youth ranch mourns death of 8 kids in crash

Ala. youth ranch mourns death of 8 kids in crash

Multiple people who have spoken with Trump and his team say he increasingly is acting and talking like he plans to mount a run. 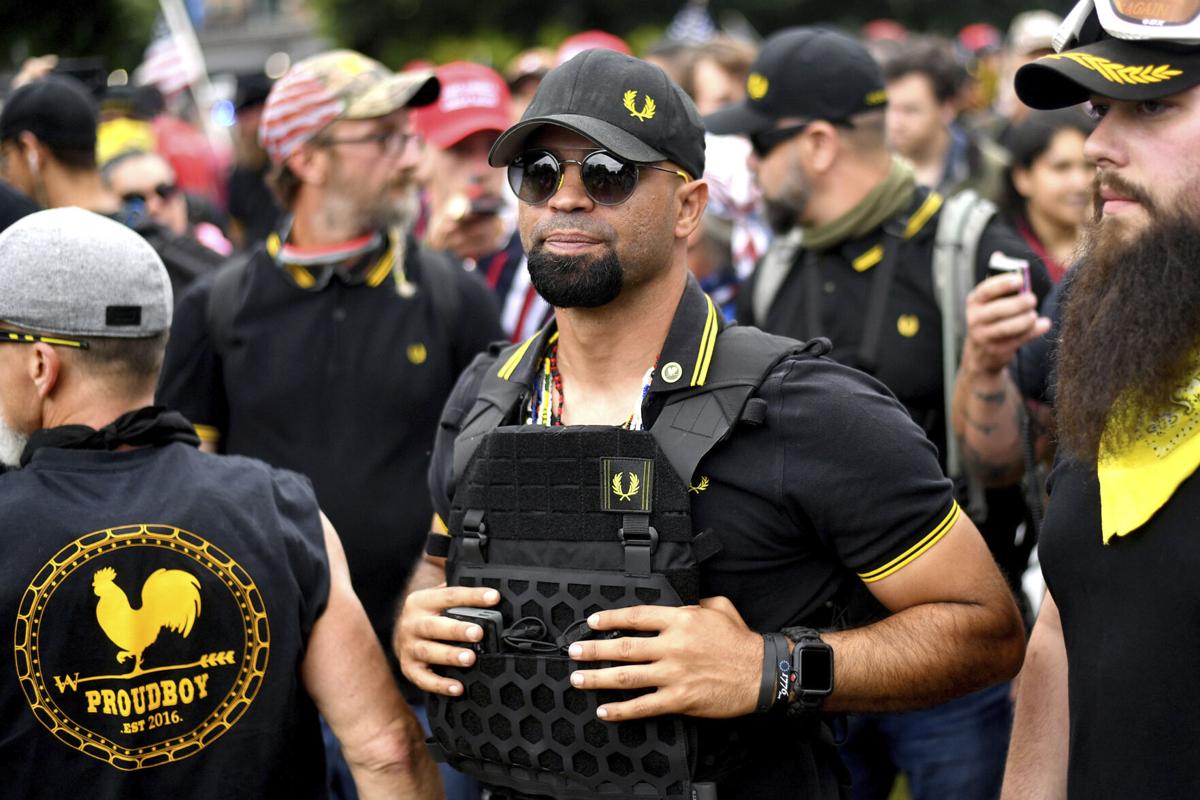 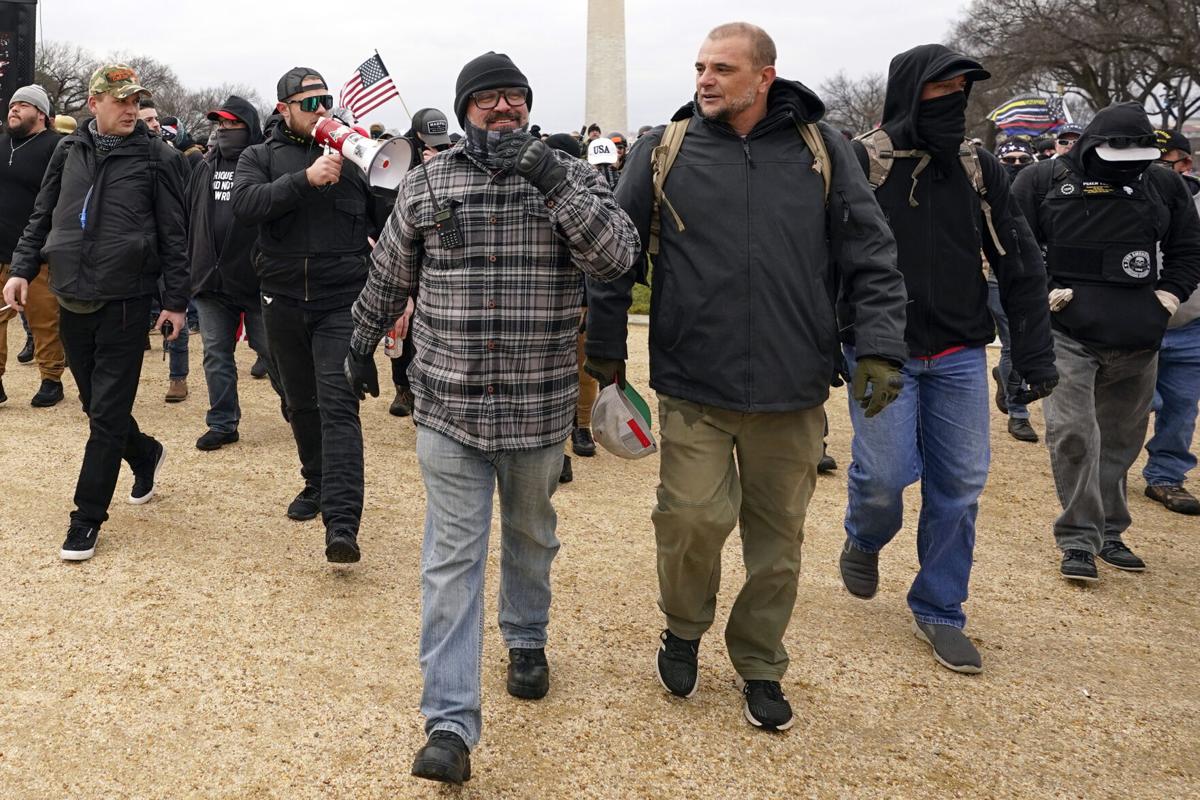 FILE - In this Jan. 6, 2021, file photo, Proud Boys including Joseph Biggs, front left, walks toward the U.S. Capitol in Washington, in support of President Donald Trump. With the megaphone is Ethan Nordean, second from left. 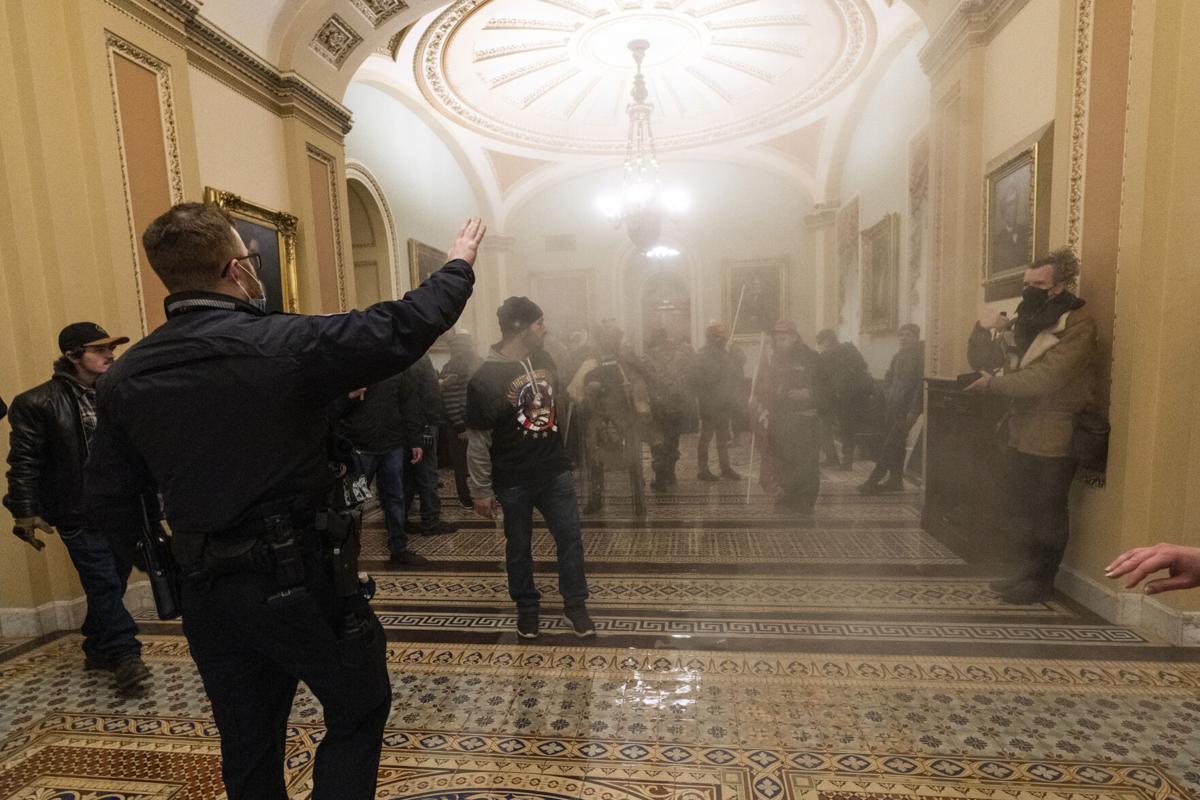 FILE - In this Jan. 6, 2021, file photo, smoke fills the walkway outside the Senate Chamber as rioters are confronted by U.S. Capitol Police officers inside the Capitol in Washington. Outside pressures and internal strife are roiling two far-right extremist groups after members were charged in the attack on the U.S. Capitol.