Woodland High School juniors Jennifer Anderson, left, and Trey Dorr Monday display a collection of photographs they helped gather in memory of Samantha Effingham, who died in a car accident on Friday. 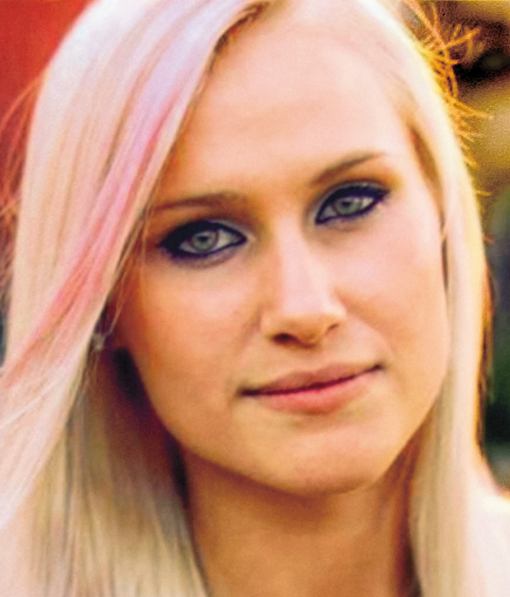 Students and faculty at Woodland High School on Monday mourned the death of senior Samantha Effingham by making picture collages and writing goodbyes on poster paper and sidewalks outside the school.

“It’s a hard day,” Principal John Shoup said. “It’s hard to carry on your normal routine because it’s there.”

Samantha died Friday in a car crash near Battle Ground.

Shoup said 30 to 40 students took advantage of the school’s “safe room” to speak counselors and share stories while writing cards to Samantha’s family. Friends and Samantha’s twin brother remembered the 17-year-old senior as a beautiful, smiley, loving, fashion-oriented and carefree person with a soft spot for animals.

“We were coming back from La Center and stopped at a stop sign and saw a kitten,” said senior Desiree Jenkins, Samantha’s best friend, recalling a recent night out with her friend. “So we all got out and pet the kitten. But then Samantha saw these horses on the other side of the fence, and she just runs over and starts petting them and feeding them and asking us to take pictures.”

Freshman Haylee Michaud, 14, remembered that Samantha, a Dairy Queen employee, gave her dog a treat at the drive-through. “She made my Blizzard that time,” Haylee said. “She always made the good ones.”

Samantha’s twin brother, Thomas Effingham, said he and his sister — the two youngest of four children — were inseparable as children. She’d often boss him around because she was the eldest — by 20 minutes. He also recalled that she usually fell asleep on the couch after Thanksgiving dinners to avoid cleanup.

“Its been easier than I thought it would be because I had all my friends around,” Thomas said about making it through the day. “I didn’t want to be at home alone.”

Samantha was a running start student at Clark College in Vancouver, but she still made time to come back during lunch to socialize with her peers “so people wouldn’t forget her,” Desiree said.

Desiree said the two planned to move in together after graduation and attend Clark College. Samantha eventually wanted to study nursing at Oregon Health and Science University.

“She liked the scrubs,” Desiree said. “She said she wanted to wear really cute scrubs and make a lot of money and help people, too.”

The Washington State Patrol continues to investigate the accident that took Samantha’s life. Ryan Matison, 20, of Battle Ground, drove his 1994 Toyota Corolla through a flashing stop sign and into a 2006 Chevrolet pickup, according to the State Patrol. Samantha was a passenger in Matison’s car. Trooper Will Finn said there should be an update on the investigation today.

Woodland High School students also have planned a vigil for 7 p.m. Tuesday at Horseshoe Lake. Faculty and family are expected to attend.

Woodland High School juniors Jennifer Anderson, left, and Trey Dorr Monday display a collection of photographs they helped gather in memory of Samantha Effingham, who died in a car accident on Friday.