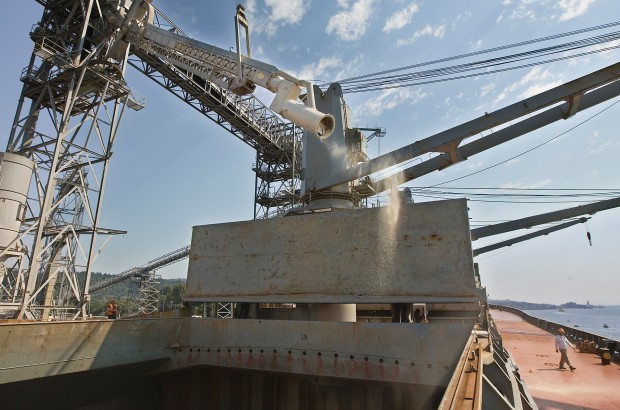 Dockworkers at grain terminals in Kalama, pictured here, and Longview have contracts. But in Portland, Vancouver, Seattle and Tacoma, where contracts expire Sunday, some ILWU members say the union gave away too much in last year’s EGT contract. 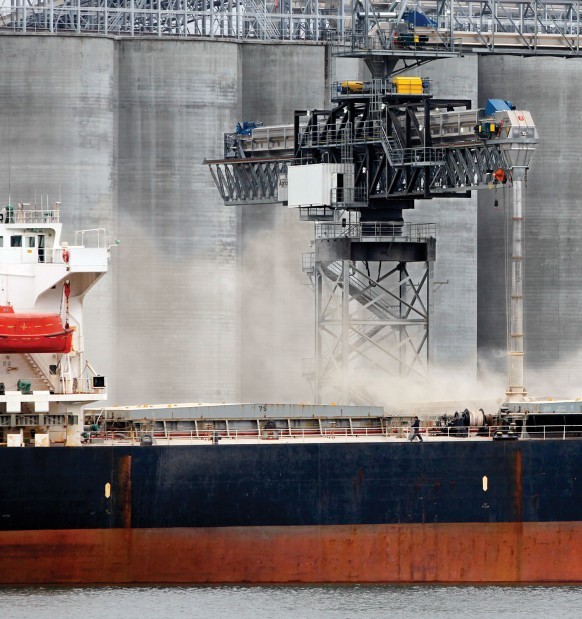 Dockworkers at grain terminals in Kalama and Longview, pictured here, have contracts. But in Portland, Vancouver, Seattle and Tacoma, where contracts expire Sunday, some ILWU members say the union gave away too much in last year’s EGT contract.

Negotiations between union dockworkers and grain handlers are coming down to the wire at six Northwest grain terminals, but local port officials say they don’t expect the labor situation to have any immediate impact in Longview or Kalama.

They’re watching negotiations between the International Longshore and Warehouse Union and the Pacific Northwest Grain Handlers Association closely, but at this point neither of the local terminals or their union workers are involved because they already have binding contracts with the ILWU, the officials said.

“As far as we know it will be business as usual at the Port of Longview,” said port spokeswoman Ashley Helenberg. “We don’t expect it will have an impact here.”

The EGT and Kalama grain-handling contracts, though, are becoming a major sticking point in the negotiations involving the Portland, Vancouver, Seattle and Tacoma grain terminals. The contracts expire Sept. 30.

Both the EGT and Kalama Export Co. contracts have workplace rules that are more “advantageous” to the terminal owners. The grain handlers association wants those same conditions so that EGT and Kalama don’t have a competitive edge.

The association represents four companies currently negotiating with the ILWU but does not negotiate for the Longview or Kalama grain terminals. The six terminals involved in the talks account for about half the nation’s wheat exports.

At least some union members, though, are balking at such requests and blasting the EGT contract specifically.

Ten retired and current ILWU members from Portland and San Francisco wrote a memo contending the EGT contract sells out union workers and shouldn’t even be applied in Longview. The memo states the ILWU is “headed in the wrong direction” and is losing hard-fought rights, including the right to strike.

The EGT contract includes a clause that says there will be no strikes or lockouts during the contract. If the union does strike, the company can demand financial damages and also can hire replacement workers during those periods. EGT also gets to hire workers in two 12-hour shifts instead of three 8-hour shifts, which would require a higher-paid graveyard shift. And, EGT gets to pick its employees from within the union, rather than have the union hall assign workers.

The union members who signed the memo say that gives EGT far too much power. They also contend the Local 21 members in Longview weren’t allowed to approve the contract and instead were bound by the international negotiating team.

Local union leaders could not be reached for comment Wednesday. International union President Robert McEllrath, in town for his Cowlitz County District Court trial from union protests in 2011, said he had no comment on the negotiations or the role the EGT contract is playing in them.

EGT officials also did not respond to requests for comment.

If the talks fall apart, union members could vote to strike, or the grain handlers could decide to “lock out” longshoremen to prevent them from going to work, union officials said. The dock workers could also agree to continue working under the old contract while the two sides continue to negotiate.

It’s unclear what sort of impact a lock out or shutdown would have on the Kalama and Longview ports and grain terminals. It’s possible more grain could be re-directed to the Longview or Kalama ports, but at this point officials said they don’t have any information about that.

“We’re not anticipating any changes,” said Lanny Cawley, director of the Port of Kalama. “Whatever happens, we’ll respond accordingly.”

At the Port of Longview, EGT would book any new grain shipments, only telling the port when more lines handling crews were needed for a new ship, Helenberg said.

“We’re keeping an eye on (the negotiations) and are hoping for a successful negotiations,” she added. “But we’re not directly impacted.”

McCormick, of the grain handlers, said he didn’t have any direct knowledge of contingency plans but said “I assume people are doing everything they can so that the grain that’s already been sold gets delivered to their customers.”

Some ports are reportedly lining up extra security in case there’s a work stoppage, but McCormick said that’s a common as a deadline approaches and that both sides are still optimistic.

“Both sides are still sitting at the table and there’s certainly a strong preference to reach an agreement,” he said.

Dockworkers at grain terminals in Kalama, pictured here, and Longview have contracts. But in Portland, Vancouver, Seattle and Tacoma, where contracts expire Sunday, some ILWU members say the union gave away too much in last year’s EGT contract.

Dockworkers at grain terminals in Kalama and Longview, pictured here, have contracts. But in Portland, Vancouver, Seattle and Tacoma, where contracts expire Sunday, some ILWU members say the union gave away too much in last year’s EGT contract.