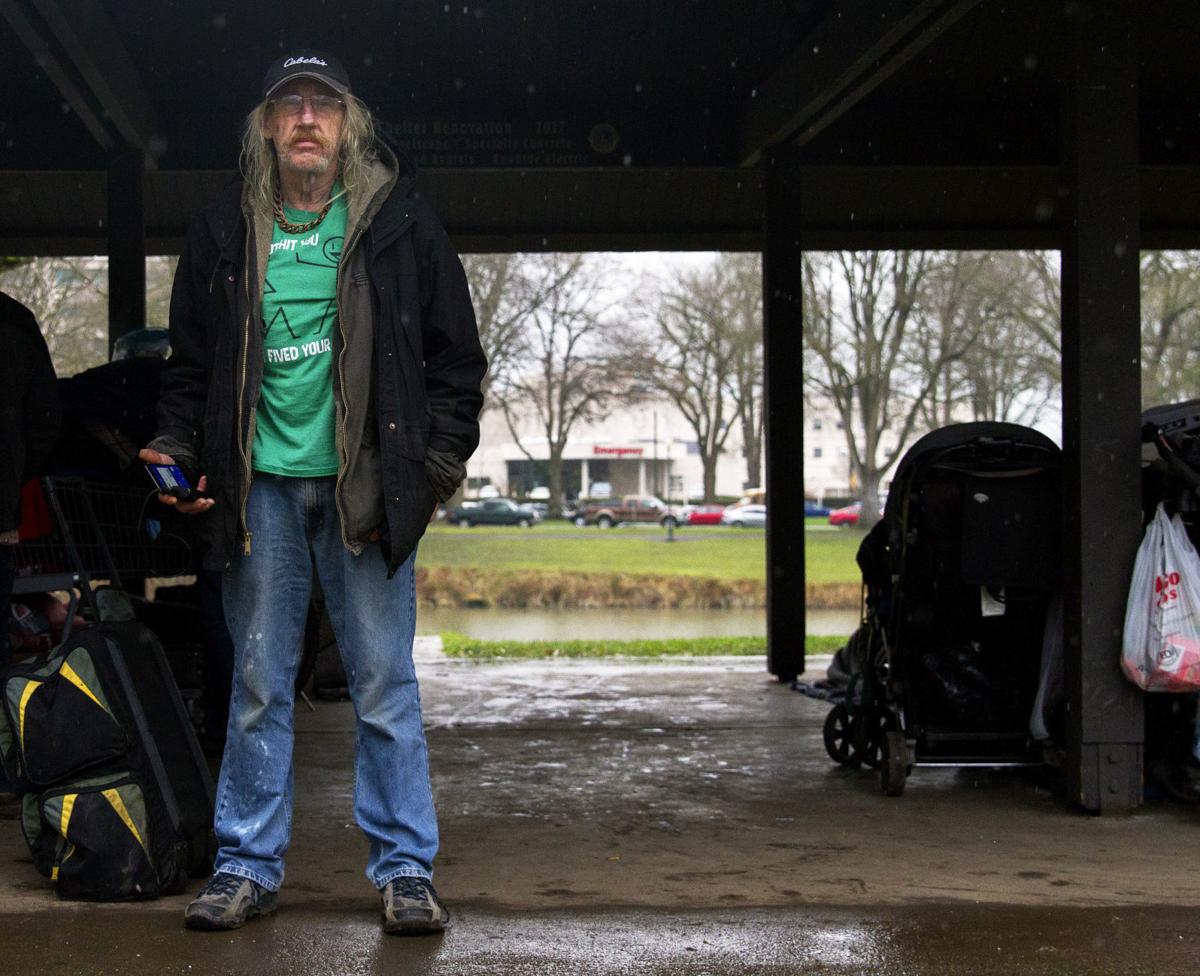 Kenny Forga stands under the Lions Shelter to stay dry at Lake Sacajawea in Longview. Forga, referred to as “Uncle Kenny” by his peers, said although he is staying with friends at night and looking for a home of his own, he often visits the homeless community at the lake to help in whatever way he can. 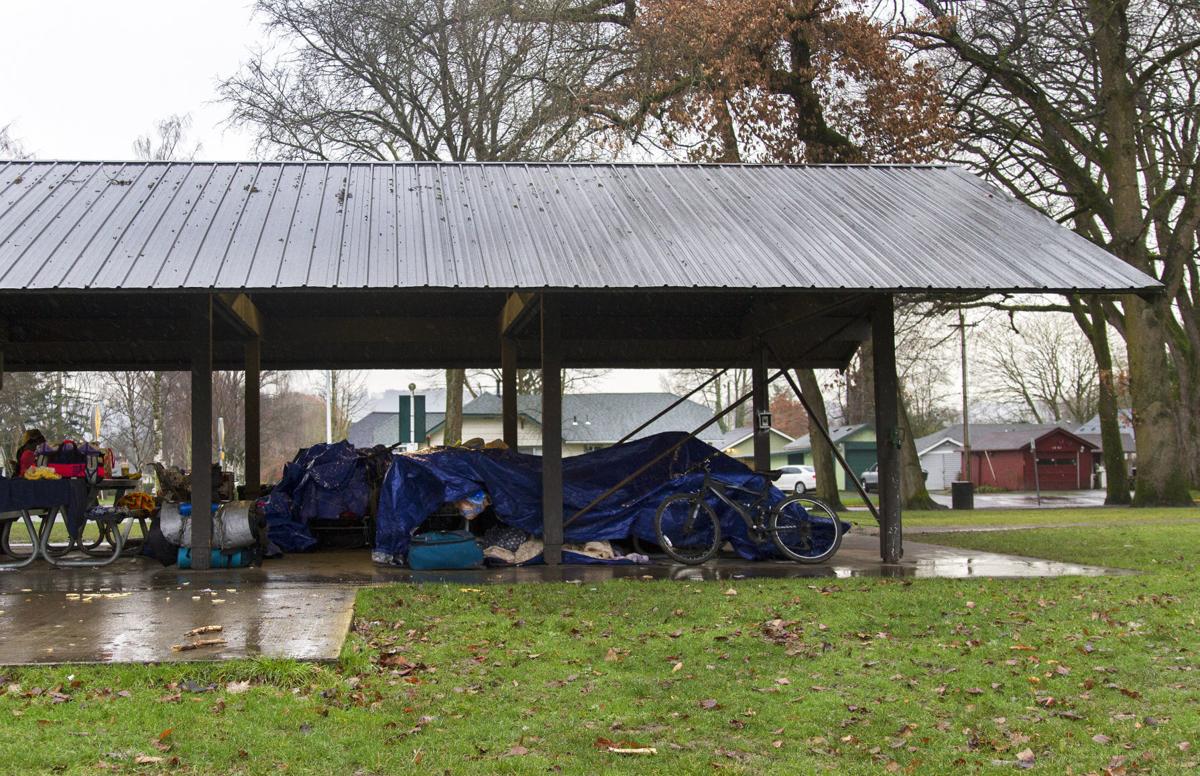 Several individuals who are homeless in the Longview area congregate under the Lions Shelter at Lake Sacajawea, providing support to each other. Every day several tarps are pitched as a means of comfort and protection from harsh weather before having to clear the area by 10 p.m. each night.

Kenny Forga listened to music on his phone while visiting the 20 or so homeless people camped out at the Lions Shelter at Lake Sacajawea on Wednesday afternoon.

Most of the group were bundled up against the elements, wearing a mix of winter gear including coats, hats, scarves and gloves. Some people sat at the picnic tables; others laid in sleeping bags on the ground; while a few hid from the rain and wind under tarps draped over the tables.

Forga and a few others were talking when a yell from a passing vehicle caught their attention: “Get a job.”

Nearly every day someone hollers something nasty at the group, Forga said. The 65-year-old has spent a lot of time at the lake over the last three months after he and others were evicted from camps in less visible areas of the city and county. Their presence at Longview’s prized park, along with the mess often left behind, has become the new focal point in the area’s struggles with its homeless problem.

They’ve been chased out of other areas, and soon they may be joined by others left homeless by a Dec. 21 fire that damaged an 11th Avenue boarding house that housed low income and mentally disabled tenants. Forga said they have nowhere else to go.

“We’re not hurting anybody. We’re just trying to survive,” he said.

About 60 people filter through the lakeside shelter during the day. Some are newly homeless, and others have been on the streets for a long time, said Love Overwhelming executive director Chuck Hendrickson. Many at the lake stayed at LO’s Kelso shelter before it closed in March 2017. The park saw an influx of people after police broke up large homeless camps in Longview’s industrial area and other locations last summer, he said.

Hendrickson said Love Overwhelming worked with the Red Cross and Lower Columbia Community Action Program to help find housing for the 30 people displaced in the boarding house fire. About 10 have not yet found a place to live, he said, and will be out on the street once the money is used up in the next couple days.

A couple of the boarding-house residents already are at the lake, Hendrickson said, and stayed at the warming shelter when it was last open.

The Longview City Council imposed an emergency curfew in all city parks on Sept. 27 in response to social-media threats against people staying at the shelter.Longview Police Cpl. Jeremy Johnson said Thursday people at the shelter usually listen to officers’ verbal warnings to leave when the 10 p.m. curfew begins. However, on Tuesday night officers gave out at least four $410 tickets due to “repeated violations,” he said.

Hendrickson said this is the first time he knows of that people were issued tickets, which “perpetuate homelessness.” Two or three more were given out Wednesday night, he said. Hendrickson said those who got tickets are meeting with lawyers.

Earlier Tuesday night on the other side of the lake, Longview City Councilman Ken Botero held a community forum at the Woman’s Club to discuss homelessness in the county and possible solutions. He said he planned the meeting for later in the year but moved it up after seeing a Facebook post about the people staying at the Lions Shelter.

Most of the discussion centered around creating partnerships between homeless people, the community and social service agencies. After the one-hour meeting, the question remained: If the community or city doesn’t want people at the Lions Shelter, where are they supposed to go?

There is no one answer to that question, said Shawn Nyman, Love Overwhelming board member. Many options need to be looked at because each person has different needs and will feel the most comfortable in different settings, she said. A shelter, group homes and assistance from churches or individuals are all options to consider, Nyman said.

“For every solution there could be a roadblock, which gets very frustrating,” she said, not only for homeless individuals but also those trying to help.

Back at the picnic shelter Thursday, a homeless woman who identified herself only as Audrey said she has hit roadblock after roadblock trying to pull herself out of homelessness. The 31-year-old said she is trying not to be a “drain on society,” but it’s hard to get plugged in to social services while staying at the lake.

“It’s a vicious cycle,” she said. “Even finding resources is difficult. If I hadn’t made friends here, I wouldn’t know about them.”

Audrey was a stay-at-home mom for years after she had her first child at 16. When she left her relationship, she had no skills and couldn’t find a job or place to live. She and her three children have been in Longview since 2017 and lived in her van after a stint at Community House on Broadway. She said her children are now living with family as she works to improve her situation.

The big problem is a lack of housing, she said. Even when she received family assistance money from the state, Audrey said she couldn’t find a place she could afford.

For Audrey and other homeless individuals, finding and keeping a job is difficult because many are sick, mentally ill or lack other basics such as clothing or transportation. Being outside all day and being preoccupied with finding a place to spend the night makes finding a job or housing more difficult, she said.

When it’s open, Love Overwhelming’s severe-weather shelter on 14th Avenue provides Audrey, Forga and others a break from the elements. It’s only open when the temperature drops below freezing and the city issues a declaration. They said it would be helpful to have the shelter open more often or have a day center.

Hendrickson said the organization doesn’t have staff or funding to keep the warming shelter going any longer, even if it had city authorization.

The nonprofit’s outreach worker meets with people at the lake nearly every day and brings people to showers, laundry services and to appointments. Local organizations Feed the Need and the Belly Brigade host regular meals for homeless people in the area.

Members of the community sometimes drop off blankets, gloves, socks, hand warmers and food. Audrey said she is grateful for the support they get, but many people also want the group to disappear.

“People here don’t want to see you, but I exist,” she said. “We don’t have anywhere to go.”

Kenny Forga stands under the Lions Shelter to stay dry at Lake Sacajawea in Longview. Forga, referred to as “Uncle Kenny” by his peers, said although he is staying with friends at night and looking for a home of his own, he often visits the homeless community at the lake to help in whatever way he can.

Several individuals who are homeless in the Longview area congregate under the Lions Shelter at Lake Sacajawea, providing support to each other. Every day several tarps are pitched as a means of comfort and protection from harsh weather before having to clear the area by 10 p.m. each night.