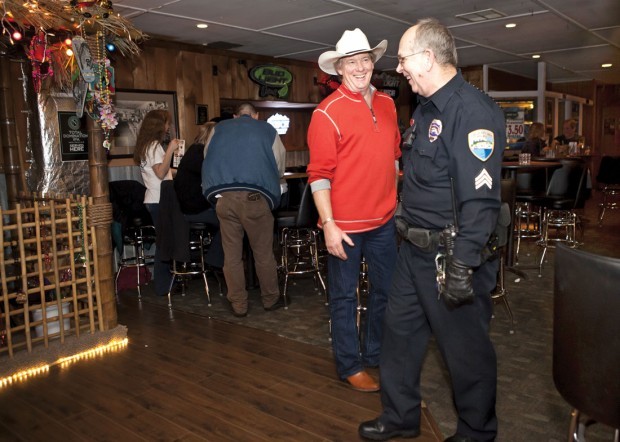 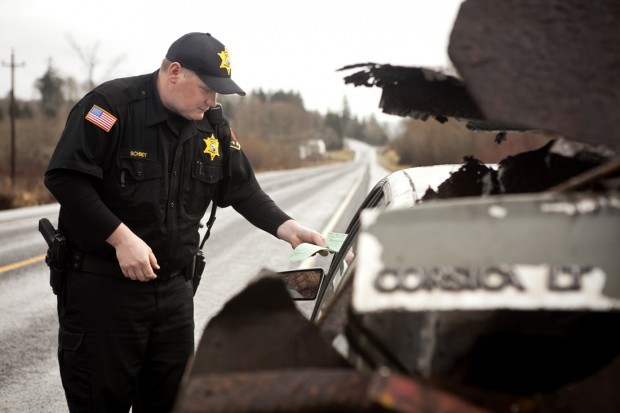 Wahkiakum County sheriff's reservist T.J. Schmidt issues a citation to a driver who was hauling a large, precarious load of scrap metal. 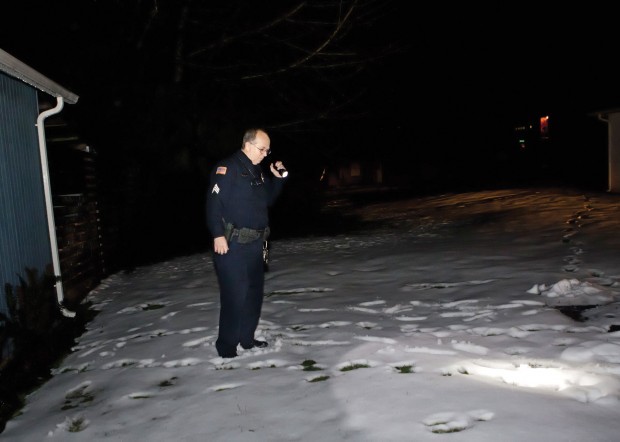 In his 26 years on the beat, Toledo Sgt. Randy Pennington has been bitten, kicked in the groin and beaten with a metal pipe. He has broken both his thumb and his leg. He's been hit by a truck.

As a member of the Toledo police force, he has arrested meth dealers, vandals and wife beaters aplenty. He also has caught stray dogs, repaired water pipes, carried groceries, changed tires, helped deliver a baby and assisted a mentally ill man who was searching for his pet dinosaur. A couple of years ago, he even was called upon to put a fatally injured owl out of its misery.

And with a few minor exceptions, he has not earned a dime for any of this. Pennington is a reservist — among the hundreds of men and women who donate their time and risk their lives as volunteer police officers and sheriffs' deputies in the state of Washington. Unpaid reserves like him are playing an increasingly important role in rural communities, where tight budgets mean law enforcement agencies are shrinking, and overtaxed police forces must cover large areas.

In cash-strapped Wahkiakum county, for example, Sheriff Jon Dearmore relies on reservists to bolster a sheriff's office he says has been stretched nearly to the breaking point. Even with his paid deputies working 20 to 30 hours of overtime each month, Dearmore says providing an adequate response to emergency calls would be nearly impossible without help from his seven unpaid reservists.

"This would be so much harder without reserve officers," Dearmore said. "It would just be brutal."

In Lewis County, Sheriff Steven Mansfield said his seven volunteer deputies have helped his department cope in straitened circumstances. Over the last three years, the Lewis County Sheriff's Office has cut seven paid deputies. "With reserves," Mansfield said, "I can ensure that everyone who calls the sheriff's office will be provided a service."

In larger communities, reservists usually act as backups, riding along with paid officers, serving papers or participating in community events. But in small rural agencies, they wear the same uniforms, perform all of the same duties and often work nearly as many hours as their paid counterparts.

Prospective reserves go through a rigorous selection process, usually at their own expense. Those who make the cut commute to an out-of-town police academy for six months, sometimes paying their own way, and then spend months or years field-training in their sponsoring departments.

"It's a huge commitment," Dearmore said. "Only people who are very serious about it do it."

Sergeant Pennington, 60, rarely takes it easy. A husband and father of five grown children who is active in his church and also serves as the fire district commissioner, Pennington works most weekend nights as a reserve police officer.

At 5 p.m. on a Friday, after finishing a day shift driving trucks for M&M transport, Pennington shoveled his police cruiser out of a bank of snow. By 7 p.m, he was in uniform, ready to begin his shift.

Country music crackled softly over the blast of the car's heater as Pennington cruised slowly through Toledo. The town, still resting under a blanket of snow, seemed tranquil. Even so, Pennington is constantly alert for trouble.

In a rural community, the area a single officer might patrol is huge.

"I'll be out 'til three or four," Pennington said. "At that hour, there might be only one or two cops in the whole county."

Pennington has developed ways to maximize his presence. Sometimes, he parks the car and walks his beat, to make it seem like there are more police on duty.

In a typical shift, a reserve officer will stick close to the town, with occasional forays to places frequented by trouble-makers: a deserted frontage road, a known drug house, a property that has been repeatedly hit by metal-thieves.

As Pennington cruised, he radioed in the plate numbers of passing cars, looking for "bad guys," as he calls them. He made few traffic stops, but he did pull over a car with a burned-out light, saying, "I wouldn't want them to hit an elk."

When things got slow, he stopped at Harry's Place to do a bar check. Patrons — including some who've had run-ins with the law — greet him enthusiastically with hugs and jokes.

Pennington said being a reservist really isn't about car chases, tickets and arrests. Good police work is about building relationships. It's about community service.

"If you think you're gonna just arrest people and throw 'em in jail, then don't become a cop," he said.

Because reserve deputies often live in the communities they serve, victims and suspects may be their friends and neighbors. This familiarity allows them to police in a more personal way, checking on women in troubled relationships, offering encouragement to people trying to get clean. But sometimes he must write tickets or arrest people he knows and likes.

"I'm not here to pick and choose," he said. "Most people understand."

‘I hope this isn't the night it comes unglued'

While budget cuts have caused several local police forces to shrink, the need for their services has grown. When times get tough, more people turn to drugs and alcohol, and as result, crime rates go up — sometimes dramatically.

In Wahkiakum County, Dearmore said, the number of mental health calls rose by 69 percent between 2010 and 2011, while felony domestic violence calls increased by 80 percent. Because these calls can be dangerous, deputies always answer them in pairs. In 2008, budget shortages forced the county to eliminate two full-time deputies, leaving the agency with five deputies. Since then, providing adequate staffing has been a constant struggle for Dearmore. Often, there are no officers on duty.

At a county commissioners meeting in January, Dearmore spoke of the mounting exhaustion his overworked deputies are feeling.

"I am starting to see some signs that they're pretty taxed, and that's scary," he told the commission. "...There are a couple of nights a week that I go to bed with a pit in my stomach, going, ‘I hope this isn't the night that it comes unglued.' "

One of the reservists who helps keep things together is T.J. Schmidt.

Like Pennington, Schmidt, 33, is a family man — a father of three young children with a full-time job as a painter at the Georgia-Pacific paper mill across the Columbia River at Wauna. He has served in the military and worked as a volunteer firefighter and EMT. After settling into work and family life, he found himself craving for a way to fulfill a "sense of duty."

Police work allows him to fulfill "a desire to serve the community — to do something bigger than myself."

Reservists are held to the same standards as their full-time counterparts. Although they can choose their hours, they are required to stay active — usually by working a minimum of two shifts a month — and must complete additional training. Both Pennington and Schmidt say they sometimes work 20 to 30 hours a week in addition to their day-jobs, and both say that this work would not be possible without the support and encouragement of their wives.

In the long run, Schmidt believes the value his work adds to his community — and the example he is setting for his children — will make the effort worthwhile.

"It does take time away from my kids, but I want to instill in them that sense of duty, of serving the community."

LEWIS COUNTY — The death of a logger killed on the job Jan. 10 in Lewis County was ruled an accident.

Wahkiakum County sheriff's reservist T.J. Schmidt issues a citation to a driver who was hauling a large, precarious load of scrap metal.