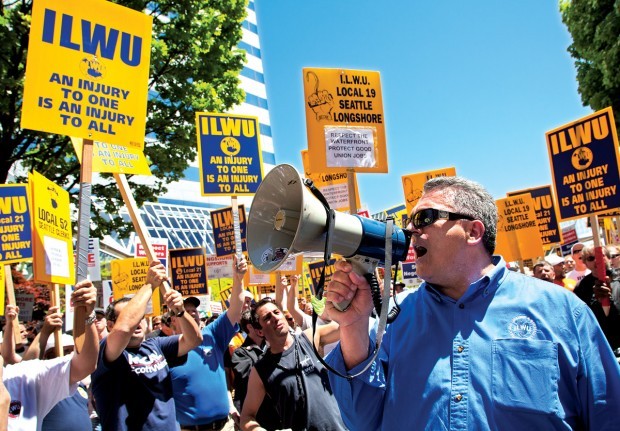 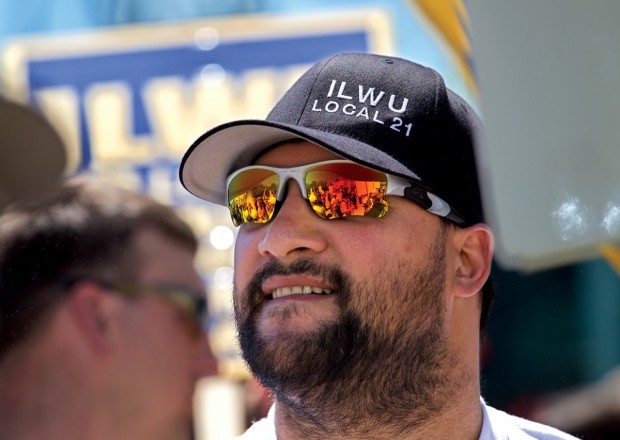 Longshoreman Kalin Makaiwi of Longview looks out over the throng of fellow union members who came to Portland to support Local 21 on Friday in Portland.

PORTLAND — More than 1,000 union longshoremen and supporters rallied outside the headquarters of grain company EGT Development Friday afternoon, demanding the company hire union labor to operate the grain terminal it is building at the Port of Longview.

The protesters traveled from as far away as Los Angeles to support Longview-based International Longshore and Warehouse local 21, which hopes to staff the $200 million grain elevator when it goes online this fall.

"We have been left out of the loop. It's total union solidarity to stop corporate greed," said Dan Coffman, president of local 21.

The stakes in this showdown are huge for organized labor. EGT is challenging one of the most entrenched and powerful unions on the West Coast. All major ports in the region operate on union labor.

The EGT elevator would be the first built on the West Coast in the last quarter century. The terminal is expected to employ about 50 workers.

Since EGT signed a lease with the Port of Longview in June 2009, port officials have maintained that union longshoremen must work the terminal under terms with the port's contract with Local 21.

"Needless to say, this is a matter of serious concern to the port," port Director Ken O'Hollaren wrote to EGT President and CEO Larry Clarke in December.

In January, EGT sued the port in federal court, arguing that the company was not bound by the port's contract with ILWU local 21, according to documents filed in U.S. District Court in Tacoma. EGT attorneys said union labor would increase their annual costs of operating the elevator by $1 million.

Port of Longview attorneys are asking Judge Ronald B. Leighton to require EGT to hire union labor. A non-jury trial is scheduled for April 2012 — months after the terminal is scheduled to start operating.

In the meantime, the ILWU is marshaling its forces for a fight. At Friday's rally, more than a dozen ILWU locals from Washington, Oregon and California were joined by union carpenters and other union trade workers. Union leaders say EGT officials are trying to undercut their right to collectively bargain, and they fear it could spread throughout the West Coast.

"Organized labor these days is under tremendous attack," said Ray Familathe, ILWU international vice president, who flew in from union headquarters in San Francisco to attend the rally.

"EGT would like to be the Walmart of the grain business and force everyone else into their agenda," said Mason, who has 75 to 100 union members working at a Tacoma grain terminal.

The protesters gathered at a nearby fountain about 11:30 a.m. in downtown Portland before marching around One Main Plaza, which houses EGT offices. Most held the familiar blue-and-yellow ILWU signs and wore union shirts. Others shook placards that read "Bunge Respect Workers Start Negotiations" and "Collective Bargaining Rights = The Right to Defend Our Families."

One longshoremen wore a shirt that said "Impeach Scott Walker," the Wisconsin governor who approved the end of collective bargaining for public employees this spring.

A security guard in the lobby of EGT's headquarters at One Main Plaza barred a Daily News reporter from going to the company's office to seek comment.

In a written statement, Clarke, EGT's president, said the company is on target to open the grain terminal for this fall's harvest. He did not address whether EGT would hire union labor.

"We are actively engaged in a process that will create steady, good-paying jobs for local workers and a safe and productive 21st century workplace when the facility begins operations this fall," Clarke said.

The Port of Longview and longshore union won an important round in their ongoing battle with the EGT grain terminal Friday, but a decision abo…

Longshoreman Kalin Makaiwi of Longview looks out over the throng of fellow union members who came to Portland to support Local 21 on Friday in Portland.
© Copyright 2020 The Daily News Online, 770 11th Ave Longview, WA | Terms of Use | Privacy Policy
Powered by BLOX Content Management System from TownNews.com.
You don't have any notifications.