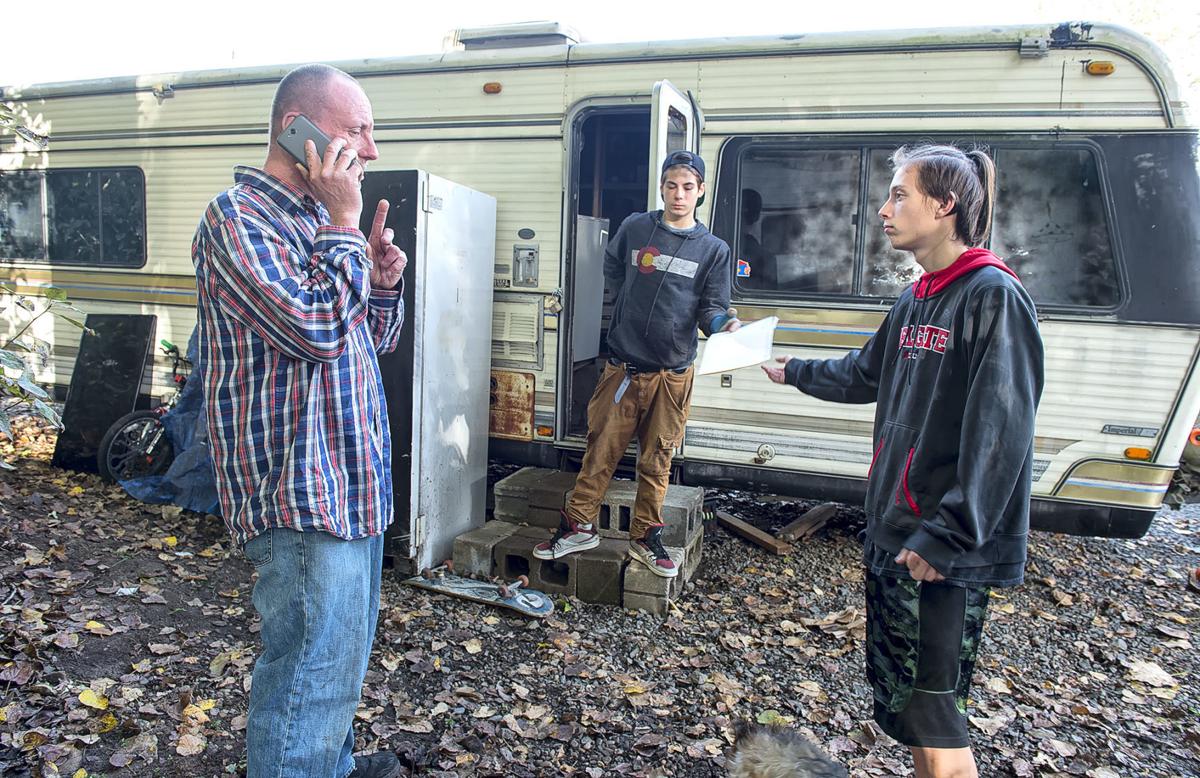 On their first day in a new RV park in Woodland, from left to right, Sean Stright, Deaus Sabol and Forest Stright are still working out details to finish their moving from Fisher Island RV Park due to the owner's lack of permits. Sean Stright said it is a bump in the road, but that they are survivors, and they will work it out. The move cost Forest his full-time job because he won't be able to get to work from Woodland.

There will be more room at the Fisher Island RV Park since a number of residents were asked to leave because the park owner did not have enough space permits.

When Bonniejean Noblin’s sister-in-law kicked her out in July with nothing more than a duffle bag of clothes and her three cats, she found shelter at Fisher Island RV Park in West Longview.

Owner Leonard Kelly let her move into an RV trailer with no down payment, she said. The ceiling leaked, the trailer didn’t have heat, and the stove wasn’t hooked up to a power source. But it was a home to Noblin.

Last Friday, she and 14 other tenants learned they had five days to move their trailers because Kelly had nearly twice as many RVs on the site as his Cowlitz County permit allowed. County Building and Planning officials were concerned that the overcrowded park could cause a septic system failure, threaten residents’ health and pollute a wetland, which Kelley was filling illegally.

“It cuts both ways: I feel bad for being angry and lashing out now because of what (Kelly) has done for me. He took (me and others) off the streets because we had nowhere else to be, and now his actions are throwing us back out there,” Noblin said Wednesday.

Kelly said Wednesday that he was trying to provide shelter for struggling people in an ever-tightening housing market.

“We just kept adding (trailers) and we kept adding, and we got in trouble. When you get three to seven calls a day from people begging for a place to stay, you try to do the right thing,” he told The Daily News.

The park was permitted for 30 spaces and a mobile home in 1996, and it was in compliance as recently as June 2017, Cowlitz County Building and Planning Deputy Director Ron Melin said Thursday.

Melin said he visited the park on Sept. 4 following a complaint from neighbors about grading and filling activity. He found that Kelly had been digging up material in the Longview diking district right-of-way at one end of the site and moving it to the other side to make space for a park expansion. But he was dumping it in wetlands without a permit, a serious environmental violation for multiple agencies, Melin said. And Kelly didn’t have any county permits for the work, so Melin posted a “stop work order” that day.

That same day, Melin said he counted about 55 RVs in the park.

“In that location, they’re right next to a very complex wetland, so there’s the potential for them to overload their septic system. If that fails, not only is it going to be a bad situation health-wise for the people living there, but also for the environment. It’s kind of a big deal,” Melin said.

On Sept. 13, the county sent Kelly a letter saying he had one month to reduce the number of RVs on the site down to 30, Melin said. When he returned on Oct. 15, Melin said he found 54 RVs.

“Our code gives us no choice but to start issuing citations,” Melin said.

He cited Kelly three days in a row when the number of RVs did not significantly decrease. Each citation can include a fine of up to $1,000, but a judge will ultimately decide the amount, he said.

“I know Leonard’s heart is in the right place, (trying to address) the whole lack of affordable housing,” Melin said. “But at the same time, we have to be lawful about it.”

Despite the Sept. 13 warning letter, Kelly didn’t tell tenants they were going to be relocated until Oct. 26, saying he was hearing conflicting things from the county and the Longview diking district, which owns much of the land the park is located on at 5558 Willow Grove Road. (Residents pay $500 or $750 a month, depending on whether they own or rent their trailers.)

Kelly said he asked the county for more time to relocate tenants but was told he needed to be in compliance by Nov. 1. So, on Wednesday morning he started moving trailers out of the park.

Tenants who received relocation notices said they were chosen because they weren’t served by septic hookups. A park employee has been emptying the waste storage tanks of those trailers a few times a week and pumping the waste into the park’s septic system through a different trailer’s hook-up. Many of these residents had been in the park less than a year.

Kelly said he is helping transport trailers to different parks in the county and even giving way trailers to some people.

“They’re very upset they have to relocate because they were happy there. They’re going to blame anybody they can. I have done nothing but bend over backwards to help these people live,” Kelly said.

Tenant Sean Stright said he, his 16-year-old son and his son’s friend, who all lived together at the RV park, were awakened at 7:30 a.m. Wednesday and told by Kelly that they were moving to a park in Woodland. They had been told they had until 3 p.m. that day to pack-up and tie-down everything in their trailer.

The three of them had moved to Longview from Seattle in June to escape gang activity. They were living at the Community House on Broadway shelter in Longview when Kelly let them move into an RV without paying a deposit.

They spent the summer fixing up the RV with what they earned building manufactured houses. Stright’s son earned his GED over the summer and his friend will take the final test in the next few weeks.

“This town is very giving and very understanding and very open,” Stright said Thursday. “I’m upfront with everyone. I used to be bad but now I’m not. They’ve accepted that and we’ve moved forward.”

But now they have to start anew once again, and their new place in Woodland doesn’t have laundry, showers or electricity. Stright said he will likely have to buy a gym membership somewhere so they can take showers.

Kelly bought them a generator for electricity, but they have to fill it with 4 gallons of gas every day to make it run, Stright said. Without a car, Stright has to walk four miles to downtown Woodland or four miles to the Walmart to purchase whatever he needs.

Noblin said she has lost 40 pounds due to stress and expenses during her time in Fisher Island. Kelly said she could keep the trailer she was living in, she said, but she doesn’t have a title to the RV and she didn’t know where she was going to be moved.

“I haven’t chewed my nails in years, and now they’re nearly bleeding,” she said, holding out her hands.

Michael Johnson, who has lived at Fisher Island for about four months, said he understands the difficult position Kelly is in, but he said tenants should have been given more than five days to move. He plans to stay in the park as long as he can.

“It’s illegal what he’s doing. It’s a scare tactic to see who will budge,” he said.

Kelly has started the county permitting process to add about 17 additional spaces and a parking area, Melin said, but it is still early in the review process. An expansion would likely require a redesigned or expanded septic system, he said.

The wetland fill and the grading is still an active investigation with multiple agencies involved, and the saga has left some residents conflicted about Kelly’s motives for renting more spaces than he was supposed to.

“Just because you’re getting help, doesn’t mean it’s good help. Yes, he did help us. But in a way, he kind of preyed on us. He knew we were desperate.”

Kelly, though, said he had good intentions.

“These people deserve to have a better place to live in, and I was trying to give them that. Sometimes people get shuffled the side and it’s not their fault.”

Rooster will appear in court after killing owner during illegal cockfight

Deal reached to get Calif. kids back in classrooms

Deal reached to get Calif. kids back in classrooms

During Dian Cooper’s first month as Cowlitz Family Health Center CEO in 1982, every minister in town opposed to abortion walked into her offic…

For the past 66 years, classrooms in the old Kalama elementary school have been filled with books and math worksheets, but last week those wer…

On their first day in a new RV park in Woodland, from left to right, Sean Stright, Deaus Sabol and Forest Stright are still working out details to finish their moving from Fisher Island RV Park due to the owner's lack of permits. Sean Stright said it is a bump in the road, but that they are survivors, and they will work it out. The move cost Forest his full-time job because he won't be able to get to work from Woodland.

There will be more room at the Fisher Island RV Park since a number of residents were asked to leave because the park owner did not have enough space permits.