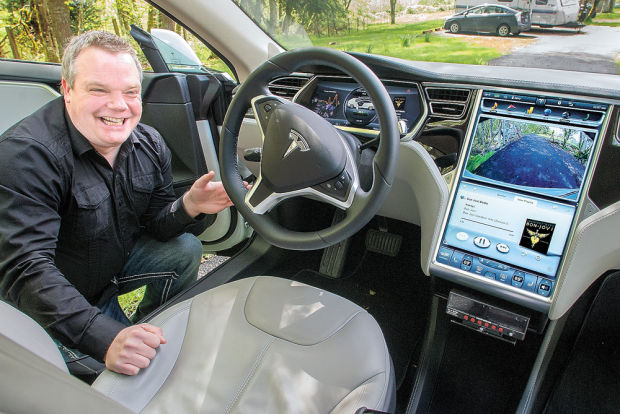 A high-end Tesla taxi, right here in Longview, is ready for riding through EcoCab, a young electric-car cab company run by Ron Knori. 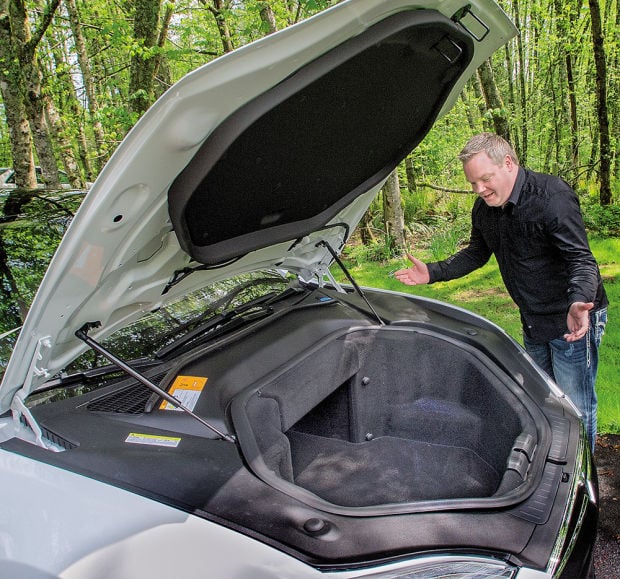 Ron Kanri shows off the Tesla's storage space under the hood.

The future is fast and quiet, and it’s already here on the streets of Longview.

Looking like a concept car in a major auto show, the Tesla Model S is no unassuming presence. The slick silver curves, 17-inch touch-screen panel and the nearly silent but rocketlike thrust make it worthy of Monte Carlo.

But here, it’s a taxi cab. Make that among the first in a wave of electric Tesla taxis, run by Longview’s own EcoCab.

The eco-friendly cab company has been a successful business since early 2012, and a Tesla expands its range and adds the luxury other electric vehicles lack.

“We wanted something that people will want to go out in, something nice – not that our other cars aren’t nice,” owner Ron Knori said.

The high-end car comes as an addition to his fleet of two Chevy Volts and two Nissan Leafs, both with ranges much lower than Tesla’s 250 miles on a single charge. Customers can now get to either Seattle’s or Portland’s airport and back without a single tailpipe emission.

And although a customer can request the Tesla specifically, it goes for the same rate as the Volts and Leafs.

“We wouldn’t want to charge more for the car we’re using the most,” Knori said.

Tesla Motors arose about a decade ago from the mind of Elon Musk, founder of PayPal, SpaceX and other world-changing inventions. The fully American-manufactured cars have muscle and style, not to mention an infinite jukebox accessible from the car’s 3G connection.

Though the Model S cost $95,000 as Knori had it equipped, he penciled out a 30 percent savings in fuel and maintenance costs over eight years, or the million miles expected in that time.

To get totally off the grid, Knori also plans to invest in solar panels to charge the cars – panels from another Musk company, SolarCity.

Though it was an experiment to install a meter in the Model S, Knori knew the car would be more than worthy – he drives one himself.

“I’d be kind of a hypocrite if I drove a gas-powered vehicle around,” he said.

EcoCab hopes to have a second Tesla in its stock by September.

Taking the future further, Knori plans to take his “best and brightest” drivers and set up shop in Portland, with an initial fleet of 15 Teslas with room to add up to 200. He’s in the permitting process with the city now and hopes to start up there next year.

“This is going to revolutionize the way cabs are done all over the world,” Knori said. “…And we’re like the guinea pigs in the taxi industry on this.”

• Former Longview psychiatrist Dr. Leland W. Dennis, M.D., will retire May 30. Now living in Elk City, Okla., Dr. Dennis is a mental health therapist and psychiatrist licensed to practice in Oklahoma. He received his medical degree from the University of Oklahoma College of Medicine.

• PT Northwest has expanded its hours. The physical therapy and massage therapy clinic will now be open from 8 a.m. to 8 p.m. to better serve a working population. The office can be reached at 423-9535.

Brooks Johnson covers Longview city government for The Daily News. Reach him at 360-577-7828 or bjohnson@tdn.com.

The body pulled from Lake Sacajawea on Wednesday in Longview was a Kelso man who died of drowning, officials say.

One of the movies that debuted at this year’s prestigious Sundance Film Festival has a Longview connection behind the scenes.

A man who coached children at a Longview boxing club has been arrested three times in the last three months for suspicion of domestic violence.

KALAMA — Officers are looking for a woman suspected in vandalizing and stealing items from the Port of Kalama at night.

Biden: US troops won't be moving into Ukraine

Biden: US troops won't be moving into Ukraine

What are these weird looking 'spider formations' that were spotted on Mars?

What are these weird looking 'spider formations' that were spotted on Mars?

A high-end Tesla taxi, right here in Longview, is ready for riding through EcoCab, a young electric-car cab company run by Ron Knori.

Ron Kanri shows off the Tesla's storage space under the hood.